EU rallies to save Merkel: Bloc tells members to crack down on asylum seekers moving through Europe as German chancellor faces revolt over migrants

The EU has rallied to save Angela Merkel after a draft statement told members to crack down on asylum seekers moving through the bloc.

German Chancellor Merkel is facing a battle to cling onto power after her coalition partners threatened to start turning away migrants already registered in other EU states.

The Christian Social Union party yesterday delayed ordering the measure, instead giving Merkel two weeks to convince European powers to come up with a solution to the migrant crisis.

Today, an EU draft statement emerged, apparently in response to the ultimatum, which appeared to signal a crackdown on migrants making ‘secondary movements’ across the continent.

The document, seen by Reuters says ‘…secondary movements of asylum seekers between Member States put the integrity of the Asylum System severely at risk. Member States should take all necessary internal legislative and administrative measures to counter such movements and to closely cooperate amongst each other to this end.’ 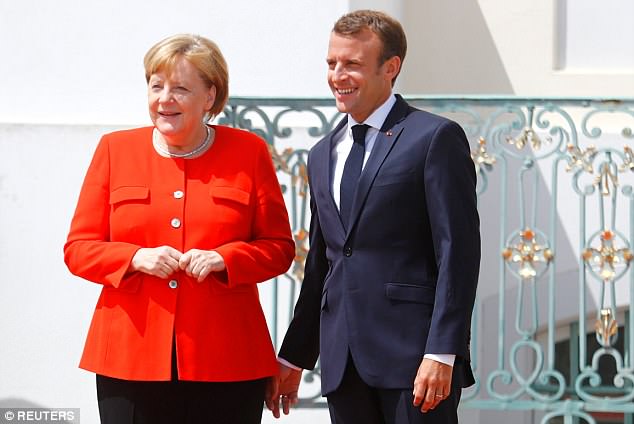 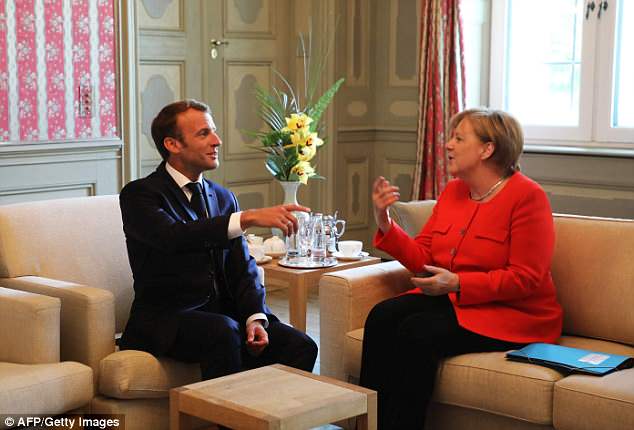 German Chancellor Merkel (right, with Macron today) is facing a battle to cling onto power after her coalition partners threatened to start turning away migrants already registered in other EU states

The EU will also agree next week to look into setting up ‘regional disembarkation platforms’ to decide on asylum requests before the claimants actually get to Europe, a draft statement of the leaders’ summit next week showed.

Such centres could be set up in regions such as Northern Africa, said officials who discussed the document, which is not public but was seen by Reuters before the June 28-29 EU summit.

‘Such platforms should provide for rapid processing to distinguish between economic migrants and those in need of international protection, and reduce the incentive to embark on perilous journeys,’ the draft joint statement of all 28 EU leaders said, though its wording may still change.

She and Macron, the leaders of Europe’s biggest economies, will seek to thrash out a compromise between Macron’s bold vision for sweeping EU change and Germany’s stance that is more cautious, especially when it comes to finance.

Merkel and Macron have both stressed that, as US President Donald Trump openly challenges the EU with a trade war and over security and climate policy, the bloc must learn to stand its ground on the world stage.

The ministerial retreat at Meseberg castle near Berlin aims to hammer out a joint Franco-German stance ahead of a June 28-29 summit on the EU’s post-Brexit future, at a time when populists and eurosceptics are rapidly gaining ground.

As outspoken pro-Europeans, Merkel and Macron both face harsh opposition from nationalist and right-wing populist forces at home, and in the governments of Italy, Austria and several eastern European countries.

The question of how many migrants the bloc can absorb came back to the fore strongly when last week Italy and Malta both turned back a rescue vessel carrying 630 refugees, which was eventually accepted by Spain.

The move sparked a clash between France and Italy as immigration also triggered a domestic crisis for Merkel, a leader already weakened by her decision in 2015 to keep open German borders to a mass influx of more than one million refugees.

Merkel now faces a dangerous mutiny from her hardline Bavarian Interior Minister Horst Seehofer, who has vowed to defy her and order police to shut German borders to most asylum seekers by early July if there is no EU accord. 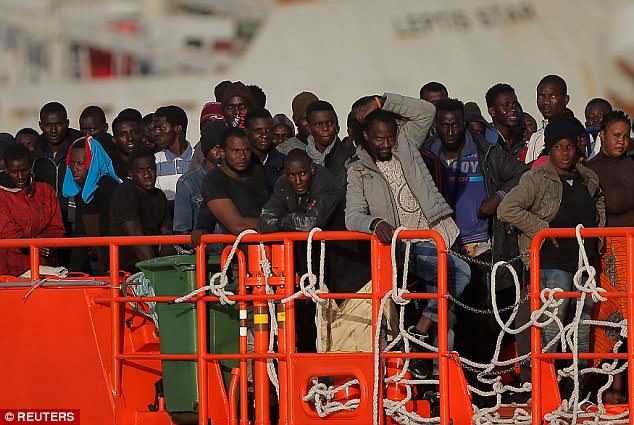 The question of how many migrants the bloc can absorb came back to the fore strongly when last week Italy and Malta both turned back a rescue vessel carrying 630 refugees, which was eventually accepted by Spain. Pictured: Migrants arrive in Malaga, Spain on board a rescue vessel yesterday

Merkel, arguing that the issue must be resolved at the EU level, has pledged to reach deals with transit and arrival countries in the narrow two-week window ending with the Brussels summit.

‘Turning away migrants at our borders at the heart of Europe will lead to negative domino effects that could hurt Germany and put into question European unity,’ she warned Monday.

Trump chimed into the debate with a Twitter taunt, charging that ‘the people of Germany are turning against their leadership as migration is rocking the already tenuous Berlin coalition’.

Merkel and Macron agree that overburdened Mediterranean countries need financial support or incentives, and that the EU’s Frontex border force must receive more funding, while Paris also advocates the creation of asylum processing centres in Africa.

While migration looked to be the most urgent issue, a host of other tricky topics were on the agenda Tuesday – from eurozone finance and investment to common defence.

Macron last year outlined his vision for a stronger, more united Europe as a forceful reply to the far-right and isolationist National Front he defeated at the polls.

But he was long left waiting for a response from Berlin as Merkel, weakened by poor September election results, was occupied by half a year of arduous coalition talks.

When she finally gave a reply several weeks ago, it fell short of many of Macron’s core demands.

She dashed Macron’s hopes for a joint eurozone finance minister and budget, mindful of German public fears that their tax money be squandered on what voters see as fiscal irresponsibility in southern EU states.

The Elysee Palace said Monday it hoped for ‘a substantial agreement’ with Berlin on reform of the 19-member common currency area, with a specific budget on a ‘safety net’ to save banks in trouble.

Merkel has agreed on a common investment budget for the bloc, but says it should be worth several tens of billions of euros, not the hundreds of billions suggested by Macron.

Paris and Berlin are also discussing ways to turn the European Stability Mechanism into a more potent firefighter and lender for troubled economies, akin to a European version of the International Monetary Fund.

France and Germany may also strike a deal aimed at harmonising corporate taxes across the bloc, to stop multinationals from taking advantage of low-tax regimes in for example the Netherlands, Ireland or Luxembourg.

On common defence, Merkel has said she is ‘favourable’ to Macron’s demand for a rapid reaction force dubbed the European Intervention Initiative.

But they differ on its make-up, and Merkel faces the restraint that the German parliament must debate and vote on any military mission abroad.