Bodies are piling up on hospital wards in Romania in just the latest dark episode of Europe’s rapidly worsening winter Covid crisis.

Bucharest’s main hospital morgue is now almost three-times over-capacity, it has been revealed, with nurses saying that ‘whole families’ have been sent to their graves in recent weeks as cases and deaths soared.

The situation is improving after Romania – which has one of Europe’s lowest vaccine rates at 38 per cent – went into partial shutdown in late October, but morgues are still working overtime to clear the backlog.

Meanwhile liberal schools in Germany whose adherents believe diseases are challenges to be overcome naturally have been blamed for worsening outbreaks in the country’s hard-hit southern regions.

It comes after an outbreak of Covid at a Steiner school, whose attendants adhere to ‘anthroposophical’ teachings of Rudolf Steiner – including that children should be taught to paint before they can speak be allowed to learn at their own pace. 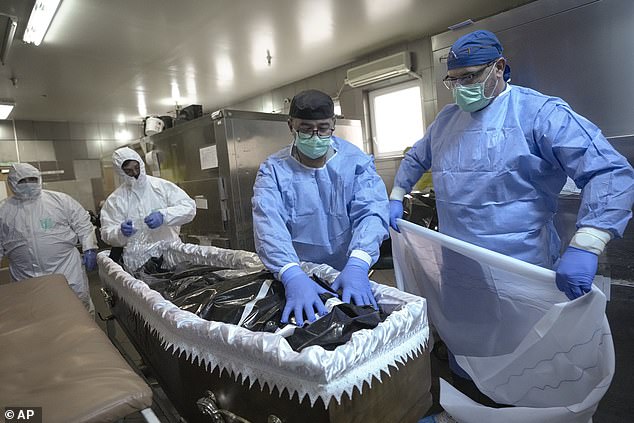 Romanian morgues are now full to overflowing with the bodies of Covid patients, after the country – which has one of Europe’s lowest vaccine rates – was hit hard in a recent wave 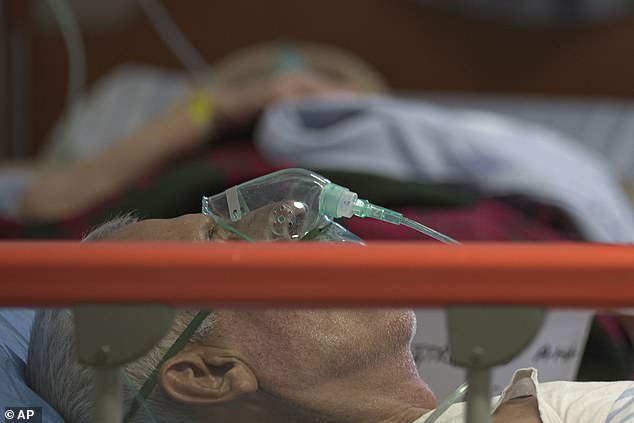 Romania’s Covid infections and deaths are now falling after it went into partial shutdown and introduced vaccine passports, but morgues are struggling to catch up (file image)

Tobias Rapp, a writer for Der Spiegel who once attended a Steiner school, said the schools are their attendants are not outwardly anti-vaccine.

But he added that believers in Steiner’s teachings often see vaccines as interfering in the body’s connection with nature and will shun medical treatments in favour of more natural remedies.

Steiner schools – which also exist in the UK and charge up to £10,000-per-year for a place – have in the past been at the centre of measles outbreaks.

After a Covid outbreak at one school in the city of Freiburg in October, inspectors found 55 teachers and students were carrying certificates claiming they were exempt from wearing masks – only three of which were found to be valid.

The morgue has capacity for 15 bodies, but on the day reporters attended 41 had arrived, with almost every bed in the hospital’s expanded Covid ward also filled.

Claudiu Ionita, a nurse who spoke to the outlet, said: ‘I never thought such a catastrophe could happen, that we’d end up sending whole families to their graves.’

Romania was among the first EU countries to get hammered with a winter wave of Covid thanks to its low vaccination rate, which stands at just 37 per cent.

Only one country – Bulgaria – has a lower double-jabbed rate, at 25 per cent.

That forced the government to impose a night-time curfew and make Covid health passes mandatory for access to all indoor spaces, with Interior Minister Raed Arafat saying at the time that the country was in a ‘disaster situation’.

‘We are in this situation while having the vaccine, because the majority of us refused to get inoculated. This situation could have been avoided,’ he fumed.

Europe is currently getting to grips with a rising winter wave of virus infections, which has been dubbed a pandemic of the unvaccinated.

In response, leaders have mulled the idea of making jab compulsory – with Austria becoming the first country to do so last week.

The move is now being consulted with lawyers, and a final decision is due by February next year. In the meantime, the country had gone back into full lockdown.

Germany has also been considering whether to make jabs necessary, but health minister Jens Spahn on Tuesday spoke out against the move – saying it is too late to help with the current wave of infections.

‘The effect would come too late,’ Spahn told reporters today, saying that what is needed is to ‘reduce contacts and act as a unified state’.

As he spoke, a survey of Germans found that 70 per cent now believe that lockdown restrictions will be put in place before Christmas.

Meanwhile ministers met in Italy to begin discussing what measures the country should take against its own growing outbreak ahead of an emergency degree to be published later this week. 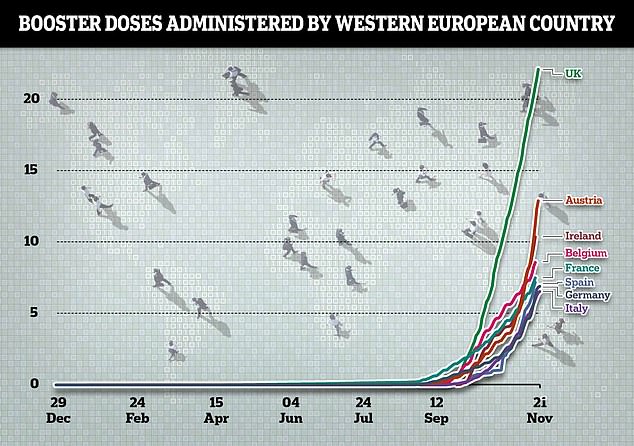 The UK’s booster drive has steamed ahead of others on the continent. More than 20 per cent of Brits have now got a booster, which is almost double the level in Austria 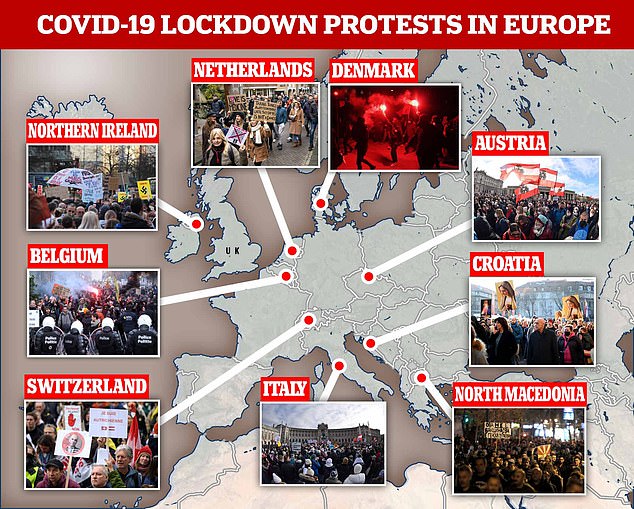 A new wave of Covid lockdowns to tackle rising infections has sparked protest across Europe, as people accuse their governments of turning into tyrants

The idea of a nationwide vaccine mandate has been put on the table, Corriere reported. Carlo Bonomi, head of the Italian federation of industry, and Maurizio Landini, boss of one of the country’s biggest unions, are said to be in favour.

But others are urging caution, saying only some professions such as teachers and shop workers should be mandated initially – with a general mandate rolled out only in areas where infections are high.

The officials met for talks as the South Tyrol region, on Italy’s northern border with Switzerland, imposed a night-time curfew as cases soared.

Meanwhile in Ireland, where a night-time curfew has also been put into effect, GP Daragh O’Neill told the Irish Times that the situation in the country is ‘frightening’.

He put high Covid numbers in his region – Drogheda, north of Dublin – down to the relaxing of virus restrictions and said pressure on GP services is now the highest he has seen for 25 years.

‘It’s quite a frightening time to be a GP. This is as bad as I’ve ever seen it,’ he said.

Elsewhere, the European Medicines Agency says it is evaluating whether to authorize booster doses of Johnson & Johnson’s single-shot COVID-19 vaccine.

In a statement Monday, the EU drug regulator said it was considering an application from J&J to recommend booster doses of the J&J vaccine for adults 18 and over, at least two months after they were first immunized. 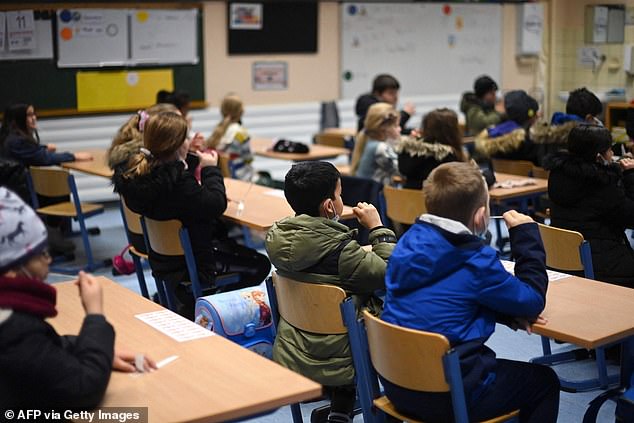 Children are pictured in a German state school, after attention was thrown on private Steiner schools for helping fuel the outbreak with vaccine-sceptic beliefs 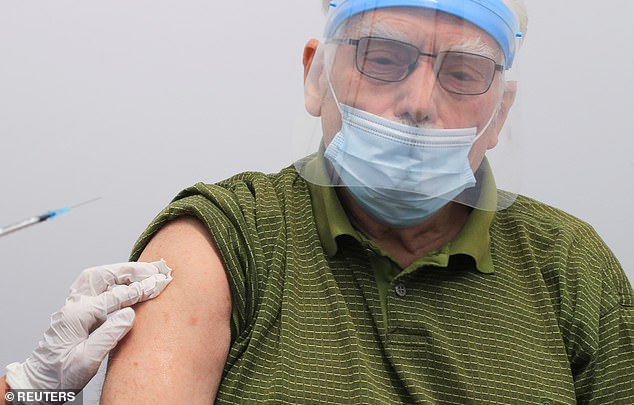 Germany is considering introducing mandatory vaccines, but the health minister today warned it will come too late to combat the current wave

Amid an explosive surge of new coronavirus infections across Europe, the EMA said it expected to make a decision on this within weeks.

The U.S. Food and Drug Administration gave the green light to J&J booster doses in October, both for people who initially received the J&J and vaccine and for people who got immunized with other vaccines.

J&J earlier presented results from a large study that found giving a second dose just two months after the first bumped protection against symptomatic COVID-19 to 94% from 70% in U.S. recipients.

Giving that booster six months later instead prompted an even bigger jump in virus-fighting antibodies.

EU countries initially ordered about 200 million doses of J&J’s vaccine, but only a fraction have been delivered after the company has faced repeated production problems.

The EMA has previously said its 27 nations could consider administering booster doses of vaccines made by Pfizer-BioNTech and Moderna for people who had received the two-dose regimens at least six months before, noting that a third shot would provide additional antibodies against COVID-19.

The agency is expected to decide later this week on COVID-19 vaccines for children aged 5 to 11.