Victoria's coronavirus restrictions are set to be relaxed earlier than anticipated and primary school students will be back in the classroom sooner under the government's revised lockdown plan.

But for those who break the newly relaxed set of rules, the penalties will be tougher, with fines of almost $5000 in place for illegal gatherings – more than the fine for first-time drink-driving and more than triple the previous amount. 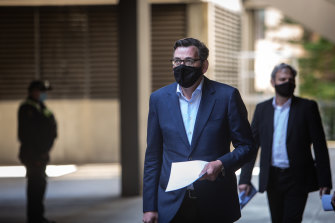 While announcing the latest phase in the easing of restrictions on Sunday, Premier Daniel Andrews also confirmed the axing of Melbourne’s controversial 9pm-to-5am curfew, which faced a Liberal-backed legal challenge in the state's Supreme Court on Monday morning.

Mr Andrews said the government's only consideration in moving to the next step in the easing of coronavirus restrictions would be case numbers, with metropolitan Melbourne on track to reach its next target of fewer than five cases per day some time in October.

"We believe we will be able to take that important step on the 19th of October," the Premier said at his 87th consecutive daily press conference, adding the government would wait at least three weeks between each step. "We are so close, so, so close to beating this thing."

The announcement comes after a week in which Mr Andrews lost his fourth minister in a year with the resignation of health minister Jenny Mikakos, who quit after the Premier gave evidence to the state's hotel quarantine inquiry saying she was responsible for the botched system that led to the state's devastating second wave of coronavirus. 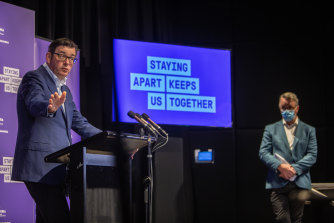 Melbourne’s controversial curfew, which was set to be debated in a Supreme Court case from Monday, will lift but the five-kilometre limit on movement will remain in place.

Murdoch Children’s Research Institute modelling prepared for the government suggested the risk to students is probably lower than previously estimated, meaning the government will allow all primary school students to gradually return to campus from October 12 – an advancement on previous plans for only prep to grade 2 and VCE students to come back.

Aspiring Liberal MP Michelle Loielo’s case against the government’s 9pm curfew was scheduled for the Supreme Court on Monday, where she intended to argue it was disproportionate and violated Victorians’ human rights.

Three weeks after sparking controversy around the curfew by admitting it was not his idea, Chief Health Officer Brett Sutton on Sunday announced he did not believe the curfew was proportionate.

"If you take today’s 16 cases, 15 of them are linked to known cases, clusters and outbreaks … that is a very different situation to where we have been in recent weeks," he said.

"We always said that aged care cases would be a stubborn tail of this epidemic curve. That remains the case … and a curfew doesn’t address that transmission risk, obviously."

Professor Sutton said the curfew would be replaced by a fine of almost $5000 for illegally gathering.

Comparatively, first-time drink-driving offenders receive a fine of up to $3200, while speeding more than 45km/h over the limit attracts an $826 fine.

"Given where we’re at, I think having the curfew was eroding public trust," he said.

Epidemiologists earlier this month warned the government should not keep Melbourne under tight restrictions because of outbreaks in aged care and healthcare settings.

The Premier announced that the lifting of limits on workplaces will mean 127,000 Melburnians can return to work from Monday.

Supermarkets and food distribution centres will return to full capacity, while abattoirs – the site of multiple large outbreaks in Victoria – will increase "in line with levels we know are safe". Sole traders doing gardening can return to work and outdoor pools will reopen from Monday. Golf courses will stay shut until at least October 19.