A family-run warehouse in Baltimore could prove the unlikely key to bringing about an end to the Covid pandemic that has so far claimed nearly 1.5million lives worldwide.

Pfizer called Capitol because it was on the hunt for the quarter-inch pellets it spits out of a machine resembling a giant spaghetti maker in its Baltimore warehouse. 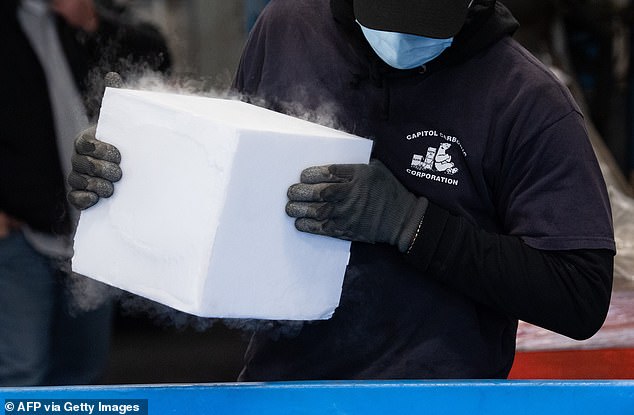 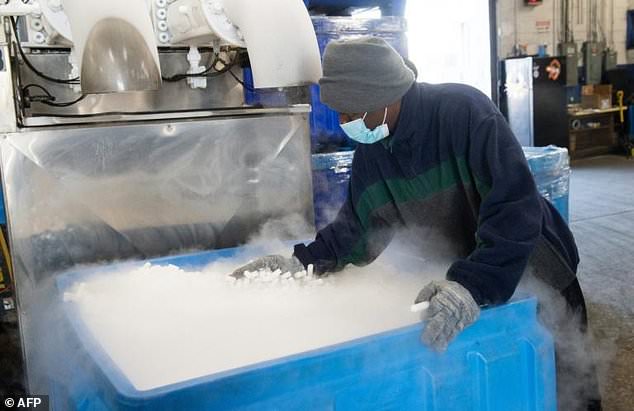 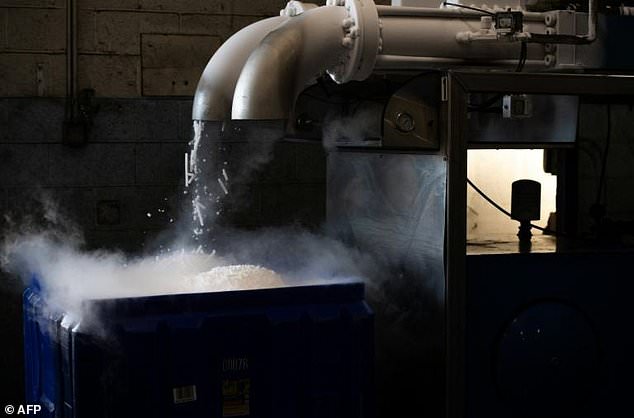 ‘We are ready, we have our tanks full,’ Gallizzo, chief financial officer for the six-decade-old family firm Capitol Carbonic, told AFP.

US regulators will decide next week whether to allow Pfizer to become the first major drugmaker to deploy its vaccine, and manufacturers like Capitol Carbonic are already finding themselves involved in one of the most important medical supply chains in history. 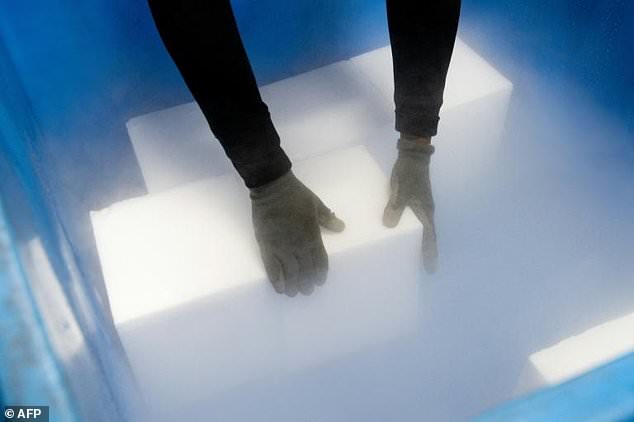 Made of liquid carbon dioxide, dry ice sublimates from a solid to a gas as soon as it’s made

The vaccines from Pfizer and others nearing approval appear to be the United States’ best chance for ending the world’s Covid-19 outbreak, which is again surging to alarming levels nationwide.

But getting shots to people nationwide will be a logistical undertaking that will test the capabilities of the world’s largest shipping firms, the small businesses that undergird the US dry ice supply and the many other companies in between.

‘We’ve never experienced anything like this before in the history of vaccine administration in the US, let alone globally,’ said Omar Chane of PricewaterhouseCoopers’ life sciences management consultancy.

Anticipation for a vaccine’s approval is particularly high in the US, where Covid-19 has killed some 270,000 people and infected more than 13.6 million. 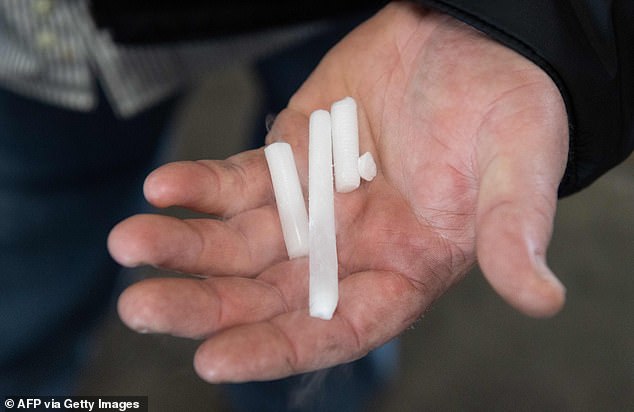 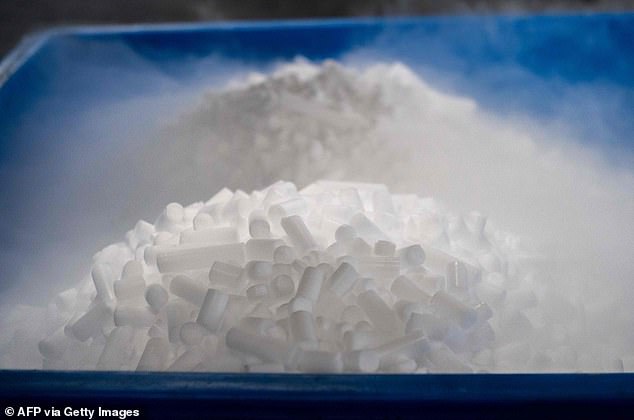 Several vaccines are under development, but the candidate from Pfizer and German firm BioNTech is nearest to approval and at the center of the US government’s immunization plan.

Assuming it’s approved, 6.4million doses could be distributed starting soon after December 10, with 40million available by the end of the month.

However that vaccine also has the strictest temperature requirement of -70 degrees Celsius, about 20 degrees warmer than the lowest temperature on earth recorded, in Antarctica.

Dry ice is the best way to maintain that temperature range, but it’s a complicated substance made of solidified carbon dioxide that begins turning to gas as soon as it’s manufactured. 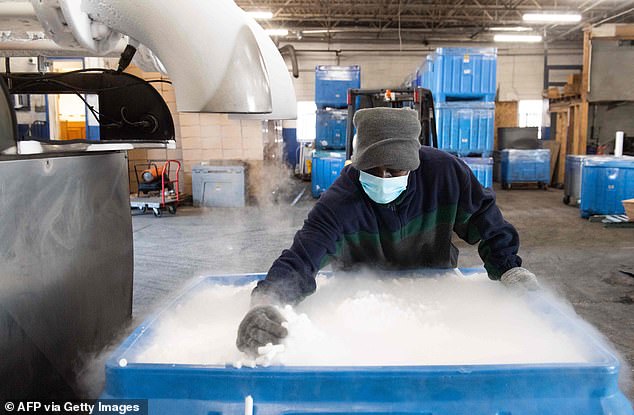 In their basketball court-sized warehouse filled with the howl of super-cold machinery at work, Capitol Carbonic makes tens of thousands of pounds in a typical day.

They range from as large as a block to as small as a grain of rice — including the pellet Pfizer expressed interest in.

The drugmaker plans to move its vaccine in a special container packed with dry ice that can be opened briefly only twice a day and lasts for 15 days.

Shippers are readying for it: FedEx says it’s received special permission to transport the substance by air, while UPS said it’s going to install dry ice makers in some of its warehouses. 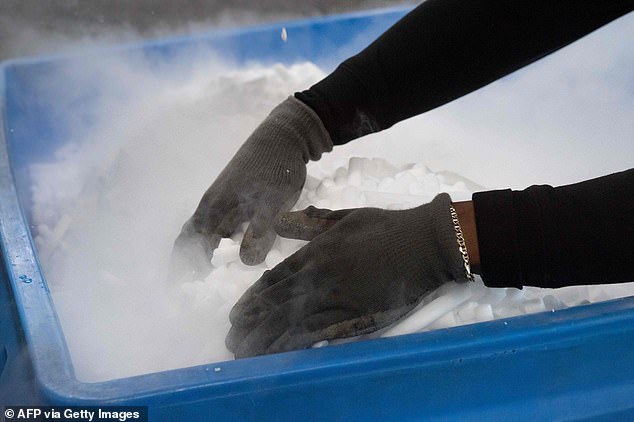 Anticipation for a vaccine’s approval is particularly high in the US, where Covid-19 has killed some 270,000 people and infected more than 13.6 million

But at -79 degrees Celsius, dry ice is not easily made, and the unanswered question for John Dillinger, Capitol’s general manager, is how the containers will be kept cool.

‘The nature of dry ice is, as soon as you make it, it starts to go away,’ he said. ‘What happens if a CVS or a Walgreens gets it, and 11 days have gone and their suitcase has run out of ice?’

In the months before they heard from Pfizer, Capitol Carbonic was having a challenging year in which demand spiked thanks in part to homebound consumers ordering more food for delivery, shipments that need to be chilled by dry ice.

But the carbon dioxide they rely on comes as a byproduct of gasoline refining, and with fewer people driving, supply was squeezed. 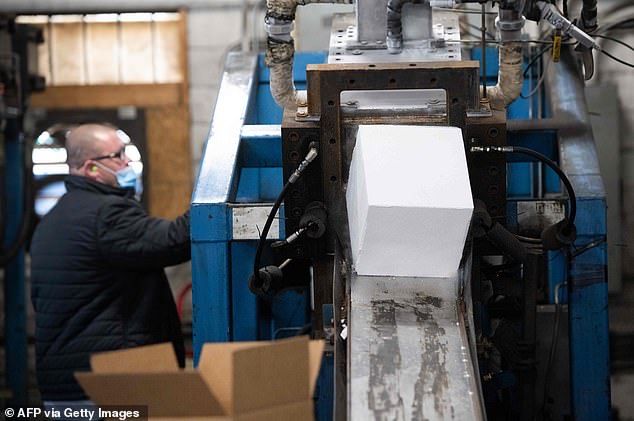 In their basketball court-sized warehouse filled with the howl of super-cold machinery at work, Capitol Carbonic makes tens of thousands of pounds of ice in a typical day

Other vaccines under development can be stored at higher temperature ranges — for some, around that of a normal refrigerator.

Candidates include one from British drugs group AstraZeneca and the University of Oxford, and another from Moderna and the US National Institutes of Health.

But experts say even those may require dry ice to keep them cold in transit.

‘Every time that it moves through the hands of a materials handler, the external ambient temperature gets warmer, which impacts the temperature of the box,’ said Glenn Richey, a supply chain management professor at Auburn University.

Barring renewed business shutdowns, Gallizzo is confident the dry ice industry can keep up with demand, but he’s less sure about the rest of the supply chain.