A young family’s holiday video reveals how their break in the sun turned into a nightmares due to ear-splitting, dawn-to-dusk nearby building work.

The sound of roaring power tools is about the only thing that can be heard in Faye Gent’s footage from her £1,300 break in Gran Canaria.

Faye and Marcus Gent, both 33, had been hoping to get some well-deserved peace with their six-month-old son Thomas. 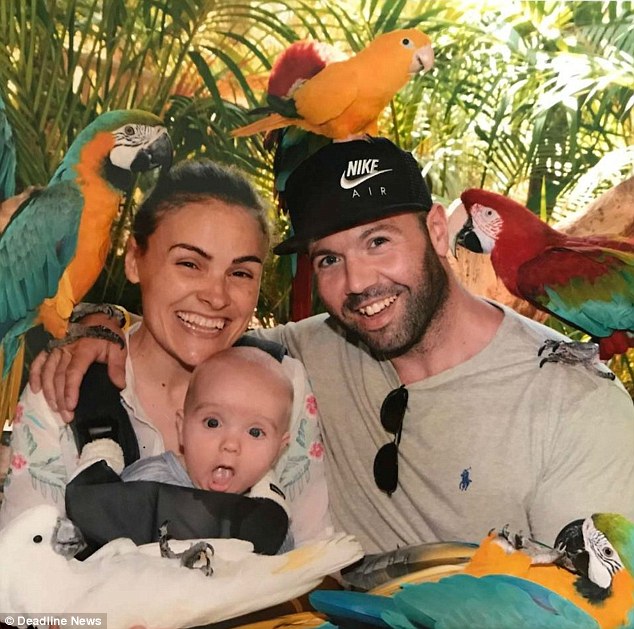 Faye, Marcus and baby Thomas were hoping for a relaxing sun-filled family holiday but their break in the sun was ruined by ear-splitting, dawn-to-dusk building work 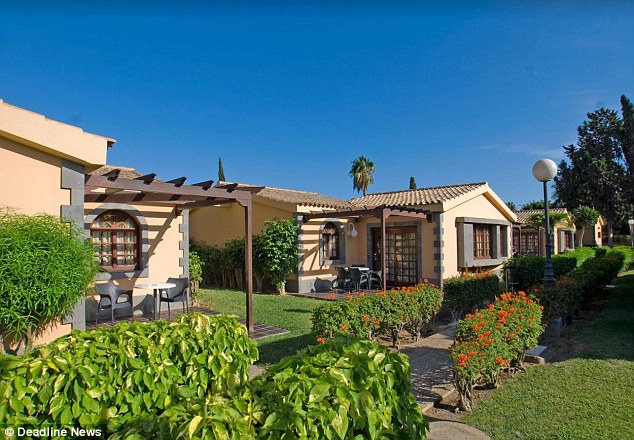 The family, from Tilbury, Essex, travelled with Tui for a week earlier this month to the resort of Maspalomas, described as ‘your house in paradise’ (pictured) The family were not warned there would be a construction work taking place. In the footage drilling can be heard in the background 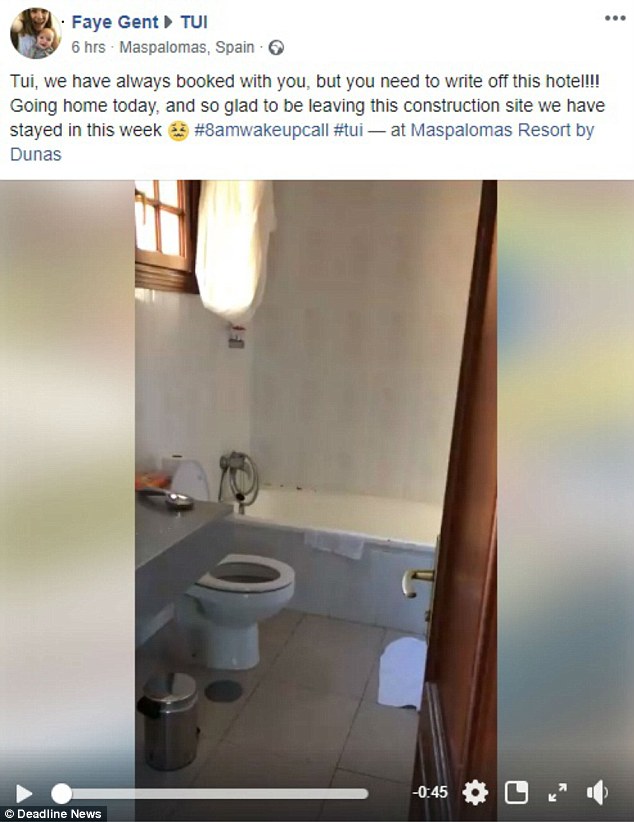 Instead, they ended up having to shut all the windows to keep out the racket while Thomas slept – despite the heat.

The family, from Tilbury, Essex, travelled with Tui for a week earlier this month to the resort of Maspalomas, described as ‘your house in paradise’.

They insist there was no warning from Tui, or anyone, that any construction work would be taking place. 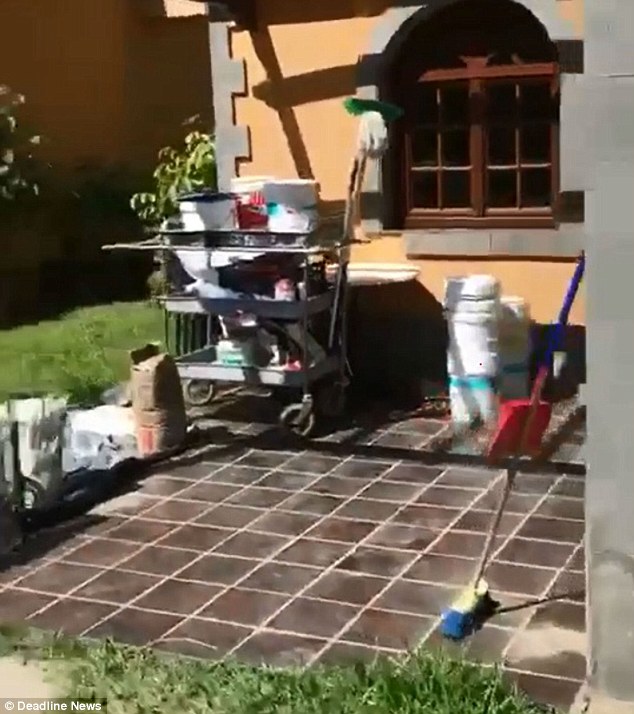 In the footage wheelbarrows, brooms, and other materials used for construction work are dotted around an area of the resort in Gran Canaria 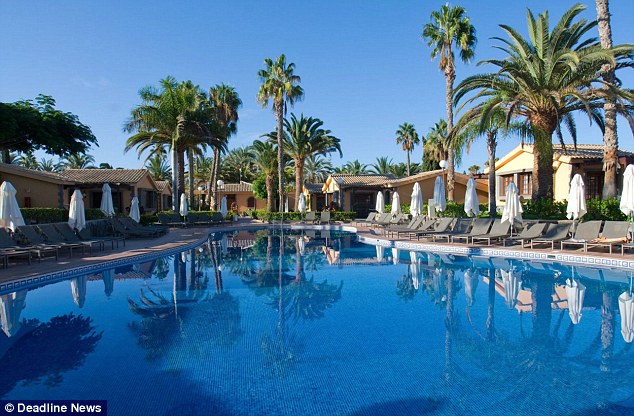 Despite the idyllic looking pool and bungalows the family, from Tilbury, in Essex, did not have a good time

The video shows Faye filming the bathroom as the drilling can be heard through the wall from the neighbouring bungalow.

The video pans to see the baby Thomas lying in his cot with his ears perked back listening to the head pounding noise.

The drilling then stops for a brief moment, before screeching once more behind the tiled bathroom wall.

The clip later shows Faye walking back to her bungalow along a stoned path with the deafening drilling still ever present.

Wheelbarrows topped with debris and a trolley full of construction and cleaning materials line the outside of the bungalow opposite to their one.

All the while young Thomas can be seen looking around in the background. 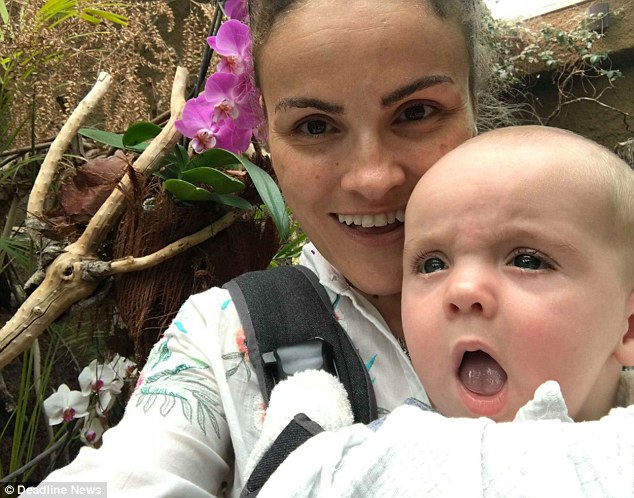 It was the first time on holiday for young Thomas. His mother and father picked the resort specifically because it had a kitchen

Faye said today: ‘It was our first family holiday and our boy is only six months old, so we only went to this resort because it had a kitchen.

‘The builders were working on several of the bungalows in the resort, refitting tiled floors and bathrooms, throughout the week.

‘That particular morning they started working on the bungalow that was attached to ours at 8am. We were only separated by a thin wall hence the loud angle grinder you can hear.

‘I think by the end of the week the works ramped up considerably and the noise could be heard around the pool so they had a lot of unhappy guests.

‘We complained to reception and they told us the works had to go on and there wasn’t anything they could do about it.’ 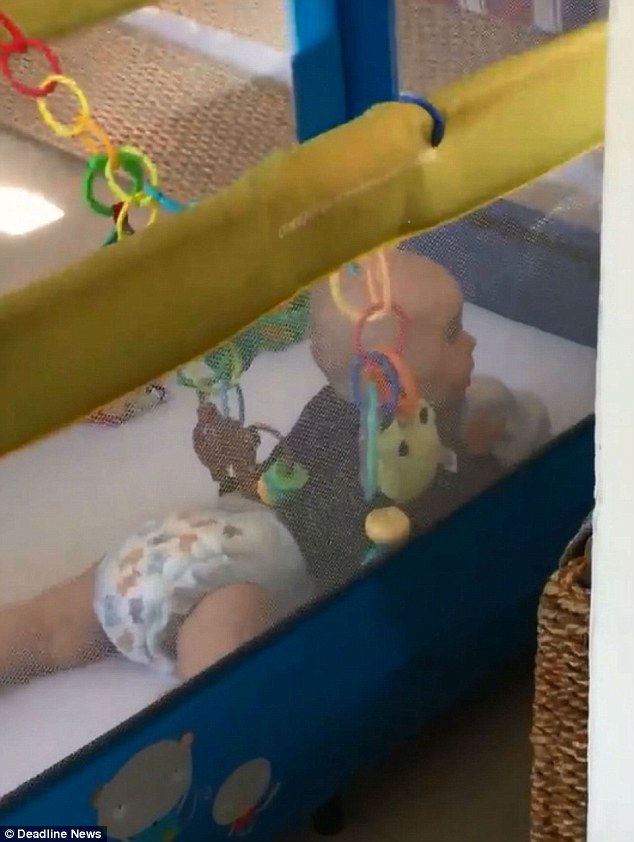 Thomas can be seen in the video kicking his legs and looking around, possibly trying to figure out the source of the noise

Faye said: ‘We had to keep the windows and doors shut on the bungalow when he slept. On the day of the video there wasn’t much chance of him being able to sleep.’

Faye posted on the TUI community page and said: ‘TUI, we have always booked with you, but you need to write off this hotel!

‘Going home today, and so glad to be leaving this construction site we have stayed in this week. 8AM wake-up call.’

The holiday resort received a similar complaints in May.

‘It totally spoilt our 10 days there. We only had 6 nights sleep and could not catch up on sleep during the day because of building work.’

A spokesman from TUI UK said; ‘We are sorry to hear about Ms Gent’s holiday experience. We have asked her to contact us so that we can investigate and be in touch directly to discuss the matter further.’

Hasidic Jews hold another funeral in Brooklyn despite coronavirus pandemic