‘#proud – thank you Mr Southgate’: Fans praise England’s World Cup heroes for getting to the semis and instilling pride back in the game despite disappointing loss to Croatia

Gareth Southgate and his players are being called national heroes by supporters who thanked them for restoring the nation’s pride in its football team during the ‘best three weeks of our lives’.

Tearful stars including Jordan Pickford, Marcus Rashford, Kieran Trippier, Harry Maguire and Kyle Walker were comforted by their partners, parents and children after their extraordinary and unexpected World Cup adventure in Russia came to an end.

On the pitch their visibly emotional manager hugged every player, most of them in tears, as the 10,000-plus English fans in the stadium cheered them and sang ‘Three Lions’ and Oasis’ ‘Don’t Look Back in Anger’.

He then went to the stands to embrace his wife Alison and teenage children Mia, 19, and Flynn, 15.

Hopes were high after Trippier’s stunning free kick sent the nation crazy in a first half where the team missed at least two more excellent opportunities to kill off the game.

But Croatia, led by star player Luca Modric, fought their way back and made England pay for their scorned chances, scoring once with 20 minutes to go and again in extra time to break English hearts.

Back home thousands of bereft fans struggled to come to terms with yet another defeat in the final stages of a major tournament. 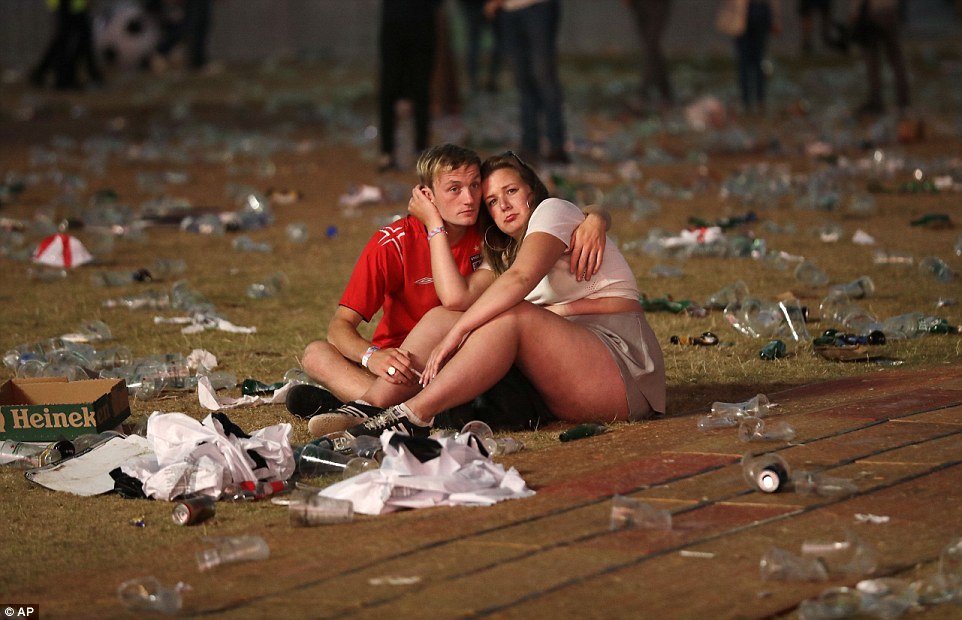 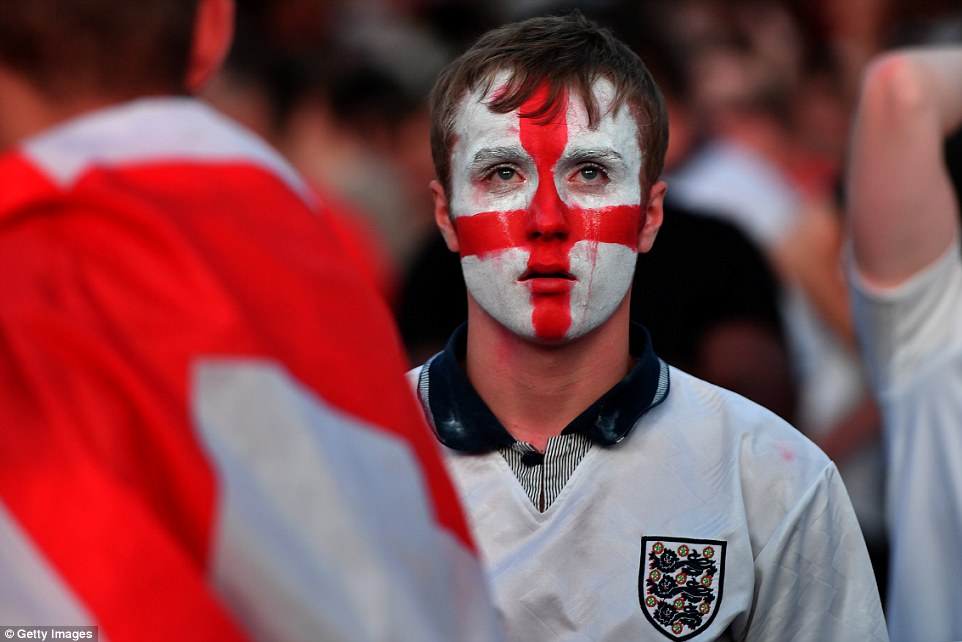 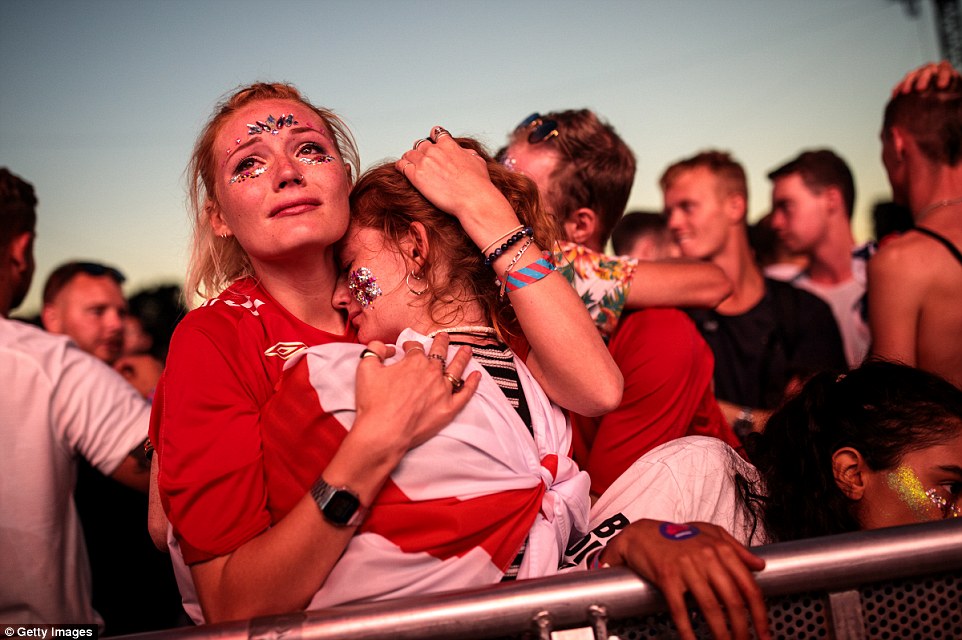 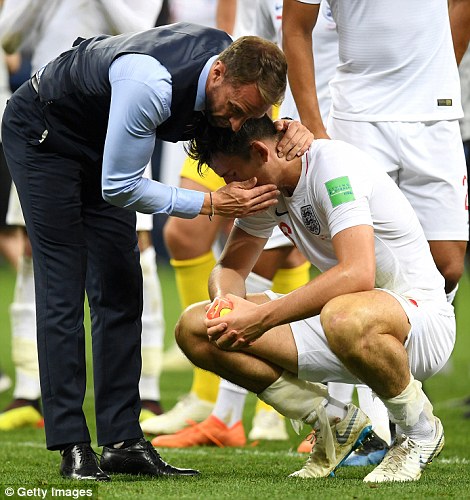 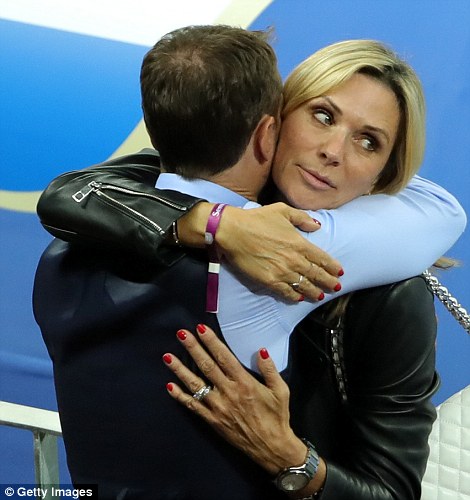 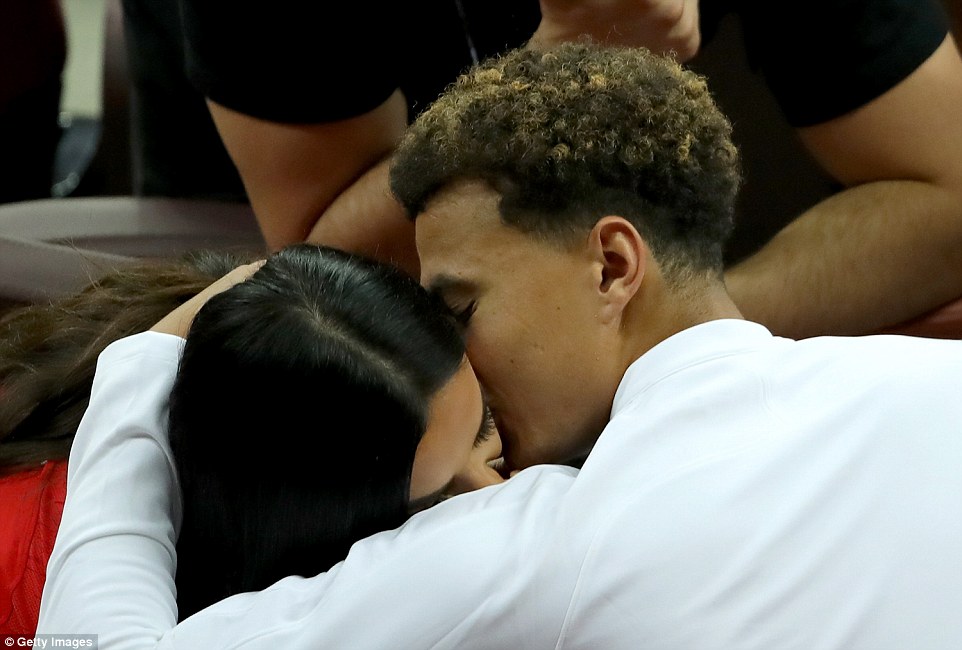 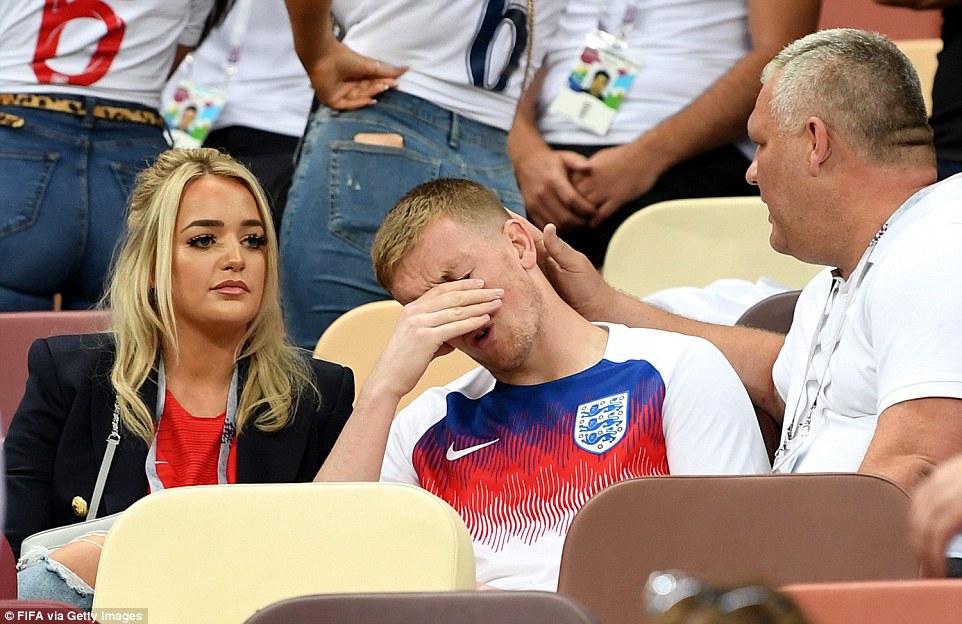 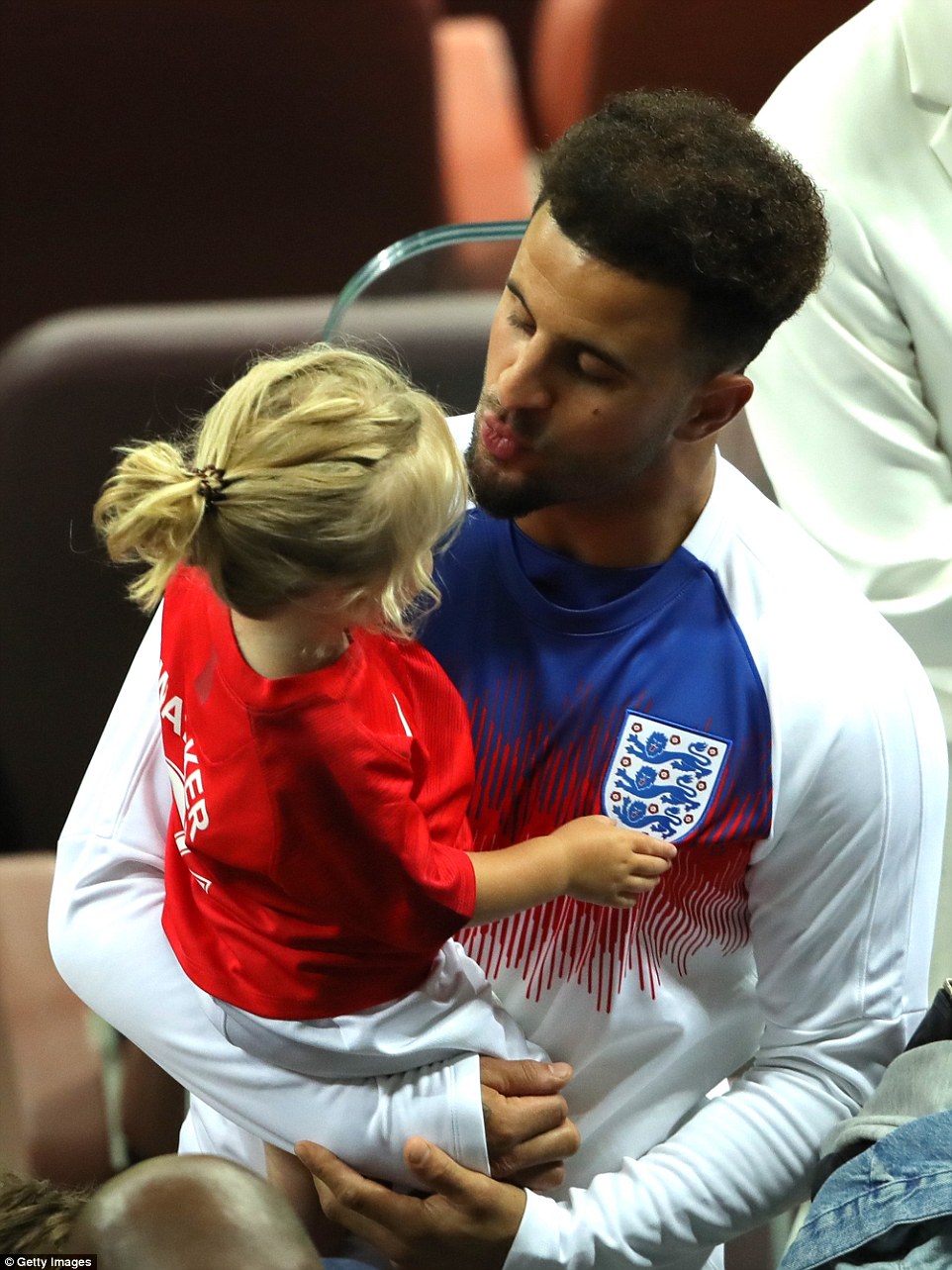 Kyle Walker kisses his daughter as England after the World Cup exit in the Luzhniki Stadium, Moscow, last night 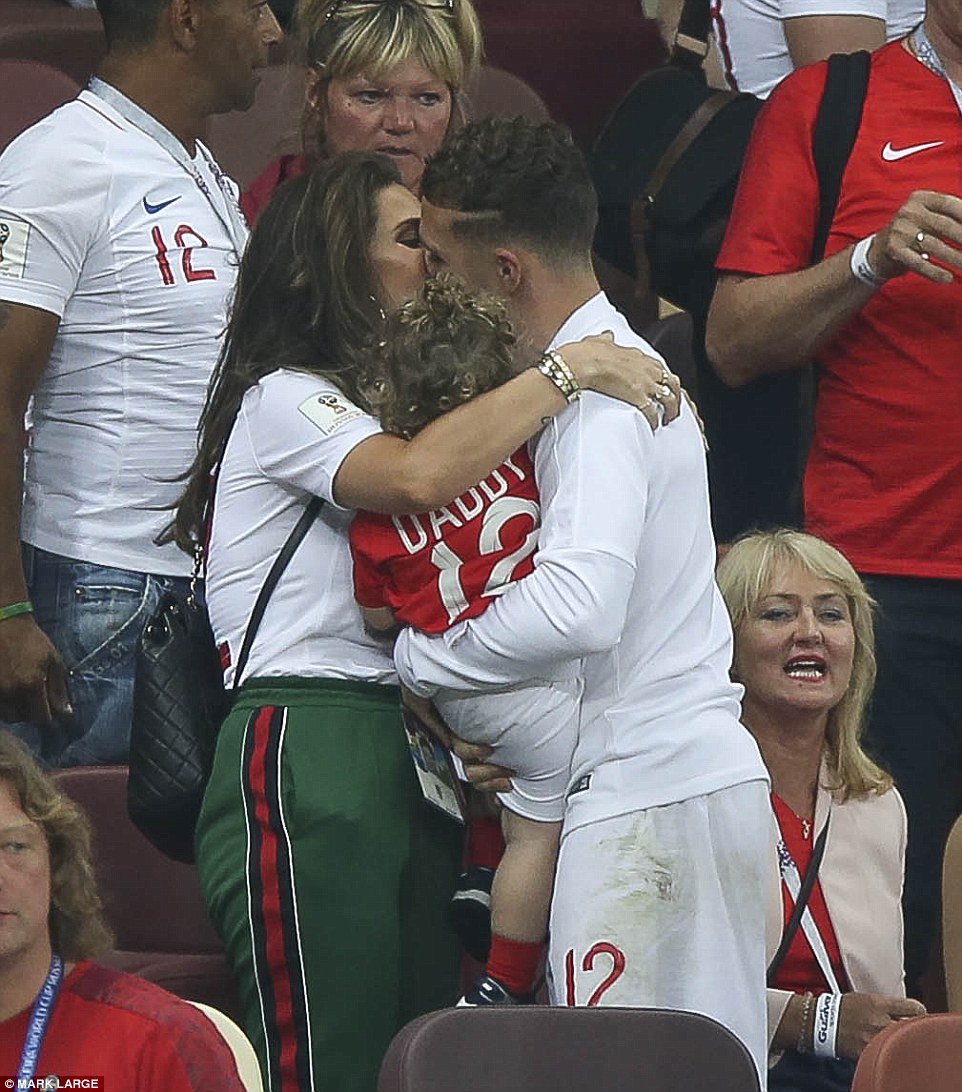 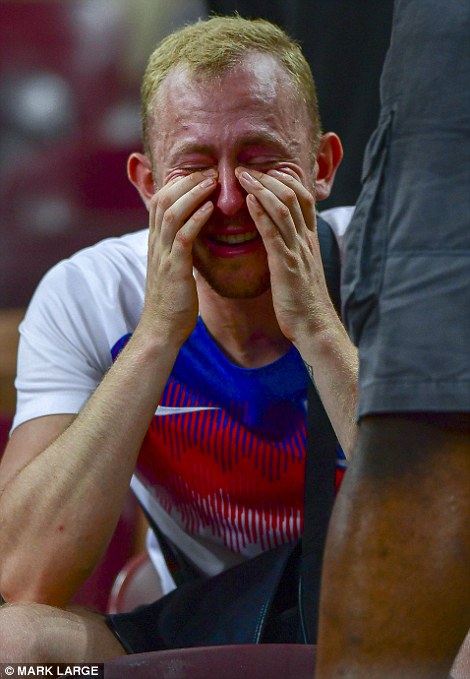 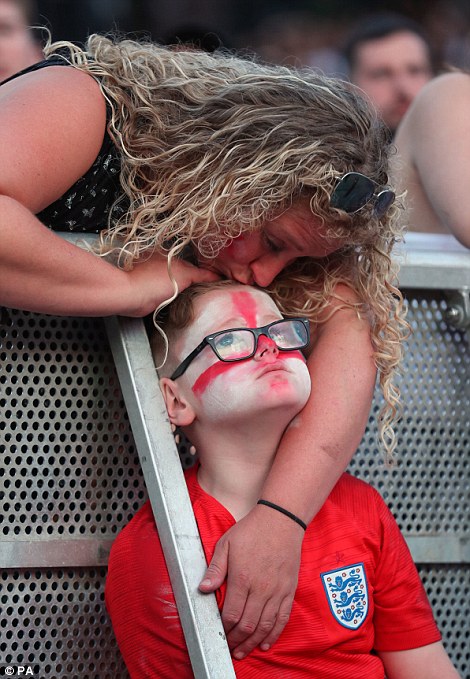 The 2-1 loss was too much for this fan in the Luzhniki Stadium as he burst into tears after the final whistle. Back home one young England fan was comforted by his mum at the Castlefield Bowl, Manchester after the loss to Croatia

Today many fans woke up with a mix of deep sadness and pride.

Chris Pit tweeted: ‘Woke up still gutted but thank you Mr Southgate for bringing belief, pride & passion back to the England team’, Sam Phillips wrote: ‘Absolutely gutted! What a journey! You gave us all hope…one day it will come home’.

Alan Kemp said: ‘Woke up today with a bit of a sore head and sore heart but a quick cuddle with my England flag just reminded me what we achieved and how proud I am of this team’.

Rob Jones wrote: ‘So it’s not coming home then…except, it still is. Football doesn’t mean a trophy or being the best. It’s about the spirit of the game, playing the game right, making your fans proud. England did that. So, it’s coming home’.

Tom Neary said: ‘Still gutted, although the trophy isn’t coming home it feels like football is. True pride in the national team, can’t wait to see them in the Euros in 2 years time’.

The England squad’s wives and girlfriends draped their arms round the players following the 2-1 defeat at the Moscow stadium.

Players fell to their knees in tears at the final whistle while millions of people watching at home were also left weeping after coming so close to getting to the final.

Megan Davison was seen sitting next to tearful goalkeeper Jordan Pickford, as his loved ones consoled him while Harry Maguire was comforted by Fern Hawkins and goal-scorer Keiran Trippier sat with his family in the stands.

Kyle Walker was comforted by his young daughter while Dele Alli embraced and kissed his girlfriend Ruby Mae.

A staggering 30,000 people descended on Hyde Park in London where the Lightning Seeds treated the crowd to a rendition of Three Lions.

Stars including One Direction’s Louis Tomlinson and London Mayor Sadiq Khan was also among the crowd.

Extraordinary footage showed the crowd go berserk after England scored with pints of flying everywhere, but by the final whistle it had all ended in tears.

Millions more watched the game in pubs and other fan festivals up and down the country.

At Millennium Square in Leeds thousands of fans, many wearing replica T-shirts, enjoyed the match.

Many linked arms to sing the national anthem, with the venue filling up completely 45 minutes before kick-off. 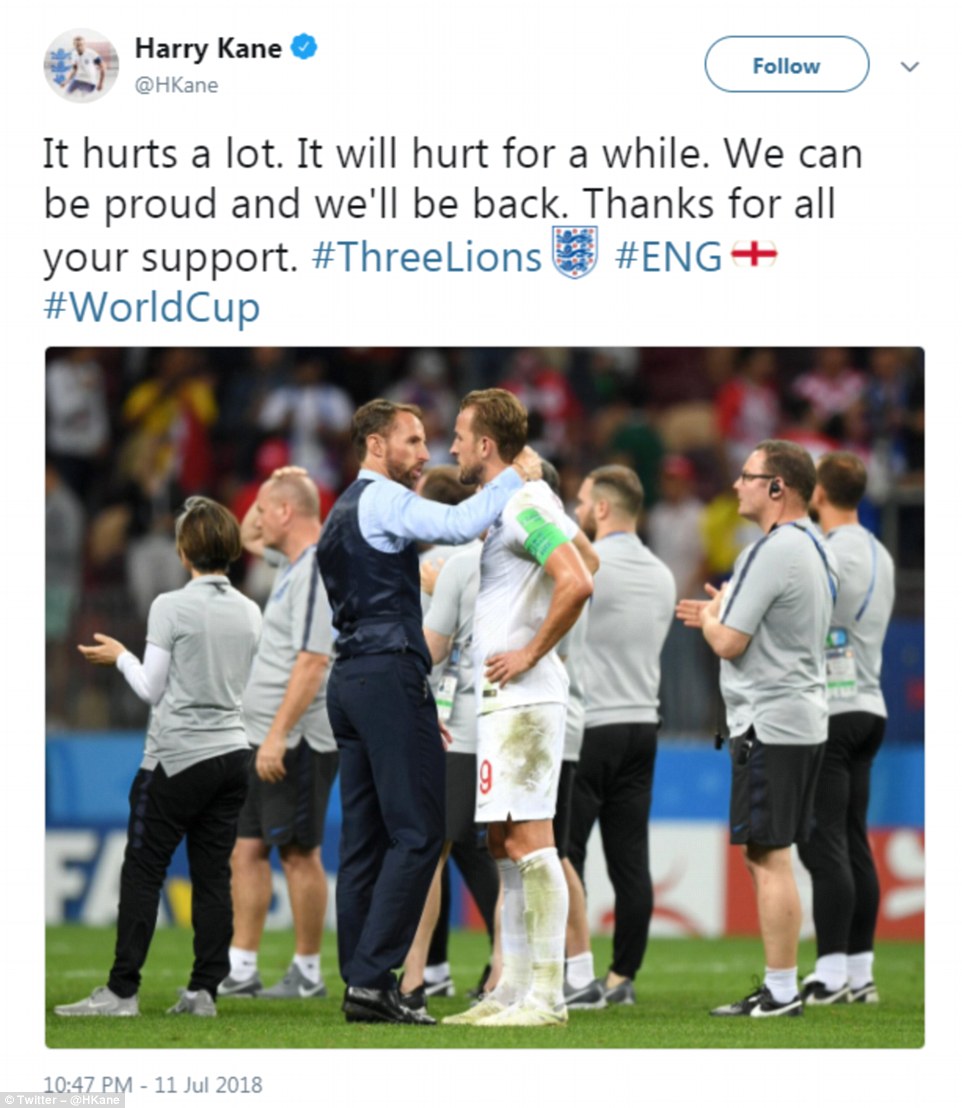 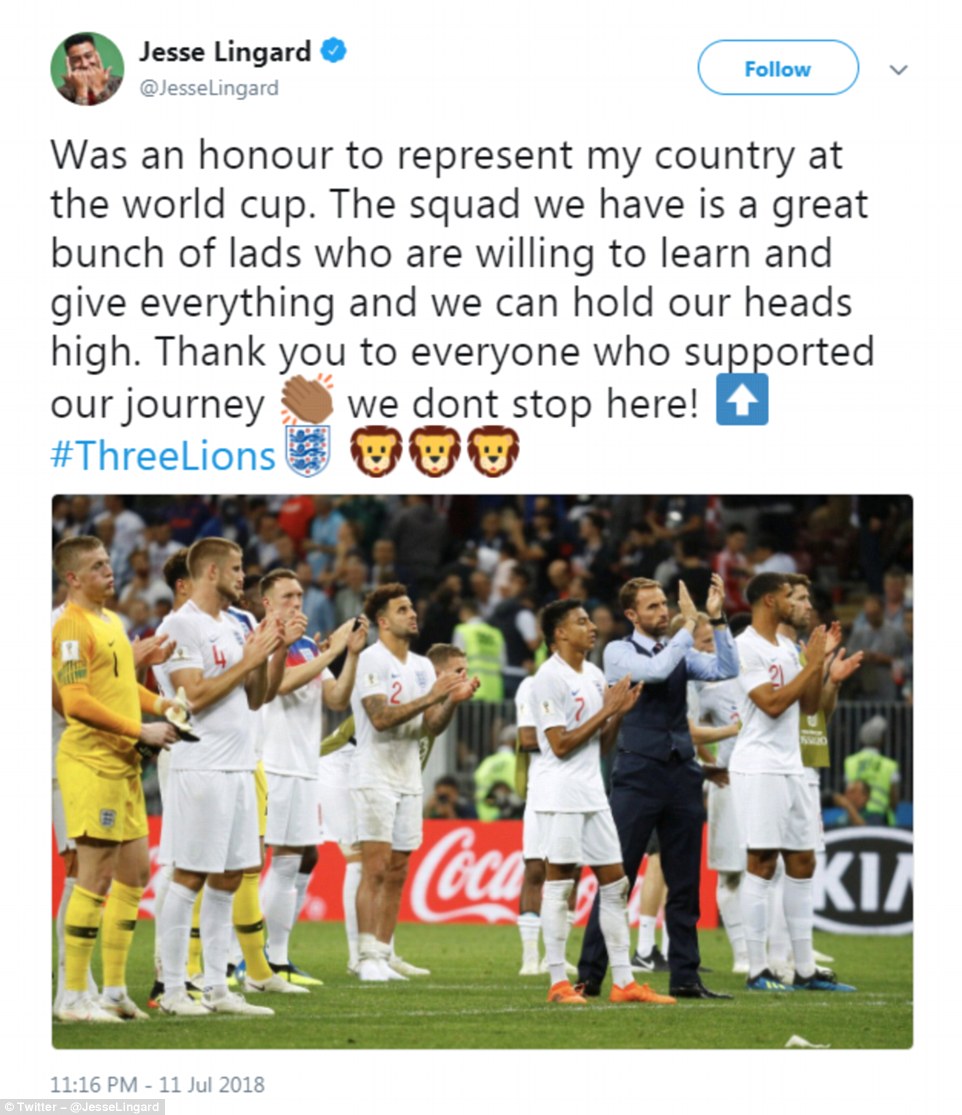 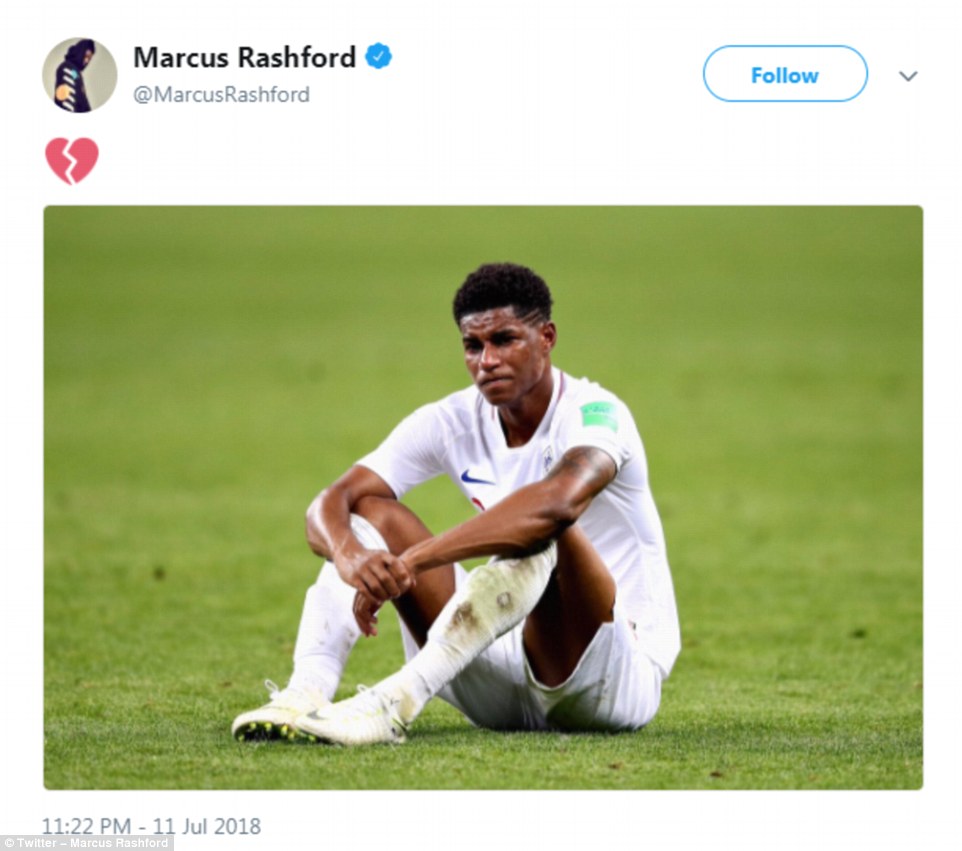 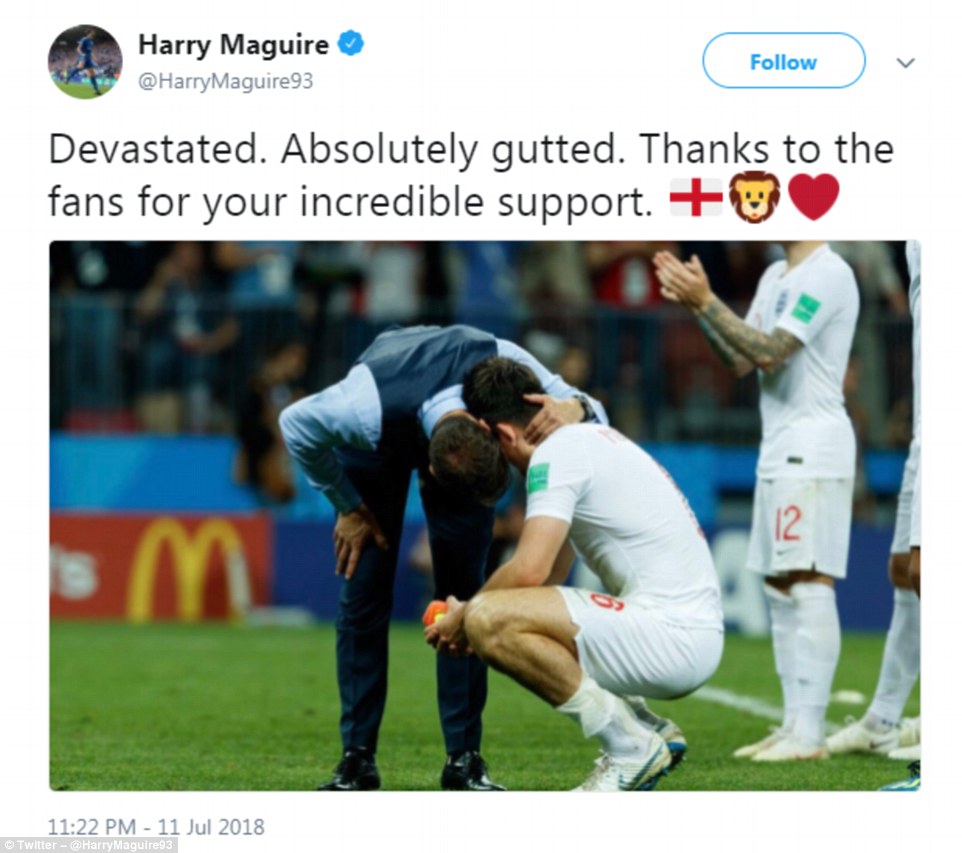 Harry Maguire, Jesse Lingard and Harry Kane also expressed their thanks to the fans 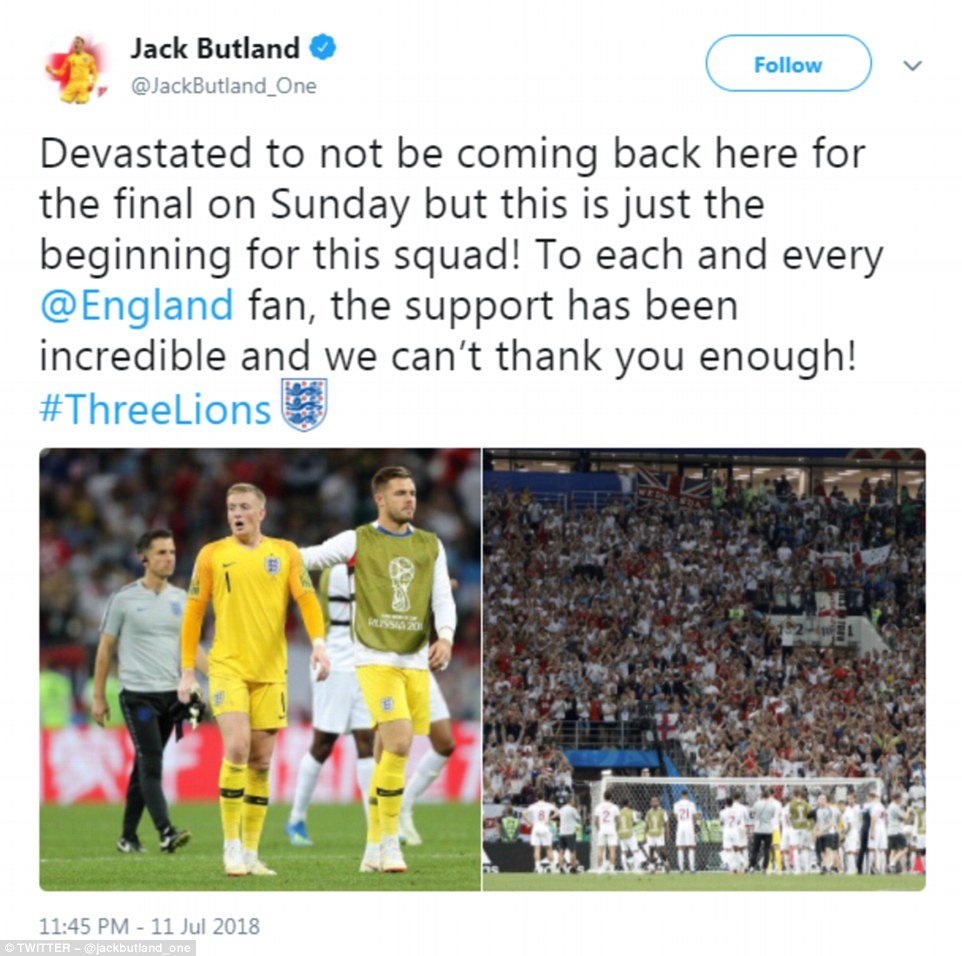 In Bristol thousands of football supporters gathered at the city’s fan zone to watch the match. And more than 8,000 fans were at Castlefield Bowl in Manchester.

After the defeat, Prince William offered his support to the England team. He tweeted: ‘I know how disappointed you must feel right now but I couldn’t be more proud of this team and you should hold your heads high.

‘You’ve had an incredible World Cup, made history, and gave us fans something to believe in. We know there is more to come from this team. W.’

Theresa May said: ‘Wasn’t to be this time but it’s been a great journey that’s made the country proud. We’ll be flying the flag on Saturday. Three Lions.’

Speaking to ITV after the match, captain Harry Kane said: ‘It is tough. We are gutted. We worked so hard. The fans were amazing. It was a tough game.

‘It hurts a lot and we are going to hurt for a while, but we can hold our heads up high. It has been a fantastic journey and we got further than anyone thought we could have. We thought we were good enough to go on and win it. The next step now is to go one further. We have to dust ourselves down and be proud of what we achieved. Then we go again.’

Fans who made the journey to Russia spoke of their disappointment but praised the team for exceeding expectations. Salesman Peter Wood, 63, from Bristol, said: ‘I’m proud of this team and believe they’ll be back even stronger next time.

‘We were given no chance at the start of the tournament yet somehow got to within touching distance of the final. That’s a huge achievement.’ 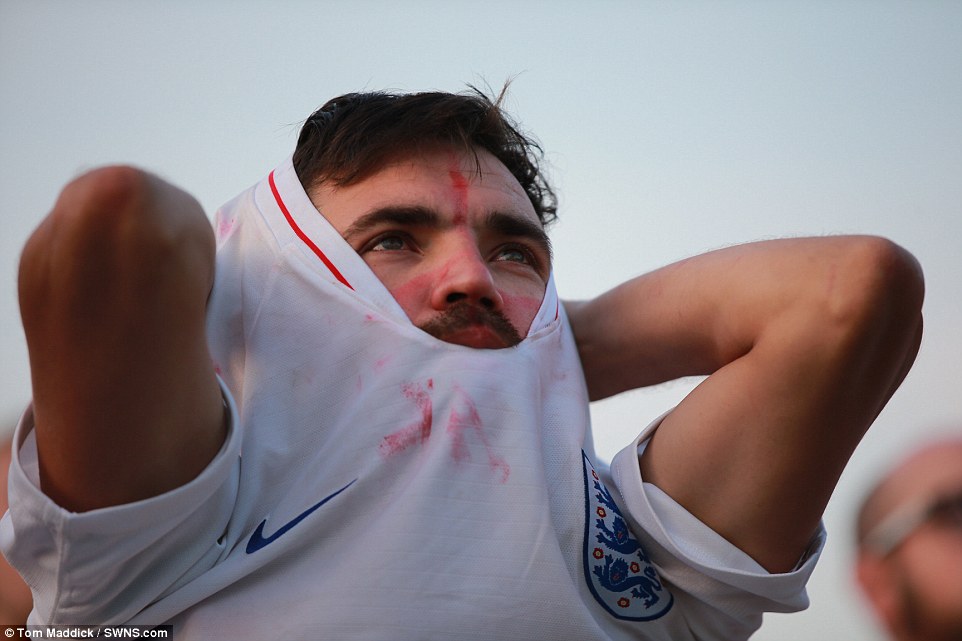 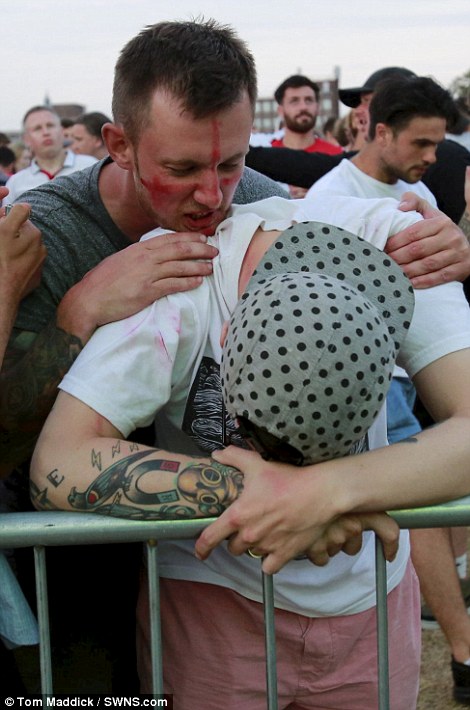 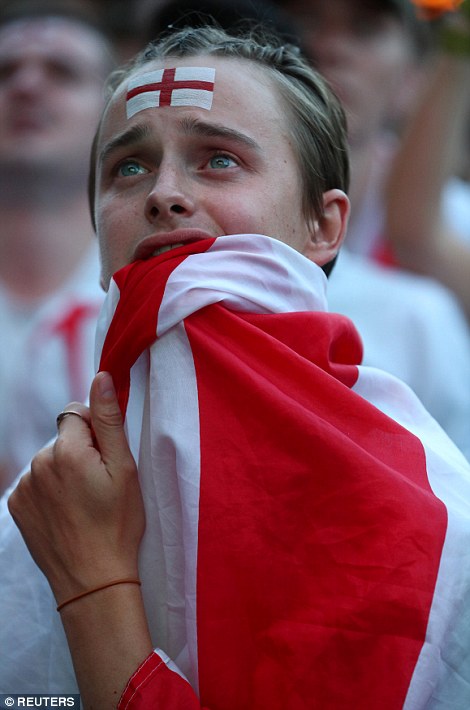 England fans struggled to hide their anguish as the game went to a draw and the extra time whistle blew. Fans were left gutted in Nottingham Castle (left) and Flat Iron Square (right) 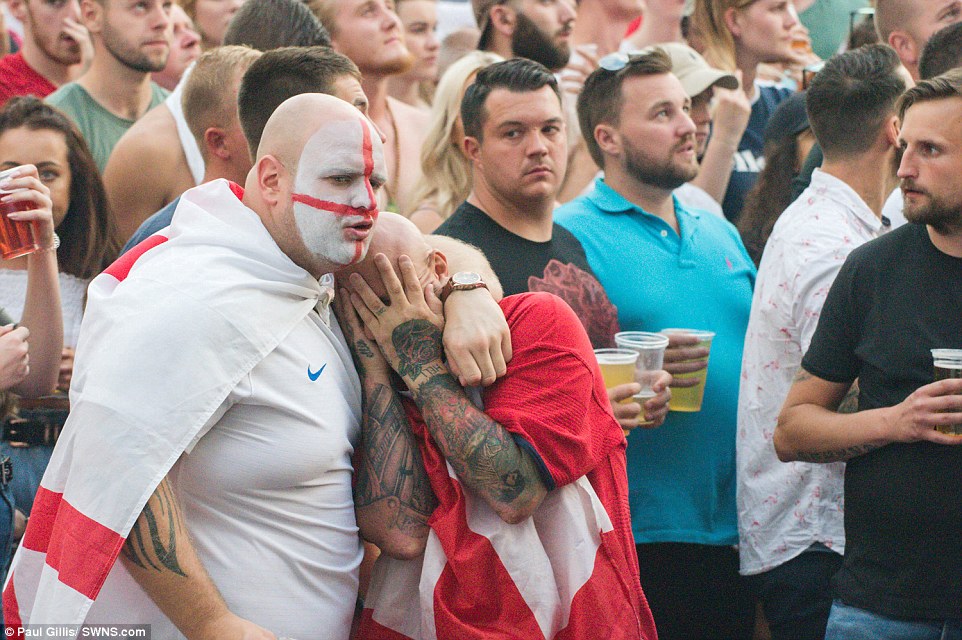 England fans burst into tears after the game tonight, with one face-painted man quick to comfort his companion watching at Ashton Gate Stadium in Bristol 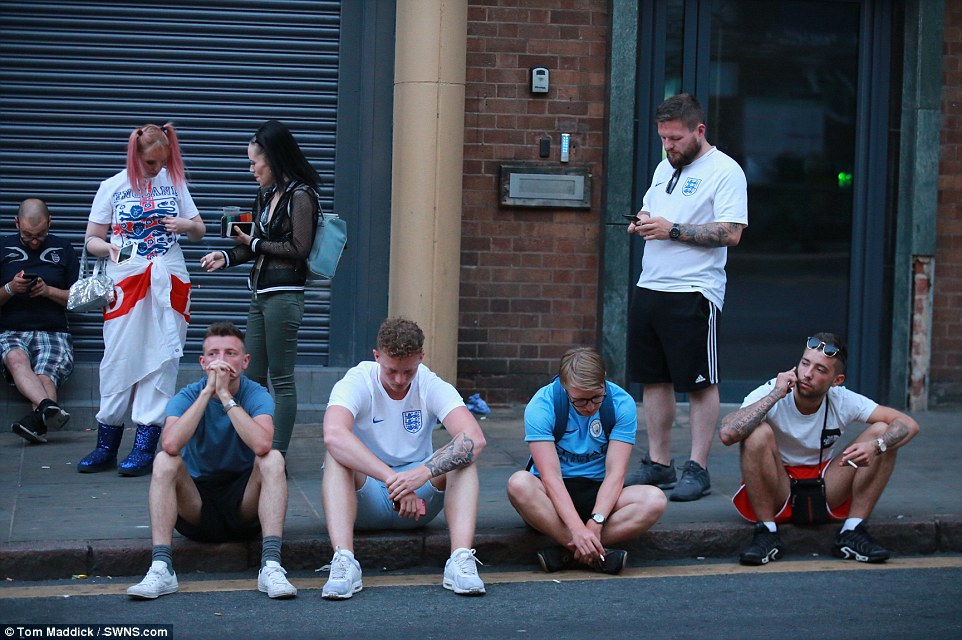 Fans’ anguish: Men sat in silence along the roadside in Nottingham just hours after jubilant scenes in the English city 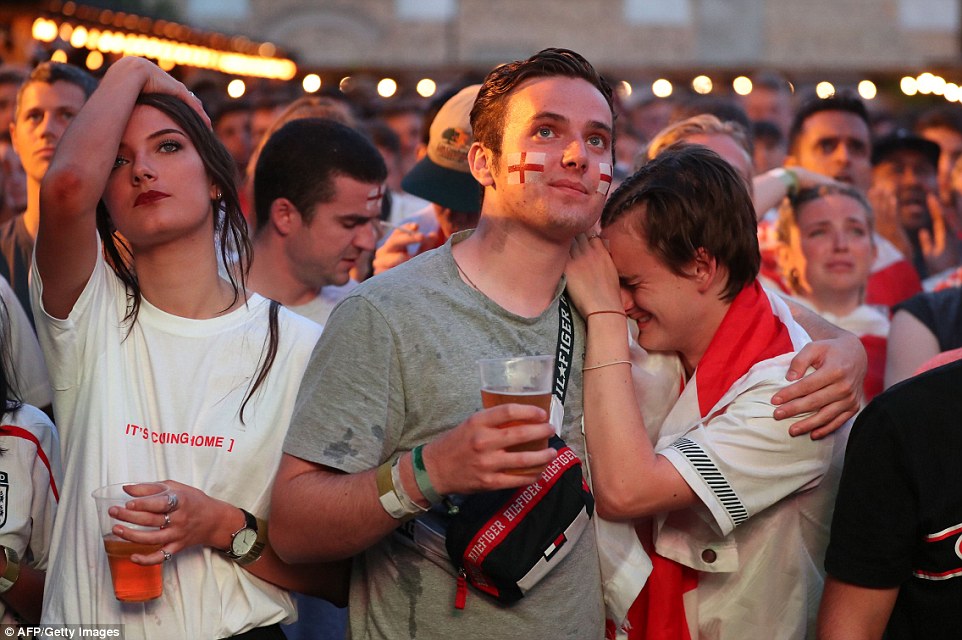 Disappointment for England as Gareth Southgate’s team failed to secure the win the fans had desperately hoped for at home. Pictured: Flat Iron Square in London 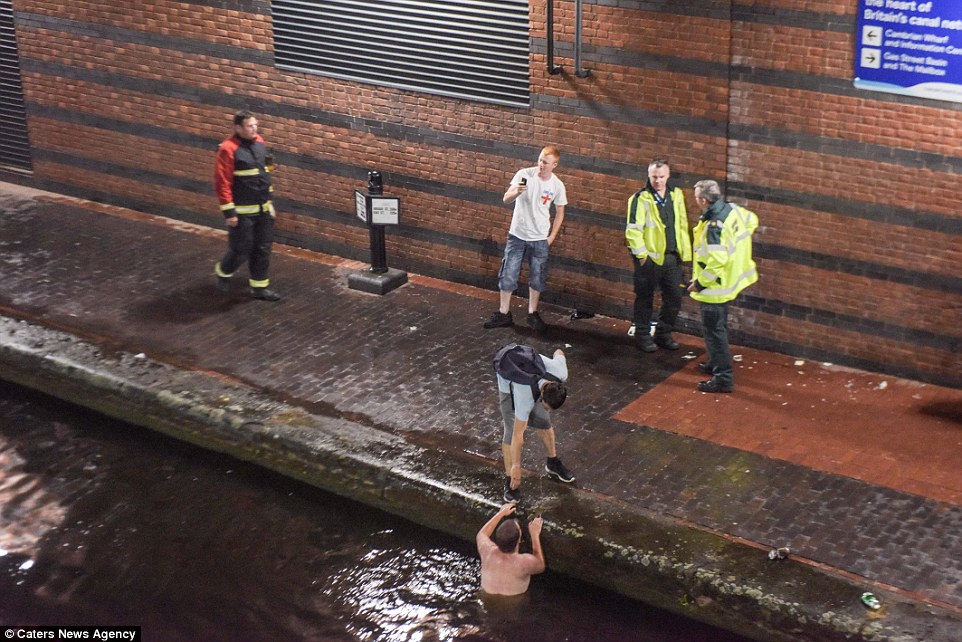 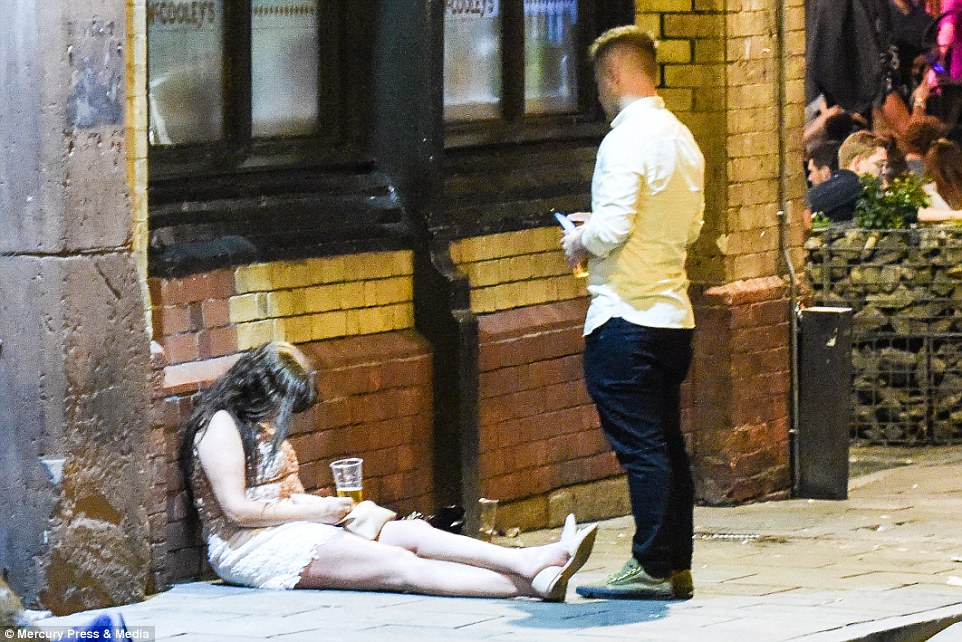 Bed shop owner Colin Whiting, 48, also from Bristol, said: ‘It’s been a privilege to see this team come so far and make us all so proud. But they’ve fallen after bringing us so close to a World Cup final after more than 50 years.’

Insurance broker Tom Reynolds, 30, from London, was stoic: ‘No one gave us a chance in hell at the start of this – and it was all about managing expectations.

‘But it’s been an absolute privilege to support these lads.’

Former England striker Gary Lineker said: ‘Utterly choked, but this young side gave absolutely everything. It’s a huge step forward and they’ll only get better.

‘They can hold their heads high, they did our country proud. Congratulations to Croatia.’