Farmer races over blazing Saddleworth Moor to save his 3,000 sheep

Farmer races on quad bike over blazing Saddleworth Moor to save his 3,000 stranded sheep – as Army joins fight against flames on fifth day of crisis 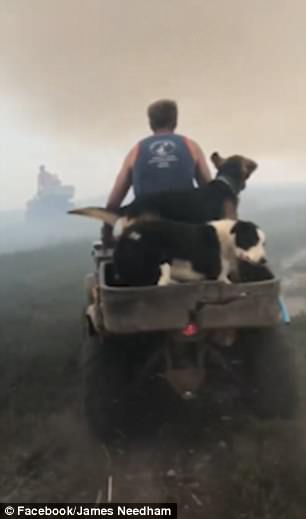 James Crowther, 30, launched into action to save sheep on Saddleworth Moor

A farmer launched a heroic bid to save his sheep from a fire as it raged across grassland towards them.

Dramatic footage of James Crowther, 30, risking his own life for his livestock has emerged as he raced to save them on the back of a quad bike in Greater Manchester.

Mr Crowther’s family, friends and sheepdogs pitched in to move the family’s 3,000 ewes and rams to a safer field as fire hit the county on Saddleworth Moor.

A dramatic picture showed one sheep from the farm wandering across the charred moorland with its fleece badly singed by the flames on this morning.

Flames over 6ft high blazed across the sheep’s field as Mr Crowther conducted a two-hour rescue operation to try to save the huge flock.

The moor fire has been raging for five days, as another started just an hour’s drive away, on Thursday.

Pictures emerged of a quad-bike led rescue operation saw him chase through the flames to reach the sheep – which the farmer described as ‘very difficult to see’ through the thick smoke.

Farm friend James Needham, 30, who helped with the rescue operation, said: ‘You couldn’t really see the sheep in the smoke we were just using our hunt away dogs and the noise of quads to push them away from fire.

‘There wasn’t really a choice in the matter, it was either that or they would have all burnt. We only know of the one sheep which has been singed at this point.

‘We have gathered from the moors hundreds of times but never in these circumstances.’ 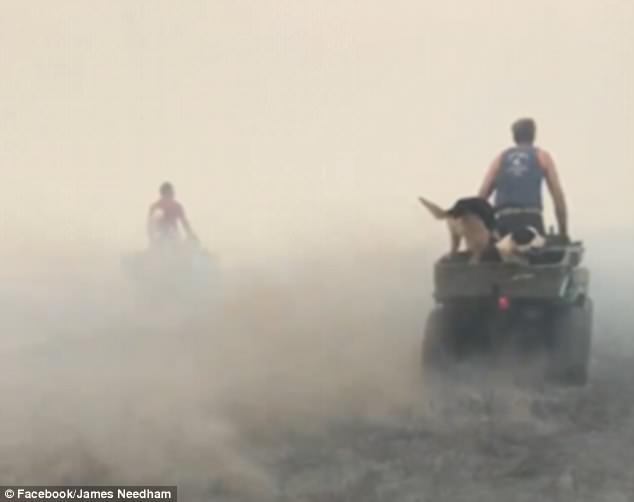 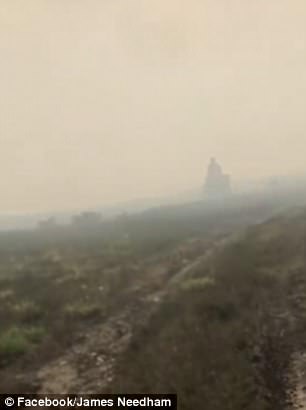 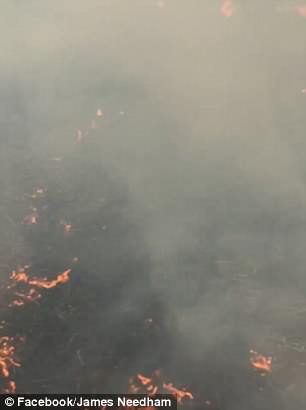 Farmer James Crowther headed over the moor at full speed as the fire tore up Saddleworth Moor, Greater Manchester 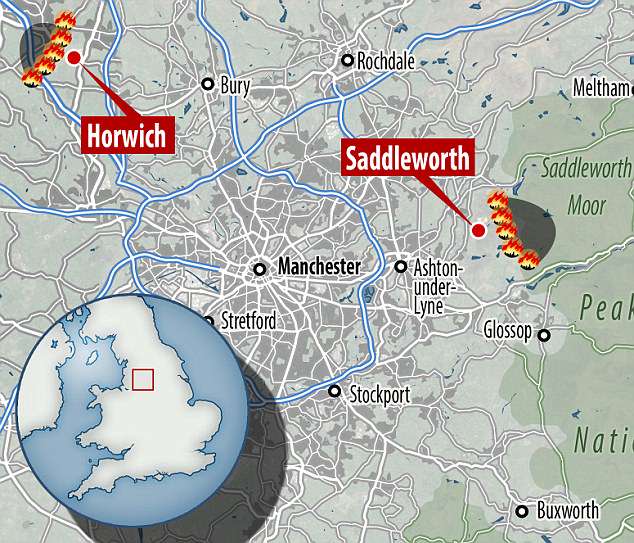 Where is Saddleworth Moor?

The moor takes its name from the parish of Saddleworth to the west, historically in the West Riding of Yorkshire although it is on the western side of the Pennines, but a part of Greater Manchester since 1974.

The moor straddles the metropolitan boroughs of Oldham in Greater Manchester and Kirklees in West Yorkshire. Moorland east of the county boundary with West Yorkshire is known as Wessenden Moor and WessendenHead Moor.

The moor is crossed by the A635 between the Greater Manchester and West Yorkshire Urban Areas.

Despite his incredible efforts, Mr Crowther fears many animals which could not be moved may have perished.

He said: ‘The smoke was so thick and the flames between six and seven foot high across the field. We just waited for gaps in the flames to rush through to be able to move the sheep.’

Mr Crowther, who helps run Upperwood Farm in Oldham, said they battled the blaze without protective clothing in order to reach the sheep as quickly as possible.

He added: ‘We had to cut the fence off the edge of the field to move them off the hillside. The smoke was so thick, you couldn’t see anything.’

However, he will be unable to find out how many of the other animals have survived until the flames subside.

‘Everything up there might be dead, we haven’t found any animals alive yet which were on that field. We won’t know until we can reach them when it is safe.’

Claire Crowther, from Upperwood Farm, Saddleworth, moved 450 sheep from the moors and out of danger on Tuesday.

Claire, 26, said: ‘It’s been a tough couple of days. We have had a lot of help from other farmers, which we appreciate.

‘Some of the sheep were running back towards the flames, which was horrible.

‘The smoke was really bad and the heat intense. My eyes were streaming and it was really hard to breathe.

‘I’ve never seen a fire like it. It has been absolutely devastating.

‘Someone said they saw two deer run back in trying to get to their young and then they were seen coming back out in flames.

‘I just hope the worst is over.’

More than thirty homes have been evacuated as a result of the fires. 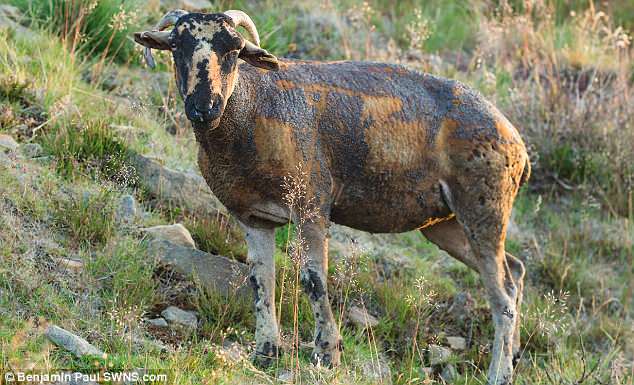 Horrific: A tragic photograph of a scorched ram – alive but stranded – on the devastated moorland in Greater Manchester 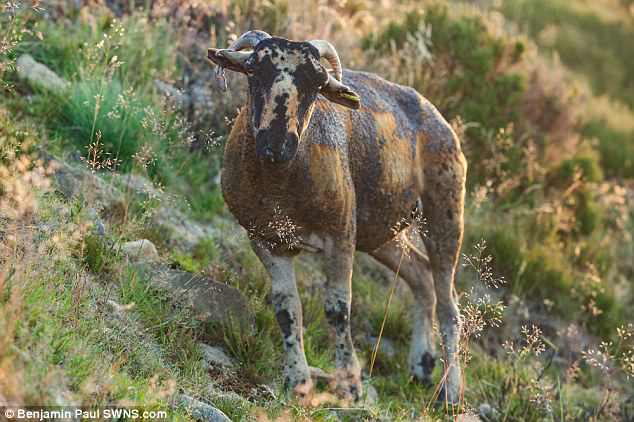 A sheep that has been badly burned by the huge moorland fires in the hills above Stalybridge, Greater Manchester 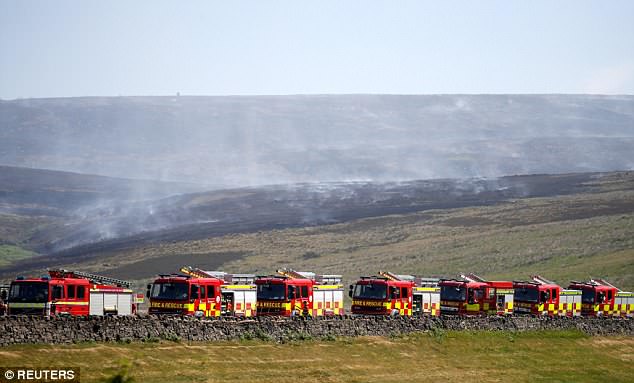 Day five: Seven fire trucks parked up in a position of safety on the gigantic moors as around 100 firefighters continue to tackle the inferno 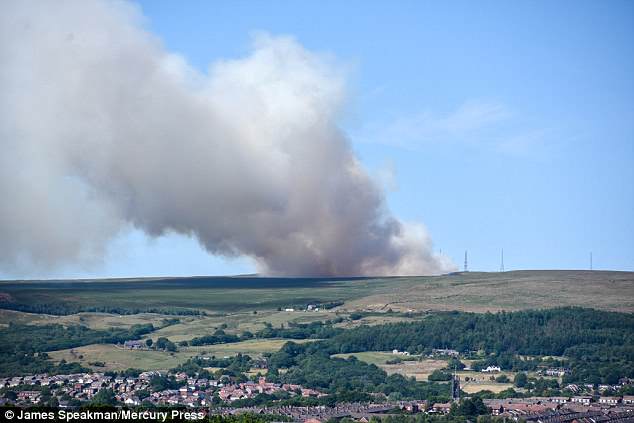 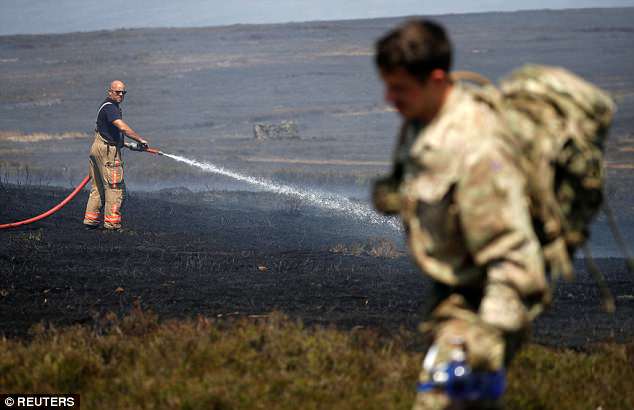 On hand: A soldier steps in to help assist a firefighter who was pictured spraying water onto the charred landscape 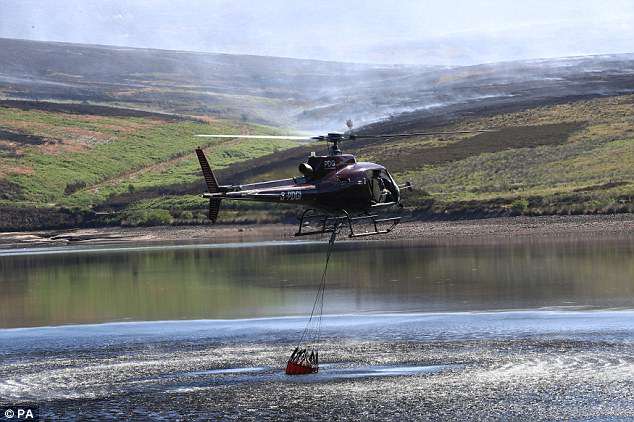 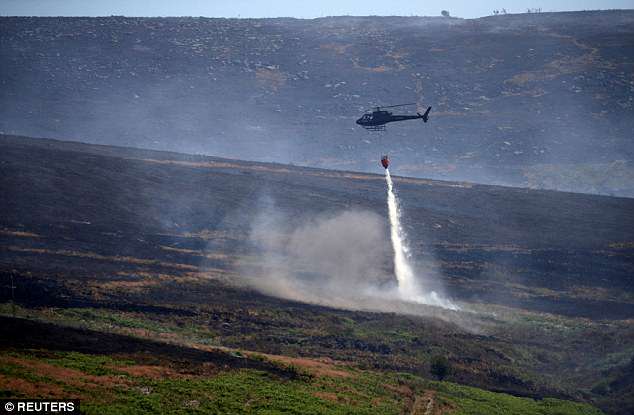 A helicopter drops water as firefighters continue to tackle a blaze on Saddleworth Moor, Britain

A Defra spokesperson said: ‘It is our understanding that sheep on Saddleworth are currently off the moor to be shorn. Our duty vets and the Animal and Plant Health Agency (APHA) are not aware of any livestock being injured by the fire.

‘If anyone sees an animal in distress, they should report it to APHA’s helpline or seek the assistance of a local vet.’

Two huge fires are being fought on grassland, just on hour’s drive apart, as the army and the RAF have been called in.

The first huge blaze on Saddleworth Moor spread quickly, sending huge plumes of smoke into the air, five days ago.

Farmers rushed to their land to attempt to save their wildstock while emergency services have spent almost a week fighting the fire.

Meanwhile huge plumes of smoke were seen rising above Winter Hill in the town on Thursday, about an hour’s drive from the Moor. 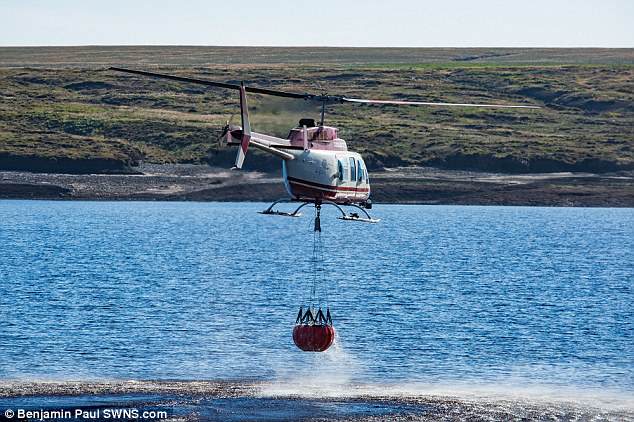 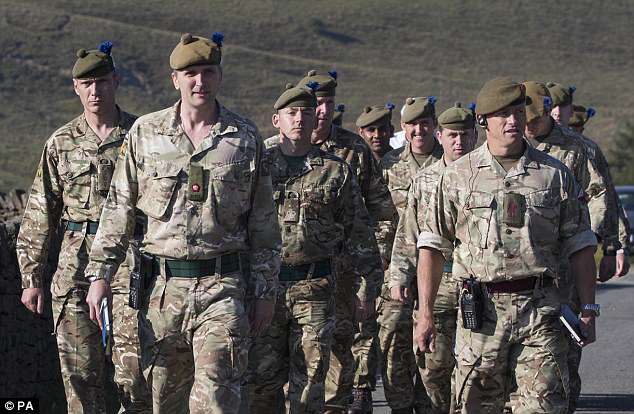 Drafted in: Army soldiers from the Royal Regiment of Scotland arrive on Saddleworth Moor to help fight the seven-mile blaze

As scores of military and emergency service personel continue their efforts on the moors, attention has turned to the wildlife and moorland animals ravaged in the fire’s wake.

A lone sheep was spotted wandering across the charred moorland with its fleece badly singed by the flames.

Hillwalker Paul Benjamin, 29, came across the badly burned sheep which was making a rattling breathing noise like that of an ’80-year-old smoker’.

He said: ‘It was stood near some smouldering ground on the top hill above Carrbrook near Stalybridge. Its body was badly burned and it had no wool left.

‘Its skin was blistered and singed. It was making a rattling breathing noise which sounded like an 80-year-old smoker and had gunk coming out of its nose.

‘Firefighters pointed the animal out to me and said, ‘that’s the real cost of fires like this’. It looked like it was in shock.

‘I was up on the moors for two hours and it was the only sheep I saw.’

The RSPCA has issued advice and help to pet owners and farmers concerned they may be affected by the Moorland fire. 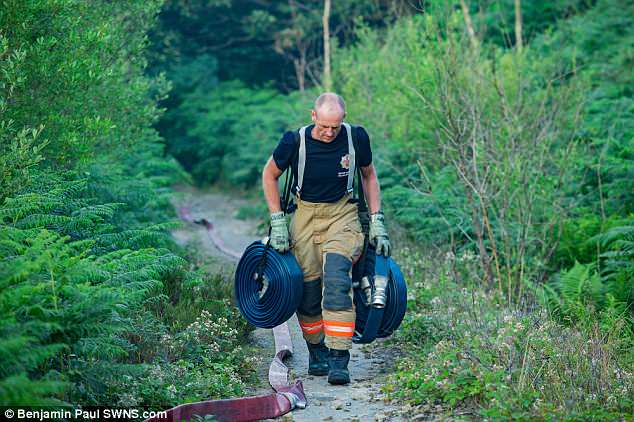 Intense: The multiple fires have raged deep within the moorland, away from nearby roads, leaving firefighters forced to walk for miles with heavy kit 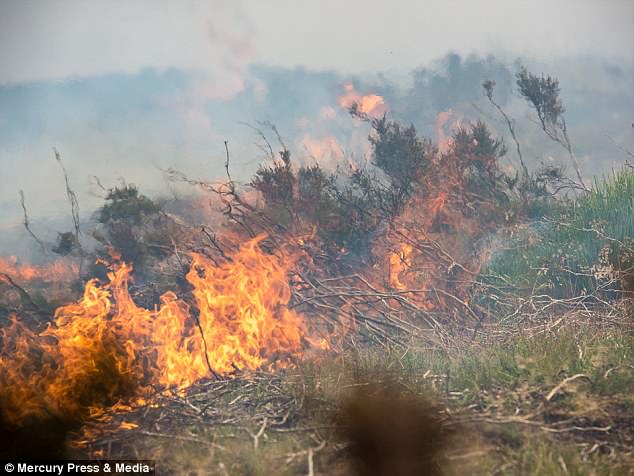 Inferno: A spokesman for Greater Manchester Fire Service told MailOnline the fire was very much still ongoing at Wednesday lunchtime 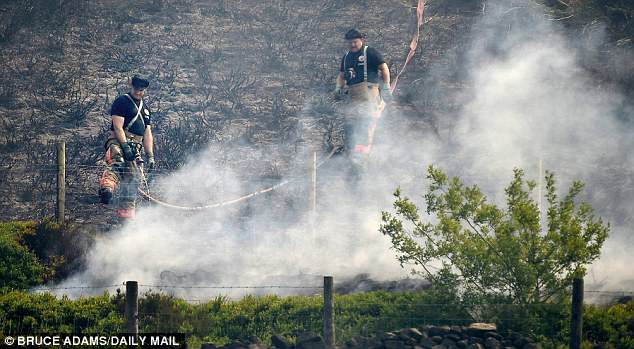 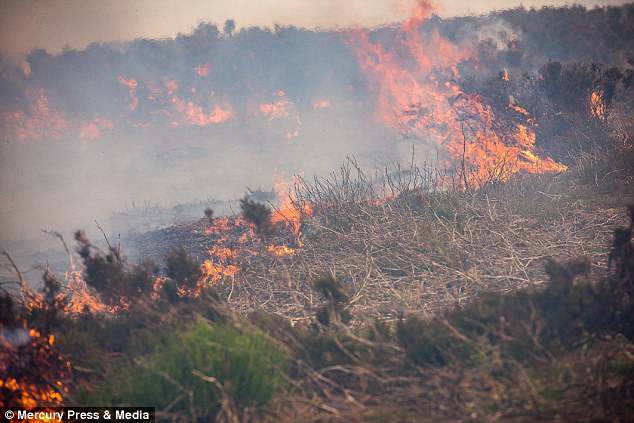 Unforgiving: As the fire rages into its fourth consecutive day, Britain faces its hottest day of the year so far with temperatures expected to reach 94F (33C) 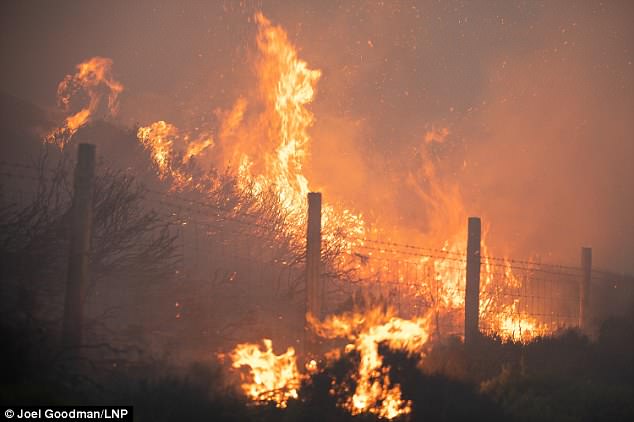 Dangerous: Last night 34 homes had to be evacuated when the fire quickly spread across the baking hot moorland