Toronto: Vancouverites were frying eggs on pans placed on their terraces.

One man checked into an air-conditioned five-star hotel, after the five fans aimed at his bed at home and the seventh cold shower failed to bring relief. 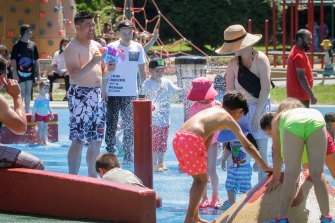 People cool off at a water park in Vancouver, British Columbia, Canada on Sunday. Credit:Getty Images

The heat wave across western Canada has much of a country known for its sweater weather sweating.

“This is a complete shock to a Canadian — this feels like Las Vegas or India — not Vancouver,” said Chris Johnson, a criminal lawyer who was heading to an air-conditioned hotel room as temperatures inside his home reached 32.

Tying any weather event to climate change requires extensive attribution analysis, but heat waves around the world are growing more frequent, longer-lasting and more dangerous, experts say. David Phillips, senior climatologist at Environment Canada, a government agency, said the early timing of this one, its intensity and its duration, could all be attributable to rising global temperatures.

“It’s our grandparents’ heat waves, but it’s different now because of the human component,” Phillips said, referring to climate change, and the well-documented effects of human behaviour like carbon emissions on the planet.

Phillips pointed to the public health dangers of having heat extend overnight. “We know that nighttime temperatures, that’s where people die from heat waves,” he said.

At a time when many Canadians have finally been enjoying the northern summer amid the easing of coronavirus restrictions and newly opened restaurant terraces, beaches and parks, scorching temperatures have added another public health burden. Now, the authorities must contend with both the relaxed rules and trying to keep residents cool.

Canadians are not alone in feeling overheated. The same high-pressure system baking the region has also produced record-breaking heat in the north-western United States, including 44.4 degrees in Portland, Oregon. 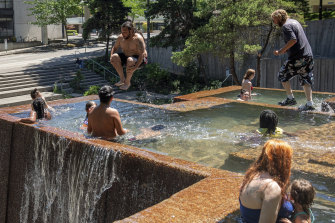 People cool off at Keller Fountain Park in Portland, Oregon, US, on Sunday.Credit:The Oregonian/AP

Emily Jubenvill, co-owner and manager at Enderberry Farm, a farm that produces organic vegetables in the northern Okanagan Valley, said she and her husband were planning to beat the heat by getting to the fields at 3am on Tuesday to pick vegetables. “Things are maturing faster under the stress of the heat, and so we’re not able to harvest as much,” she said, noting that the flavour of vegetables like lettuce could turn extremely bitter if exposed to very hot weather.

Canada’s former national heat record was 45 degrees but on Sunday, Lytton, a town of fewer than 300 about three hours east of Vancouver, reached 46.6, according to Environment Canada.

Other towns in southern British Columbia, including Victoria, Kamloops and Kelowna, are breaking local records under the high-pressure heat dome, and temperatures well over 37.7 are forecast through to Wednesday.

Previously, Midale and Yellow Grass, both in rural Saskatchewan, held the record in Canada for the highest temperature on July 5, 1937, at 45 degrees.

Western Canada’s “desert heat” is in contrast to the sultry “jungle heat” seen in eastern parts of the country, akin to temperatures and humidity felt in Florida or the Gulf of Mexico, said Phillips, the climatologist.

According to the 2018 National Climate Assessment, a scientific report by 13 US federal agencies, heat waves have climbed from two per year in the 1960s to six per year by the 2010s. The season for heat waves has also grown 45 days longer than it was in the 1960s, the report notes.

It is all part of an overall warming trend. The seven warmest years in the history of accurate worldwide record-keeping have been the last seven years, and 19 of the 20 warmest years have occurred since 2000. An analysis from the Copernicus Climate Change Service, a group of European climate researchers, found that the hottest year on record was 2020, tied with 2016.

Several school districts in British Columbia were closed on Monday, given that many buildings are not fitted with air conditioning. Temperatures rarely go above 30 in Vancouver, Phillips said.

British Columbia Hydro and Power Authority, a state-owned utilities company, saw back-to-back record-breaking electricity use at the weekend, with some local power outages reported across the system, the Provincial Crown corporation said.

On social media, people posted photographs of their pets cooling off with ice packs, putting out water trays for birds or avoiding the sun altogether.

In a weather alert for Metro Vancouver on Monday, Environment Canada warned that temperatures could reach as high as 43.8 during the day.

“The duration of this heat wave is concerning as there is little relief at night with elevated overnight temperatures,” it wrote, advising local residents to navigate the “record-breaking heat” by drinking plenty of water and avoiding leaving people and pets in a parked vehicle.

It also advised residents to watch out for the symptoms of heat illness such as dizziness, fainting, nausea and decreased urination.