Female motorcyclist sent flying when she smashes into railway barrier

This is the dramatic moment a woman motorcyclist was knocked off her motorbike by a level crossing barrier – and narrowly missed being struck by an oncoming train.

The middle-aged driver failed to notice that the red and white pole, with flashing lights, had descended to block vehicles from crossing the railway line in Chumphon province, Thailand.

Video footage of the incident shows her crashing straight into the closed barrier, striking her head on the pole, which ‘clotheslines’ her. As her body is knocked backwards, her hands are flung off the steering from the force of the impact. 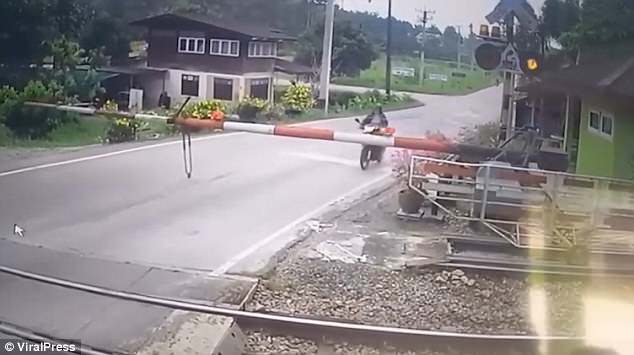 Despite the flashing lights, the motorcyclist failed to stop in time 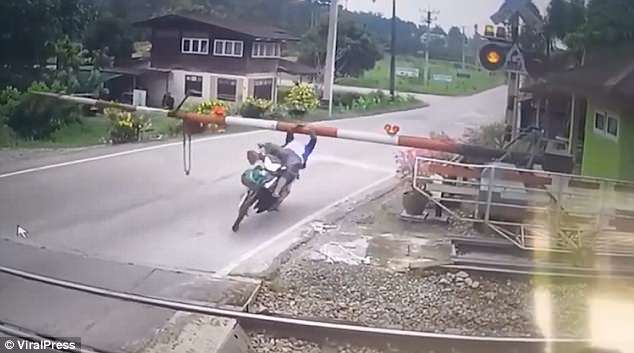 She is ‘clotheslined’ by the barrier, with her body knocked backwards

As a result, the black Honda motorcycle continues towards the line, where it topples and traps her legs, with the front wheel resting on one of the train lines.

Station attendant Phijit Meuankaew raced over to save the clearly dazed and stricken woman, pulling the bike off the tracks, before dragging her safely to her feet seconds before a train speeds by. The black Honda continues towards the tracks 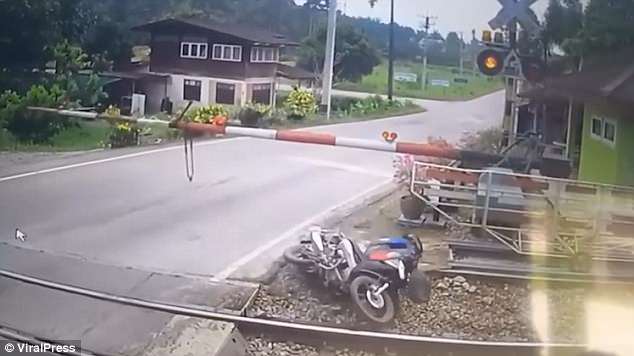 The woman was trapped beneath the bike. Seconds later, a railway official rushes to her aid, freeing her from the motorcycle and dragging both to safety

Thailand’s State Railway Department said in a statement that the incident occurred at the level crossing area at Lang Suan Railway Station at approximately 7.55am on April 28. This was the 167 Bangkok to Kantang train.’

The department urged road users to take extra care around level crossings, saying: ‘It was very lucky that the station official saw the accident and ran over, otherwise the woman would probably have lost her life and her property would have definitely been damaged.

‘This is a reminder to everyone to drive their vehicles with caution and do not take for granted someone you love.’

The video footage also showed a silver vehicle and a motorbike carrying two people ignoring the flashing warning lights and crossing the track despite the pole going down, moments before the woman crashed into the barrier.