The notorious criminal who got the very first Antisocial Behaviour Order has been jailed for six-and-a-half years for an armed robbery at a newsagents.

Kye Green was just a teenager when he was given the first ASBO in North East Lincolnshire in 2003.

The grinning troublemaker was so well-known in Grimsby that he asked for his latest trial to be moved to Hull Crown Court because he feared that he could not get a fair hearing in his home town.

In 2007, he told the Grimsby Telegraph he was turning his life around, while telling us that prison was ‘soft’ and ‘just a holiday’ and that he was proud of his ASBO.

Green, 29, of Grimsby, changed his pleas to guilty in the end and smirked as he told the judge who had jailed him: ‘Nice one.’ 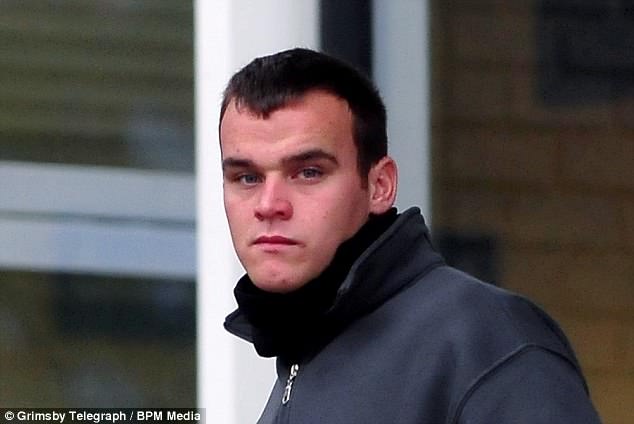 He beamed broadly at female supporters in the public gallery and told them: ‘See you soon.’

But the show of bravado slipped as soon as he got the other side of the dock custody door and he could be heard scuffling about and shouting.

He yelled to his barrister, Russell Davies, saying: ‘Russell – I’m going to appeal that.’

But the barrister, Russell Davies, who was brought in especially from Manchester as his ‘barrister of choice’ from earlier dealings, confirmed outside the courtroom that there would be no appeal against the sentence.

Green won a reduction shortly afterwards because the prison sentence originally announced by the judge was nine-and-a-half years.

The orders have been replaced bu Civil Injunctions in England, Wales and Northern Ireland.

But Asbos are still used to crackdown on antisocial behaviour in Scotland.

When given an Asbo, you must follow certain rules.

If you do not, you risk more severe punishment.

An Asbo may require you to:

Stay away from a particular place.

Work on improving your behaviour.

Fix damage you caused to another person’s property.

But the case was later revisited and the sentence was amended to six-and-a-half years because a wrong sentencing bracket had been used.

David Hall, prosecuting, said that Green and an accomplice entered McColls newsagents in Grimsby, just after it opened at 6am.

They were masked and one of them pulled out a gun and pointed it at the female shop assistant. He told her: ‘Open the till. Take all the money out or I’ll shoot you.’

The other raider passed a holdall over the counter to her. The first robber kicked a security door in and entered a supposedly protected area.

He told the woman: ‘Put all the money in the bag or I’ll shoot you.’

She felt the gun practically touching her arm and, after the till was opened, he grabbed money and put it in the bag.

The theft of the cigarettes was the undoing’ of Green because, when he was arrested, six packs of cigarettes were at his home with his fingerprints on them as well as those of the shop assistant.

The gun was found under soil and bricks at his mother’s house. His DNA was on the trigger and guard. 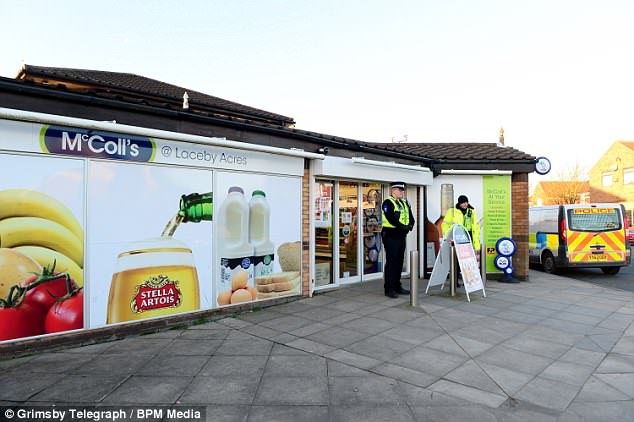 David Hall, prosecuting, said that Green and an accomplice entered McColls newsagents (pictured) in Grimsby, just after it opened

It had six live rounds and two discharged ones in the magazine. He later blamed three other people for the robbery.

The woman said in a statement that, as soon as the men walked into the shop, she thought she was going to get robbed. She started to shake and felt helpless.

‘I was frozen with fear,’ she said. ‘I put my hands up in submission. I thought I could die here. I was trapped. I had nowhere to go.’

The gun was touching the top of her shoulder.

‘As far as I was concerned, the gun was real,’ she said.

She was so shaken that, as the raiders left the shop, the woman had difficulty telephoning the police.

The victim would wake up in the middle of the night and, when somebody she did not know walked into the shop wearing black, she froze.

Green’s previous convictions included being jailed for two-and-a-half years in 2014 for kidnap against a former girlfriend involving threatening her with a razor, tying her to a radiator and threatening to kill her.

He left her locked in the house but she managed to escape through a window. He was also jailed for a year for attempted robbery in September 2012, involving an attempted handbag snatch, and had a conviction for possessing a knuckleduster as an offensive weapon in May 2014.

Russell Davies, mitigating, said that there was significant planning in the robbery but a relatively small amount of money was taken.

Judge Paul Watson QC told Green: ‘That poor lady must have been absolutely terrified. It’s still having a lasting effect upon her.’