Footage shows firefighters driving through a wall of wildfire flames

Driving into hell: Helmet footage shows firefighters tackling the Creek Fire then escaping through a wall of flames

This is the incredible moment firefighters rushed into a California neighborhood as flames ravaged homes then had to drive through a wall of flames when the Creek Fire became too dangerous to fight.

Footage from the City of Merced Fire Department shared on Wednesday showed the devastation and danger from the point of view of the heroes, providing a brief look at how brave the men and women who launched their rescue mission were within the first 12 hours of the blaze.

The helmet camera footage is from nearly two weeks ago on September 4.

Dozens of fires have burned some 4.5 million acres of tinder-dry brush, grass and woodlands in Oregon, California and Washington state since August, ravaging several small towns, destroying thousands of homes and killing at least 34 people. 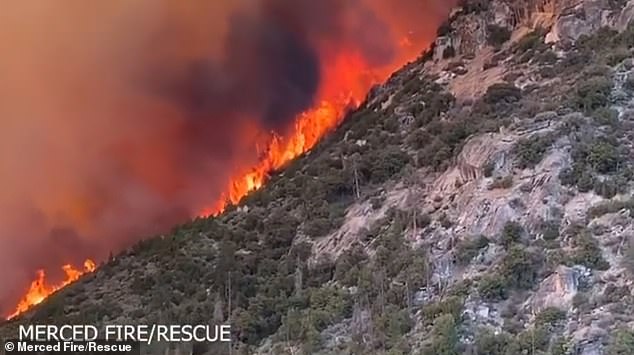 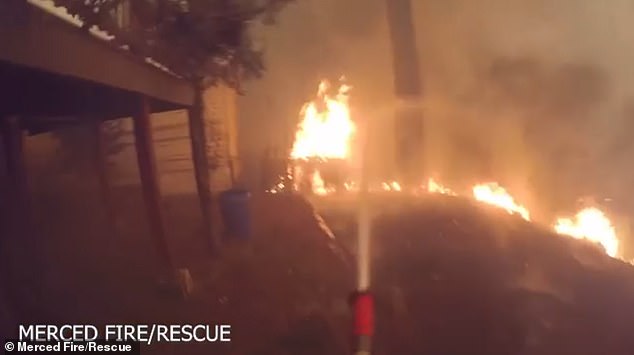 ‘It is hard for our firefighters to put to words what their feelings are sometimes,’ the fire department wrote in a caption to accompany the video on social media.

‘They work hard and right to the edge of danger, at times they are able save homes and other times they are overran. It breaks their hearts when the fire wins.’

In audio firefighters can be heard yelling to ‘go!’ before they drive towards the inferno and as smoke obscures much of the view.

With sirens blaring in the background and fire crackling, the heroes sound incredibly focused as they instruct when to hose higher in the team effort.

An establishing shot of the mountainside shows just how enormous the wildfire is.

‘OES 393 along with many other engines fought until the final moments of being pinched off by the fire,’ the department said. 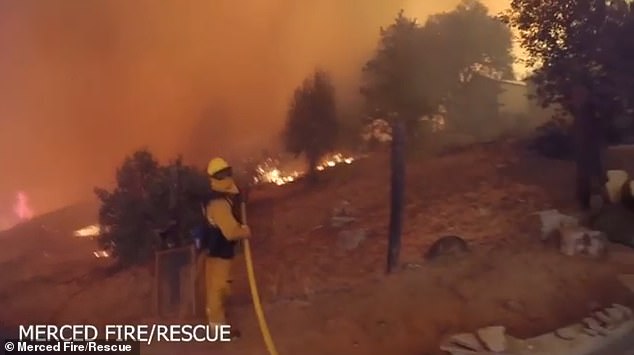 ‘OES 393 along with many other engines fought until the final moments of being pinched off by the fire,’ the department said 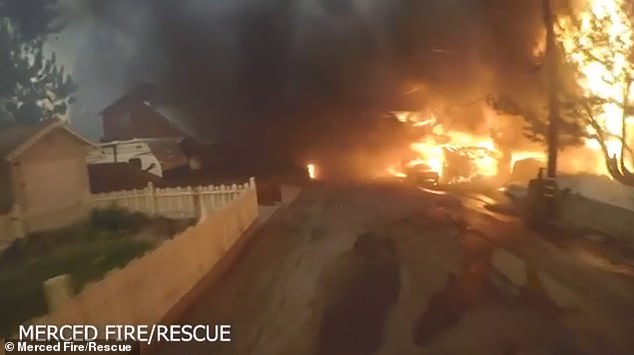 Firefighters can be heard yelling to ‘go!’ before they drive towards the inferno to get out 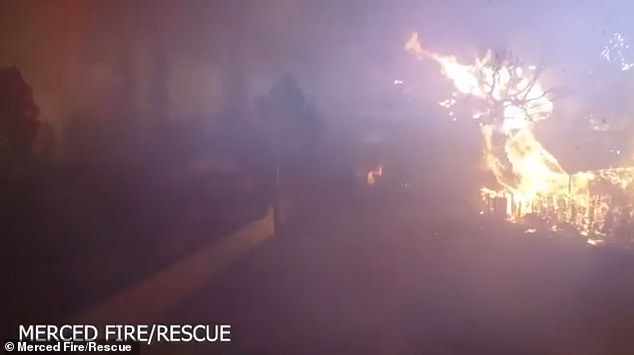 ‘The end of the road was being over ran by fire and full of engines as well. They stayed fighting as long as they ‘safely’ could. Then drove through a wall of flames to get out.’

The department assured viewers that they waited until all residents on the street where the footage was recorded approved the release.

‘We share these images so communities can see what our firefighters and many other firefighters across the nation are doing to save the homes of those they don’t know,’ they added.

‘Please be safe out there and evacuate when told to do so.’

The Creek Fire had burned 228,025 acres and was 18 percent contained on Wednesday.

The fires roared to life in California in mid-August, and erupted across Oregon and Washington around Labor Day last week, many of them sparked by catastrophic lightning storms and stoked by record-breaking heat waves and bouts of howling winds.

Weather conditions improved early this week, enabling firefighters to begin to make headway in efforts to contain and tamp down the blazes.

But California faces more devastation from wildfires that have ravaged the West Coast, authorities warned Wednesday, with strong winds and dry heat expected to whip up flames from dozens of blazes raging across the state.

Governor Gavin Newsom said although firefighters had made progress in their battle to contain more than two dozen major wildfires, so-called Santa Ana winds could fuel the relentless blazes.

The California Department of Forestry and Fire Protection (CalFire) said 16,600 firefighters were still battling 25 major fires on Tuesday, after achieving full containment around the perimeter of other large blazes. 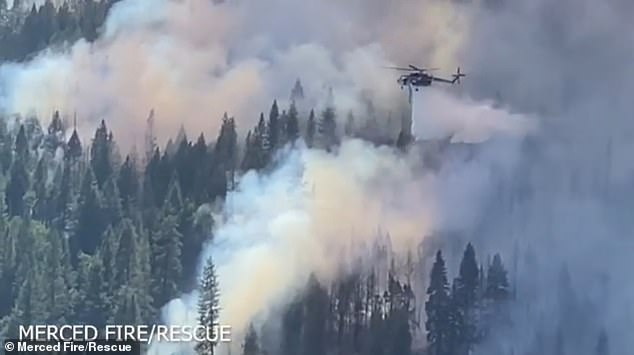 Firefighters in the San Gabriel Mountains just north of Los Angeles waged an all-out campaign to save the famed Mount Wilson Observatory and an adjacent complex of broadcast transmission towers from flames that crept near the site.

The Federal Emergency Management Agency (FEMA) has obligated more than $1.2 million in mission assignments to bring relief to Oregon and has deployed five urban search and rescue teams to the wildfire-torn region, the agency said in a statement on Wednesday.

Search teams scoured incinerated homes for the missing as firefighters kept up their exhausting battle.

The wildfires, which officials and scientists have described as unprecedented in scope and ferocity, have filled the region’s skies with smoke and soot, compounding a public health crisis already posed by the coronavirus pandemic.

Scientists in Europe tracked the smoke as it bore down on the continent, underscoring the magnitude of the disaster. The European Union’s Copernicus Atmosphere Monitoring Service (CAMS) is monitoring the scale and intensity of the fires and the transport of the resultant smoke across the United States and beyond.

‘The fact that these fires are emitting so much pollution into the atmosphere that we can still see thick smoke over 8,000 kilometers (4,970 miles) away reflects just how devastating they have been in their magnitude and duration,’ CAMS Senior Scientist Mark Parrington said in a statement.

CAMS said it uses satellite observations of aerosols, carbon monoxide and other constituents of smoke to monitor and forecast its movement through the atmosphere. 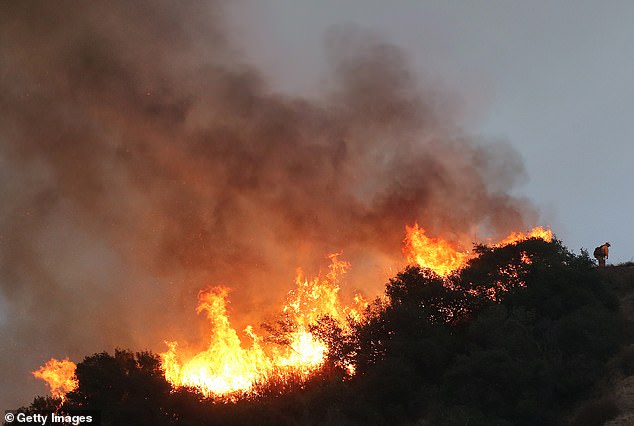 A firefighter (right) works to contain the Bobcat Fire burning down a hillside on September 15 in Monrovia, California. California’s national forests remain closed due to wildfires which have already incinerated a record 2.5 million acres this year. The Bobcat Fire, burning in the San Gabriel Mountains, has grown to over 40,000 acres 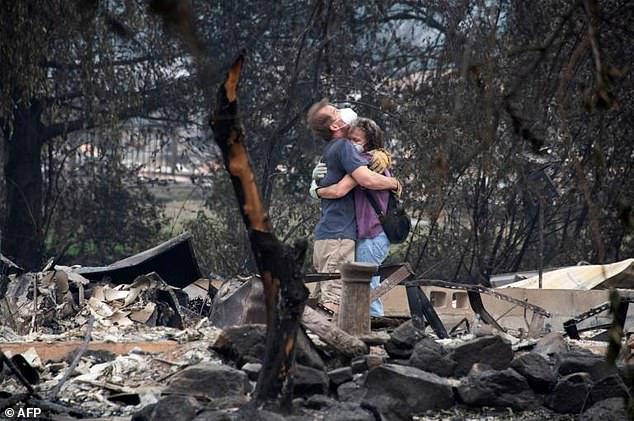 Dee Perez comforts Michael Reynolds in the ruins of his home destroyed in the Almeda Fire in Talent, Oregon, September 15 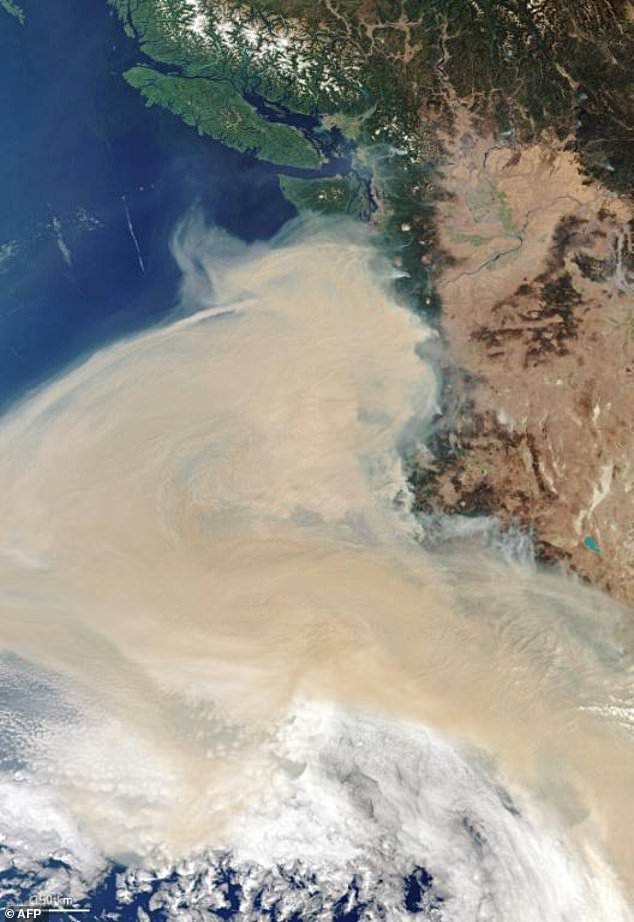 This handout image taken on September 10 from Copernicus-Sentinel-3 shows the smoke plume off the west coast of the states of Oregon, Washington and California, as fires rage across the continent