Islamabad: Former cricket star Imran Khan was sworn-in as prime minister of Pakistan on Saturday, taking on the challenge of forming a coalition to govern as a currency crisis looms over the turbulent, nuclear-armed South Asian country. 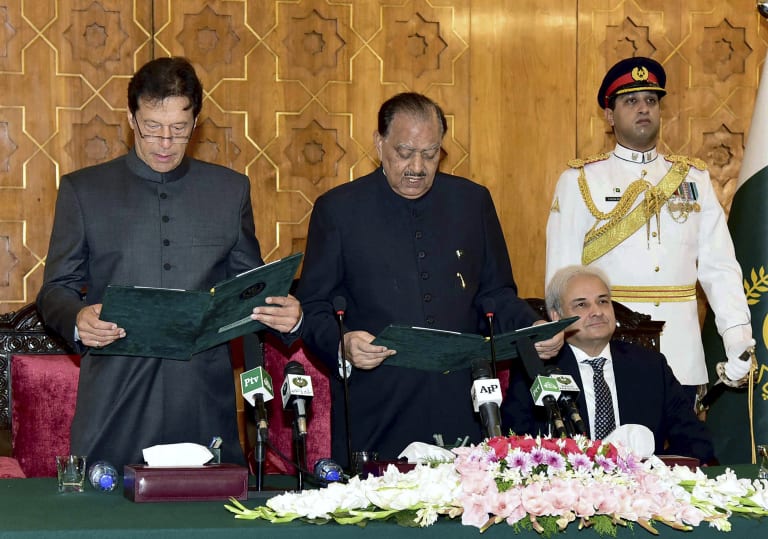 Pakistan’s Imran Khan is sworn in as prime minister.

Hours after the oath-taking, Khan's office released a partial list of his choice of cabinet ministers and also announced the candidate for the office of president.

Asad Umer, former CEO of Pakistani multinational Engro, was appointed to the post of finance minister, party vice chairman Shah Mehmood Qureshi to head the foreign office and former chief minister of the northern Khyber Pakhtunkhwa province Pervez Khattak was given charge of the defence ministry.

Khan's Pakistan Tehreek-e-Insaf (PTI), or Justice Party, picked party stalwart Arif Alvi as its presidential candidate. The president will be voted in by lawmakers from Pakistan's upper and lower houses and the four provincial assemblies next month.

Wearing a traditional black sherwani coat, in the style of his hero and Pakistan founder Muhammad Ali Jinnah, Khan recited the oath of office and vowed to respect the constitution.

"I will bear true faith and allegiance to Pakistan," Khan read from the oath, standing next to President Mamnoon Hussain. Later, he was given a guard of honour on the lawns of the prime minister's house.

Military coups have punctuated Pakistan's 71-year history, and Khan's election was only the second democratic transfer of power. If he completes his five-year term he will be the first Pakistani prime minister to do so.

His PTI has 151 of the 342 seats in the national assembly, where a vote was held on Friday to decide who would be asked to form a government.

One of Khan's first tasks as prime minister will be figuring out how to deal with a looming currency crisis that threatens to derail an economy growing at around six percent annually.

The new coalition government must urgently decide whether to ask the International Monetary Fund (IMF) for a bailout, or seek support from China, the country Pakistan regards as its most reliable ally.

Relations with the United States are frayed, with US officials fuming over Pakistan's alleged support for Taliban fighters in Afghanistan. Islamabad denies aiding the insurgents.

Following Khan's appointment, the US Department of State released a congratulatory statement stressing the importance of the strategic relationship shared by the two countries.

"The United States looks forward to working with Pakistan's new civilian government to promote peace and prosperity in Pakistan and the region," spokesman Heather Nauert said.

British Prime Minister Theresa May said on Twitter that she had spoken with Khan, adding that Pakistan and the UK shared an important relationship.

"There is plenty for our two countries to work together on, not least increasing bilateral trade and mutual security issues," May said. 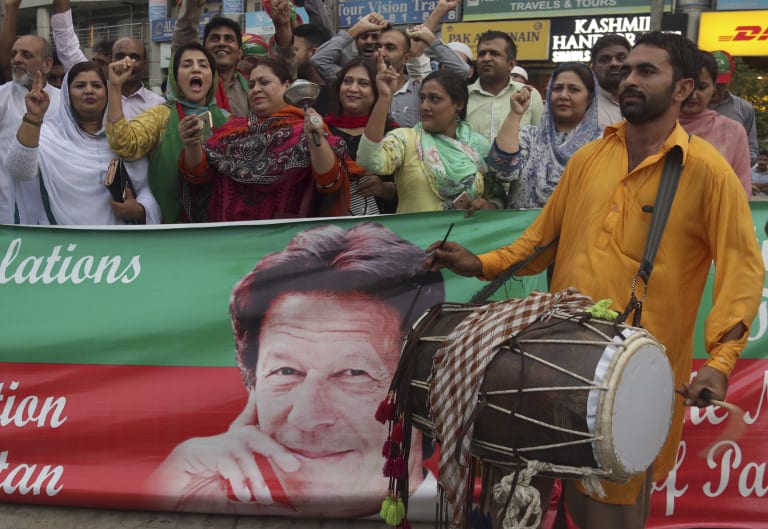 The oath-taking was attended by scores of Pakistani celebrities, sportsmen, and politicians, as well as former Indian cricketer Navjot Singh Sidhu, who serves as tourism minister for India's Punjab province.

Khan has promised to create millions of jobs and build world-class hospitals and schools in a country where more than 40 percent of the population is illiterate.

After spending much of his political career on the fringes, the Oxford-educated former sportsman rose to power on a populist platform, and in recent years his anti-corruption message has increasingly resonated with Pakistanis, especially the young.

Khan's opponents say he owes his ascent to covert support from the country's powerful military, though both the army and Khan deny collusion.

cricketer, former, Imran, Khan, sw
You may also like: