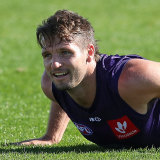 Jesse Hogan will continue his quarantine in a Perth hotel.Credit:Getty Images

The 25-year-old returned to Perth on September 21 and was required to isolate at home until October 6.

WA Police said the night after Hogan arrived home he breached the requirements twice by allowing a woman to visit him.

He has been charged with two counts of failing to comply with a direction and will face court at a later date.

Hogan told the Dockers on Tuesday evening he had been visited at his home by police and confirmed he had a female visitor attend his home, in breach of WA quarantine orders.

“Our players and staff are all well aware of the restrictions they are all required to comply with while in quarantine and the broader obligation the club has to the community to do so,” CEO Simon Garlick said.

“We have worked very closely and effectively with WA police, the State government and the AFL throughout the year, which provided us with the opportunity to complete our AFL season.

“The cooperation and understanding we have received from all parties during the season is something we do not take for granted. This makes the breach even more disappointing and incredibly frustrating.

“We will wait for Jesse to complete his hotel quarantine before determining what club-imposed sanction he will face.

“In the meantime, we will be reinforcing with all quarantined players and staff the importance of strict adherence to their quarantine protocols.”

The club has also advised the AFL of the matter.

Fremantle's lauded recruitment of Hogan was thrown into chaos on the eve of the 2019 season when the player flipped his Volkswagen SUV after crashing it into a parked car in Perth's south in the middle of the day outside the Bicton home of teammate Joel Hamling.

Hogan also spent time away from the club in 2020 to deal with mental health issues.