A French surgeon accused of sexually abusing more than 300 young children, mainly his hospital patients, has been jailed for 15 years in the country’s biggest ever paedophile case.

Joel Le Scouarnec, 70, was found guilty of rape and sexual abuse in a trial involving four underage victims, but prosecutors say there is evidence that he abused up to 312 victims between 1986 and 2014.

During the investigation, prosecutors found diaries belonging to the surgeon in which he detailed sex scenes with children, although Le Scouarnec claimed they included an element of fantasy.

After admitting rape at the trial in Saintes this week, the once-respected doctor and father-of-three was sentenced to prison and may now face a second trial.

Joel Le Scouarnec, pictured, was found guilty of rape and sexual abuse in a trial involving four underage victims, but prosecutors say there is evidence that he abused up to 312 victims between 1986 and 2014.

The four victims whose ordeals led to Le Scouarnec’s trial included a four-year-old child who was a patient at the establishment where he worked.

‘We are really satisfied… it’s a fair sentence,’ said Francesca Satta, the lawyer for one of the victims, who had reported Le Scouarnec in 2017.

In his final words to the court, Le Scouarnec said he did not expect leniency, according to lawyers present at the trial, which was held behind closed doors.

‘I do not ask for forgiveness or compassion… only the right to become a better man again,’ he was quoted as saying.

Le Scouarnec remained impassive as the verdict was read out on Thursday, keeping his arms crossed without a glance at his victims, who embraced each other, overcome with emotion.

‘He explained that he had a lot of regrets… without necessarily asking for an apology. He knows that what he did is unforgivable,’ his lawyer Thibaut Kurzawa said.

Le Scouarnec was charged in 2017 after testimony from one of his victims, and the investigation quickly uncovered three other cases.

Prosecutors say searches of Le Scouarnec’s home uncovered archives detailing sexual assaults or rapes of as many as 312 victims, including adults and children. 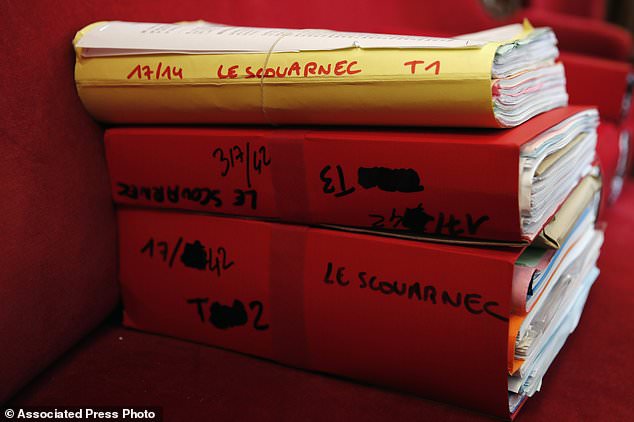 The judiciary files relating to Joel Le Scouarnec are displayed on the opening day of his trial in the courthouse in Saintes, western France

Next to each child’s name was a description on the nature of the sexual acts inflicted on them, according to investigators, although Le Scouarnec claimed the diaries were partly fictional.

Police also found more than 300,000 indecent images of minors, including pictures of two of the victims in his trial.

Investigators say that under cover of medical acts, the doctor sexually took advantage of children as soon as they were alone in the hospital room.

They say he targeted patients so young they might not remember or understand what was happening.

He also targeted older children in the operating room, when they were asleep or under anesthaesia, according to the diaries.

Questions arose during the trial about why nothing came out before and whether some people may have been aware of the alleged abuses.

The surgeon had already been sentenced in 2005 to a four-month suspended prison sentence for possession of child pornographic images.

No date for a second trial has been set yet. About 30 other identified cases cannot be brought to court, mostly because the alleged facts occurred too long ago to prosecute.