Follow
Home » World News » From the Archives, 1894: The last days of Martha Needle, the Richmond poisoner

The last scene in the tragedy known as the Richmond poisoning case was enacted yesterday morning, when Martha Needle, sentenced to death by Mr Justice Hodges on the 28th September last for the murder by arsenical poisoning of Louis Juncken, was executed in the Melbourne Goal. 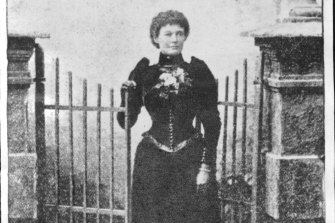 Precisely at 10 o’clock the sheriff of Melbourne, Mr Ellis, proceeded to the cell adjoining the scaffold, and producing the warrant for the execution demanded the body of the prisoner. A few moments later the condemned woman came upon the scaffold, supported by two warders, and attended by Rev. H. F. Scott, her spiritual advisor.

The sheriff asked her whether she wished to make any statement, and she replied in a low but firm voice, perfectly audible to the few persons whose duties compelled them to be present, “I have nothing to say, thank you, sir.”

She then walked to the centre of the drop, apparently without need of assistance; the executioner quickly adjusted the rope, and in less than two second the lever was pulled, the drop fell, and the last penalty of the law had been enacted.

Mrs Needle maintained her impenetrable demeanor to the last, and although she listened respectfully to the exhortations of the Rev. Mr Scott, and evidently appreciated the kindly ministrations of Mrs Hutchinson and Sister Esther, she asserted her complete innocence of the crime for which she was about to suffer up to within a few minutes her execution.

The trial of Martha Needle, on a charge of having murdered Louis Juncken at Richmond, was concluded in the Criminal Court yesterday, before Mr Justice Hodges and a jury of 12. Mr Finlayson prosecuted for the Crown, and Mr Gaunson defended the prisoner.

His Honor, after a few prefatory remarks said the jury must remember that the prisoner was being tried for the murder of Louis Juncken only. The facts relating to the cases of Hermann Juncken and the Needles were only referred to in order to enable the jury to say whether or not Louis died from poison, and whether it was administered intentionally or accidentally. 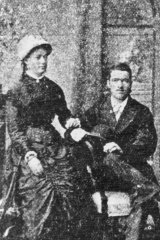 Martha and Henry Needle soon after their marriage in 1968.

The prisoner seemed to have been deeply attached to Otto Juncken in April, 1893, as was shown by the impassioned letter which she wrote to him. He urged her not to commit self-destruction, and he also entered into an engagement to marry her.

Otto, in giving evidence against the woman he loved, had conducted himself in a way that inspired absolute confidence in his Honor’s mind, as his demeanor was manly, noble and generous to a degree.

It appeared that the prisoner suspected a coolness towards her on the part of Louis, who, it seemed, wished to prevent the marriage; and if she was a person who held human life lightly this might have been a motive for the alleged crime.

The Crown said that Louis Juncken died from arsenic poisoning, and the defence, from what he could gather, was that this allegation had not been proved. Dr. McColl was of the opinion that Louis had Rigg’s disease, but nothing was done till 30th April, when Mrs Jones came to nurse him. She left on 8th May, and now came the part in which the Crown took up a decided position.

The Crown said that on the evening of 10th May, just after an improvement took place, prisoner purchased a box containing arsenious acid known as Rough on Rats. On the day afterwards Louis Juncken became worse again, and on 12th May he was dead.

What occurred a short time afterwards?

In consequence of something which took place after his death, suspicion was aroused, and the body was exhumed and a portion of it analysed. It was said that they had nothing to do with the honest of Mr Blackett, but they had everything to do with his honesty and capacity.

The body was exhumed, and Dr. Neild took the stomach and the intestines, and one lung and the heart, which were enclosed in separate jars and sent to Mr Blackett, every precaution having been taken to cleanse the vessels.

What they could be certain of was this: Mr Blackett had absolutely found arsenious acid in the body, in the stomach and intestines; and according to the modern medical opinion arsenic was no part of the human body, and Juncken had taken no medicine so far as they knew with arsenic in it.

The jury had to be satisfied that the prisoner administered the poison, and intentionally administered it. One might suppose and probably believe that if great care was not exercised in cleaning a spoon, knife or other article that might have been used that poison might innocently have gotten into the stomach.

What they wanted to know whether a particular person had taken arsenious acid what did they do? They would first not the symptoms in the case, and then ascertain what were the symptoms of another person under like conditions.

With regard to Elsie the evidence was somewhat weaker. The evidence of arsenic and vomiting was less clear. Only an infinitesimal trace was found in the body. In the body of May there was found 2.81 grams of arsenic, and the doctor said in regard to her that vomiting was the chief symptom – it was constant. He said if poison was found in her body he would have no hesitation in saying the death was caused by poison.

Now His Honor came to that part of the case which possibly core most hardly on the prisoner. It was very extraordinary in all its circumstances and surroundings. Hermann Juncken appeared to have come over with Otto from South Australia on 2nd June. Hermann told her it would be better that she and Otto should not live in the same house. She not unnaturally resented this suggestion.

Up to that time Hermann seemed to have been regarded as a friend. He had partaken of meals prepared by her, and there had been no symptoms of anything wrong. The morning afterwards he was seized immediately after breakfast with vomiting. He had eaten that morning some fried eggs which his brother had cooked and breakfast was given to him by the prisoner.

He went to Mrs Smith’s and remained there on 6th and 7th May. The vomiting had ceased. He returned to the prisoner’s on the 8th at about 12 o’clock and had some tea and bread and butter. He was taken ill again and vomited. He went back to Mrs Smith’s and saw a doctor, who at this time appeared to have some suspicion aroused.

The doctor asked him to keep his vomit, which he did. The doctor subsequently gave it to Mr Blackett. When the vomit was examined and traces of arsenic were found in it, then suspicion was thoroughly aroused, and in consequence of what the detective suggested Hermann went to the prisoner’s house on the 13th. She asked him if he would have lunch, and she prepared tea and some other things. The detective then came in, and the tea poured out for Hermann was placed in one vessel, while the tea she had poured out for herself was placed in another.

They were analysed, and in the cup from which the prisoner was drinking no poison was found, but in the cup handed to Hermann there was 10.5 gr. It was said that proper precautions were not taken to wash these things, but it would be singular if one vessel should have arsenic in it by some chance and none of the others had. It was difficult to see how such a set of circumstances could arise.

Did they believe that the police or anybody else put this poison in the cup? If not how did it come to be there? In all other persons the symptoms were the same, and in every one of their bodies there was arsenious acid. There was no medicine, no bismuth, no calomel in this case. The jury had to deal more with probabilities, and they had to say whether, having weighed all these facts, they satisfied them that Louis Juncken died in consequences of arsenious acid in his system, and that the arsenious acid was administered by the prisoner, and that she intended to do so.

The jury had to remember that a human being’s life was now at stake. They had to weigh the evidence and remember the solemn duty they had to perform and the result was not to be arrived at lightly but only on satisfactory evidence.

The jury, after deliberating for about three-quarters an hour, returned into court, and intimated that they found the prisoner guilty of murder.

On the prisoner being asked in the usual manner whether she had anything to say, she said in a low but firm voice, “I am not guilty. It is undeserved, I am not guilty of this charge.”

His Honor, in passing sentence of death said, “Martha Needle, it is not my intention to keep you one moment in suspense. If conscience is not already doing its work nothing I can say will have any effect. It is my duty only to pronounce the sentence of the court.”

The death sentence was then passed in the usual form, and the prisoner, who went through the terrible ordeal with great courage, was then removed.