From the Archives, 1996: The Port Arthur massacre 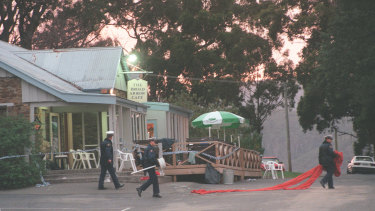 Police are still to formally confirm whether an elderly couple and a possible third victim died while being held hostage by the gunman at a local guesthouse. Their deaths would bring the Port Arthur massacre death toll to 35.

The couple, Sally and David Martin, had been taken hostage at the guesthouse by the gunman late yesterday after he embarked on a shooting rampage at the nearby Port Arthur historic site, killing at least 32 people and injuring 19 others. A third person is believed to have been kidnapped by the gunman.

Police captured the gunman, a 29-year-old man from the Hobart suburb of Newtown, after fire engulfed the guesthouse where he had kept police at bay last night.

There was no indication whether the hostages were shot or died in the raging fire that was lit at about 8 am and destroyed the Seascape guesthouse.

The stand-off ended just after 8.30am when the gunman staggered out of the blazing house tearing off his burning clothes. He was arrested by members of the Tasmanian and Victorian special operations groups, which had surrounded the house overnight. 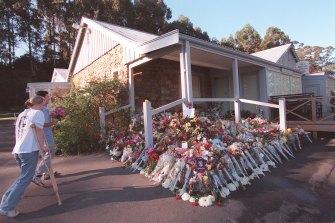 Flowers placed outside the Broad Arrow Cafe in Port Arthur where the rampage began.

Police say the house has been burned to the ground and explosions prevented firemen from extinguishing the flames immediately and checking the site.

The gunman was taken by ambulance to the Royal Hobart Hospital suffering burns. He is expected to appear in court later today but it might be a bedside hearing.

The hospital’s chief executive officer, Mr Ian Pynes, said all patients at the hospital had been informed that the gunman was being treated there. He said security had been stepped up and the gunman’s ward was being guarded by police officers.

Mr Pynes said the gunman was likely to remain at the hospital for three days.

The hospital denied rumors that the gunman was a psychiatric patient on weekend leave, saying he had not been a patient at the hospital for several years.

Tasmanian police said they had no clues about the gunman’s motives. The deputy commissioner for Tasmanian police, Richard McCreadie, said it was not the role of the police to speculate.

“The chain of events seemed to have its origins in a restaurant where quite a number of people suffered gunshot wounds and subsequent death . . . It seems whoever was responible drove the car to the southern side of the boom gate and that is where another three people met their fate,” he said.

The gunman first entered a local restaurant where 20 people were shot dead. It is not clear whether anyone left the restaurant alive. 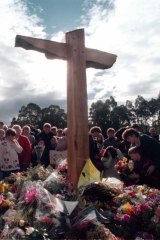 Mourners pay their respects at a memorial site for the 35 victims.Credit:Bruce Miller

The gunman then left the restaurant and began shooting at a tourist bus nearby where another three people died.

He then got into his car and went to a toll booth. It was here that the mother and her children were shot.

The gunman then proceeded through the toll gate, got out of his car and commandeered another vehicle, shooting dead the four occupants.

He then proceeded to a service station where he shot a woman standing on the driveway.

It was at the service station that the gunman is believed to have taken a man hostage and bundled him into the boot of the car he was driving. He then drove to the guesthouse from where he held police at bay.

The elderly owners of the guesthouse, believed to be a married couple in their late 60s, were also taken hostage.

Police said the couple were close friends of the gunman’s father.

Eighteen shots were fired during the night and police said they had no evidence that the hostages were still alive.

Police did not return fire.

It is believed that the gunman has a financial interest in a property near the site.

Little is know about the man, except that his father died three years ago in a possible suicide.

Police have spoken to his mother, an uncle and a girlfriend, but none of them had spoken to the gunman.

The gunman does not have a police record, nor does he have a gun licence or a history of gun ownership.

Weapons used in the massacre were heavy-calibre army type rifles including an AR-15, already recovered from the gunman’s car, and an SKS assault rifle that police believe was already at the guesthouse.

The coroner has taken charge of the scene at Port Arthur with most of the bodies still where they fell.

Mr McCreadie said that since midnight police had not been able to get through to the gunman because the telephone at the cottage was continually engaged.

He would not speculate on why it would be engaged, but would not rule out the suggestion that a media organisation was occupying the line.

Prior to the communication breakdown the gunman would not confirm to police that the hostages were still alive, but indicated that they were.

Mr McCreadie said the incident was “absolutely tragic” and that there was a “monumental problem” in terms of managing the site and removing the bodies.

He said he could not be confident police had found all the victims.

Witnesses to the massacre told police the gunman had driven to the site in a Volkswagen with a surfboard on top; he had carried a tennis bag into the small restaurant at the site.

He had been chatting to people “quite lucidly” before pulling the automatic rifle from the bag and shooting people indiscriminately, including children, staff, locals and tourists.

He left the site, shooting as he went, “shooting everybody he could see,” said Wendy Scurr, who was working at the front desk of the historic site.