Life without Brian, but it goes on for Pete's sake

And so, with the avuncular grin and those familiar blue eyes sporting a suggestion of a tear, he said the words: "For the last time, may your news be good news … and farewell."

After 40 years, Brian Naylor, the newsreading "freak", finally did what he has talked about for nearly a decade: he wiped off the make-up, farewelled his colleagues and walked away to pursue, among other things, his passion for sailing on his 16-metre yacht called, yes, Skeddadle. 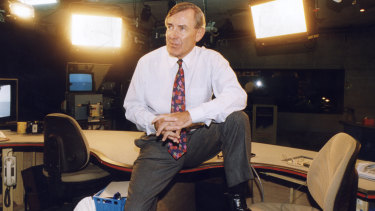 "It's sort of starting to hit me now," Naylor said just before reading his last bulletin. "It's been so overwhelming. People are saying, `You don't realise how much people will miss you.' The letters and cards that have been flooding in are lovely."

It was an emotional day. Naylor decided to give his final pre-retirement interview to Ernie Sigley. They worked together 40 years ago. "I felt that was appropriate," he said. "As Ernie was signing off there was six seconds of silence. I thought we were off air. Then he said, `What can I say, I love you, mate.' Then broke down in tears, walking round the studio, dabbing his eyes.

"I said, `Nobody can pay me a higher compliment than the one you're paying me now'."

"It's very sad," said John Sorell, the veteran news director who hired Naylor 20 years ago. "We can't believe it's finally happened. It's an atmosphere I haven't seen since Eric Pierce left. Coming to grips with life without Brian will not be easy." 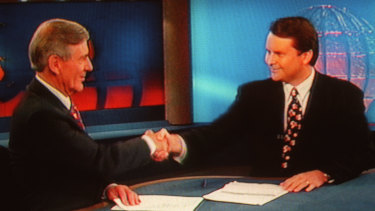 Sorell knows this more than most. His career at Nine has coincided with Naylor's long ratings reign. He has decided to ease the succession, by staying for at least the first year of Peter Hitchener's reign.

"It's been a marvellous 20 years." Three years ago, Sorell said: "Without Brian Naylor I wouldn't have made any progress in this industry … I've been blessed with one great thing in my life and that's Brian Naylor."

"We all have periods in our lives when we feel it is the right time to do things," Naylor said. "I've had a wonderful time at Nine and promised myself I wouldn't do what I've seen some footballers do: play one season too many.

"I've never wanted to slide down the hill. I'm finishing on top."

He certainly is. And Nine is preparing to honor him at a gala black-tie farewell party at the Regent Ballroom on Monday night with an invitation list that includes the Kennetts, Shane Warne, Naylor's Sydney stablemate Brian Henderson, Ray Martin and friendly rivals Seven's David Johnston and Ten's Mal Walden. 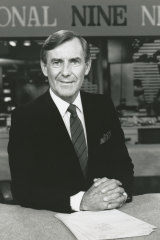 Brian Naylor at the Nine newsdesk

But celebrations are not on Seven's mind. Over in Dorcas Street, the newsroom is bracing itself for the biggest battle of its life: an assault on the coveted news ratings. Finally, the greatest hurdle to Seven competing with Nine's ratings dominance has kindly removed himself. The news battleground is as close to a level playing field as it will ever get.

Seven news director Neil Miller assembled the news troops on Friday 13 November for a pep talk. The superstition of the date was ignored. After all, the terrifying spectre of Brian Naylor had haunted Channel Seven long enough that very little now scares them.

"He (Miller) said, `If ever there was a chance, this is going to be it'," remembers a Seven insider. "It was going to involve revitalising our news, trying to break more stories.

"The indication was `We are the football station and we don't take advantage enough of that fact and break enough good football stories'."

"Changes always create opportunity," Neil Miller told The Age. "My central message at the meeting was you can't worry about what Nine is doing. The challenge is to do better next year. They're realists about what we do. It's not like a football coach saying `Get out there and kill them'."

Realism is not a bad state of mind for Seven. As the rest of the TV world contemplates life after Brian, it is instructive to look at Thursday night's ratings to see what sort of work has to be done. Nine's news rated 25 and 24 for the two quarter hours, while Seven's came in at 13 and 14. On the other side of the vital hour, A Current Affair rated 19 and 17 against Today Tonight's 12 and 13.

Still, with Peter Hitchener finally gaining the throne after a 20-year apprenticeship, and with the more blokey Mike Munro taking the seat of the warm and gentle Ray Martin, Nine's flank is slightly more exposed than it was a week ago.

In Seven's quieter moments, they like to fantasise Nine can be taken. But even when the network bumps along a slightly rocky road as it did this year, the ratings continue to be strong. The Nine fortress has again managed to withstand another year of bravery and bluster from Seven.

Nine's general manager Ian Johnson said it had been a sensational year, but there have been more bumps than Nine would have liked, especially in the personnel area. In an off-field skirmish, The Footy Show regulars Jason Dunstall, Doug Hawkins and Harvey Silver departed en masse for Seven's Live and Kicking. James Hird, a key drawcard for the program, signed a long-term contract with Seven.

Nine variety veteran Denise Drysdale skipped over to Seven, most sports production in Melbourne was shut down, Midday, The Price Is Right were cancelled and In Melbourne Tonight was put out of its and viewers's misery. On top of that, a tired Wide World of Sports became less wide, being halved to two hours.

Mostly, these decisions were to do with cost-cutting. But a bit of judicious pruning of less-than-healthy branches is vital for the health of the tree. Don Burke could have told the network that.

But the network that is unused to losing also suffered some business defeats. Nine lost between $8 million and $11million on its coverage of the Commonwealth Games. It lost the television rights to cricket from England, including the Ashes in 2001. It was a losing candidate for the construction of the Docklands Stadium in Melbourne, and was a losing candidate for the first and last refusal for the television rights for the AFL.

Ian Johnson shrugs. "That's what business is all about. You win some, you lose some. You can't win everything.

"It's very difficult to get too disappointed about it. We've lost one survey in the last 92, so our record is two weeks lost in 120 ratings over the past three years. "So how disappointed are we at missing out on AFL? Well, disappointed because I am a mad football fan, but from a business point of view we haven't got anything to complain about." 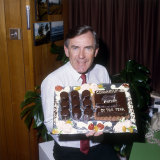 Brian Naylor holding a cake for Father of the Year.

Johnson said Seven, who won the rights, were "faced with a bigger dilemma than us because they have to squeeze the AFL in and they have to decide which product will suffer."

Johnson said despite scaling down Wide World of Sports ("It's been around for a long time and viewers were showing in the ratings they wanted to see sport done differently"), Nine still did "heaps of sport", including the Formula One Grand Prix, "the biggest outside broadcast project in the country".

But last night, all this was put aside. It was Brian Naylor's day, and nothing was going to spoil it. Nine has for years wanted Naylor to keep turning up at 3.30 for the 6pm read. They gave him his 16 weeks leave, paid him his estimated $1million a year (he was worth every cent) and commissioned travel specials for him to host. If Naylor was happy, the station was happy. And usually everything went smoothly.

But for virtually the only time in a 40-year career, and 20 years at Nine, Naylor was once news himself. Eight years ago, Sorell described Naylor as "a good-looking man who smells nice", a comment Sorell would almost instantly regret.

Sorell offered his resignation four times to the network for the "hurt and humiliation" he had caused. He said five years later: "I don't think you can have a job for that long without having periods of indecision. He was trying to say his life needed a bit of a kick … that was a glitch we've recovered from. You don't work with a guy for 18 years without having a glitch."

Sorell, the Bear, was tamed. And since then there have been no ripples on Nine's golden pond.

But an angry Naylor would like to clarify one thing: a quote that keeps appearing that he was "bored silly" and his life was a "complete bloody waste" was wrong and out of context. "That was from a comment I made 10 years ago that it was boring sitting at traffic lights. That was all. It was an enormous beat-up. It was blown up into a headline about me being bored. To be misquoted to that extent was extraordinary.

"My life was at that stage absolutely terrific, I was enjoying life and newsreading enormously. I got letters from every community service saying, `We can find you jobs on Meals on Wheels if you're bored.' It was very embarrassing."

Meanwhile, Sorell is looking forward to the challenge of a Brian-free news service.

"There are absolutely no nerves," he said. "We believe in ourselves and have great faith in Brian's successor. There is no suggestion of panic or bewilderment or `How are we going to handle the future?' We have the future well in hand."