From the Archives, 1998: Two scuba divers lost, left behind in open water

In the depths of despair

The stab of a finger on a hand-held counter sealed the fate of two young Americans abandoned on the Great Barrier Reef this week. 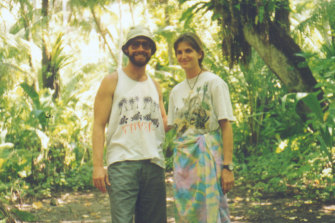 Tom Lonergan and Eileen Lonergan were left behind on a tourist diving trip.

When it is time to go, most of the dive boats working the reef use the same procedure: a blast on a whistle to get people out of the water, a head count to make sure everyone is on board, and then the ride home after the sort of fun-in-the-sun day described by another satisfied American tourist as "better than mango and bourbon".

But for Thomas Lonergan, 33, and his 28-year-old wife, Eileen, last Sunday's outing was a one-way trip to St Crispin Reef, 38 nautical miles north-east of Port Douglas. If they ever came up from their last dive during the afternoon, they would have surfaced in an empty world of exotic blues.

From a boat, it is one of the wonders of the world, the black-blue of the distant deep and the azure blue of the shallows.

But take away the boat and the Lonergans would have been utterly alone; beauty would have melted to fear. Maybe they saw the MV Outer Edge motoring back to port. The crew was serving savories, the bar was busy and, in the jumble on the decks, no one had noticed the Americans' unattended bags.

There was about five hours of daylight left and the couple was two to three kilometres from three pontoons that are used to tie up the dive boats for part of their day-long tours of the reef. The Lonergans were experienced, certified divers and they appeared to be in good health, so they probably could have made it to one of the pontoons.

But could they see them from absolute water level? Had either of them even bothered to make a mental note of their direction? Most people paying $160 for the day may reasonably assume they are paying others to worry about such things.

The brochures paint an idyllic picture of the reef but St Crispin is on the outer edge, where locals say the winds and the currents can be fluky. A local dive boat operator says they go in all directions; because it was two days before aircraft went out to look for the Lonergans, the police had to quadruple the search grid.

There are two threads to the investigation that has tripled police numbers in normally sleepy Port Douglas. Most of the effort is going into examining the conduct of the crew on the Outer Edge, which worked from Port Douglas for years before it changed ownership early last year.

The operations manager of Outer Edge Dive, Tom Colrain, has refused to comment.

The other thread is more troubling. Pro forma questions by reporters expecting to hear the police dismiss any suggestion that the Lonergans might have committed suicide elicited this response from the head of the search, Chief Superintendent Col McCallum: "I can confirm that a note has

been found in their possessions indicating the possibility of some personal trauma . . ."

And he described the loss of the couple as an "apparent" tragedy. On Thursday, Superintendent McCallum refused to elaborate, but yesterday he said the police did not consider the note in a personal diary found in a safe at the couple's Cairns hostel to be a suicide note.

Thomas Lonergan was described by one of his brothers as "a regular Joe". He was a balding chemical engineer; his dark-haired wife was a teacher. They loved the outdoors and were big on camping and bushwalking.

They married nine years ago, "straight out of college", said Thomas's mother, Elizabeth Lonergan. The big adventure in their life began three years ago when they joined the US Peace Corps, volunteering for posts in Fiji and elsewhere in the South Pacific.

The two were inseparable, his mother said. "They were never alone. We used to laugh at them how they would do everything together. I still hope they will call and tell me they have been found."

APPARENTLY there was a head count before the Outer Edge left St Crispin. Clearly it was wrong. The regulations call for detailed manifests of all passengers, including an address so that they can be tracked, if need be, after the trip to the reef. Scuba divers must also be separated into groups based on experience; there are separate groups again for snorkellers.

It appears the Lonergans were not logged back on to the boat after their last dive or counted before it headed back to Port Douglas.

One of the vessel's owners has insisted to Graeme Connett, another dive boat operator, that there was a count. But a crewman, Karl Jesinenoswski, is not so sure. He said he could not be certain there was a head count or log entries last Sunday.

Passengers recall heads being counted but the numbers can't have been right. Yet the number must have appeared to be right to support Connett's account of the crew's lack of interest when the Lonergans' bags were found.

He told 'The Sunday Age' that the crew had the right number of bags and assumed that whoever owned them had disembarked at Port Douglas, leaving the bags behind. This was why the bags were thrown in a corner: surely their owners would be back?

Were the passenger manifest, the diving log and the head count figures examined at this stage? Apparently not, because that was Sunday evening and it was not until Tuesday evening that someone bothered to open the bags, ascertain their ownership, realise the mistake and call the police.

DESPITE the industry's safety claims, other divers have been left behind. In 1993, 16-year-old Victoria Bryan drowned when she was left on a reef near Green Island.

This week, Tony Hudson, a 34-year-old Cairns businessman, told how he and a friend would have been left early last year had he not been accompanied by quick-thinking friends.

One of these, Rem Davis, 33, said: "The whistle blew for people to return to the boat; the crew walked around with counters, counting the people. I think they did it twice, they thought the first count was inaccurate but they said that the second showed that all were on board.

"When I couldn't find Tony and his mate, I searched the boat and then reported to the crew. Then we went back to get them."

The Queensland Government is worried about the impact that the incident will have on the lucrative reef industry. Diving is a $110-million-a-year business, with a further $340 million worth of hotel and travel piggybacking it.

When Bill Clinton came to town for two days in 1996, Port Douglas partied for the President in the hope that the accompanying media would tell the world about them.

Now the callers from US radio stations want to know how two of their citizens could be abandoned on a reef and the State Government is pondering if this really is the right time to counter the Asian downturn with a planned promotion in North America.

It's all done with slick one-liners and slogans. Sadly, Outer Edge Dive's slogan this week didn't sound quite right: "To The Edge . . . And Back."