Two students are dead and another was fighting for his life in hospital last night after a gunman opened fire on his own tutorial class at Monash University yesterday. 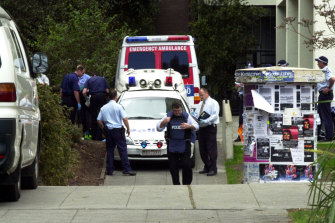 A police car sits outside of the Menzies Building where the shootings took place.Credit:Wayne Hawkins

The man walked into an econometrics tutorial about 11.20am, carrying at least two small handguns. He opened fire, instantly killing two students aged in their 20s and injuring five others, including his lecturer, Lee Gordon-Brown.

Police and ambulance officers praised the courage of Dr Gordon-Brown and fellow academic Brett Inder, who helped overpower the gunman and avert what one policeman said could have been “a major disaster”.

Dr Gordon-Brown was shot at least once as he and several students wrestled the gunman to the ground.

Dr Inder, an associate professor of economics, rushed into the tutorial room from a nearby room and helped to disarm the man, who had up to four guns. Dr Inder also helped to treat the wounded while they waited for paramedics.

One of the injured, a 30-year-old man suffering abdominal wounds, was in a critical condition in the Alfred Hospital last night after being flown from the university.

Four others, including Dr Gordon-Brown, were also taken to hospital with gunshot wounds. A woman was shot in the jaw and others suffered multiple wounds, including a man in his 20s who had surgery at St Vincent’s Hospital to reattach a finger.

The first paramedic to arrive at the scene, Paul Howells, said: “The people on the floor at the time were just unbelievable. They definitely saved lives. One of the men in the class managed to disarm the gunman, secure the weapons and treat two of the patients.

“Credit should also be given to the attending ambulance officers, who did a superb job. The death toll could have been much worse.”

Thanh Huynh, sister of Lee Huynh, one of the victims, said the attack was indiscriminate.

“He was in a tutorial room… I think there was meant to be a presentation by the gunman today,” she told Channel Nine. “I said, `What happened?′ and he said the guy, the gunman, just went berserk and started shooting everyone and he was unfortunately one of the ones that got shot in the legs.”

Mr Xiang was arrested at the scene, showing no resistance to police.

He was initially taken to the Glen Waverley police station, but last night was being questioned by homicide squad detectives at the St Kilda Road police complex with help from an interpreter.

Superintendent Trevor Parks confirmed that the man being questioned was a student in the class where the attack took place.

He said a tutor and a student were believed to have wrestled the gunman to the floor, immobilising him while others called the police. He said there were fewer than 10 key witnesses to the attack.

“If the gunman hadn’t been subdued at the time it would have been a major disaster,” Superintendent Parks said. He said the alleged gunman was in his mid-30s.

The wounded suffered gunshots to the legs, arms, backs and shoulders, with up to four of the victims receiving multiple gunshot injuries, he said.

The attack happened in a tutorial room on the sixth floor of the Robert Menzies Building at the university’s Clayton campus.

Students said scenes in the 11-storey building were chaotic immediately after the shooting, with students rushing crowded escalators to escape. At one stage, some thought the gunman was loose in the student union building, opposite the Menzies Building.

Student newspaper editor Jesse Macneal-Brown said: “We were very concerned about the lack of effective communication. It was some time before everybody knew what was going on.”

Monash Student Association president Rebecca Tomilson said the university was in the process of conducting a security audit and it appeared there was no evacuation procedure in place.

“When the first reports came out, and people were being evacuated, students were standing in huge groups as if it were a fire drill on the lawn. That concerned me. We’d heard the gunman was on the roof.”

Vice-chancellor Peter Darvall said while security would be reviewed, it was impractical to put a guard at every door.

Early today, police charged a 36-year-old man with two counts of murder and five counts of attempted murder. He was remanded to appear later today.