Furious mother vows never to return to Build-A-Bear after her autistic son, four, had meltdown in hours-long queue for cut-price teddy

A furious mother has vowed to never return to Build-A-Bear after she and her autistic son were allegedly told they would have to stay in the hours-long queue despite him having a ‘meltdown’ due to his condition.

Scenes of chaos erupted around the country yesterday amid fears of ‘riots’ as thousands of families queued during the stores’ ‘Pay Your Age Day’ promotion.

Francesca Ketley, 24, who lives near Bransholme, Hull, had queued with her fiancé Karl Rimmer, 35, to get bears for their children Isaac, four, and Alfie, one.

The family got to St Stephen’s Shopping Centre at 8.40am and entered the store just after 10am but the wait in the queue made Isaac agitated and restless. 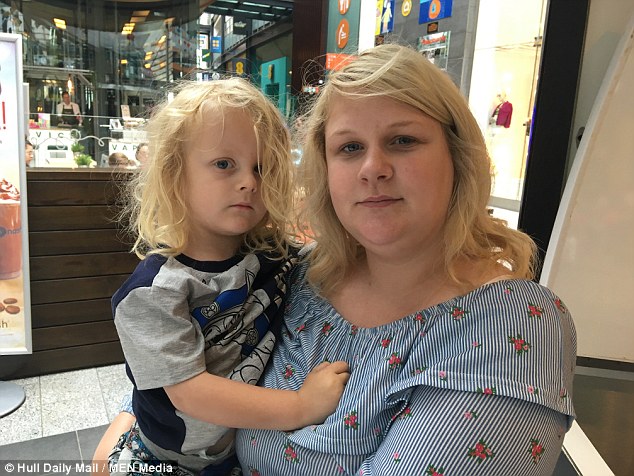 Francesca Ketley, 24, who lives near Bransholme, Hull, had queued with her fiancé Karl Rimmer, 35, to get bears for their children Isaac, four, and Alfie, one (pictured: Miss Ketley and Isaac) 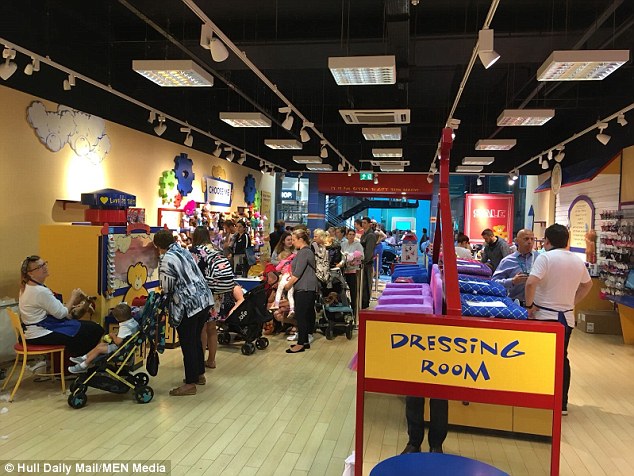 Miss Ketley said: ‘He is autistic and disabled and the security guard could see he was hand slapping and getting upset with himself.

‘The security guard and a Build-A-Bear member of staff came over and asked if he was OK.

‘I said he was getting upset and stressed so they let us come through to the till to speak to the manager to see if we could get a quick bear made.

‘One member of staff went to get the manager and offered us two pre-made bears which we were willing to pay for but then manager came back and said we would have to re-join the queue or he would give us this money off voucher.’

As queues got out of control at the shopping centre, teddy bear lovers were given the chance to take home a £12 off voucher which they could use in the future in store instead of queuing.

Miss Ketley, who had no choice but to take struggling Isaac out the queue, says she was offered two of these vouchers.

Nevertheless, she was not happy with the vouchers and felt she should have been able to take advantage of the ‘Pay Your Age Day’ offer, which saw the teddy bears – which can sell for up to £50 usually – priced for as little as £1. 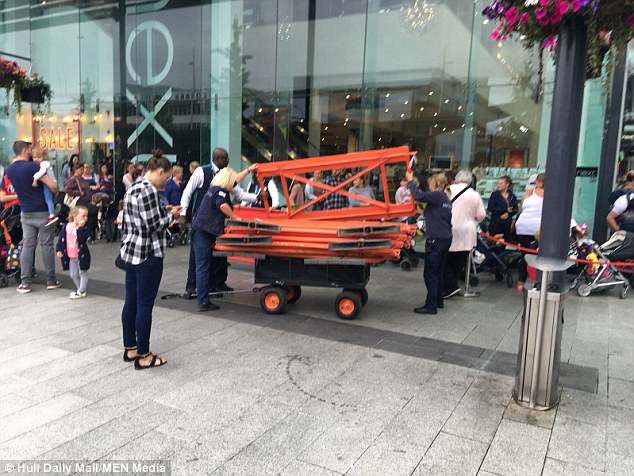 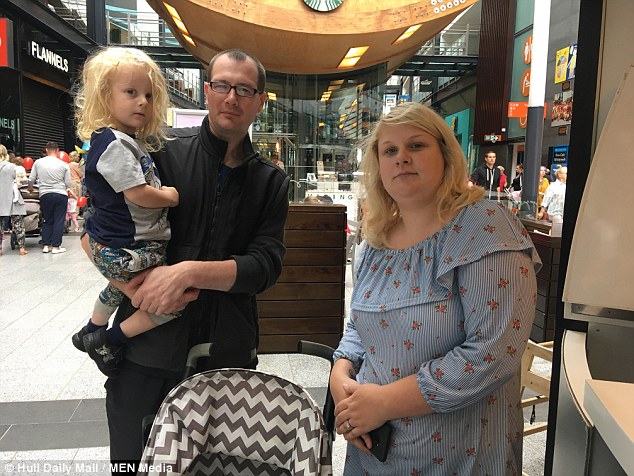 Pictured: (Francesca Ketley, 24, with her fiancé Karl Rimmer, 35, and their son Isaac, four)

‘The manager changed his mind and I told him I was disgusted,’ she said. ‘I couldn’t believe the way they treated a disabled child who was obviously very upset.

HOW DID THE PAY YOUR AGE DAY WORK?

On 12 July, customers were invited to ‘pay your age for any bear in the workshop’.

It was the store’s biggest in-store deal ever.

The offer was only available to Bonus Club members – which is free to join.

Bears were limited one per guest (or child).

Outfits and accessories for the toys were sold separately.

The minimum price was £1.

‘He has had a meltdown and he can’t understand why he couldn’t have a bear. It’s hard for him to register and I was disgusted with the whole service.

‘I’ve never experienced anything like this before from Build-A-Bear. Isaac just wanted to take part like every other child in the UK will have wanted to do.

‘Why should my son be treated any differently to the normal everyday child?’

Devastated by her bad experience, Miss Ketley took to Facebook to rant about how her family were allegedly treated.

On the Hull store’s Facebook page, she posted a one star review and wrote: ‘Disgusting service today I explain my four-year-old son was disabled [and couldn’t] cope with the queue and noise.

‘One lady was lovely but the manager didn’t care, wouldn’t even let me buy a pre-made one and fobbed me off with a voucher of money.

‘Disgusting you should of thought about disabled children – it’s not fair they should miss out.’ 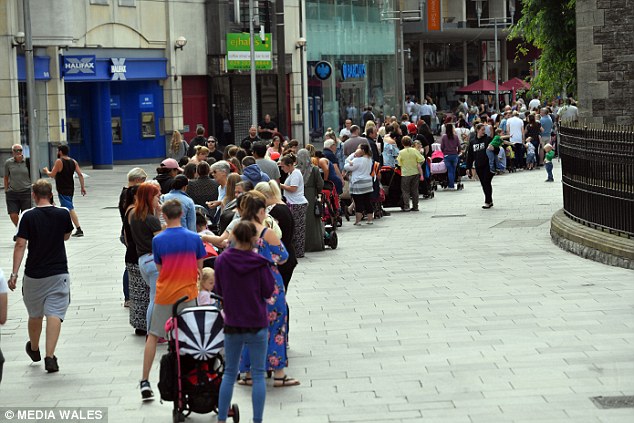 Scenes of chaos erupted around the country yesterday amid fears of ‘riots’ as thousands of families queued during the stores’ ‘Pay Your Age Day’ promotion (pictured: Cardiff store) 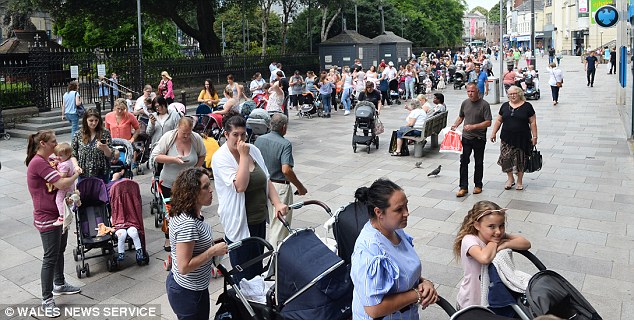 Miss Ketley has declared that she will never shop at Build-A-Bear again.

WHAT IS BUILD A BEAR AND WHO STARTED IT? 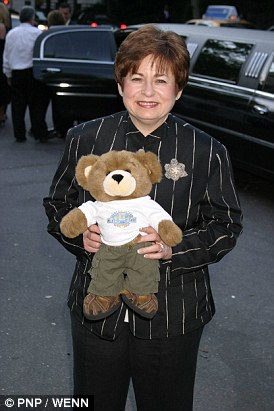 Maxine Clark, the founder of Build a Bear

Build-A-Bear is a plush toy retailer known for allowing customers to customise their teddy bear through an interactive process.

The company was founded on October 26, 1997 by Maxine Clark in St. Louis, Missouri and is currently headquartered in nearby Overland, Missouri. Ms Clark is a member of the Board of Directors of Footlocker, Inc. and Gymboree.

There are more than 400 Build-A-Bear Workshop stores worldwide.

Build-A-Bear is noted for charitable efforts, including raising money for the World Wildlife Fund.

The company is also notable for being the only major toy store in the United States to survive the ‘retail apocalypse’ after the closure of all Toys ‘R’ Us stores in June 2018.

She said: ‘I will never go back there again – not after being treated like that. I wasn’t asking for much – all I wanted was a pre-made bear. Isaac would have been happy with a simple teddy.’

Miss Ketley has since raised her concerns with Build-A-Bear – who have been contacted for a comment – and St Stephen’s Shopping Centre after Thursday morning’s incident.

Jim Harris, centre manager for St Stephen’s, said he was aware of Miss Ketley’s concerns but reiterated that security staff acted promptly and efficiently to try and resolve the situation in the best interests of the child.

He said: ‘Obviously it’s very difficult when you have got an autistic child in that kind of atmosphere.

‘As we understand it, the child was getting distressed and we were able to put the mother directly in contact with the manager of Build-A-Bear.

‘We don’t then know what they did or what they offered to the customer.’

The shopping centre had to deal with an unprecedented amount of people who flocked there to try and bag themselves a bargain teddy bear.

At its height, more than 500 people stood patiently waiting to get their hands on a cheap bear and at certain points during the day, security were forced to restrict people from entering the queue due to ‘safety concerns and extreme crowds.’

While stores in Telford, Shropshire, Basingstoke, Hampshire and Sheffield, were forced to close early and refused people entry amid ‘extreme crowds and safety concerns’.

During the day children were given a new stuffed toy simply by paying their current age in pounds – instead of the normal retail price, which starts at around £15.

All bears were included in the deal which led to a huge surge in demand.