Furious parents slam Bristol University after their ‘chronically shy’ daughter, 20, hanged herself on day she was told she had to do a presentation for up to 300 students despite suffering anxiety and panic attacks 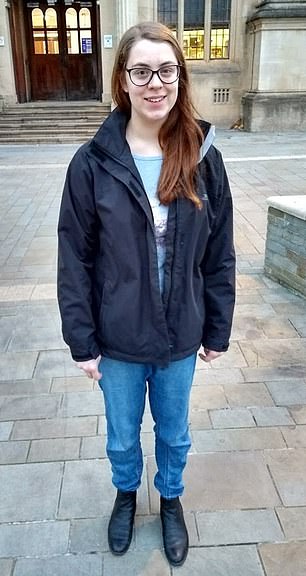 Natasha Abrahart, 20, killed herself on the same day she was due to give an oral presentation at the University of Bristol to up to 300 staff and students despite lecturers knowing she suffered from panic attacks around such tests

The parents of a ‘chronically shy’ student who suffered from anxiety and panic attacks have today slammed her university after it was revealed she killed herself on the day she was supposed to do a presentation to up to 300 staff and students.

Natasha Abrahart, 20, was found hanged in her flat in Bristol on April 30 last year on the same day she was due to undergo an oral assessment on her physics course.

The inquest heard staff at the University of Bristol had been aware of her panic attacks since late 2017 and could have made special allowances for her condition but didn’t.

Her parents Robert and Margaret blasted the university for docking her marks for previously missing oral assessments due to the panic attacks causing her to ‘face failing academically for the first time in her life’ and added she ‘came to Bristol seeking a bright future’ but instead they had ‘lost her forever’.

Miss Abrahart is one of 12 students to have died in Bristol in the past three years with nine recorded as suicides, including today’s case.

And the inquest also ruled she was ‘neglected’ by Avon and Wiltshire Mental Health Partnership (AWMHP) who ‘significantly underestimated her condition’ after she was referred to them by a GP in February 2018 following the first of a number of suicide attempts.

The trust admitted the neglect and has paid damages to her family.

Speaking after the inquest, her parents said: ‘Natasha’s social anxiety resulted in a six month struggle with oral assessments at the University of Bristol.

‘Her anxiety forced her to avoid most of these – for which the University docked her marks. As a result our bright, capable daughter faced failing academically for the first time in her life.

‘Our daughter came to Bristol seeking a better, brighter future. Instead, we lost her forever. We will never stop working to ensure that other students don’t endure the suffering she did.

‘We never want any other families to live with the pain we and our friends will face for the rest of our lives.’ 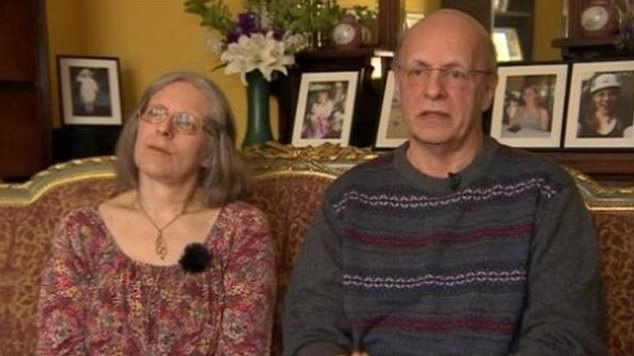 Her parents Robert and Margaret, pictured, slammed the university and said she had ‘gone to Bristol seeking a better, brighter future. Instead, we lost her forever’ 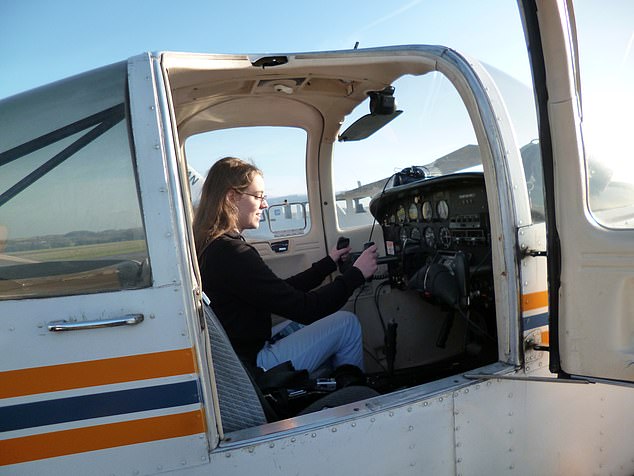 Gus Silverman, a public law and human rights lawyer at Irwin Mitchell, representing the family, added: ‘The University owed a duty of care to Natasha. It’s hard to understand how such a deeply vulnerable student received no direct contact from trained members of staff within the University’s Student Services, in which it has invested so much money in recent years.

‘An apparent lack of information sharing, coordination and compliance with the University’s own policies on supporting disabled students left Natasha exposed to stresses which could and have should have been removed.

‘At the same time we know that Natasha was being badly let down by specialist mental health services who failed to put in place a timely and adequate plan to mitigate Natasha’s risk of suicide.

‘At various points throughout the inquest process the University of Bristol has sought to dismiss concerns raised on behalf of Natasha’s family by arguing that it is “not subject to any statutory requirement to provide health services”.

‘The University objected to the family’s request for the inquest to sit with a jury and submitted that there was no ‘legal or factual basis for intensive scrutiny’ of its actions.

‘There is an unfortunate and uncomfortable contrast between the arguments advanced by the University in this case and its other public pronouncements about wanting to learn lessons from the alarmingly high number of deaths among its students.

‘It is to be hoped that the University will now reflect carefully on the meaningful changes it needs to make as a result of Natasha’s death.’

Dr Laurence Mynors-Wallis, a senior consultant psychiatrist, was instructed by the Senior Coroner for Avon, Maria Voisin, to review the treatment she received from the Avon and Wiltshire Partnership.

He found there was ‘an unacceptable delay’ in her having a specialist assessment following her referral to the Trust and that the student’s ‘risk of self-harm was not adequately assessed’. 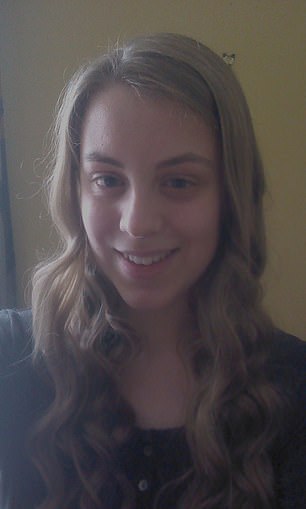 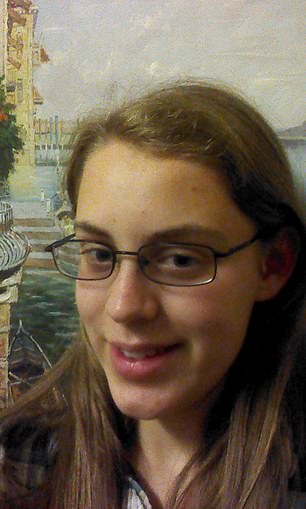 The inquest heard there was an ‘unacceptable delay’ between Miss Abrahart, pictured, being referred to the mental health service in February 2018, following suicide attempts, and an assessment being carried out

Dr Mynors-Wallis also found that a ‘failure to provide a timely and detailed management plan for Miss Abrahart represents a causal connection with her subsequent death.’

Coroner Maria Voisin recorded a narrative conclusion, finding that Natasha’s death was contributed to by gross failures by the Avon and Wiltshire Partnership.

The family’s solicitors at Irwin Mitchell confirmed that the Avon and Wiltshire Partnership has paid substantial undisclosed damages to the family but has yet to apologise for its admitted failings.

During the six day hearing at Avon Coroner’s Court, Dr Adrian Barnes, the Senior Tutor in the School of Physics, told the inquest that the department had identified ‘a need for pastoral support for Natasha’ in October 2017.

Internal emails between university staff read out to the inquest said lecturers were ‘unable to get Natasha to say anything at all’ in her first oral test despite her written work being of a ‘high standard’.

She was subsequently docked marks by Dr Chris Bell, senior lecturer in physics, for ‘failure to engage with oral assessments’.

But Dr Barnes told the inquest: ‘I never detected an unwillingness to do something.

‘I felt that there was someone there trying and wanting to do something but needing more support in working out how they would do that’. 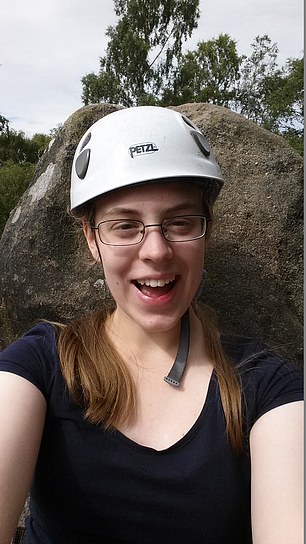 Miss Abrahart, pictured, was also described as ‘chronically shy’ by her parents

After a meeting with Miss Abrahart in February Dr Barnes told the court that he contacted the University’s Disability Service for advice on what ‘reasonable adjustments’ they could make to her course but accepted that he never heard back and didn’t chase up the email.

The court heard that the university was under a legal duty to make ‘reasonable adjustments’ to assessments to prevent disabled students from being placed at a ‘significant disadvantage’.

The court heard that on April 30 internal university emails said that that Miss Abrahart had missed three out of five oral assessment and that it was ‘going to be tight’ as to whether she passed the module.

Dr Barnes told the court that she would not have been able to continue on the course if she did not pass this module.

Barbara Perks, a student administration manager in the School of Physics, told the inquest she met with a friend of Miss Abrahart’s in February who said the student was depressed and had been self-harming.

Ms Perks told the Coroner that she contacted the University’s Student Wellbeing Service who sent her a list of online resources that the student could access.

Ms Perks added in the early hours of February 20, Miss Abrahart emailed her saying ‘I wanted to tell you that the past few days have been really hard, I’ve been having suicidal thoughts and to a certain degree attempted it.’

Later that day Ms Perks took her to a university GP who noted that she had made a suicide attempt with ‘definite intent’ was ‘in a state of acute distress’ and was ‘at high risk of ending her life’.

The doctor concluded that Miss Abrahart was suffering from ‘chronic social anxiety’ and had suicidal intentions and made an urgent referral for her to be seen by specialists at the Avon & Wiltshire Mental Health Partnership NHS Trust.

But the coroner heard there was no record of Ms Perks ever telling the student wellbeing service about the email.

During her evidence Ms Perks also said that it was ‘quite possible’ that she had told the Student Wellbeing Manager that Miss Abrahart did not want direct contact with specialist advisers, however the court was again told that there was no record of this.

After two suicide attempts in March, Miss Abrahart was was visited at home by a crisis team and one of the nurses told the Coroner she was at ‘significant risk’ and that he wrote to the University GP the next day stating ‘stress from university’ was ‘triggering self-harm’. 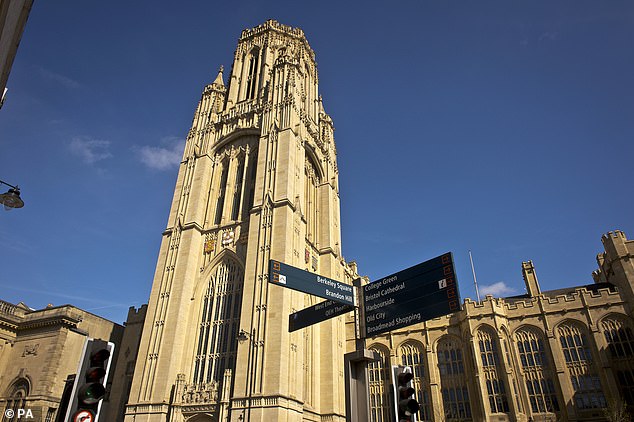 The inquest heard internal emails between staff at the University of Bristol, pictured, said Miss Abrahart was at risk of being kicked off her course if she did not give the presentation she was due to make on the day she died

Dr Mynors-Wallis told the court that Miss Abrahart’s social anxiety would have made oral assessments ‘significantly worse’ for her and that the planned assessment on 30 April would have been ‘particularly difficult’.

He concluded that ‘the stress of the university course was certainly a factor and among the stresses that Natasha was facing at the time she died’.

Delivering her narrative verdict, the coroner listed the following failings by the mental health partnership:

In correspondence with the family before the inquest the Avon and Wiltshire Partnership admitted there were ‘missed opportunities’ to put in place ‘an appropriate management plan’ and to ‘provide the deceased with an enhanced and more assertive level of care’.

A separate review carried out by the Trust’s Suicide Prevention Lead concluded: ‘Risk was clearly underestimated. It is important to clarify that what we would term ‘red flag’ suicide risk factors were all present and visible at the time, and have not been identified solely with the benefit of hindsight.

‘A more structured approach to risk management could and should have occurred earlier on.’