As Palestinians mark Nakba day, those wounded in last year’s ‘March of Return’ protests discuss how their lives changed. 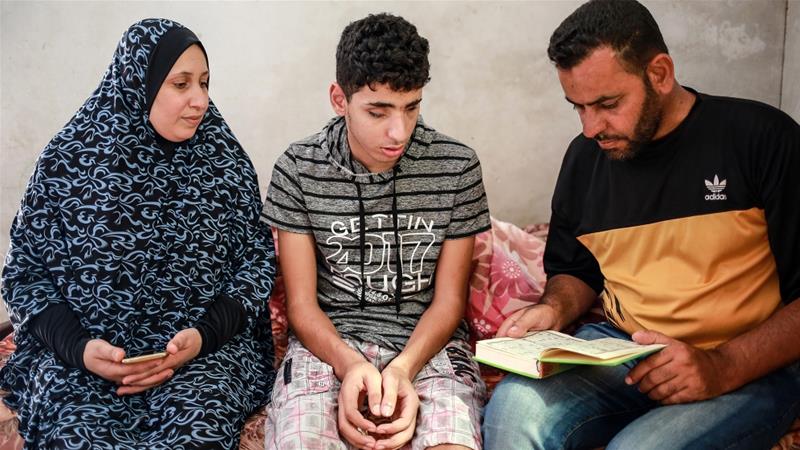 Gaza City – Saleh Ashour lay silently on his bed, as sunlight coming through the nearby window touched his permanently closed eyes. Three friends sat beside him, as well as his parents, who spend almost every waking moment with him.

“All what I want is to see again,” the 16-year-old said, wiping his eyelids with a tissue.

A year has passed since Salah lost his sight. On May 14 last year, he had made his way, along with tens of thousands of Palestinians, to the areas close to the Israeli fence to protest against the US decision to move its embassy from Tel Aviv to Jerusalem.

The demonstration, which was organised by the Great March of Return movement, also called for the right of return for Palestinian refugees, a day before the 70th anniversary of the Nakba, or catastrophe, which takes place on May 15 and marks the forced displacement of 750,000 Palestinians in 1948.

Over the course of the day, 62 protesters in the Gaza Strip were kiled, including six minors under the age of 18.

More than 2,700 others were wounded, including at least 1,204 from live ammunition, the Gaza ministry of health said. It marked the deadliest day since the protests were first launched on March 30 last year.

On that day, Saleh and his friend made their way to a protest congregation point east of al-Bureij. It was their first time attending the weekly rallies.

“I was about 150 metres away from the fence,” Saleh recalled. “I remember an Israeli drone came and hovered above us before dropping a barrage of tear gas canisters. All people in the area ran away, including my friend.”

At the same moment, Saleh was shot in the head with a bullet that entered behind his right ear and exited from his left eye.

“I didn’t realize what had happened,” he said. “My eyes were closed, but I thought it was because of the tear gas.”

Saleh lost consciousness. Meanwhile, his friend, who saw the blood pouring down Saleh’s face before he was taken away in an ambulance, thought he was killed.

“My relatives searched all hospitals and morgues from the southern Gaza Strip to the north,” Saleh’s father Usama said. “I even went near the fence area to search for him.”

The following day, a relative working in Gaza City’s al-Shifa Hospital called Usama to tell him a teenager that matched Saleh’s description was in the intensive care unit.

After spending three days there, Saleh started to talk and respond, but he still wasn’t aware that he had lost his sight. 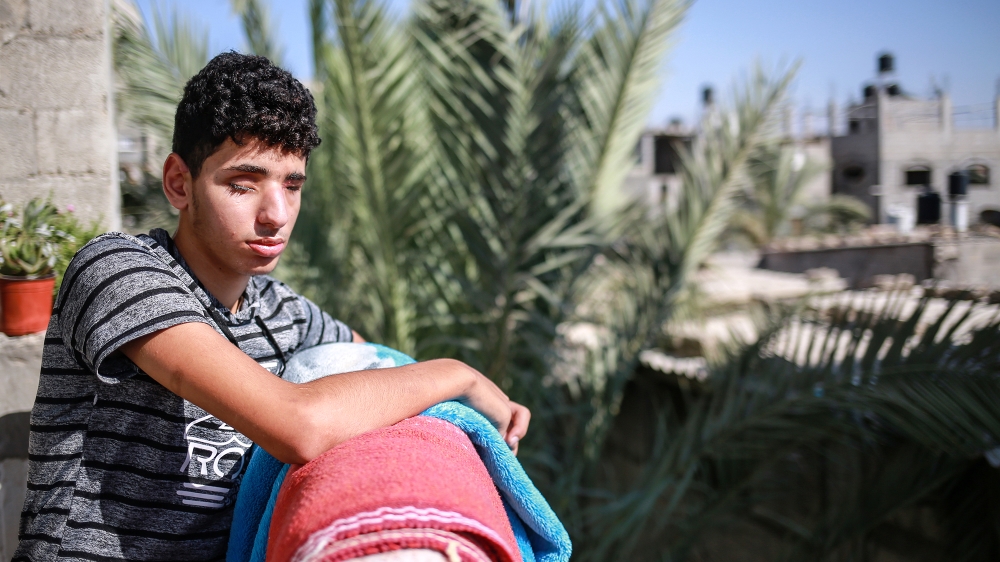 The doctors said that Saleh suffered a brain haemorrhage. A week later, he obtained a medical permit and travelled to the King Hussein Medical Centre in Jordan with his father.

Saleh underwent surgery to remove infections and shrapnel from his eyes, but the doctors were frank with Usama and told him there was no hope his son could ever see again.

With the help of the doctors in Jordan, Usama, who had until then hid the truth of Saleh’s medical condition from him so as to not affect his psychological state, gradually explained to his son that he had lost his eyesight.

“It was a great shock to me. I thought it was just a temporary state,” Saleh said weakly.

Saleh used to spend most of his time outdoors, but after his injury he has mostly confined himself at home.

“My friends come by every day and sometimes take me to the nearby mosque,” Saleh said. “They try to entertain me, yet I don’t feel happy. I see nothing.”

Abdullah Qasem, 17, remembered his eagerness to join the May 14 protest along with his friends and neighbours as “the entire Gaza Strip was preparing for that day.”

“I’m a refugee from al-Majdal [now called Ashkelon by Israel] and I wanted to call for our right of return,” he told Al Jazeera, sitting on his wheelchair.

He did not anticipate getting shot with a live bullet, which entered his right leg under his knee and penetrated to the other leg above his thigh.

“I was in unbearable pain,” Abdullah said. “I was in and out of consciousness. When I was awake, I was surrounded by chaos.”

“Hundreds of injured people were lying down in hospital corridors,” he explained. “Blood was everywhere, people were screaming and crying and doctors were struggling to deal with the huge number of casualties.”

The operation rooms were all busy. Abdullah and his family had to wait for 10 hours before he was finally examined by a doctor.

“I underwent seven surgeries in an attempt to connect veins and arteries but to no avail,” Abdullah said.

After 18 days, doctors told Abdullah both of his legs had to be amputated, otherwise his life would be endangered due to the poisoning caused by the bullet. 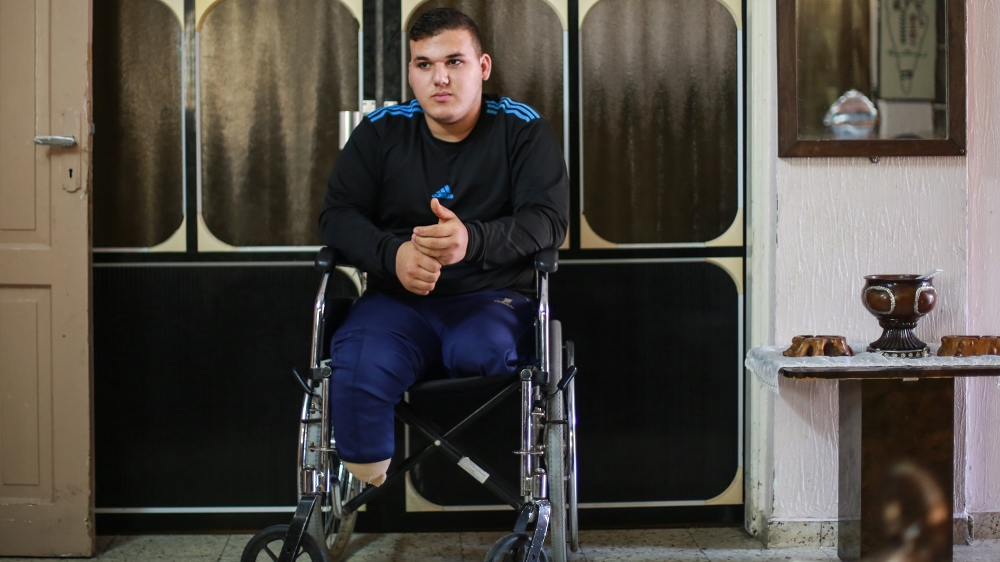 “I had no choice. I had to surrender to my fate,” Abdullah said with a strangled voice while looking at his amputated legs.

After his legs were amputated, Abdullah teetered between life and death as inflammation coursed through his body, putting his kidneys at risk of failure.

“Now here I am today,” he said. “At first I needed help with everything I do. Now I can manage going to school alone, changing my clothes, and climbing up and down the stairs.”

“I don’t regret participating in the protest,” he insisted. “I paid a high price, but everyone here is used to sacrifices.”

Abdullah was due to have a follow up appointment in a prosthetics centre supervised by the Red Cross, where he would be fitted with two prosthetic legs after a long time waiting.

“I’m excited for my new artificial limbs, as I’ll be standing up again,” he said. “What a coincidence I’ll have them on the same date I lost my legs a year ago.”

The sole breadwinner no more

Dawlat Fawzi Hamadeen, 33, was a hairdresser and owned her own salon in Beit Hanoun, in the northern Gaza Strip.

On May 14 last year, as she joined the throngs protesting near the Israeli fence, an explosive bullet penetrated the main artery in her thigh, and she was immediately evacuated to hospital.

“It was the hardest year in life,” Dawlat told Al Jazeera. “Doctors told my family I was on the verge of death.”

She underwent a seven-hour surgery, the first of many to follow in the ensuing year. After her application for a medical permit to seek treatment in either Jerusalem or Jordan was rejected by the Israeli military, Dawlat later travelled to Egypt with her father. 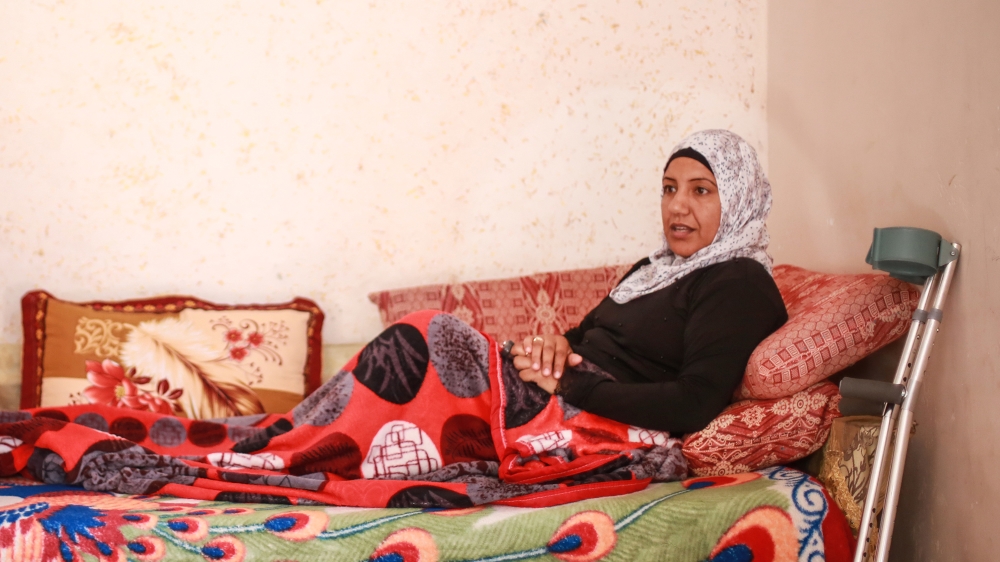 Dawlat spent six months in Egypt, where she underwent seven surgeries, and returned to the Gaza Strip in April.

Yet her injury has prevented her from opening up her salon again, a difficult situation to be in as she was the sole breadwinner for her family.

“I miss my working life,” she said. “My family’s living conditions sharply deteriorated during this year with no alternative source of income for them. I want to go back to my work, but my condition doesn’t allow me.”

Yet she said doesn’t regret participating in the protest.

“It is my destiny. The march could achieve many of its demands such as ending the Israeli blockade on Gaza, but it needs to be sustained over a long period of time.”