When the Cats take on the Tigers in the grand final on Saturday, Geelong's hometown fans can take advantage of gathering in growing numbers in pubs and bars.

On Sunday, Premier Daniel Andrews announced regional hospitality venues could expand their service to seated patrons, allowing a maximum of 40 people indoors and 70 people outside, subject to density limits.

Not so for inner-city Richmond where Melbourne rules apply, limiting restaurants, pubs and bars to takeaway only. 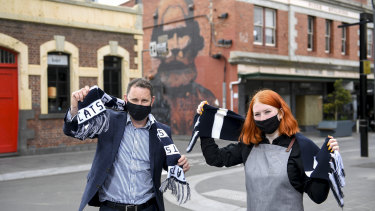 Geelong Chamber of Commerce chief executive Ben Flynn and Madison Clohesy, Restaurant Manager of The Arborist in Geelong have welcomed news that hospitality venues can serve more patrons both inside and outdoors.Credit:Penny Stephens

The average number of cases in regional Victoria over 14 days was 0.5 on Sunday with no additional infections recorded in Shepparton where the total remains at three.

When the Cats last won a grand final in 2011 the streets of Geelong were abuzz with revelry as fans crammed into busy nightspots and spilled out onto the street.

The celebrations will likely be far more subdued this weekend should Geelong claim their tenth premiership.

But Geelong’s business community is hoping the grand final will still inject a much-needed boost into the economy of Victoria’s second-largest city.

Geelong Chamber of Commerce chief executive Ben Flynn, who had called on the state government to ease indoor dining restrictions, said there was a greater sense of hope with the Cats in the grand final and more people allowed to go out for meals and drinks. 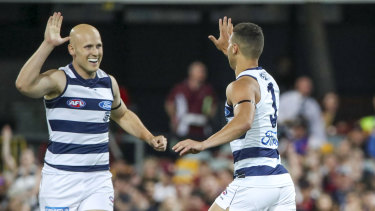 Geelong’s business community hopes that the Grand Final will provide a shot in the arm for the local economy. Credit:Glenn Hunt

“We really welcome those changes. For a lot of venues and people that will still be restrictive. But I do encourage everyone in Geelong to get out and support those venues that have been doing it really tough,” he said.

Mr Flynn described the atmosphere as “absolutely joyful” when the Cats won the flag in 2011.

“It was really terrific. We hope that despite the restrictions we can still feel some sense of that this week.”

Madison Clohesy, restaurant manager of Geelong venue The Arborist, said business had already begun picking up after the previous round of restrictions were eased, allowing venues to serve a maximum of 20 people indoors and 50 outside.

The mood had lifted noticeably in Geelong, she said, after the Cats thumped Collingwood in their semi-final earlier this month.

“Even in the past two weeks with Geelong winning some great games we’ve seen such an increase in support and people wanting to get out and celebrate,” Ms Clohesy said.

But no big backyard grand final barbecues will be allowed.

“I know people want that, but it is not safe and it will do nothing but set us back and make it harder for us to take these next steps,” he said.

However, the new rules now permit households to host visits from two other adults and their dependents, including children if they cannot be left unattended at home.

On Sunday, Mr Andrews also announced indoor pools in regional Victoria would reopen to people older than 18 with a maximum of 20 users.

Religious gatherings can also be expanded to 20 people outdoors plus one faith leader near a place of worship.

But as Mr Andrews and Chief Health Officer Brett Sutton were speaking to the media on Sunday, word filtered through about another positive case in Kilmore.

The Kilmore and District Hospital confirmed a staff member at Kemp's Bakery in Kilmore had tested positive, forcing the closure of the business's bakeries in Kilmore and Wandong for cleaning.

Professor Sutton said he was surprised at the new case after authorities “looked extremely hard” at recent cases connected to the Oddfellows cafe in Kilmore.

abuzz, final, Geelong, grand, With
You may also like:

Cary Grant got hooked on LSD and was bisexual

Parents of mummy blogger, 29, who died with three children speak out