Officers suspended after participating in far-right groups, including one which shared image of refugee in gas chamber. 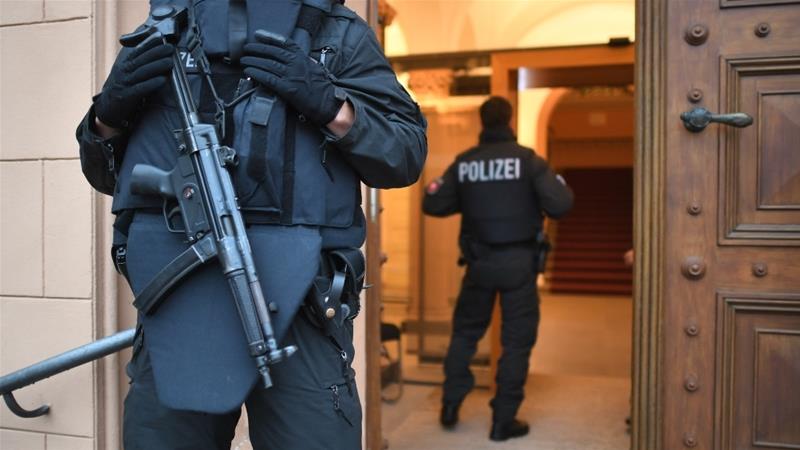 Five far-right chat groups have been discovered among members of police forces in western Germany, in what a the local government has called a “disgrace”.

Some 126 pictures were shared in the groups, including images of Adolf Hitler and a doctored image of a refugee in a gas chamber.

Twenty-nine police officers took part in the chats, all of whom have been suspended, Herbert Reul, interior minister in the state of North Rhine-Westphalia, told reporters in Dusseldorf on Wednesday.

They are all facing disciplinary measures, he added. Fourteen of them are set to lose their jobs.

Reul addressed reporters after raids were conducted against 14 police officers at 34 police departments and private properties in the cities of Duisburg, Essen, Moers, Muelheim and Oberhausen.

The state minister described the scandal as a “disgrace for the police”.

Police believe one of the groups was founded as early as 2013.

This is not the first case to raise concerns in Germany of far-right attitudes among police.

In the central state of Hesse, investigators looking into a hate mail campaign against politicians and public figures stumbled upon a chat group used to exchange “extremist” content.

A similar group was also discovered in the southern state of Bavaria last year, in which hate speech targeting Muslims was shared.

In Baden-Wuerttemberg in the southwest, it emerged that seven police cadets were being investigated for exchanging right-wing “extremist” content in a private WhatsApp group.

In response to the latest case in North Rhine-Westphalia, Reul announced that a special inquiry would be initiated for the police department of Essen, where 25 of the suspended officers work.

A special commissioner for rooting out far-right elements in the state police will also be hired.

found, German, police, ra, sharing
You may also like: