New York: A US appeals court on Monday rejected Ghislaine Maxwell's effort to block the release of an April 2016 deposition concerning her relationship with the late financier and registered sex offender Jeffrey Epstein.

The order by the 2nd US Circuit Court of Appeals in Manhattan is a defeat for the British socialite, who said releasing the deposition could undermine her ability to defend herself against criminal charges she enabled Epstein's sexual abuse of girls. 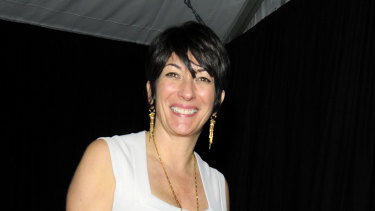 Ghislaine Maxwell has lost her bid to keep her 2016 deposition suppressed. Credit:Getty Images

In its unsigned order, the appeals court said US District Judge Loretta Preska in Manhattan correctly concluded that there was a presumption the public had a right to access Maxwell's deposition.

It also said Judge Preska did not abuse her discretion in rejecting Maxwell's "meritless arguments" that her interests superseded that presumption.

Lawyers for Maxwell did not immediately respond to requests for comment.

Maxwell, 58, has pleaded not guilty to charges she helped Epstein recruit and groom underage girls as young as 14 years old to engage in illegal sexual acts in the mid-1990s, and not guilty to perjury for having denied involvement under oath.

The British socialite has said bad publicity from disclosing "intimate, sensitive, and personal" details from the deposition would violate her right against self-incrimination, and imperil a fair trial because prospective jurors may hold it against her.

Her 418-page deposition came from a long-settled defamation lawsuit by Brisbane-based Epstein victim Virginia Giuffre, who has said the financier kept her as a "sex slave" with Maxwell's help.

Judge Preska ordered the deposition unsealed in July, saying Maxwell did not overcome the presumption the public had a right to see it.

Maxwell's lawyer Adam Mueller, however, said the deposition was filled with suggestive questions akin to "when did you stop beating your wife," and that Maxwell's denials to certain questions could be as "revealing" as her admissions.

"It certainly implies that the other side has an evidentiary basis to ask the question," he said.

David Boies, a lawyer for Giuffre, countered that there was a "substantial presumption" of public access, but drew scepticism from the panel about why his client deserved it.

"What does she care about it?" Circuit Judge Rosemary Pooler asked. "Sure she wants the whole thing out, but what's the legally cognisable interest?"

Boies responded it was important that materials be unsealed in an "even-handed way," to ensure that no context is lost.

Christine Walz, a lawyer for the Miami Herald, which also wants the deposition unsealed, told the appeals court that Maxwell's "mere speculation" about how an unsealing would affect her criminal trial was no justification to block it.

Maxwell was arrested on July 2 in New Hampshire, where prosecutors said she had been hiding out.

She has been locked up in a Brooklyn jail after US District Judge Alison Nathan, who oversees the criminal case, called her an unacceptable flight risk.

Epstein, a registered sex offender, killed himself at age 66 in August 2019 at a Manhattan jail while awaiting trial on sex trafficking charges.

The most important news, analysis and insights delivered to your inbox at the start and end of each day. Sign up to The Sydney Morning Herald’s newsletter here, to The Age’s newsletter here and Brisbane Times‘ here.

COVID-19 vaccines rescued by boat amid severe flooding in Kentucky

Fury as Seresto flea collars linked to nearly 1,700 deaths of cats and dogs EPA docs show yet NO warning has been issued – The Sun