Giuliani, who has joined Trump’s legal team in recent weeks, made the statement during an interview with Sean Hannity on the Fox News Channel late Wednesday.

The statement contradicts Trump’s denial last month that he had any knowledge of Cohen’s initial payment to Daniels.

‘Having something having to do with paying some Stormy Daniels woman $130,000 – I mean which going to turn out to be perfectly legal,’ Giuliani said.

‘That money was not campaign money, sorry.

‘They funneled through the law firm and the president repaid it.’ 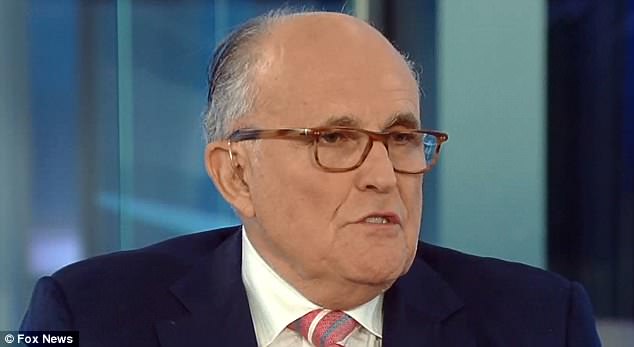 Daniels’ attorney, Michael Avenatti, said Giuliani’s comments were a ‘stunning revelation’ and that Trump ‘evidently participated in a felony.’

Avenatti told MSNBC on Wednesday that Trump may be guilty of money laundering, campaign finance violations, and fraud by paying Cohen back in small increments over the course of several months, as Giuliani said he did.

‘It’s a violation of federal law. It’s a criminal act to do that.’

As other US news outlets led with Giuliani’s comments, Fox News instead focused on Giuliani calling for James Comey, the fired FBI director, to be prosecuted.

After the interview with Hannity, Giuliani was asked by The Wall Street Journal if his comments on Fox put the president in legal jeopardy.

‘No cam­paign fi­nance vi­o­la­tions, no crime of any kind. Michael had discre­tion to solve these.’

Cohen faces a criminal probe into his business affairs by federal prosecutors in Manhattan, including over the $130,000 payment, which he has called legal.

The payment was made to Daniels, an adult film actress who was paid to never speak about an alleged affair with Trump.

Daniels has since sued Trump and Cohen claiming that the non-disclosure agreement she signed was invalid.

Trump recently claimed that he had no knowledge of the $130,000 payment to Daniels.

He has claimed that Cohen made the payment on his own without his knowledge.

Giuliani told Hannity that the $130,000 payment was ‘a very regular thing for lawyers to do.’ 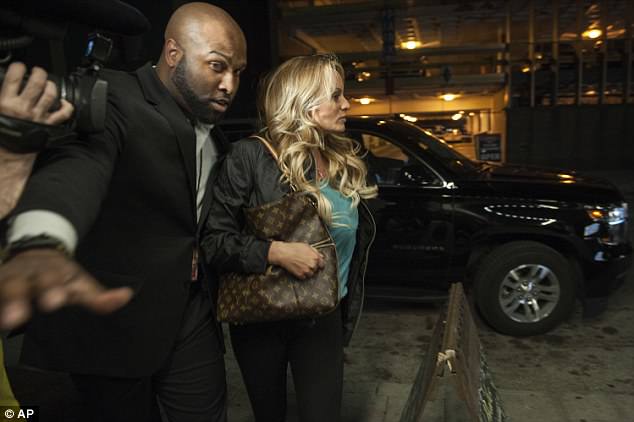 The statement by Giuliani contradicts Trump’s denial last month that he had any knowledge of Cohen’s initial payment to Daniels. Daniels is seen above in downtown Pittsburgh late Wednesday being escorted to a club by a bodyguard 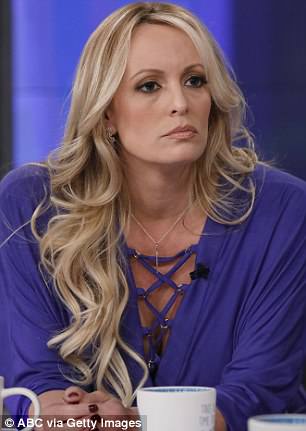 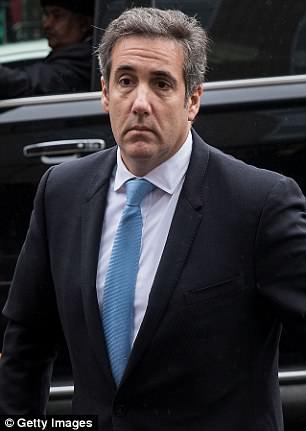 Giuliani told Hannity that the $130,000 payment was ‘a very regular thing for lawyers to do.’ Daniels is seen left and Cohen is seen right

Giuliani continued: ‘Everybody was nervous about this from the very beginning. I wasn’t…

‘When I heard Cohen’s retainer of $35,000, when he was doing no work for the president, I said, “That’s how he’s repaying it, with a little profit and a little margin for paying taxes, for Michael”.’

Giuliani said that the president ‘didn’t know about the specifics of it (the $130,000 payment to Stormy Daniels), as far as I know.

‘But he did know about the general arrangement that Michael would take care of things like this.’ 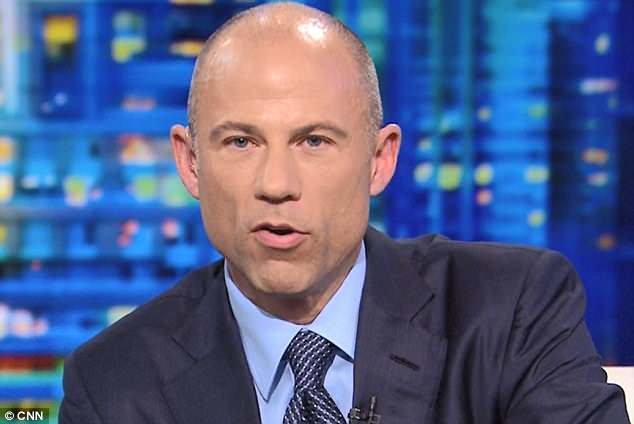 Daniels’ attorney, Michael Avenatti (seen above on CNN on Wednesday), said Giuliani’s comments were a ‘stunning revelation’ and that Trump ‘evidently participated in a felony’

Daniels claims she had sex with Trump in 2006, months after his third wife gave birth to his youngest child.

Trump has denied having sex with Daniels. 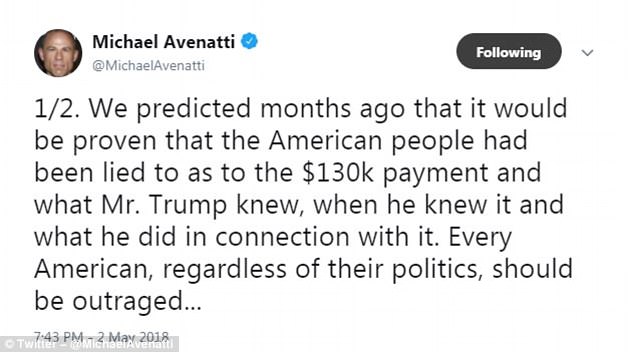 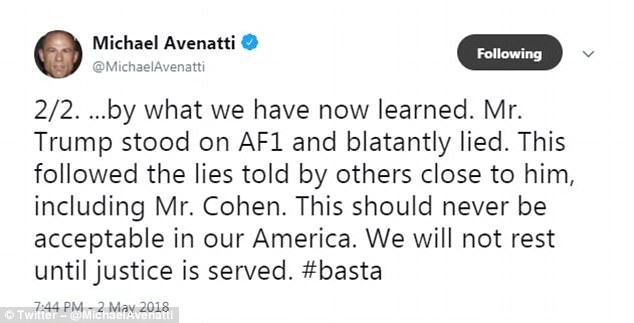 ‘Mr. Trump evidently has participated in a felony and there must be serious consequences for his conduct and his lies and deception to the American people,’ he said.

‘I am absolutely speechless at this revelation… This is an outrage what has gone on here. The American people have been lied to about this agreement.’

Appearing on CNN later in the evening on Wednesday, Avenatti said: ‘I said it weeks ago. I’m going to say it again. Mr. Trump will not serve his term. No way, no how. He will be forced to ultimately resign.’

Avenatti tweeted late Wednesday: ‘We predicted months ago that it would be proven that the American people had been lied to as to the $130k payment and what Mr. Trump knew, when he knew it and what he did in connection with it.

DID TRUMP BREAK THE LAW BY RE-PAYING COHEN IN INCREMENTS?

Title 31 of US Code 5313 requires that any cash transactions exceeding $10,000 be reported to the federal government by way of a Currency Transaction Report.

This is done in order to combat money laundering and other financial crimes.

The act of breaking up large transactions into smaller ones just to avoid filing a CTR – which is known as ‘structuring’ – is illegal.

CTRs are given to the IRS so that the identities of the individuals making the transactions are known.

The maximum penalty for ‘structuring’ is five years in prison and a fine of $250,000.

Dennis Hastert, the longest-serving Republican House speaker in history, pleaded guilty in 2015 to structuring, which is a form of money laundering that involves withdrawing a large sum of money in small increments to avoid detection.

The lawmaker was taking the money out of his bank accounts to pay a promised $3.5million in compensation for pain and suffering to one of his five sexual abuse victims of wrestlers he coached, he admitted in his plea agreement and at his sentencing hearing.

‘Every American, regardless of their politics, should be outraged by what we have now learned.

‘This followed the lies told by others close to him, including Mr. Cohen.

‘This should never be acceptable in our America. We will not rest until justice is served.’ 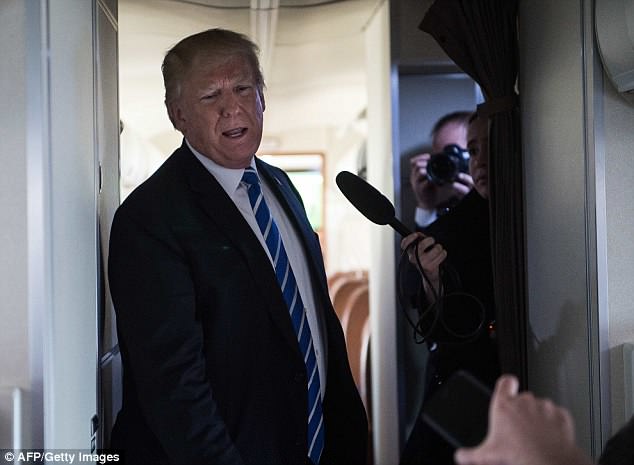 Last month on Air Force One, Trump said he didn’t know about the $130,000 payment his personal attorney made to Daniels, issuing a firm denial in his first public comments about the adult-film actress who alleges she had an affair with him

After Giuliani’s interview with Hannity, Laura Ingraham, who hosts the 10pm show, said: ‘They better have an explanation for that. That’s a problem.’

Strangely enough, Trump did not tweet about the revelations by Giuliani.

Instead, the president tweeted about a book written by a co-host of Fox & Friends.

He also tweeted about trade talks with China.

Giuliani later told The Washington Post that he spoke with Trump late Wednesday and that the president approved of his interview.

Giuliani said Trump was ‘very pleased’ and that he knew he was going to raise the matter of the reimbursement.

‘He was well-aware that at some point when I saw the opportunity, I was going to get this over with.’

When Giuliani was asked by the Post if he thought Trump would fire him, he laughed.

Last month on Air Force One, Trump said he didn’t know about the $130,000 payment his personal attorney made to Daniels, issuing a firm denial in his first public comments about the adult-film actress who alleges she had an affair with him.

Trump also said he didn’t know why his longtime lawyer had made the payment.

Strangely enough, Trump did not tweet about the revelations by Giuliani. Instead, the president tweeted about a book written by a co-host of Fox & Friends

He also tweeted about trade talks with China

Asked why Cohen wrote the six-figure check, Trump said: ‘You’ll have to ask Michael Cohen. Michael is my attorney.’

But the president ignored a question about whether he had set up a fund for Cohen to draw on for such purposes.

Cohen has said that he took out a home equity line of credit to withdraw the money, and that he never told then-candidate Trump about it.

Daniels on Monday sued Trump for defamation, saying he lied by tweeting that her claim of being threatened if she discussed an alleged sexual encounter with him was a ‘total con job.’ 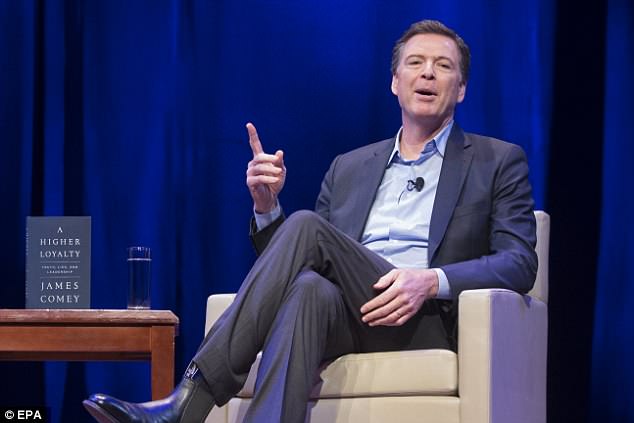 Giuliani said the Mueller probe should be shut down ‘in the interest of justice.’

‘There’s been too much government misconduct,’ the former New York mayor said.

‘The crimes now have all been committed by the government and their agents.’

Comey gave memos of his conversations with Trump to members of his legal team as well as other associates, who then revealed their contents to the press.

Comey has said the materials were not classified and that he broke no laws.

‘I have never, ever… leaked a damn thing [when I was a federal prosecutor],’ said Giuliani.

‘I would have considered resigning if I ever did that.’

Giuliani said that Trump fired Comey last year because the then-FBI director refused to say that the president was not being investigated.

‘Comey would not, among other things, say that [Trump] wasn’t a target of the [Russia] investigation,’ Giuliani said.

‘He’s entitled to that. Hillary Clinton got that [during the email investigation.] And he couldn’t get that.’

Giuliani was apparently referring to Comey’s decision not to recommend charges in the investigation into Clinton’s use of a private email server when she was secretary of state.

‘You can’t blame the president for feeling, “I am not being treated the same way [Clinton was]”,’ Giuliani said.