Follow
Home » World News » Goal! Football fan gets a huge cheer as he fits through the turnstile

Goal! Football fan gets a huge cheer as he fits through the turnstile

Goal! Football fan gets a huge cheer as he fits through the turnstile at ground after losing six stone because he was too FAT the year before

Cheering football fans have captured the heart-warming moment their friend managed to make it through the turnstiles at a match – having been too large to do so the year before.

Tim Hickman was determined to lose weight after he was forced to use the gates to get into a football game between his beloved Darlington FC and Stockport County in January last year.

The 23-year-old set himself the challenge of losing enough weight to get through the turnstiles for the next clash between the teams – which took place on Saturday. 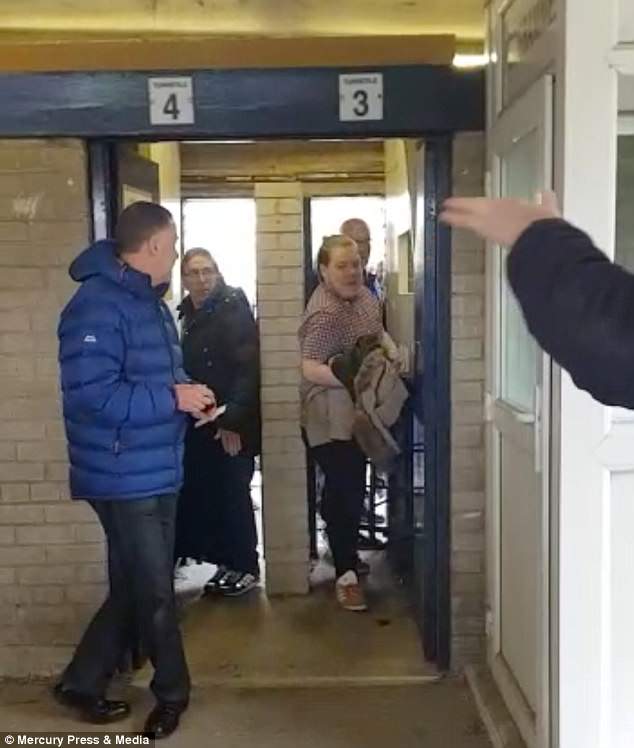 Delighted: Determined Tim making his way through the turnstiles on his way to watch his beloved Darlington FC play on Saturday

Having feared he was going to die because of his size, Tim, who is 5ft 7in tall, managed to shift more than six stone in 10 months – dropping from 23st 8lb to 17st 3lb.

In footage taken by friend Charlotte Parker at the game at Edgely Park, Stockport, on Saturday Tim can be seen coming through the turnstiles while his pals build the tension before erupting into cheers when he makes it through.

The elated crowd then started jumping up and down while a beaming Tim joins in with singing ‘he used to be obese but he’s just fat now’. 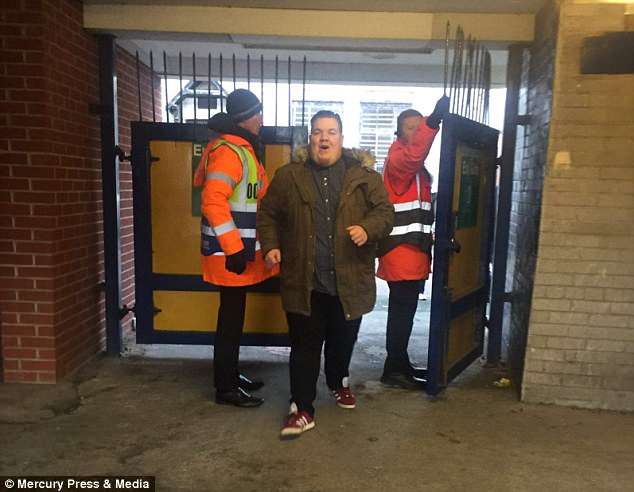 Tim of Darlington, Co Durham, said: ‘It was in January last year that I first went to that ground.

‘It had happened at other grounds when I’d got stuck in the turnstiles so when I saw them I thought ‘there’s no way I can fit through there’ and asked if I could use the gate instead.

‘It’s embarrassing having to go through a big gate like that and having to ask them to open it. You laugh it off but it’s a bit tragic really.

‘My friends took a picture of me coming through the gate and it was seeing that that made me think “I’ve got to do something about this”. 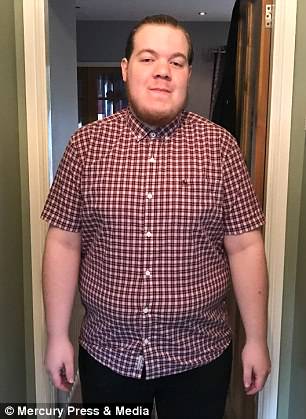 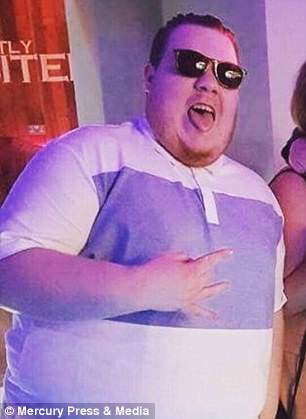 ‘At one point I was getting chest pains. I woke up in the middle of the night with pains and really feared I was going to die. I’d never had that before.

‘It took a few months for me to start trying to lose weight. I was looking at the football fixtures and saw we were playing Stockport again in April.

‘It was spur of the moment but I thought “let’s do something”. That became my aim – to be able to get through the turnstile. I wanted to give it a go.’ 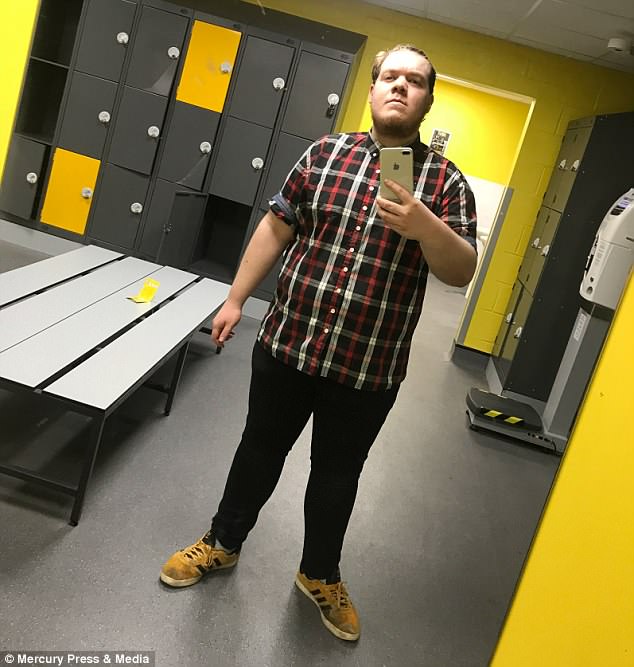 The shop assistant, pictured at the gym recently, explained that he was afraid of dying: ‘I’d just been getting bigger and bigger. I’ve always been a big lad but it got to the point where I was just getting bigger and I was thinking “how long am I going to live?”‘ 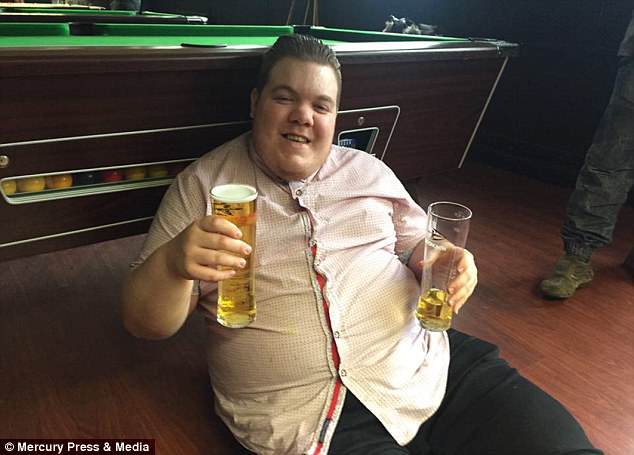 Tim, photographed before he lost weight, explains that he used to eat incredibly badly: ‘I think I was eating about 4,000 calories a day. It was disgusting to be honest’

The shop assistant said at his heaviest he was 23st 8lb due to eating “crap” including two or three takeaways a week and snacking on big bags of crisps and chocolate bars.

Tim explained: ‘I could not walk more than 300 yards without my legs killing me. I think it would annoy my friends because I’d have to stop all the time.

‘Every night after I finished work at about 8pm I would go home with big chocolate bags, sharer bags of crisps and a two-litre bottle of fizzy drinks.

‘I think I was eating about 4,000 calories a day. It was disgusting to be honest.

What did Tim eat before, and how does he eat now?

LUNCH: A sandwich or a couple of shop-bought pies and a packet of crisps

DINNER: Takeaway pizza or a microwave meal, a big bar of chocolate, a sharing bag of crisps and a two litre bottle of fizzy drink

SNACK: Apples, a cereal bar and a diet fizzy drink

‘I had tried diets in the past but couldn’t stick to them for more than a couple of weeks.’

The die-hard Darlington FC fan said this time he started his weight-loss regime with a shake diet but quickly abandoned that after realising it wasn’t sustainable.

Tim said: ‘I just started eating healthier and a few weeks later I joined a gym.

‘I was making sure I had breakfast, eating three meals a day and cutting down on snacks.

‘Rather than having a takeaway I now whack some chicken on the George Foreman grill.

‘In the first week I lost nine pounds and within three weeks I’d lost a stone.

‘I’m going to the gym at least three times a week and usually do 50 minutes to an hour of cardio.

‘My next goal is to have lost 100lb then I will aim for another.

‘I think getting to around 14 and a half stone would be great. I don’t actually know what I’d look like at that weight.

‘I’m setting myself small targets. I would say to other people just to keep it simple. We’re not athletes – just do it at your own pace.

‘I still allow myself a treat meal at the weekend.

‘I feel much more confident now. I’m getting out and walking to the football ground rather than taking the bus.’

Tim said that his friends were rooting for him to get through the turnstile on Saturday.

Tim said: ‘They have all supported me which has motivated me to keep going. It’s nice when people who you don’t know very well comment on it too.

‘The intention was to replicate the picture from last year of me coming through the turnstile then they told me they were going to film it instead. I thought it would be a bit of a laugh. 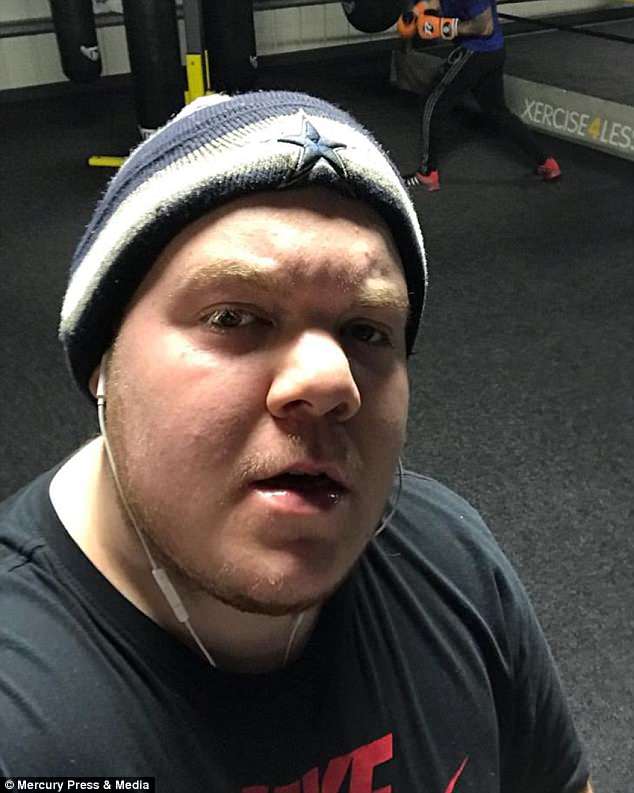 ‘I was nervous when I got there. I was thinking ‘please don’t let me get stuck’. It would have been so embarrassing.

‘They were all stood there going “woah” so I played up to it a bit. I got half way through it and I was certain I was going to do it.

‘Coming through it was brilliant. It made me think the past 10 months have been worth it.’

Tim’s friend Charlotte, 21, who has known him for seven years and filmed him coming through the turnstile said it is great to see her friend so happy.

Charlotte said: ‘Quite a few times he would have to come through the gate instead of the turnstile and he would laugh it off but I think that picture last year was what kicked it off.

‘We were all so happy to see him do it – we knew he would and then he couldn’t stop smiling for the rest of the game.’