Decision by agency under President Duterte against journalist-run site is seen as attack on press freedom, democracy.

The Philippine government has sought to shut down an independent news website, which has published critical stories about President Rodrigo Duterte, a move observers and journalists say is an attack on press freedom and democracy.

The Philippine Securities and Exchange Commission (SEC) announced on Monday that it has revoked the registration of Rappler, citing violations of foreign ownership and control of the Manila-based news organisation.

The SEC, an agency under the president, is responsible for enforcing securities and investment laws in the country, as well as maintaining company registry.

It is the first time the SEC has invoked the closure of a Philippine media company.

The agency said Rappler used a “deceptive scheme” in running the company, and decided to revoke a 2015 legal document that allows foreign investment.

The so-called “depositary receipt”, which allows investors to hold “unissued shares”, is also being used by other Philippine media companies to attract investments.

In the case of Rappler, the document allowed the Omidyar Network to invest in it.

The company was set up by eBay founder and billionaire Pierre Omidyar, who also has an interest in the news site, The Intercept.

In a news conference streamed online, Maria Ressa, CEO of Rappler, decried the “very political nature” of the decision.

She said “due process” was not followed, and that Rappler was not given a chance to respond to the findings of the investigation.

“This is the last part of the kind of harassment journalists have had in the last year or so,” she said.

“What we will do is prepare to fight. We stand tall, we stand firm. This is a moment that we will say that we stand for press freedom,” Ressa, a former CNN foreign correspondent, added.

She also said that journalists, not investors, have full editorial and management control of her news site. 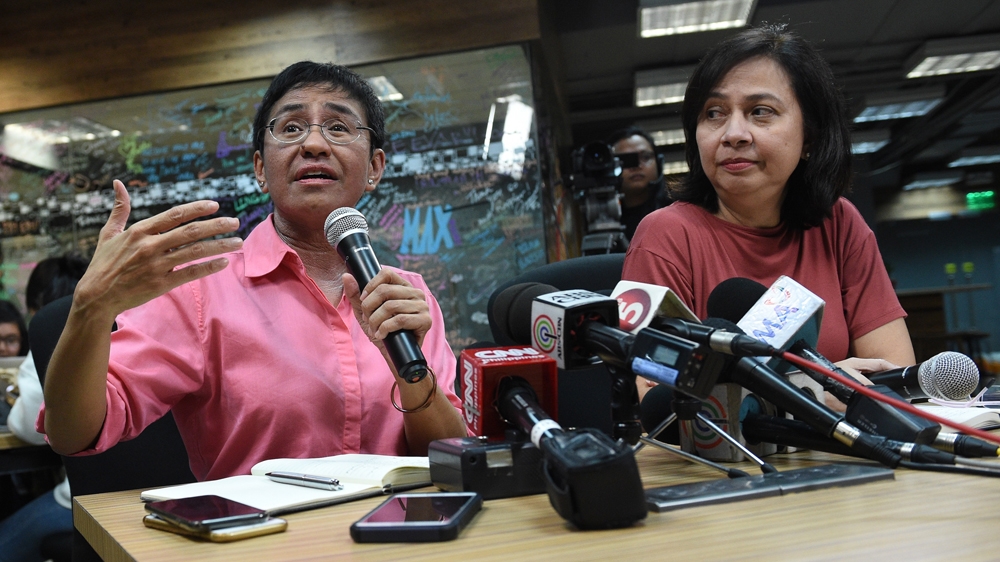 Chay Hofilena is head of Rappler’s investigative desk and is responsible for news operation.

She said the company is willing to question the decision “all the way to the Supreme Court”.

The order to shut down Rappler comes months after Duterte declared, before a joint session of the Philippine Congress, that he wants the ownership of Rappler investigated.

Among other investigations, Rappler had been responsible for a story on the citizenship of Duterte’s first foreign affairs secretary. That led to the resignation of Duterte’s top diplomat.

The news website, which launched in 2012, had also published a series of reports putting into question the Duterte administration’s deadly war on drugs.

Since Duterte became president, many of his social media supporters attacked Rappler as “fake news” and threatened violence against its journalists, including Ressa.

Other media organisations also drew the ire of Duterte, including the largest newspaper, Philippine Daily Inquirer, and the largest television network, ABS-CBN.

Owners of the Philippine Daily Inquirer were later forced to sell ownership of the company to an ally and political financier of Duterte, billionaire businessman Ramon Ang.

Duterte has also continued to threaten ABS-CBN, vowing to block the renewal of its franchise. In December, he said he would be willing to forgive the news channel if it supports his administration’s push for constitutional change and shift to a federal form of government.

In a statement on Monday, the National Union of Journalists of the Philippines (NUJP) expressed “outrage” over the government’s decision against Rappler.

“We call on all Filipino journalists to unite and resist every and all attempts to silence us,” NUJP said, adding that it declares its “full support” to media outfits the state “has threatened and may threaten to shut down”.

The Foreign Correspondents Association of the Philippines has also denounced the government’s decision, saying it is “tantamount to killing the online news site.

“The decision … sends a chilling effect to media organisations in the country,” it said.

Three of the four members who participated in the SEC decision were appointed by Duterte’s predecessor, Benigno Aquino. Only one is a Duterte appointee.

“The moves by the Philippines authorities to shut down Rappler is an alarming attempt to silence independent journalism,” said Amnesty International’s director of Southeast Asia and the Pacific.

“This is a politically motivated decision, pure and simple, and just the latest attempt to go after anyone who dares to criticise the government.

“Rappler has been fearless in holding those in power to account, including by consistently criticising the government’s murderous ‘war on drugs’. It has faced persistent harassment by government supporters and even the president himself.”

In a press conference, Duterte spokesman Harry Roque denied the decision was an attack on press freedom, saying the issue is about “the compliance of 100 percent Filipino ownership and management of mass media”.

Ana Santos, a Manila-based journalist whose work has been published on Rappler, however, said the decision shows a “2018 version” of martial law, which was declared by Ferdinand Marcos, former president, in 1972.

“Perhaps having learned from the playbook of old dictators, President Duterte is resorting to other means to clamp down on press freedom,” she told Al Jazeera.

“What the administration didn’t quite figure out is that Rappler is a purely online news outlet. You can’t shut down the internet.”

Human Rights Watch joined calls for the agency to reverse its decision, saying: “If Duterte succeeds in silencing Rappler, it will have a profound chilling effect on Philippine media freedom, encouraging self-censorship by reporters and media outlets fearful of government reprisals for critical reporting at a time when the watchdog role of a free press is more urgently needed than ever.”