Grandfather trips up and disarms man who was fleeing from police

This is the moment a hero grandfather trips up an armed man, allowing police officers to capture him after a chase.

The grandfather, named locally as Bill, was waiting outside a library in Columbus, Ohio with his graddaughter when he heard police sirens and saw a man running.

Bill waited for the suspect, thought to be 18 years old, to draw closer before sticking out a leg to trip him up.

The grandfather said he saw the man running from police officers with his hand in his waistband.

Bill, who has a walking stick, said he thought the suspect had a lead on the officers and so decided to help them out.

He stuck a leg behind him as the suspect passed by, sending him sprawling and causing the man to drop his gun – likely saving his life, according to police. 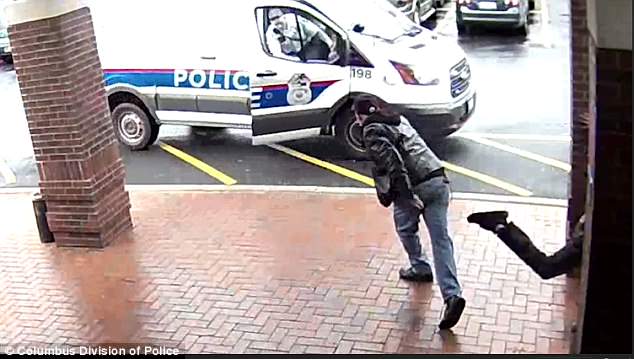 The grandfather saw the man coming and stuck out a leg, sending the armed suspect sprawling

The grandfather can then be seen dashing out of the way as armed officers descend on the suspect.

Bill said that he saw a gun clattering away as the man fell to the ground.

He said: ‘He went one way and the gun went the other way. I could see him trying to pick it up so I got out of the way.’

Officers then arrest the man, with one saying: ‘You’re lucky you dropped that gun man.

‘Boy you almost got shot.’ 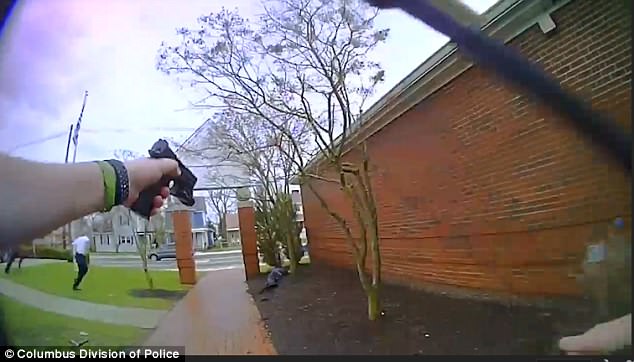 Police officers quickly rushed to catch up with the man, with one saying that they ‘almost shot’ the 18-year-old

Police later said that Bill likely saved the suspect’s life by disarming him and allowing officers to catch up to him.

They recovered a Glock 9mm pistol with a magazine containing 29 rounds from the suspect.

The man was arrested and taken to the Franklin County Jail. 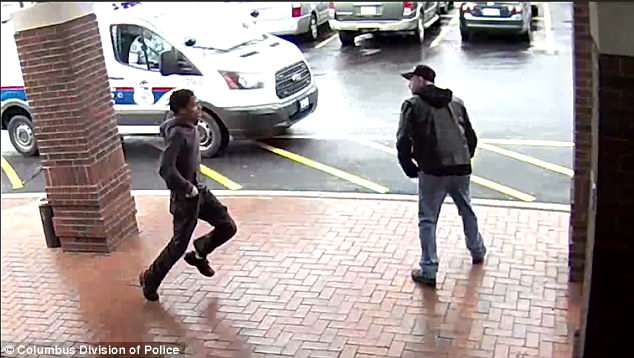 The grandfather, called Bill, said he heard sirens and saw that the suspect was ahead of officers so decided to help out

Columbus police said: ‘Community involvement, be it by courage, bravery and/or fancy footwork, helped take a criminal off the streets of Columbus.’

The officers seemed delighted with Bill’s actions, with one saying he could see the grandfather planning his intervention moments before the trip.

An official can later be seen shaking Bill’s hand and thanking him for his bravery.

He said: ‘We have no idea if that might have turned out differently if you hadn’t done what you did. I cannot thank you enough sir. You are an outstanding community member.’