Convenience food! Enormous great white shark feasts on carcass of 28-foot whale in front of surprised anglers off the coast of California

A full-grown great white shark estimated at 17 feet long was spotted less than a mile from a Southern California pier on Thursday, feasting on the body of a dead whale.

The shark was caught on camera enjoying its meal offshore from the San Clemente pier by Marc Levine, owner of AllWater Charter, after he first saw the whale carcass at around 10am Pacific, and then returned to the scene.

The dead whale is believed to have been a juvenile, measuring about 28 feet long.

Levine was out on the water that day on a 23-foot fishing boat, on a privately chartered fishing expedition out of Dana Point.

After seeing the whale’s body floating, he continued on with his group of anglers.

A fishing boat nearby had already seen the shark by that time, and when another one of Levine’s charters that had hung around the whale reported it had returned, he quickly made his way back to see the large creature for himself.

‘It was surreal when I got the first shot of him, or her. It kind of didn’t hit me,’ Levine  said.

‘I kind of blacked out. It was just, an animal that size is not something you see, ever.’ 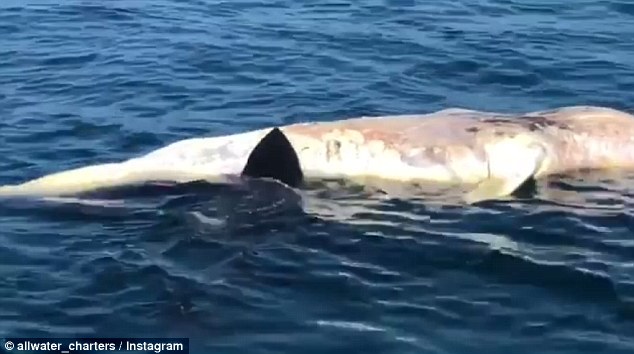 A 17-foot-long great white shark was seen taking a bloody bite out of a dead whale, floating less than one mile from the San Clemente pier in Southern California on Thursday

The longest great white sharks might reach up to 20 feet long, but that’s not the norm, according to the Smithsonian Institution’s Ocean department.

Ryan Lawler, owner of Newport Coastal Adventure, told the Register he believed the dead whale was a juvenile, and estimated it to be about 28 feet long.

‘The shark was not that much smaller than the whale,’ he said, having made the trip from Newport Harbor to see it for himself, in person, on Thursday.

‘It was pretty awesome. I had never seen a shark that big before.’

Lawler’s company captured aerial footage of the massive fish, showing it swimming between boats and circling around the area where the dead whale was floating. 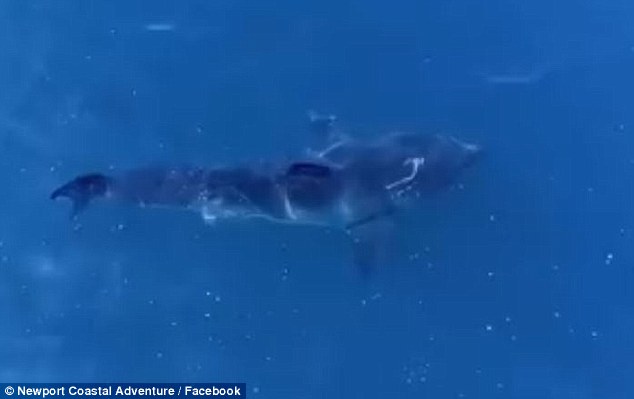 ‘The shark was not that much smaller than the whale,’ Ryan Lawyer, owner of Newport Coastal Adventures said, after having made the trip from Newport Harbor to see it for himself 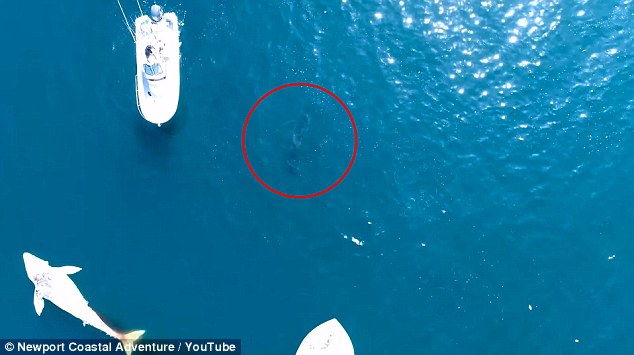 Lawler’s company, Newport Coastal Adventures, captured aerial footage of the shark swimming between boats and circling around the area where the dead whale was floating

Ralph Collier, founder of the Shark Research Committee, told the Register that it’s not that uncommon for such a large shark to be so close to shore.

‘I’ve seen 17-foot white sharks on the other side of surf breaks,’ he said.

While San Clemente Marine Safety Officer Ian Burton noted that there are always safety concerns associated with a shark being near shore, Collier said the shark will most likely not be concerned with humans, thanks to its full belly.

‘They can always leave the whale satiated and full and they’ll just cruise around and they might cruise by the shoreline. Or they will go to deeper water and that will be that,’ he said.

‘Their attention is going to be on the whale. They are worried about that.’ 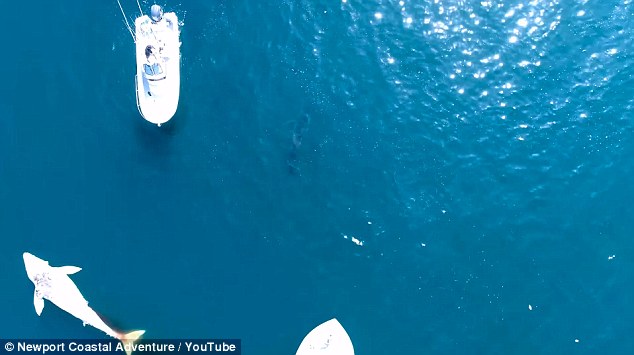 Ralph Collier, founder of the Shark Research Committee, told the Register that it’s not that uncommon for such a large shark to be so close to shore

113 patients with Covid moved from hospitals to Scots care homes