Has the Canberra disease spread to Malaysian politics?

Almost from the moment Mahathir Mohamad claimed an extraordinary election win in May 2018, delivering the country's first change of government 61 years after Malaysia's independence, speculation has swirled about when – or if – he would follow through on his promise to hand the prime ministership to Anwar Ibrahim.

In the lead up to the poll, the plan was for Mahathir to hand over to Anwar after two years.

Soon enough, though, the May 2020 handover date started to slip. 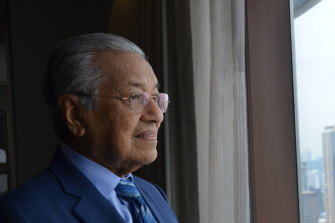 For months, there have been reports the governing Pakatan Harapan coalition of parties – which holds 139 seats out of 222 in the Parliament and includes Anwar's PKR (50 seats), Mahathir's Bersatu (26 seats), the DAP (42 seats) and others – was about to disintegrate.

Anwar has been at loggerheads with his PKR deputy Azmin Ali – who some claim is favoured by Mahathir to be the next prime minister, and who has been meeting with opposition MPs from the former ruling party UMNO, too. This has prompted suggestions of a new governing coalition comprising Mahathir's Bersatu party, Azmin's loyalist MPs in PKR and other opposition parties, including former governing party UMNO – the party Mahathir led during his first 21-year stint as prime minister. 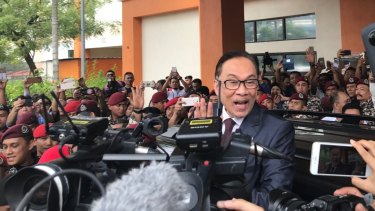 Malaysian prime minister-in-waiting Anwar Ibrahim spent years in prison following two sodomy convictions he has always denied. He was granted an official pardon and released on May 16, 2018.Credit:James Massola

On Sunday, the leadership drama looked set to come to a head.

MPs from the would-be new government – a combination of the current government and opposition – were gathering in party headquarters and hotels across the city before converging on the Sheraton Hotel in Kuala Lumpur.

At one point, local media reported the leaders of the six parties that would form a new government were at the monarch's residence, the Istana Negara, to talk to the King, that Mahathir was on his way there and that a press conference would follow afterwards.

An adviser quickly told the Prime Ministerial Whatsapp channel for journalists that Mahathir was at home, had not gone to the Istana to see the King, and would not be holding a press conference. That stopped speculation that a new government was about to be formed on Sunday night, but this issue is far from resolved. 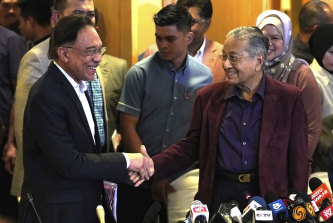 Anwar Ibrahim and Mahathir Mohamad in Putrajaya, Malaysia on Saturday. Anwar said he wants Mahathir to be given space to run the country “without pressure”.Credit:AP

But there's more to it than that.

Anwar has been on a promise to be the prime minister of Malaysia for more than two decades; he was denied the job in 1998 when he was the Deputy Prime Minister to Mahathir after the pair fell out. After two stints in jail, Anwar clawed his way back through hard scrabble years of opposition politics to the point where he was again the next in line after Mahathir.

His opponents have always questioned his suitability for the job and now, as in 1998, they have worked assiduously to stop his ascent. Anwar and his supporters have not assisted by attempting to box the leader in to setting a date. 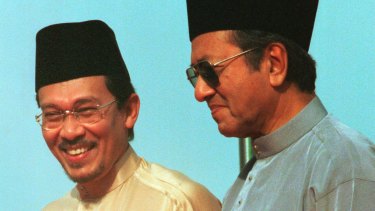 Mahathir has always insisted he will hand over power to Anwar – he said as much in an interview with The Sydney Morning Herald and The Age in November – but he has never committed to a date. Even so, a hand over after an APEC meeting in Kuala Lumpur in November had been pencilled in.

Setting a date would make Mahathir a lame duck and anger some of his own supporters, who would prefer Azmin (or just about anyone else) to be the next prime minister.

For Mahathir to go back on his word now would be an extraordinary betrayal of Anwar, and a stain on the Prime Minister's legacy that would not be erased – and that's something he will be keenly aware of.

However, if a new coalition of parties came together to form a majority, forced Anwar and the PKR into opposition and insisted that Mahathir remain as prime minister – well, that's different, isn't it?

The reality is that neither Mahathir nor Anwar could have secured victory in May 2018 without the other, but such facts seem to have been forgotten and the hope of a "new Malaysia" seem to be fading as the rivalry between the two men and their supporters plays out once more.

On late Sunday evening, UMNO opposition leaders were claiming the Pakatan Harapan coalition government was finished, that Azmin and his supporters (perhaps 10 of PKR's 50 MPs) would quit the governing coalition and that perhaps Mahathir's Bersatu MPs would do so, too.

Anwar decried the betrayal of his former allies and conceded that a new government could be formed as soon as Monday.

Now, all eyes are on Mahathir to see which way he jumps: to keep the Pakatan Harapan coalition in place, or to form a new coalition with himself as leader?

The two decades-long drama at the heart of Malaysian politics is reaching boiling point – again.

Much like Australians who have been horrified by the constant leadership changes and instability in Canberra, Malaysians are entitled to ask whether their political leaders are more interested in themselves or in the national interest.

Canberra, disease, has, sprea, the
You may also like: