They have worked tirelessly on the health front line, shouldering extra stress and putting their own safety at risk.

Yet these Covid-19 heroes have still found time to litter pick in between their draining shifts.

Clinical nurse Simon Green and care worker Rachel Andrew are backing the Mail’s Great British September Clean – and insist that if they can get involved, anybody can. 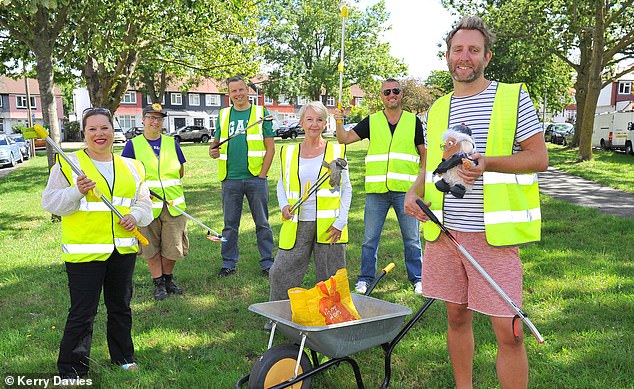 Commitment: Clinical nurse Simon Green, right, with his local litter picking group. Mr Green, from Surbiton, south-west London, told the Daily Mail he feels it is his civic duty to pick up litter on his weekends

Mr Green was redeployed to a Covid-19 ward at the start of the pandemic.

He has worked in the NHS for 20 years but cannot remember a time as stressful or as daunting as this crisis.

Despite his long and gruelling shifts, Mr Green, 40, still finds the energy to help out with the local litter picking group he set up two years ago.

Mr Green, from Surbiton, south-west London, told the Daily Mail he feels it is his civic duty to pick up litter on his weekends. 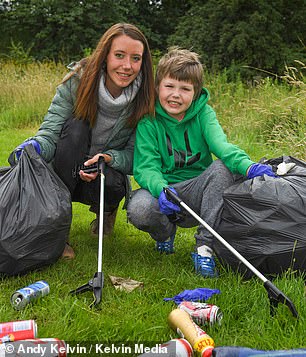 Care worker Rachel Andrew, 31, has also been shocked by litter louts in recent weeks, so she decided to take her son Dylan, eight, out litter picking

‘You know that old saying, if you want something done, give it to a busy person,’ he said.

‘That’s very true, I think, because I’m just the kind of person who likes to get things done. I spend all day in a very sterile environment where I go to great lengths to keep things clean and tidy, I just got sick of walking out of the hospital and seeing so much mess. More than anything I just find it really embarrassing to see my borough in such a state – after all that’s where I live.’

A keen litter picker, he first started organising clean-ups two years ago and now commits to at least one a month.

Up to 20 eco-conscious residents join him, under the group name ‘#2minutelitterpickhook’.

Mr Green added: ‘During lockdown, everything was so nice and tidy and you got a real sense of how things could be if people were just a little more conscientious. But unfortunately we have seen that completely reverted and it’s very disheartening to see.’

Care worker Rachel Andrew, 31, has also been shocked by litter louts in recent weeks, so she decided to take her son Dylan, eight, out litter picking.

Now the mother and son duo, from New Mills, Derbyshire, have made it their ambition to clean-up the Peak District.

Mrs Andrew, who has worked in the care sector for seven years, said: ‘We started going out around a month ago because Dylan wanted to earn his green Blue Peter badge. And we’ve been out every single day since now, covering beauty spots all around the Peak District.

‘We can’t believe the mess that has been left by people recently, I don’t know what has got into everyone. But it’s been very good for Dylan, he’s so much more aware of the environment and his surroundings now. Anytime we go out, Dylan will spot some litter and will say “quick mummy, I’ll just go get the grabber from the boot!”’

She added: ‘I think carers and nurses are naturally the kind of people who want to go out litter picking and do things for their local community as we’re very conscientious and empathetic. It’s what we do: we care.’

carers, Coronavirus, fro, hero, on
You may also like: