HMS Hermes, Britain's flagship during the Falklands, is sold for scrap

The world’s oldest-serving aircraft carrier which once sailed as Britain’s flagship during the Falklands War is set to be turned into motorcycles after it was finally sold for scrap in India.

The HMS Hermes entered active service in the Royal Navy in 1959, was due to be decommissioned in 1981, but was saved from the scrapheap to lead British forces to victory in the Falklands in 1982.

She was then sold to India in 1986, renamed the INS Viraat, and remained in service until 2017, when she was officially decommissioned in Mumbai – 36 years after she was initially due to be scrapped.

Now, having sat idle in Mumbai for three years, she has be sold for £5.1million as scrap to the Shree Ram Group at Asia’s largest ship scrapyard in Alang, Gujarat state, who say she will likely be turned into motorcycles. 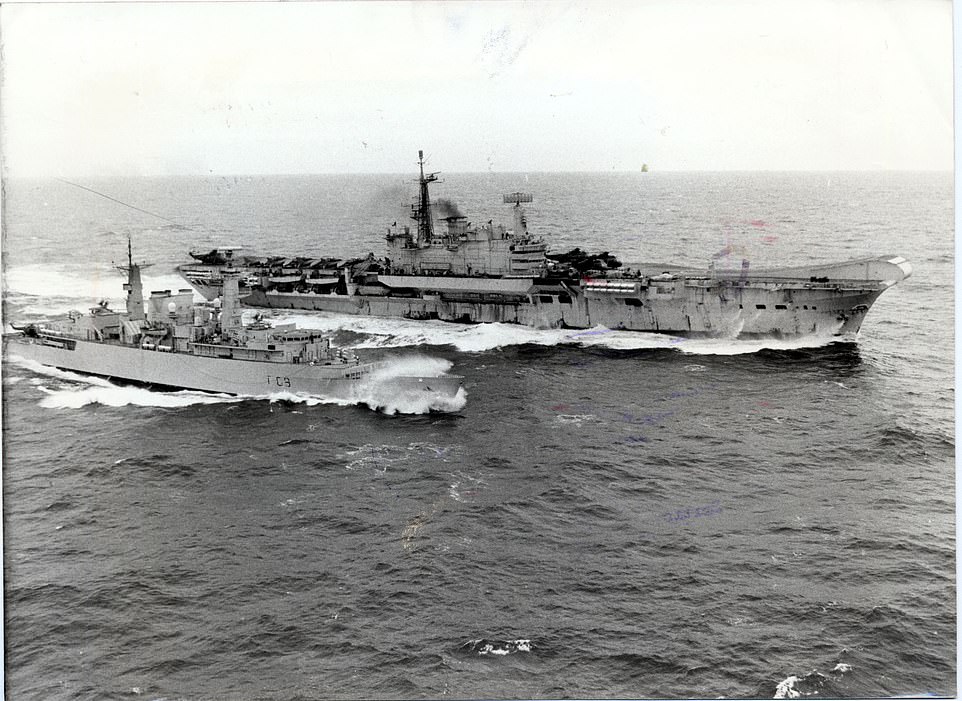 The HMS Hermes, Britain’s flagship during the Falklands War (pictured sailing to the south Atlantic in 1982), will likely be turned into motorcycles after being sold off for scrap by the Indian navy – which bought her after the conflict 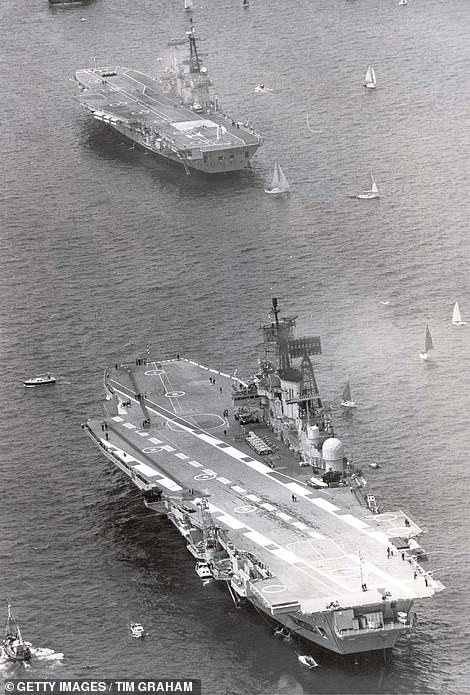 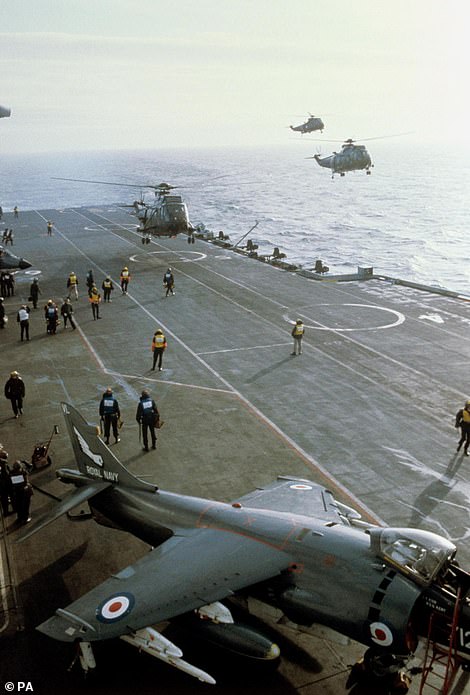 The Hermes (pictured left during the Queen’s silver Jubilee celebrations in 1977) had long been considered surplus by the Royal Navy and was very nearly scrapped in 1981, but was saved from the heap after Argentina attacked the Falkland Islands in 1982 – with the Hermes named flagship of the Royal Navy force sent to recapture the territory 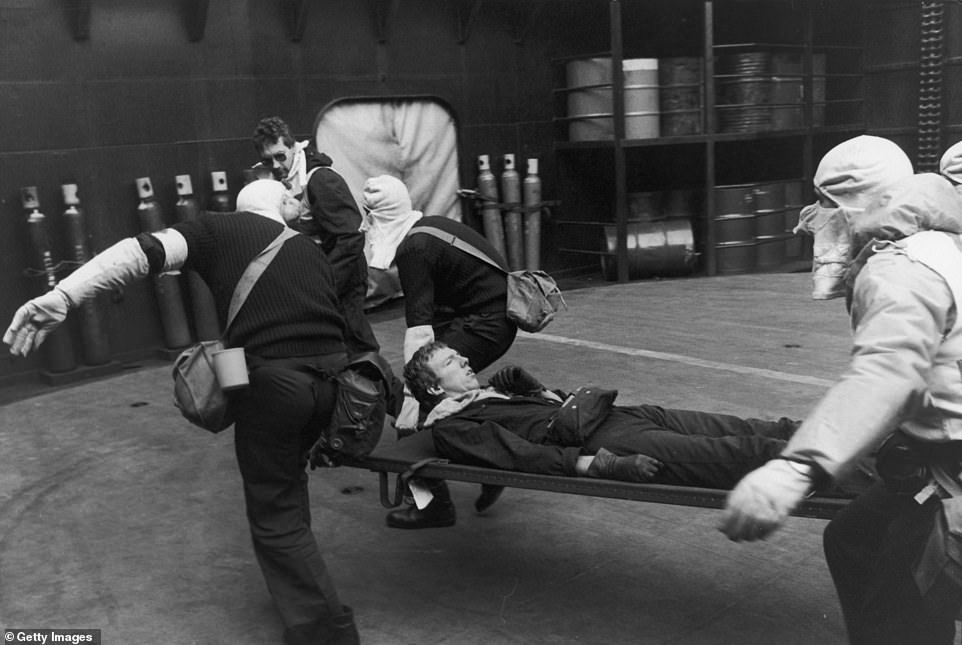 The Hermes, known as the Grand Old Lady of the Royal Navy, was considered too valuable to risk in close-quarters operations against the Argentines, and so was used as a support vessel – including taking on wounded from the frontlines (pictured) 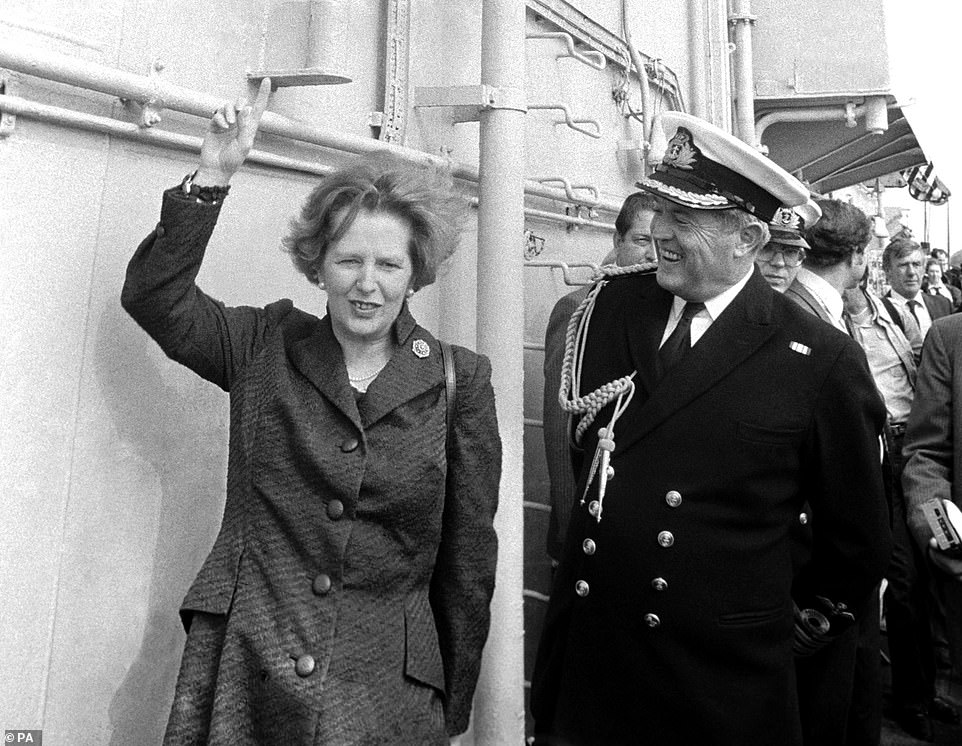 After the war was won, the Hermes was welcomed back to Portsmouth as a hero, with Margaret Thatcher taking a tour of her alongside Captain Linley Middleton (pictured) 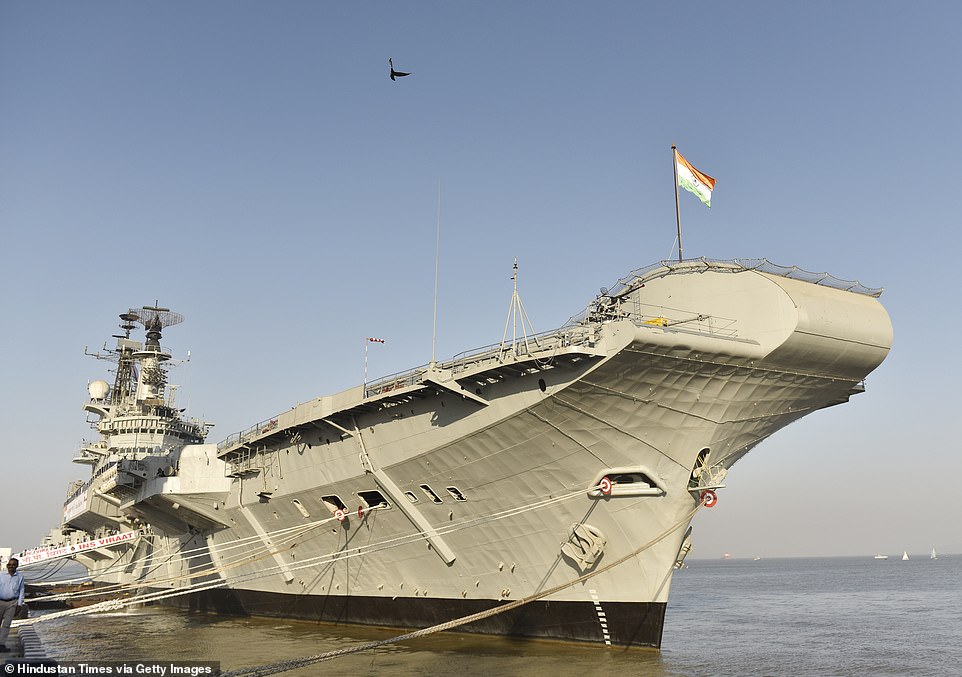 After the war the Hermes was retrofitted several times before falling into disuse, and was at last sold to the Indian navy in 1987 – where she was renamed the INS Viraat (pictured)

HMS Hermes: By the numbers

After 1970, the air wing consisted of up to 28 Sea Harriers, and nine Westland Sea King helicopters

Other plans for the Viraat – which means ‘Giant’ in Sanskrit – would have seen her turned into floating museum or a hotel, but both schemes fell through.

‘Once the ship docks at Alang, it will take us around 9-12 months to dismantle it and then we shall sell it as scrap to recover the cost,’ Shree Ram Group chairman Mukesh Patel told AFP.

‘We have been approached by two motorcycle makers for using the steel from the warship to build bikes… But nothing has been finalised yet,’ he said.

At the time of her decommissioning, the vessel had sailed more than 700,000 miles, roughly equivalent to 28 times around the globe.

During the Falklands, the Hermes – known as the ‘Grand Old Lady’ of the Royal Navy – was considered too valuable to risk getting close to the fighting, and instead stayed at range, using her complement of Harrier jump jets to keep Argentine fighters and bombers which were attacking British ships and troops at bay.

While the ship never saw combat operations during her years in India, she still wrote her name into the history books – after Prime Minister Rajiv Gandhi allegedly used her to go on holiday alongside other prominent politicians. The claim was officially denied.

The Viraat completed her last voyage under her own steam in 2016, when she sailed from Mumbai to Kochi, where her engines were stripped out.

She was then returned to Mumbai for an official decommissioning ceremony before her weapons and combat systems were stripped out. She has sat idle at the port since then. 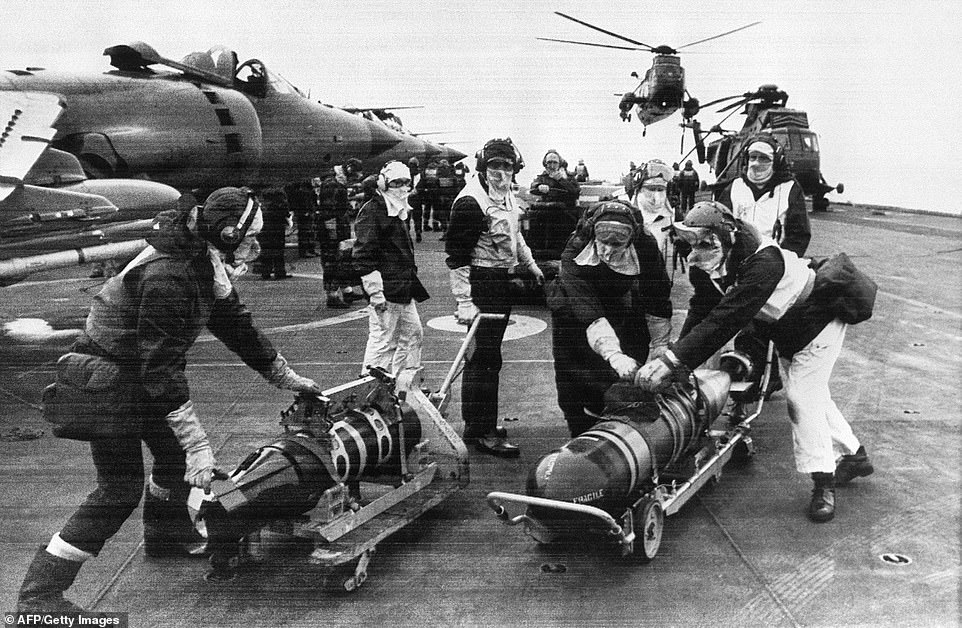 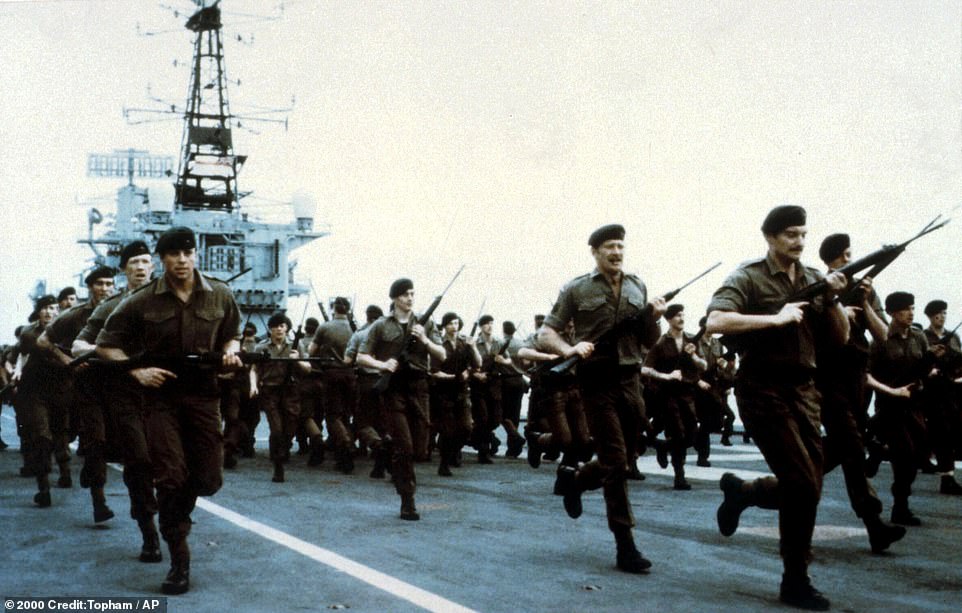 British Royal Marines are pictured exercising on the Hermes’ flight deck in 1982, as the ship sailed towards the Falkland Islands at the head of Royal Navy forces that were tasked with recapturing them 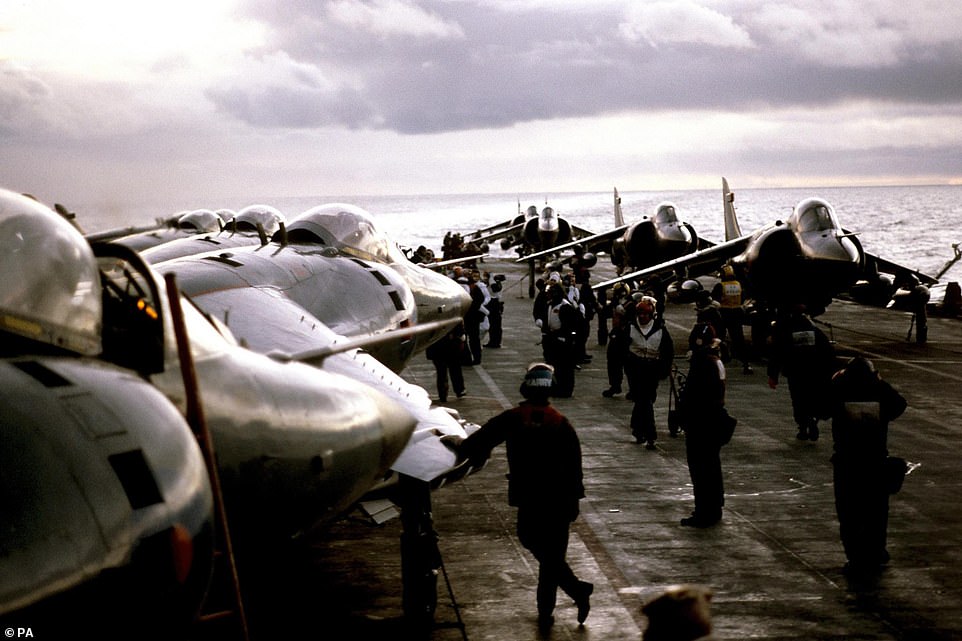 Crewmen stand alongside their Sea Harrier aircraft on board the Hermes as she cruises close to the Falklands, in 1982 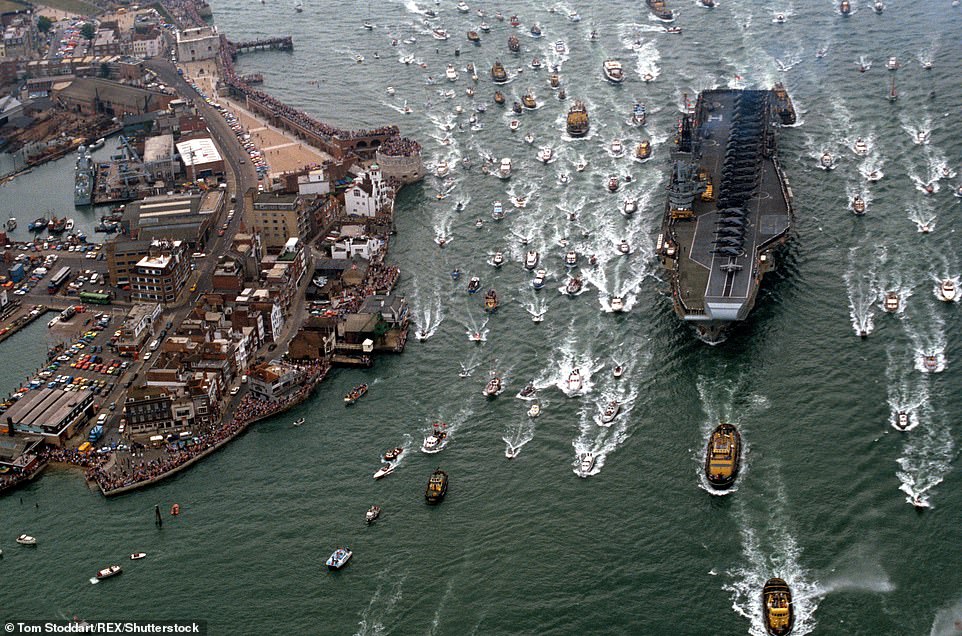 The Hermes is given a hero’s welcome as she arrives back in Portsmouth following victory over Argentina, accompanied by a flotilla of smaller boats and watched by hundreds of people from the dock 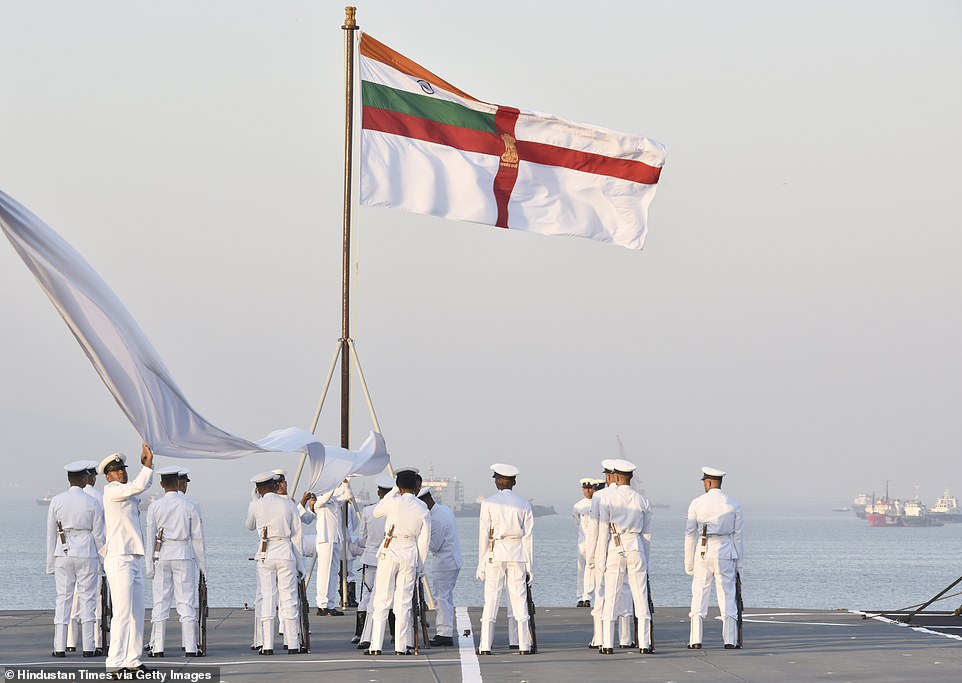 Indian sailors remove the flag from the Hermes – then known as INS Viraat – in 2017, as she was officially decommissioned in Mumbai before being sold for scrap

To say the HMS Hermes had a difficult start to life would be understating the fact – construction on the aircraft carrier, initially dubbed HMS Elephant, began in 1944 during World War Two, but conflict ended before she had been completed.

Her hull then sat in the dockyard in Barrow-in-Furness until 1953, when it was launched simply to get it out of the way so that other ships could be constructed.

Construction of the Hermes was not completed until 1957, and she didn’t enter active service until 1959, a full 15 years after work first began. 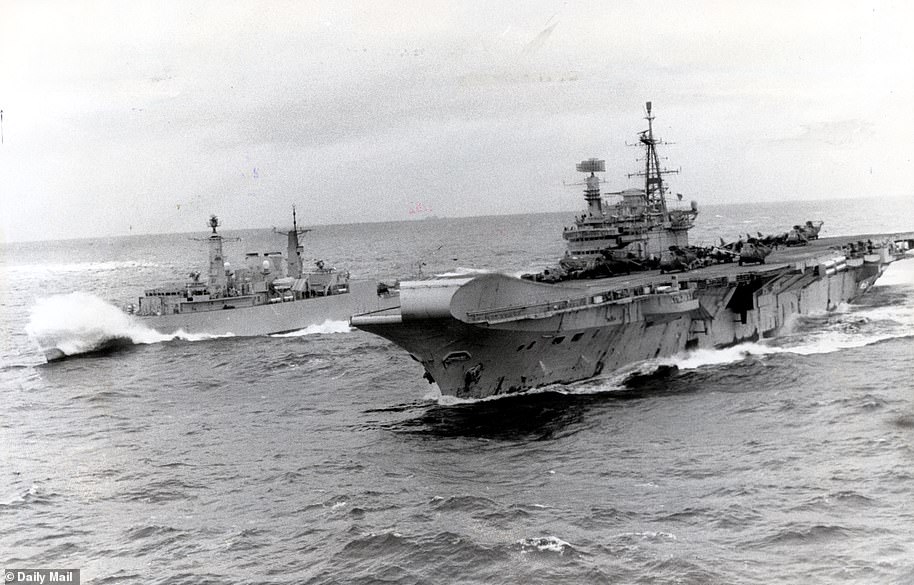 Construction began on the Hermes – right – during the Second World War when she was known as the HMS Elephant, stalled until 1952, was not finished until 1957, and she did not enter active service until 1959

In 1966 a review concluded that the Hermes was surplus to Royal Navy requirements, and a plan was concocted to sell her off to Australia. But after watching her during sea trials, the country concluded she would be too expensive, and passed.

Between the 1960s and 70s she was refitted twice, first to make her a Marine transport craft and second to make her an anti-submarine vessel, before a defence review in 1981 concluded she was – once again – surplus to requirements.

The plan was to scrap the Hermes, but then Argentina suddenly invaded the Falkland Islands in 1982, and plans were rapidly changed.

Instead of heading for the scrapheap, the Grand Old Lady – as she became affectionately known – was ordered to sail to the south Atlantic as the flagship of British forces and retake the islands.

Setting off three days after the Argentine invasion began with 12 Harriers and 18 Sea King helicopters on board, she was resupplied en route, and by the time she arrived had 16 Harriers, ten Hawker Siddeley Harrier GR3s, and a reduced complement of ten Sea Kings. 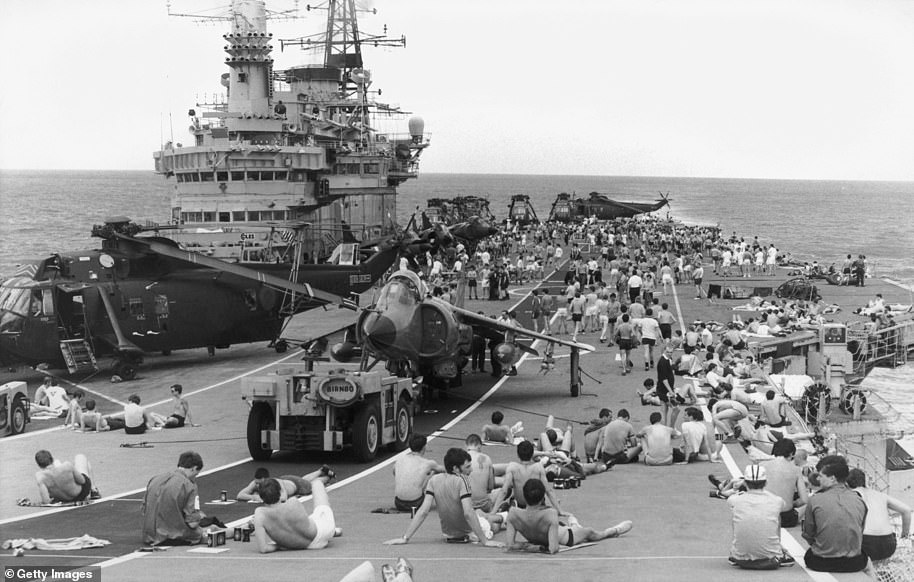 Almost sold to the Australians in the 1960s, the Hermes was due to be scrapped in 1981 until the outbreak of war with Argentina saw her become the flagship of Royal Naval forces (picture,d her crew sunbathe as they sail to the south Atlantic)

Considered too large and too valuable to risk in close-in operations with Argentinian forces, the Hermes played a support and supply role, using her Harriers at the furthest extent of their range to defend British ships against attacking aircraft.

The Hermes was also used to carry vital supplies supporting those fighting further forward, and to receive wounded heading backwards from the frontlines.

During the conflict she became a household name, featuring on a famous Newsweek magazine cover alongside the caption ‘The Empire Strikes Back’.

Returning to Portsmouth after the war ended, Hermes was given a hero’s welcome – surrounded by a flotilla of smaller vessels and watched from the dock by hundreds of spectators.

Shortly afterwards another plan was hatched to sell her to Australia, but it was again dropped. Instead, the Hermes remained with the Royal Navy until 1984 when she was taken out of service and left floating at Portsmouth.

Two years later, the Indian navy inquired about buying her – so she was towed to Devonport Dockyard to be retrofitted before being sold off the following year.

She then spent another three decades in service in the Indian navy – though never saw active combat again – before being decommissioned in 2017, at which time she was the oldest serving warship in the world.

Held at port in Mumbai since the, she has now been sold off for scrap and will be taken to Alang where she will likely be turned into motorcycles. 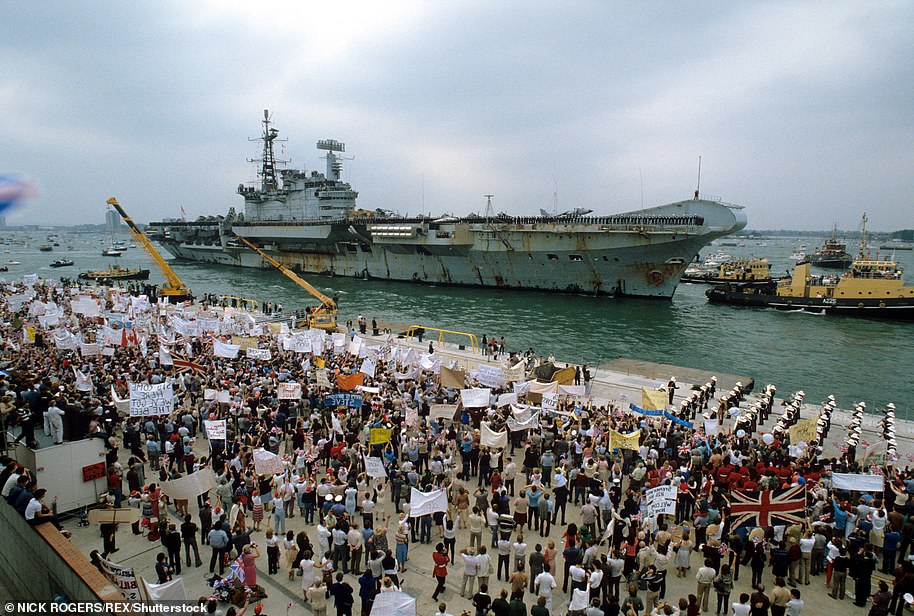 The Hermes became a household name during the conflict, and when she returned to Portsmouth after the conflict ended she was given a hero’s welcome at Portsmouth (pictured)