A hoarder who refused to put out the bins for ten years resorted to wearing nappies after the 27 tonnes of rubbish inside her home stopped her from accessing the bathroom.

Sylvie from York, who is in her 60s, began using incontinence pads and nappies after the accumulating waste left her surrounded by five to six feet of rubbish in all her bedrooms as well as down the stairs, along the hall and in the kitchen.

The home-owner, who had refused to let anyone inside her home for almost 20 years, said the rubbish also affected her mental wellbeing and put her physical health at risk.

She said: ‘I felt very embarrassed, it had got so bad. But I couldn’t see it from depression. 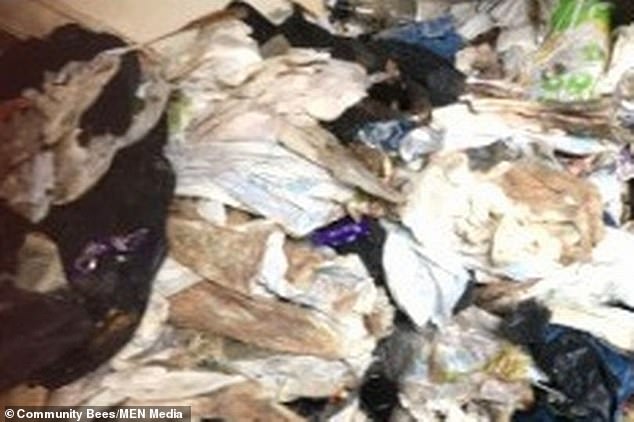 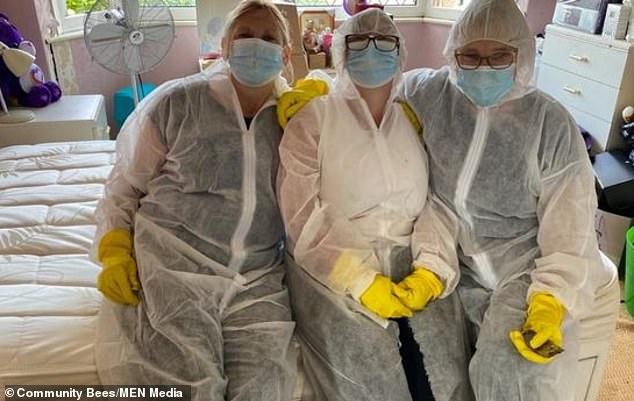 Volunteers from Community Bees helped Sylvie from York, who is in her 60s, clean her home and installed new floorboard and units in her kitchen

‘The rooms were really bad from floor-to-ceiling you couldn’t get into the house really.

‘I slept on top of the rubbish, I only had use of the bathroom if I clambered over the rubbish, and I had no kitchen as I couldn’t get to it.

‘I didn’t have a sink, I couldn’t get to my fridge or my freezer. I just used to sit on the doorstep during the day.’

Sylvie, who was living in a small space at the top of the stairs, was unable to access her fridge and freezer and kept food in the hall and stairs, eating it without storing it properly.

Due to the accumulating waste, piles of hoarded items also filled the two downstairs living rooms.

Concerned neighbours, who noticed Sylvie never put her bin out for collection and would sit on her front doorstep for hours, wanted to help.

After regular conversations, Sylvie slowly started opening up her neighbours Craig and Sarah and told them about the state of her house and how she was feeling.

She told them that she was suffering from depression, feeling worthless and hopeless, and that she had not let anyone into her home for years because she was embarrassed and ashamed of how bad it had become.

Eventually she let Craig inside with the hope that he might be able to help.

After a lot of phone calls to try and find the right support for Sylvie, the neighbours called Michaela Shaw at voluntary group Community Bees.

Sylvie said: ‘Michaela put me at ease straight away. She didn’t judge, she smiled and was happy to look at my situation.’

With the help of three neighbours and volunteers Michaela and Pauline, 27 tonnes of waste were removed from Sylvie’s house over the course of one week. 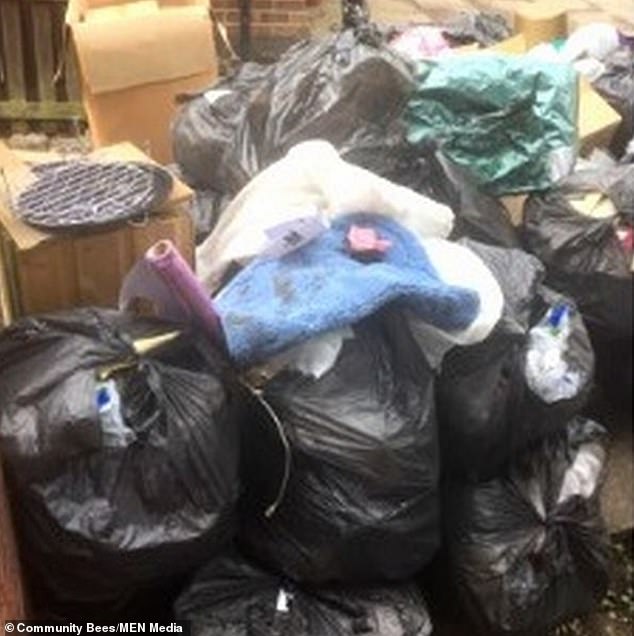 Sylvie was forced to live in a small living space at the top of the stairs and was surrounded by five to six feet of rubbish in all her bedrooms as well as down the stairs, along the hall and in the kitchen

During the clean-up, it became apparent that Sylvie’s house had been flooded some years ago and there were bare floor boards throughout the house.

The boards were full of holes, created by the weight of the rubbish, allowing flies and vermin to get inside the house.

After a mammoth overhaul, which required the use of three large skips, Sylvie’s house became a home again.

New floorboards were put down, the bathroom, her bedroom and living space were tidied and easily accessible, and a new oven, kitchen sink, and units were installed.

Sylvie said: ‘I cannot thank Michaela and Pauline enough, and they still come and see me and help me every week.

‘They don’t just come and see me, we chat, laugh and enjoy each other’s company, you can just give them a ring and they are there for you.

Due to the accumulating waste, Sylvie could not access most of the rooms in her home. Pictured: The pile of rubbish on Sylvie’s washing machine

‘There’s not enough words in this world to say how much they’ve helped me and if people are suffering like me, get in contact with Community Bees you’ll never regret it, you will not regret it at all.’

Sylvie is now also looking after her mental wellbeing with the help of health professionals, keeping up with appointments and her medication.

She has also visited a supermarket on her own for the first time in years and is now keeping on top of her housework.

The Community Bees volunteers said they were proud of how far Sylvie had come.

Addressing Sylvie directly, Michaela said: ‘You have been so brave and I know a lot of tears have been shed, but good ones. You have come so far in the past four months turning your life around.

‘It is so lovely to see you each week, telling me how you’re getting on and what you have achieved.’