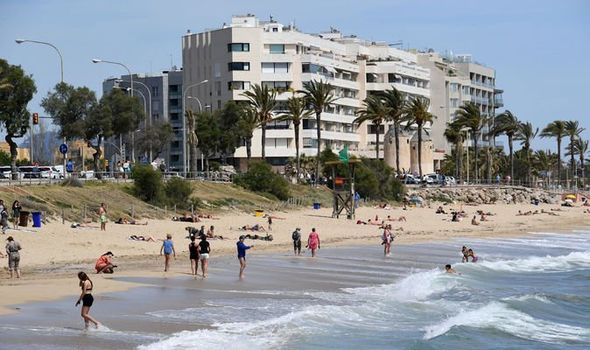 Several crew members have been evacuated although none are said to be seriously hurt. Around a dozen crew have stayed on board to tackle the blaze. A spokesman for an emergency response coordination centre said: “The vessel that is on fire, Grande Europa, is stationary some 15 miles off Cabrera. “The evacuated crew members are being assisted by doctors but none are seriously hurt.

“The causes of the fire are unknown at the moment.

“The Special Plan Against Sea Water Contamination has been activated in a pre-alert phase because of the fire.”

The 20-year-old vehicle carrier was on its way from Sardinia to Valencia.

It comes after it was revealed tourists have been banned from taking mud baths in a popular area of the Costa Blanca, on the Spanish mainland, and warned they could be fined £500 if they are caught flouting the rules.

Holidaymakers visiting Spain have flocked to the salt lakes of La Mata and Torrevieja for years and the social networks have been full of pictures and videos of people smeared in thick black mud against dramatic pink sunsets.

But the local council says this has always been illegal and warns tourists are dicing with death as the extraction of salt is carried out by automatic machinery that moves underwater.

They say mud baths in the lakes are “absolutely prohibited under any type of circumstance” and private security officers will be patrolling the area.

Tour companies have also been warned NOT to publicise or organise outings as part of their tour packages and they will also be sanctioned.

'Mark is wrong': Facebook staff disagree with Zuckerberg over Trump