The holidays are CRASHING! Coca-Cola truck overturns on M62

The holidays are CRASHING! Coca-Cola truck overturns on the busy M62 spilling bottles of soft drink across the motorway

A motorway had to be closed after a lorry overturned and scattered bottles ofCoca-Cola across several lanes.

The accident happened at junction 28 of the M62 near Tingley, West Yorkshire. at around 11am today.

The eastbound carriageway remained closed until approximately 2.15pm after the lorry and its cargo, which also included bottles of Schweppes lemonade, was cleared from the road. 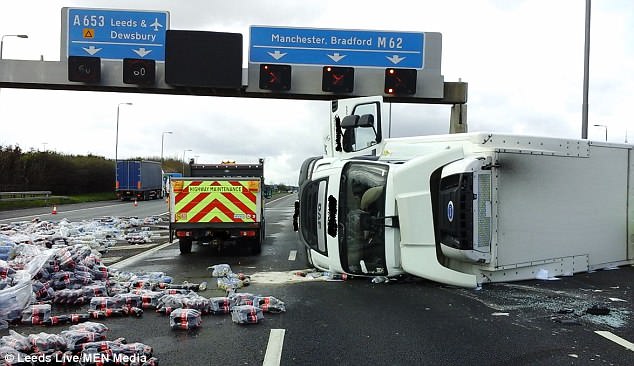 A truck lost its cargo of Coca-Cola on the M62 near Tingley, West Yorkshire earlier today 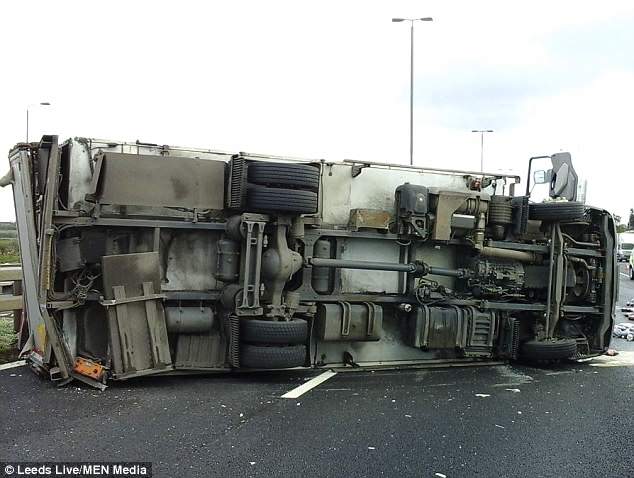 Nobody was injured in the accident which caused tailbacks past the M1 junction to Lofthouse.

Police closed slip roads between the M1 and the M62 eastbound to avoid further congestion spilling onto the M1.

The accident followed a series of accidents and mishaps on the M62 today.

A lorry overturned on the westbound carriageway at junction 28, at around 6.30am. The lorry spilled its load leading to an earlier closure of the M62.

A man suffered minor injuries in the accident and was taken to Leeds General Infirmary.

A broken down lorry on the eastbound carriageway between junctions 26 for Chain Bar and 27 for Birstall led to the closure of two lanes, causing long delays for motorists in the morning.

And another accident took place on the M62 westbound between junctions 28 and 29 causing the closure on one lane.