Lai, an outspoken advocate for democracy in Hong Kong, was charged with fraud on December 3 for allegedly violating the lease terms for office space for his media company, Next Digital. He was later charged again on December 12 under the national security law, on suspicion of colluding with foreign forces and endangering national security. 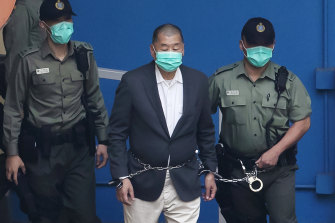 Lai is among a recent string of pro-democracy activists and supporters arrested by Hong Kong police in recent months, prompting concerns that Hong Kong is cracking down on dissent following Beijing’s imposition of a national security law on the semi-autonomous Chinese territory in June.

He appeared in court on Wednesday, local time, and was released on bail of 10 million Hong Kong dollars ($1.72 million). He had been kept behind bars since December 3.

Lai's bail terms require him to be confined to his home unless he has to report to the police or go to court. Other requirements include surrendering his travel documents and a ban on meeting with foreign officials, publishing articles on any media, posting on social media and giving interviews.

Hong Kong prosecutors appealed to have the bail bid overturned, but were denied.

Beijing imposed the national security law in response to protests in Hong Kong that began in June 2019 over a proposed extradition law and expanded to include demands for greater democracy in the former British colony.

In certain cases, those charged under the national security law could also face trial in mainland China, where the legal system is highly opaque. Serious offenders of the law could face life imprisonment.

The US has sanctioned more than a dozen Chinese officials and Hong Kong politicians, including the city’s leader, Carrie Lam, over the crackdown on opposition in the city.

US Secretary of State Mike Pompeo tweeted earlier this month that Hong Kong’s security law “makes a mockery of justice”.

Hong, Jimmy, Kong, L., media, tycoon
You may also like: