HONG KONG (Reuters) – Candlelight Hong Kong vigils mourning a student who died on Friday after a high fall during a pro-democracy rally quickly spiraled into street fires and cat-and-mouse clashes between pro-democracy protesters and police.

The center of violence appeared to be on Nathan Road, in the Kowloon district of Mong Kok, one of the most densely populated locations in the world, where activists built barricades and trashed an entrance to the metro station.

Police used a robot to try to detonate a suspected explosive device on a side street after at least three blasts in the area amid a standoff with petrol-bomb throwing protesters for hours.

Chow Tsz-lok, who studied at the University of Science and Technology (UST), fell on Monday from the third to the second floor of a parking lot when protesters were being dispersed by police. It was the first student death in months of rallies.

Chow, 22, died on graduation day for many UST students. His death is likely to fuel anger at police, who are under pressure over accusations of excessive force as the former British colony grapples with its worst political crisis in decades.

UST students trashed a campus branch of Starbucks, part of a franchise perceived to be pro-Beijing, and rallies are expected across the territory over the weekend.

“Condemn police brutality,” they wrote on the restaurant’s glass wall.

Hundreds of students, most in masks and carrying candles, then lined up in silence at UST to lay white flowers in tribute.

Thousands also left flowers at the spot where he fell at the car park in Tseung Kwan O, to the east of the Kowloon peninsula, occasionally singing hymns.

In the shopping district of Causeway Bay, hundreds lined the streets in silence, with the eerie hum of the city in the background.

Then the mood changed.

In Mong Kok, dozens of activists barricaded off Nathan Road, which leads to the harbor to the south. They vandalized a closed metro entrance, throwing in bricks and pouring oil through the metal grill, and destroyed a phone booth in a small explosion. There were clashes and fires in the New Territories town of Sha Tin.

In Tseung Kwan O, where people had been leaving flowers and silently crying for hours, people screamed encouragement and abuse after a traffic light was set on fire.

“We played netball together for a year,” he told Reuters in tears. “I hope he can rest in peace. I really miss him.” 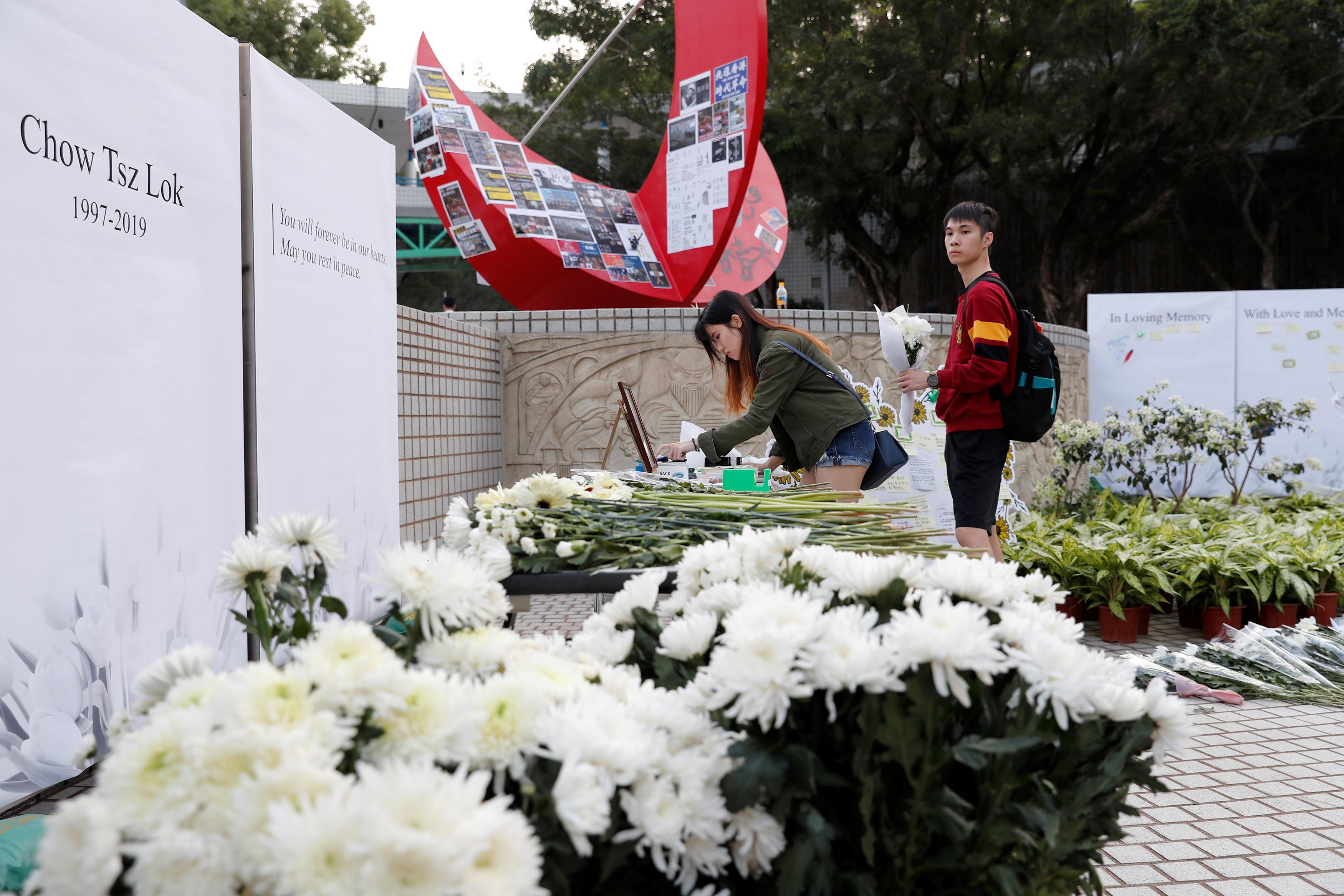 Students and young people have been at the forefront of the hundreds of thousands who have taken to the streets since June to seek greater democracy, among other demands, and rally against perceived Chinese meddling in the Asian financial hub.

Hong Kong returned to Chinese rule in 1997 under a “one country, two systems” formula, allowing it colonial freedoms not enjoyed on the mainland, including an independent judiciary and the right to protest.

China denies interfering in Hong Kong and has blamed Western countries for stirring up trouble.

The protests were ignited by a now-scrapped extradition bill allowing people to be sent to mainland China for trial, but have evolved into wider calls for democracy. They pose one of the biggest challenges for Chinese President Xi Jinping since he took charge in 2012.

Two pro-Beijing newspapers ran full-page ads, commissioned by “a group of Hong Kong people,” calling for a postponement of the lowest-tier district council elections set for Nov. 24, a move that would infuriate those calling for democracy.

In June, Marco Leung, 35, fell to his death from construction scaffolding after unfurling banners against the extradition bill. Several young people who have taken their own lives have been linked to the protests.

The university called for an independent investigation into Chow’s death, saying an ambulance was blocked by police cars and ambulance officers had to walk to the scene, causing a delay of 20 minutes. 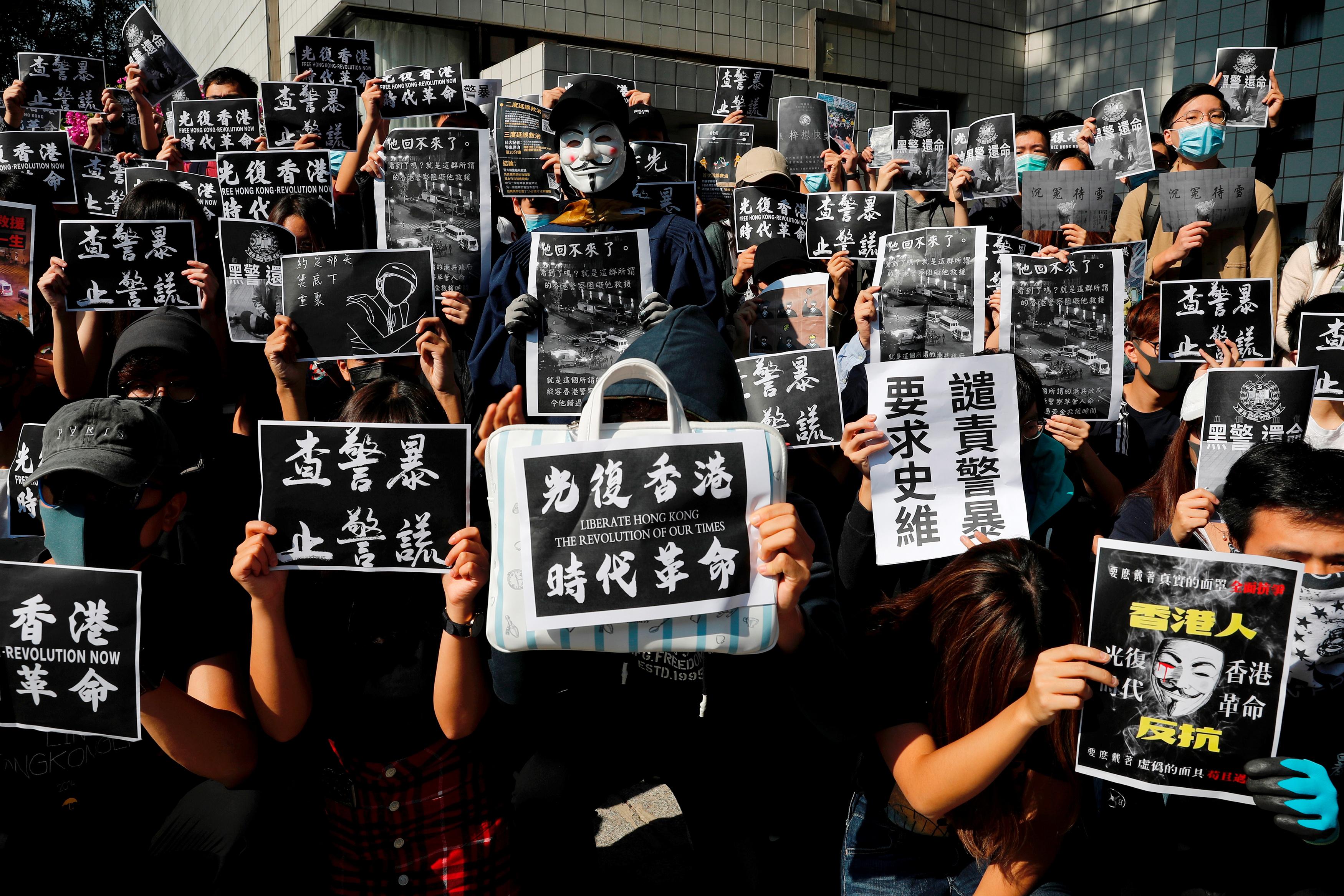 The government expressed “great sorrow and regret”. A police spokeswoman, tears in her eyes, said officers would find out the truth as soon as possible and urged the public to be “calm and rational”.

Police have denied blocking an ambulance. The car park said it would release CCTV footage as soon as possible.

Protests scheduled over the weekend include rallies in shopping malls, some of which have previously descended into chaos as riot police stormed areas crowded with families and children. Protesters have called for a general strike on Monday morning and for people to block public transport. Such calls have come to nothing in the past.

Last weekend, anti-government protesters crowded a shopping mall in running clashes with police that saw a man slash people with a knife and bite off part of the ear of a local politician.