Departments must file plans to move thousands of officials from London into new sites across Britain, and York – which is the site of a push to relocate the House of Lords – was identified as a potential site to base senior civil servants.

A source told The Times it was ‘pretty serious’, with some officials looking to buy property in the area.

They added: ‘It’s not just the House of Lords. Senior civil servants who are close to decision-making are already looking at Rightmove to see what they can buy for the cost of a terraced house in East Dulwich. And they like it. They are looking at substantial Edwardian villas in Harrogate.’ 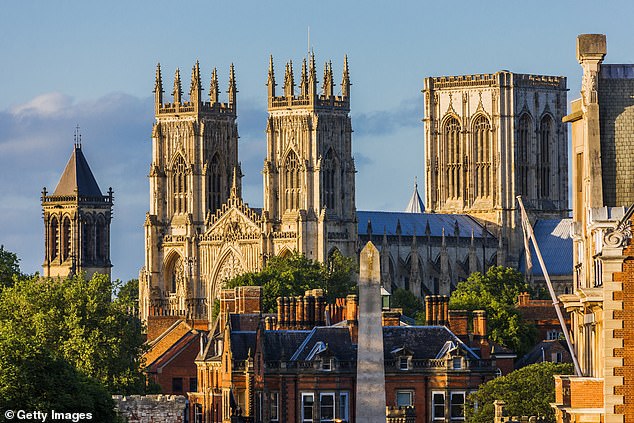 Departments must file plans to move thousands of officials from London into new sites across Britain, and York – which is the site of a push to relocate the House of Lords – was identified as a potential site to base senior civil servants

No final decisions have been made yet but ministers plan on establishing several regional ‘hubs’ of civil servants, another source said.

Senior figures have said that moving the House of Lords to York was still ‘very much on the agenda’ – along with the possibility of a significant Whitehall presence.

A source said: ‘The Lords is a major thing. But there could be lots of stuff. You could put the Home Office there. The step change will be to move everything other than the secretary of state and private office or an entire directorate.’

One government official said the Prime Minister was ‘really, really keen’ on ideas of decentralising officials from the capital.

Departments must now submit preliminary plans in the next two weeks outlining how many staff they could move out of London ahead of detailed work to find out the best locations for various hubs.

Plans to move the House of Lords to York were reveled in January following Boris Johnson’s major breakthrough among constituencies in Labour’s northern ‘Red Wall’ in the December election.

Ministers had hailed efforts to ‘connect with the whole of the country’ after the PM ordered detailed work on the practicalities of putting the Lords in Yorkshire.

MPs and peers are already due to move out of the building for around six years in 2025 while the multi-billion pound overhaul takes place.

If York is chosen as a new seat, the city would become a centre of political power for the first time since the English Civil War – when it played host to the Council of the North.

The three-hour travel time is seen as manageable, with technology deployed to minimise the need to be in the same location as MPs and ministers.