How a ‘seismic disaster’ started Trudeau’s descent into unpopularity

Last February the Canadian Prime Minister travelled to India for a week-long visit. It should have been a triumph for Trudeau, who had previously been greeted like a rock star as he sauntered across the global political stage. Instead, in Kinsella’s words, it was a "seismic disaster". 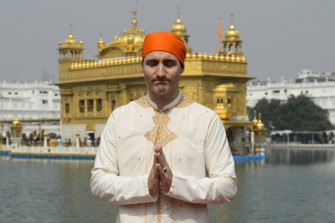 Justin Trudeau’s 2018 trip to India was referred to as possibly “the least successful foray into that country since the repelled Mongol invasions of the 13th century” by a Canadian newspaper. Credit:The Canadian Press/AP

It is, he says, the event that best explains why Trudeau is at risk of losing the prime ministership when Canada's federal election is held on October 21.

To many Canadians, the trip looked more like an extravagant taxpayer-funded family holiday than a serious diplomatic mission. Rather than a heavy hitter, Trudeau was welcomed at the airport by India’s junior agriculture minister. He flubbed his facts about the Canadian and Indian trade relationship. Many believed the traditional Indian outfits Trudeau wore during were over-the-top, if not patronising to his hosts. Worst of all: the Canadian delegation invited a convicted terrorist to an official function.

Canadian comedians lambasted the trip. Meanwhile The Toronto Star, a newspaper usually friendly to Trudeau, said in an editorial that his India visit "may be the least successful foray into that country since the repelled Mongol invasions of the 13th century".

"That trip confirmed the doubts Canadians had about his maturity and about his judgment," Kinsella says of the 47-year old prime minister. "And things just got worse from there." 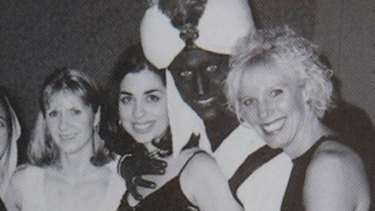 Justin Trudeau has apologised after this photo emerged showing him in brownface makeup at an ‘Arabian Nights’ costume party in 2001.

Trudeau suffered another major setback on Thursday, Australian time, when a photograph emerged of him posing in brownface makeup at an 'Arabian Nights' party in 2001, forcing him to apologise. More damaging material surfaced hours later when Canadian publication GlobalNews published a video showing the Prime Minister in the early 1990s wearing dark make-up and an Afro wig.

Trudeau was in Winnipeg, Manitoba, for a campaign stop on Thursday, and said he was wary of being definitive about how many times he'd worn brown or blackface make-up because he didn't recall the recent pictures that had surfaced.

Previously, the idea that Trudeau could become a global laughing stock seemed unthinkable.

He swept to power in 2015, a surprise victory that saw his centre-left Liberal Party gain 150 seats of the 338-seat Canadian parliament and end a decade of Conservative Party rule. Trudeau's win carried echoes of Kevin Rudd's victory in 2007 and Barack Obama's 2008 win: fresh-faced progressives with heady ambitions and a surplus of charisma. He wanted to tackle climate change, improve relations with Canada's First Nations and open the country's doors to new immigrants.

The self-described feminist won applause for appointing 15 men and 15 women to his first cabinet. When asked by a journalist why it was important to have a gender-balanced cabinet, Trudeau replied: "Because it's 2015."  The moment instantly went viral, befitting a prime minister who seemed tailor-made for the modern social media age. He was even filmed jogging shirtless through the strets of Toronto.

Six months into his first year as prime minister, Trudeau achieved an approval rating of 65 per cent, the second highest in modern Canadian history. "He was this new, young, hip force in global politics," says Canadian political scientist David Moscrop. "He made Canada cool. From 2015 to 2017 it looked as though he was bulletproof." 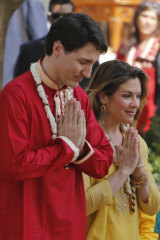 Justin Trudeau with wife Sophie during that infamous Indian excursion.Credit:AP

When Donald Trump achieved his own shock election victory in 2016, Trudeau positioned himself as a counterpoint to the US President. When Trump issued an executive border banning immigrants from several Muslim-majority countries from entering the US, Trudeau tweeted: "To those fleeing persecution, terror & war, Canadians will welcome you, regardless of your faith. Diversity is our strength #WelcomeToCanada."

Yet when they met him in person, Trump's wife and daughter seemed smitten by the suave Canadian who has appeared on the cover of GQ and Rolling Stone. "Why can't he be our president?" the music mag asked.

But by April this year Trudeau's approval rating had sunk to 28 per cent, lower than the US President's.

That comes despite some big legislative achievements including the legalisation of marijuana and the passage of a carbon tax. Unemployment is low at 5 per cent and the economy grew by 3.7 per cent in the most recent quarter, far better than expected.

"It’s hard to be less popular than Trump but Trudeau has managed to do that,” says Kinsella, who previously served as a Liberal Party campaign strategist. "Once Canadians waded through the magazine covers they found there wasn’t a lot of 'there' there."

The embarrassment of Trudeau's India trip was followed by what became known as the SNC-Lavalin Affair. In August the Canadian Parliament's ethics commissioner found that Trudeau improperly influenced the then minister of justice and attorney-general to intervene in a criminal case against SNC-Lavalin, a Quebec-based construction company that is suspected of bribing the Libyan government during the regime of Muammar Gaddafi.

Trudeau has denied exerting inappropriate pressure, but the ethics commissioner found Trudeau had violated the country's Conflict of Interest Act. The affair led to the downfall of two cabinet ministers and Trudeau's top advisor. Most importantly, it made a previously idealistic prime minister look like just another politician.

There were other slip-ups too. When the communist Cuban dictator Fidel Castro died, Trudeau described him in a statement as a "larger than life leader who served his people". He was accused of "mansplaining" when he interrupted a woman at a town hall event and suggested she use the word "people-kind" rather than "mankind".

"He has proven to be a polarising figure – in broad terms popular with women and young voters, but disliked in a visceral way by men, particularly older men, who dismiss him as a fop and a phony – someone who got to be where he is because of his name and not his achievements," he writes.

"He has agitated a tendency prevalent across the Western world – the rise of authoritarian populism- that was noticeably absent in Canada prior to his election." 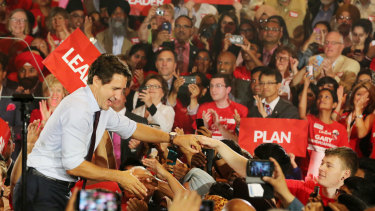 Trudeau campaigns ahead of the Canadian election of October 21, Credit:Getty Images

Moscrop says that Trudeau's loss of popularity was probably inevitable.

"It is extremely Canadian to build someone up and tear them down," he says, citing the tall poppy syndrome as one of many things Canada and Australia have in common.

"Like with Obama, he was new and exciting at the beginning but the same structural forces remain in place. Political history doesn't just teach us this – the guy's own family does."

Indeed, Trudeau's father Pierre won the 1968 Canadian election on a wave of what was known as "Trudeaumania". But by the next election his party had been reduced to minority government – a fate that could well befall his son.

The latest polls show that the election contest has tightened in recent weeks, with 36 per cent of Canadians saying they would support the Conservative Party and 32 per cent the Liberals. It's the best forecast for Trudeau's party since April. It remains unclear if Conservatives will pick up votes in the seats they need them, and whether voters embrace the party's solid but uninspiring leader Andrew Scheer.

"By comparison to Trudeau he certainly appears more drab, but for some he would seem more serious," Moscrop says.

Worryingly for the Liberals, Kinsella says the governmnt hasn't been able to frame the election around a clear policy choice between the two main parties.

"The election," he says, "is going to be a referendum on Trudeau himself."

a, disaster, How, Seismic, start
You may also like: