A major route through Essex was completely closed today after a tractor towing hay bales caught fire on the baking hot dual carriageway.

Police shut the A12 south of Chelmsford today as fire crews put out the blaze, which sent thick plumes of smoke into the skies above the road.

Motorists went on social media to tell of frustration at being stuck in their cars on one of the hottest days of the year. 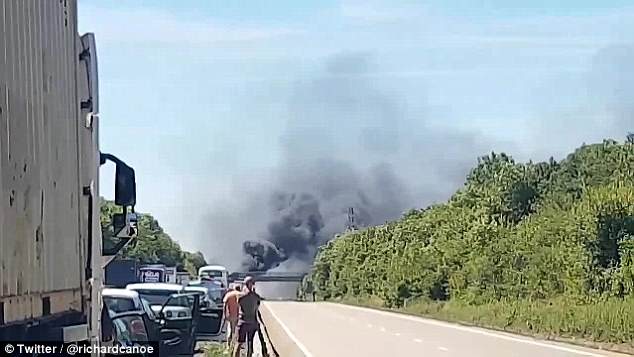 Elisa Vasquez-Walters tweeted: ‘Terrifying amount of smoke on A12. Does anyone know if people are ok?’

Essex Police tweeted: ‘We’re closing the A12 in both directions due to a fire between J17 for Howe Green and J16 for Galleywood.

‘It’s expected to be closed for some time and this will cause disruption. Please avoid the area and plan your journey.’

Difficulties travelling in the county were compounded by an accident on the nearby A127.

On that route, a lorry lost steel girders, which hit a car, which then collided with another vehicle.

No one was injuries but a lane of the dual carriageway was closed during the clean-up, and later reopened.