Hundreds more Italian bridges and tunnels at risk of collapsing including a major tourist route from Rome airport, experts warn

Around 70 per cent of the country's of 15,000 motorway bridges and tunnels were built more than 40 years ago and hundreds are not designed for today's heavy traffic. 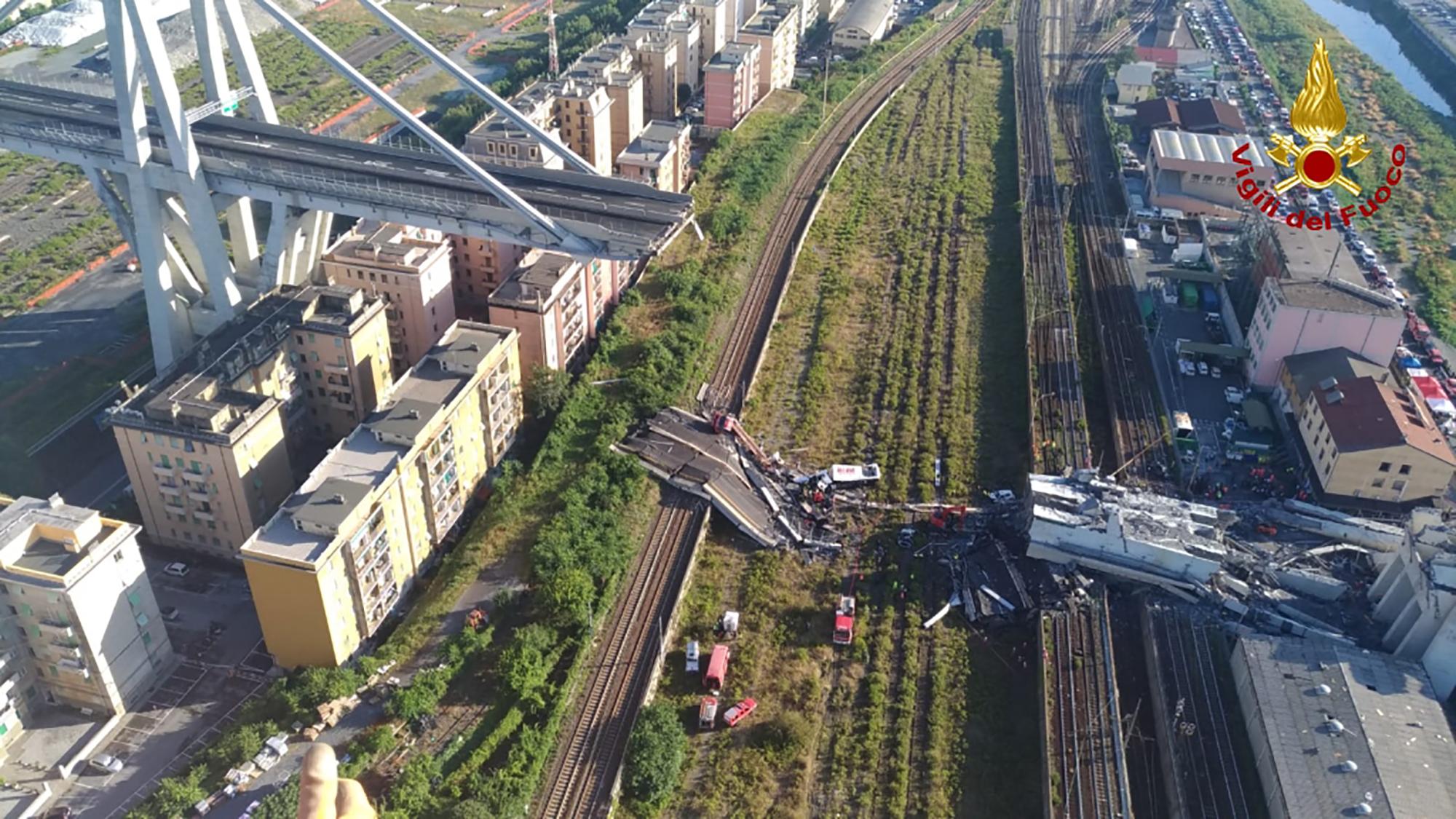 Lack of investment, poor maintenance and the involvement of mafia-run building companies using poor quality concrete could all contribute to more deadly disasters like the one on Tuesday.

“They have problems that, if not addressed in time, could potentially lead to structural failures,” a leading structural engineer told La Repubblica newspaper.

“The problem is not so much knowing which structures are at risk, but having the money to finance repairs and maintenance,” said the expert, who asked to remain anonymous.

Among the structures he claimed was at risk was the Magliana Bridge in Rome, which flows between the city centre and the capital’s busiest airport. 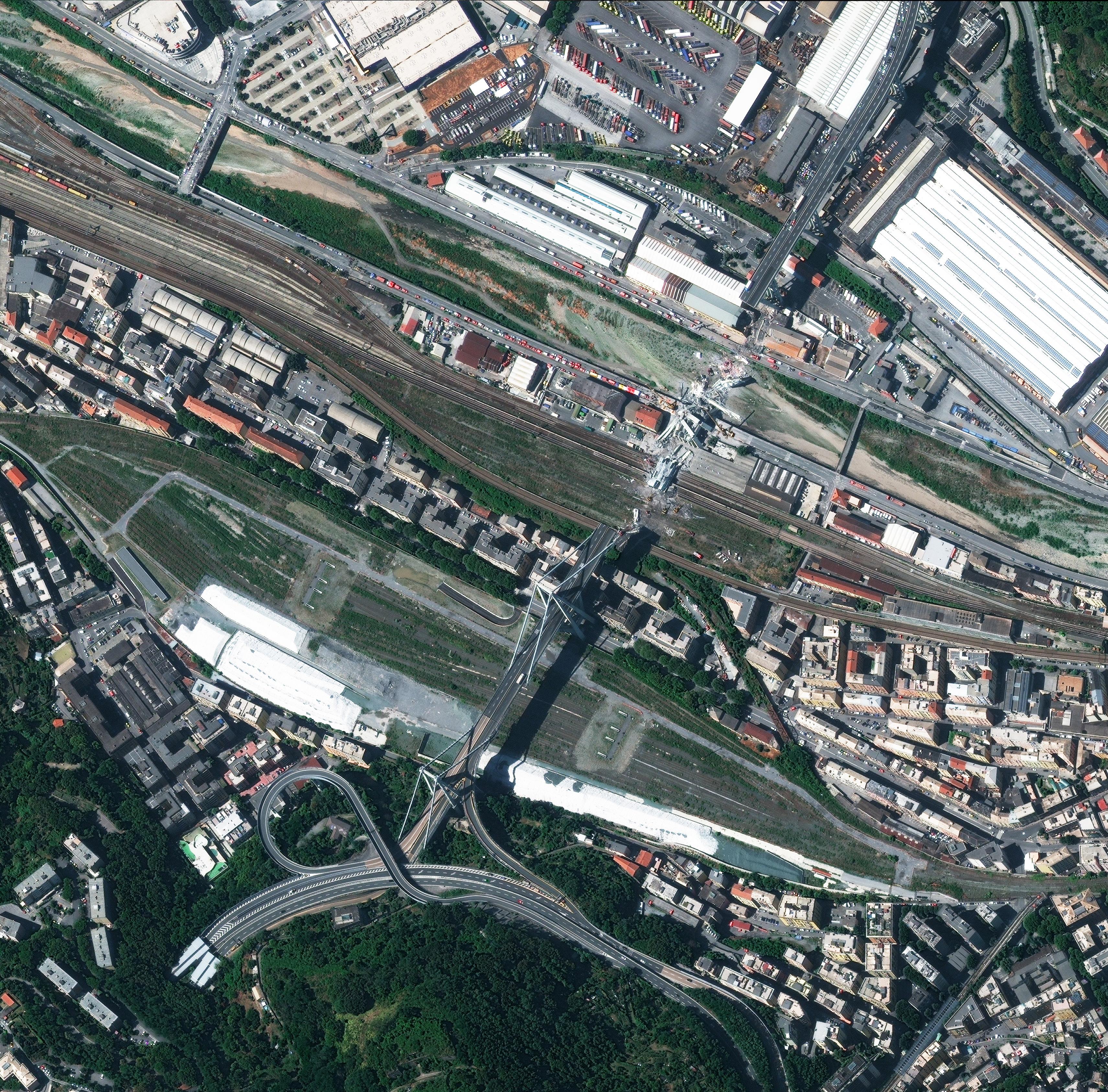 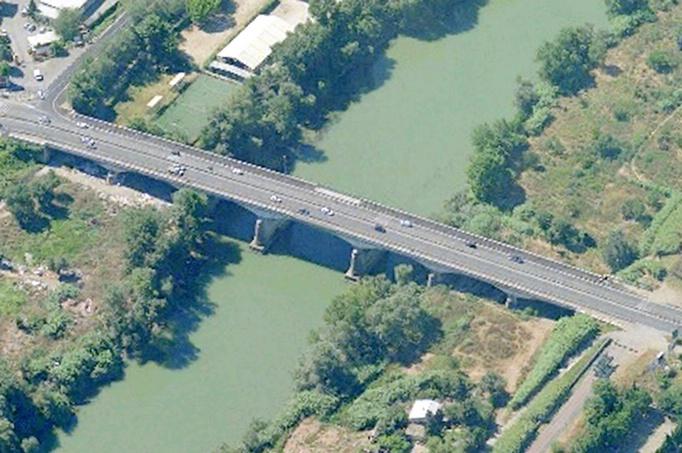 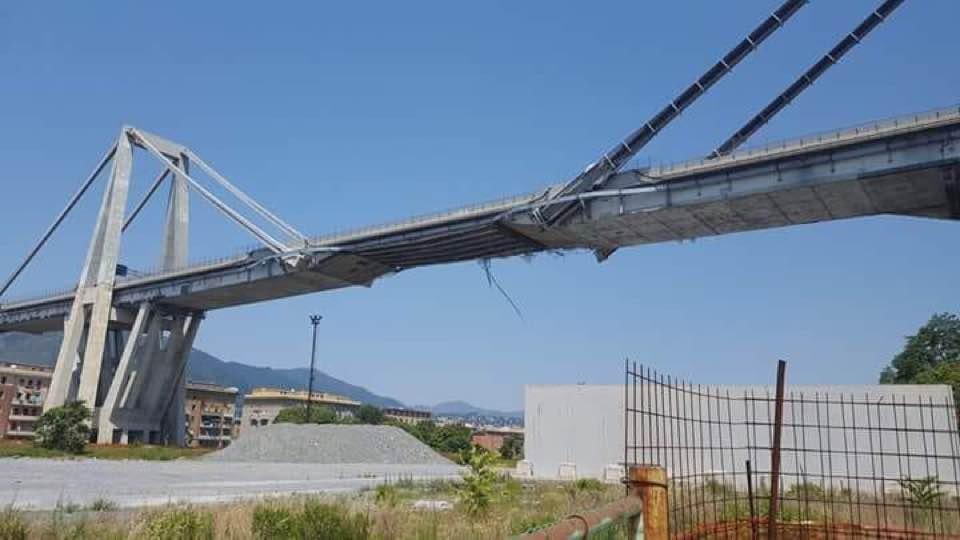 The structure – built just after the Second World War – is one of the main routes into central Rome for the four million tourists which visit the Italian capital every year.

Italy’s CNR civil engineering society said many structures dating from the 1960s, when the Morandi Bridge was built, have now surpassed their lifespan.

It has now called for a major plan to repair or replace tens of thousands of Italian bridges and viaducts which have been built in the last 70 years.

The warnings come after a 100m-long portion of Morandi bridge collapsed sending around 35 vehicles plummeting to the ground leaving 39 dead. Up to 20 more people are feared to have died. 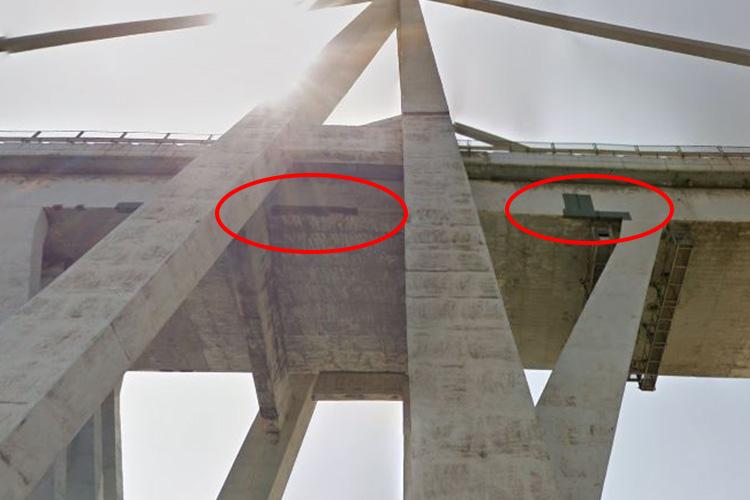 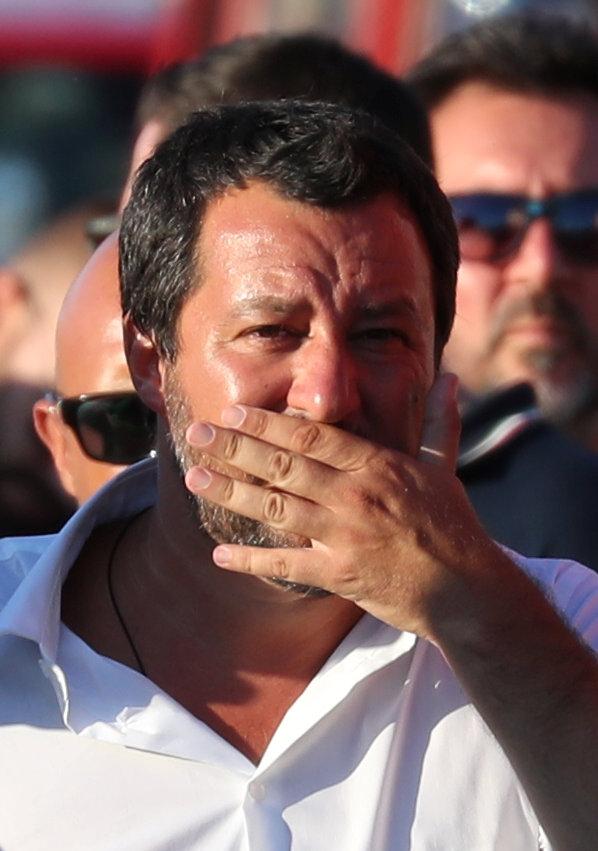 Several drivers have now revealed how they had their falls broken by a heap of rubble shed by a toppled concrete tower.

Former Serie A goalkeeper Davide Capello, 33, was on the bridge in his VW Tiguan 4×4 when it collapsed.

He revealed: "I fell with the tower and it must have cushioned me, while others fell into a void.

"I heard a dull sound, I saw the road going down and I was going down with her. I was lucid and I immediately called the firemen, then my family, it was shocking, I feel miraculous". 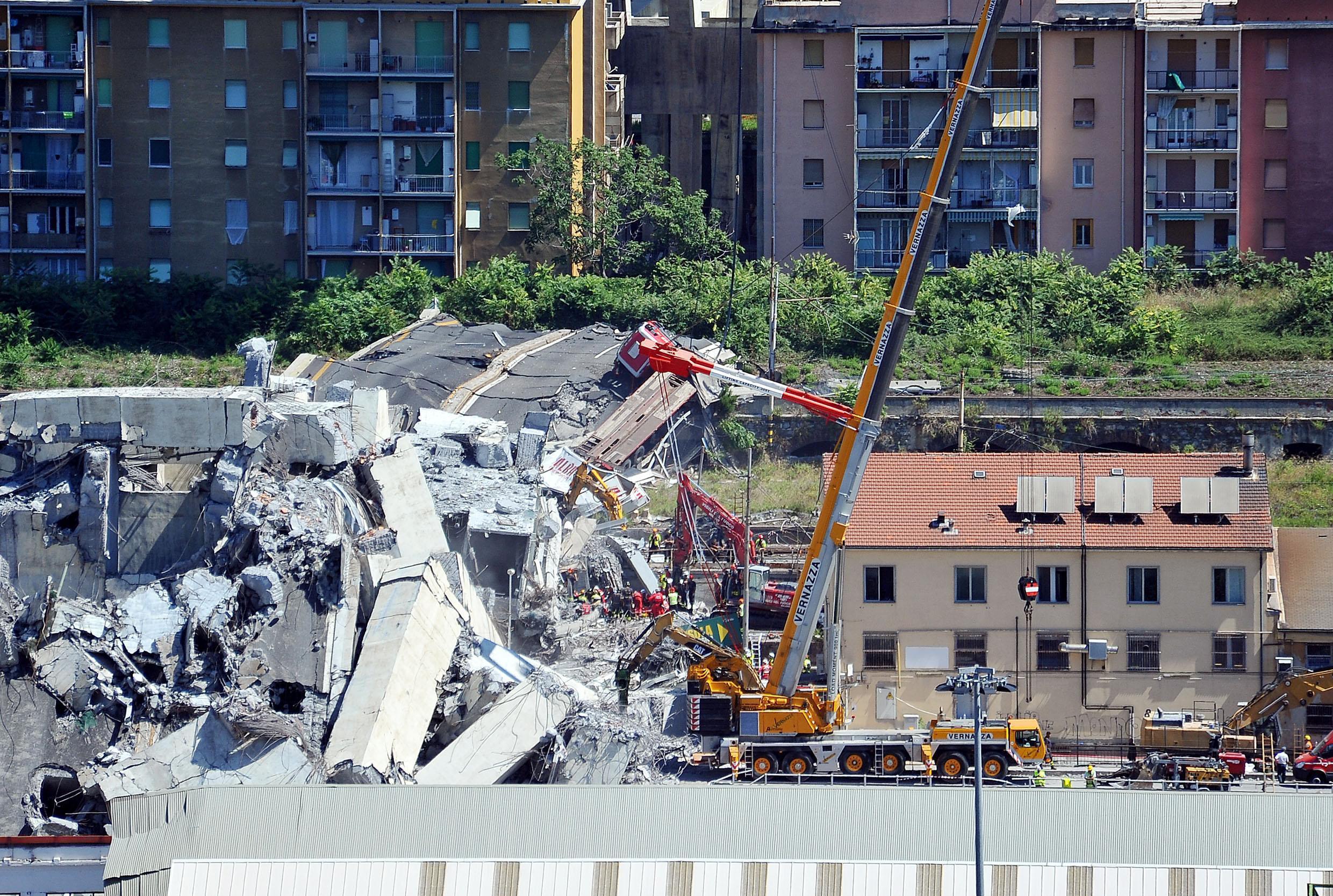 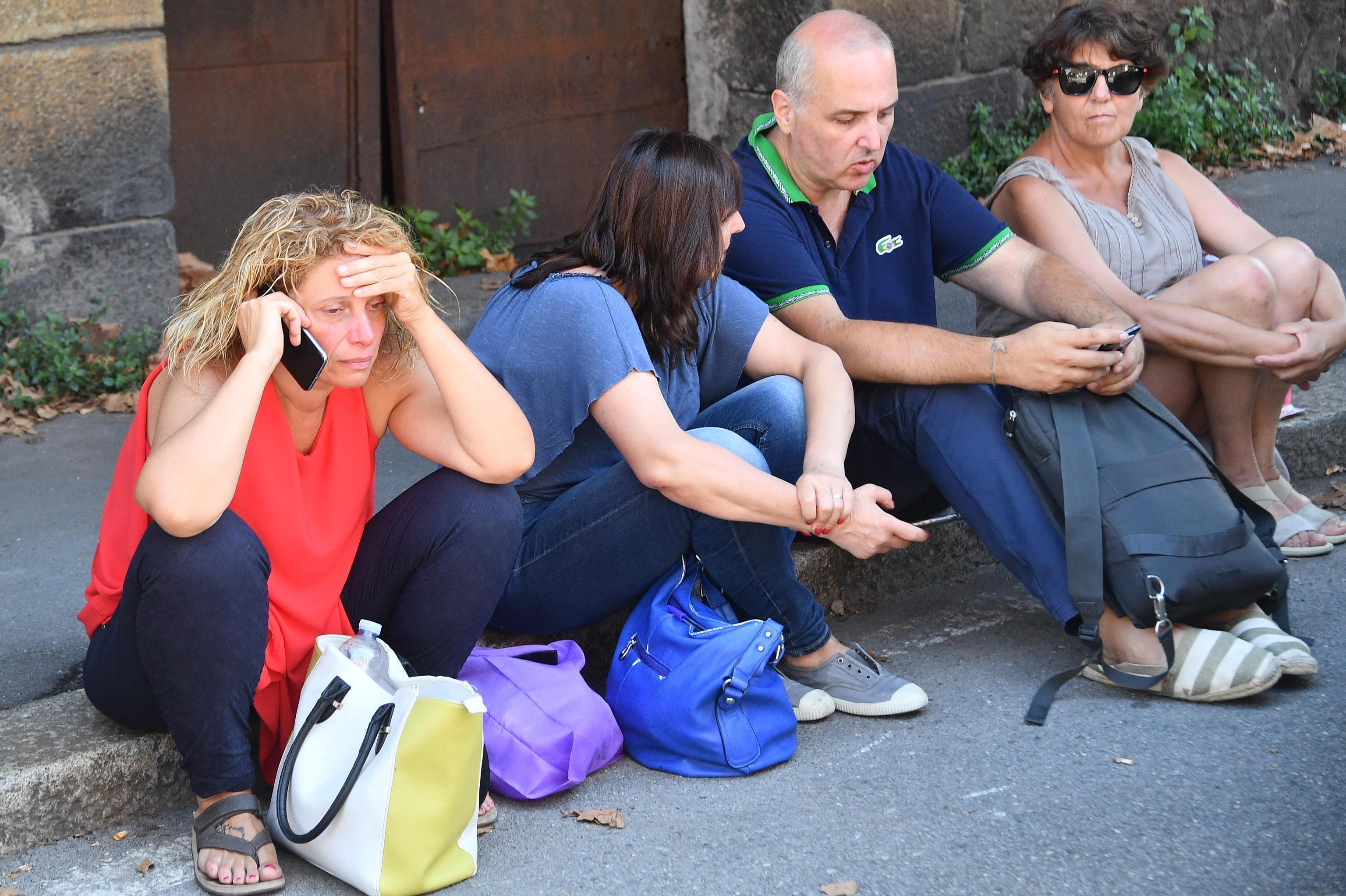 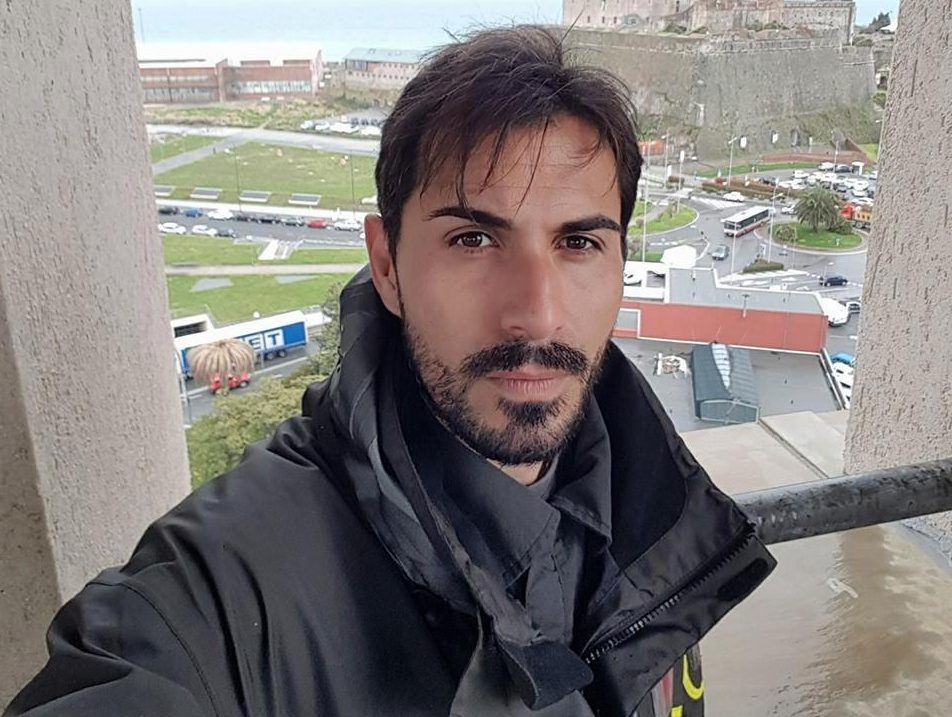 However, many others weren't so fortunate – including four Italian holidaymakers who were due to fly to France but chose to drive at the last minute instead. 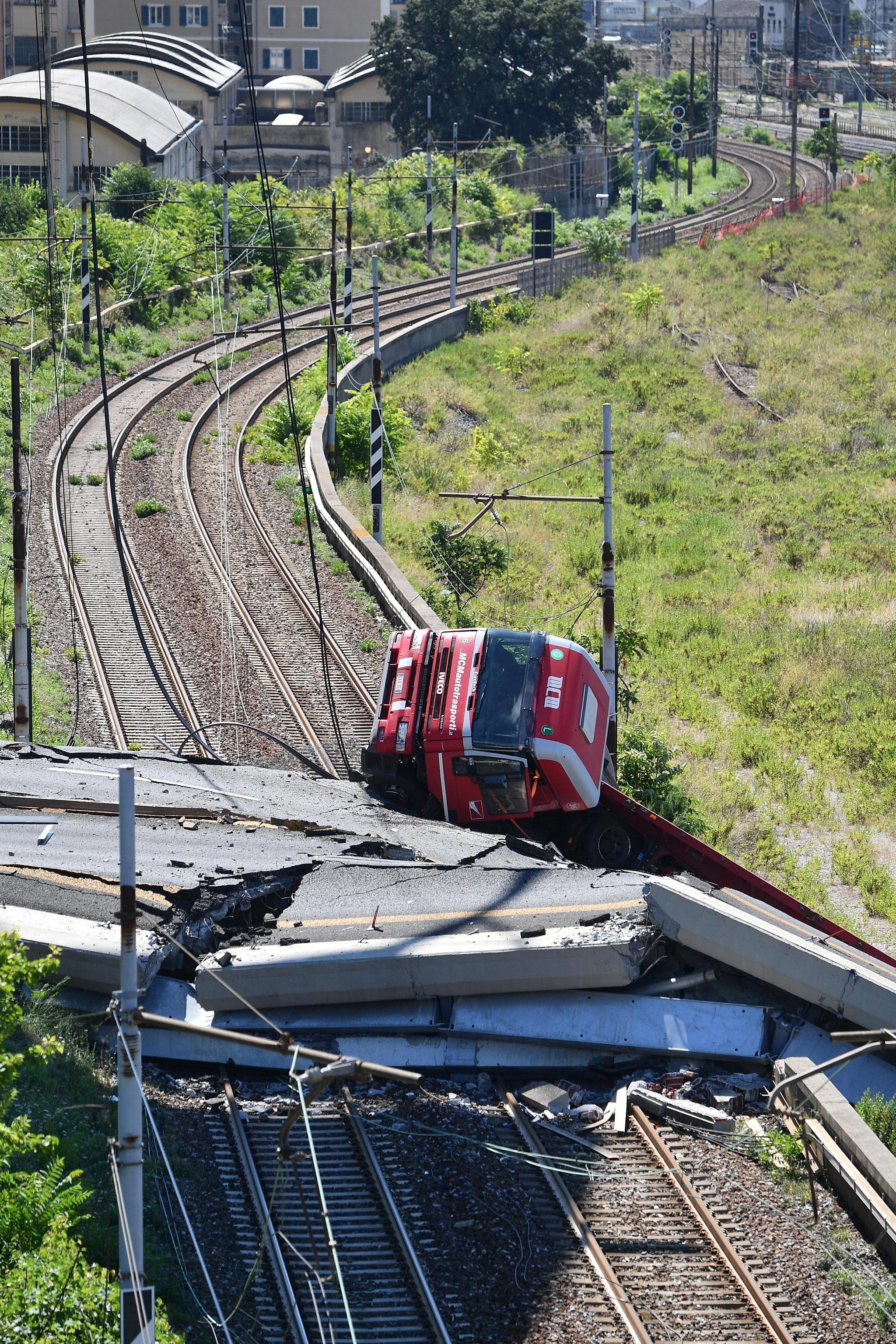 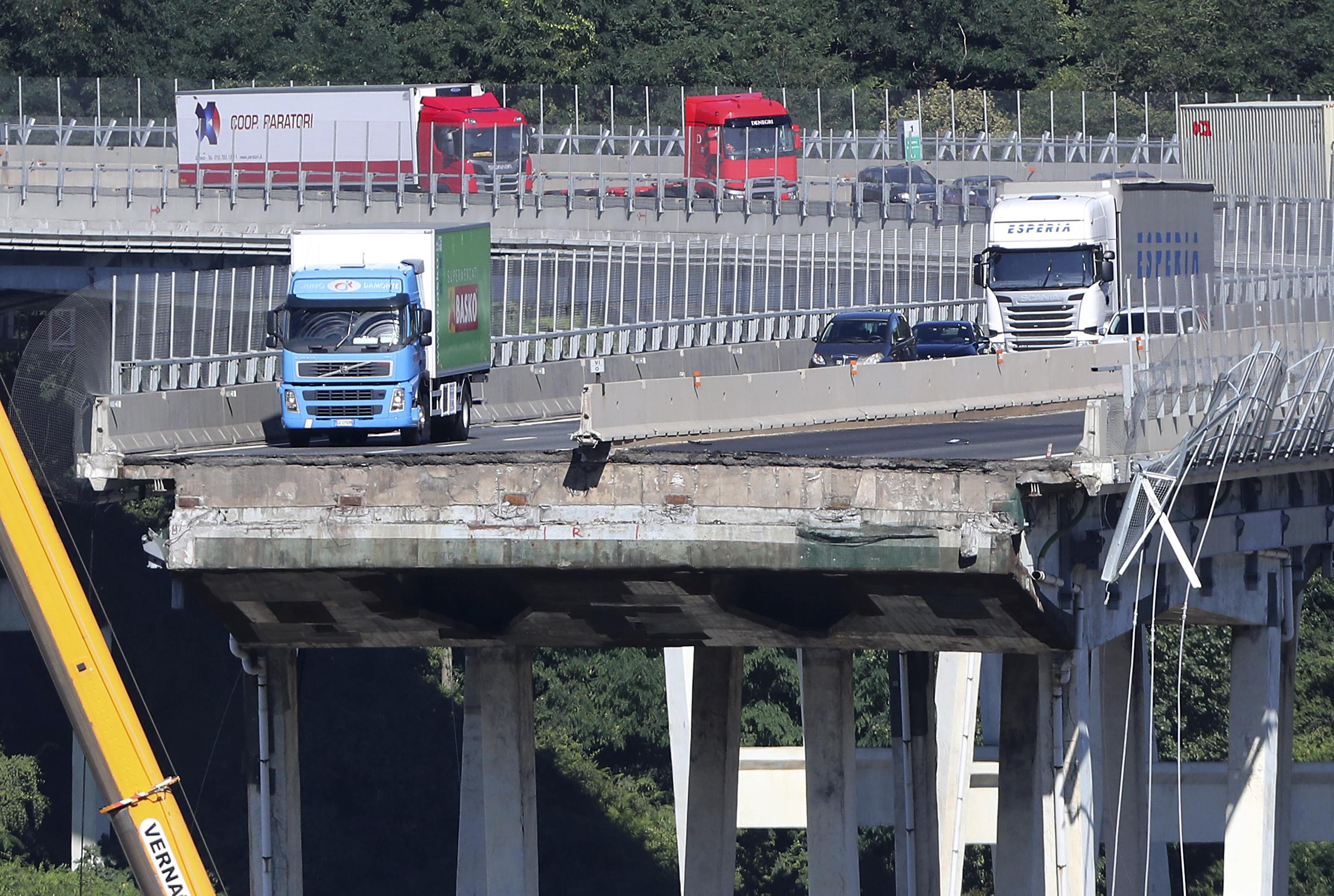 Italy’s populist government has now blamed the private company that manages the bridge of putting profits before safety.

"It's not possible that someone pays a toll to die," he said. "Those who were supposed to do the maintenance work did not do it properly.

"That bridge should have been closed before this tragedy happened.

"The profits that these companies make as monopolies anger many people … a lot of money should have been invested in security, but instead it went towards dividends." 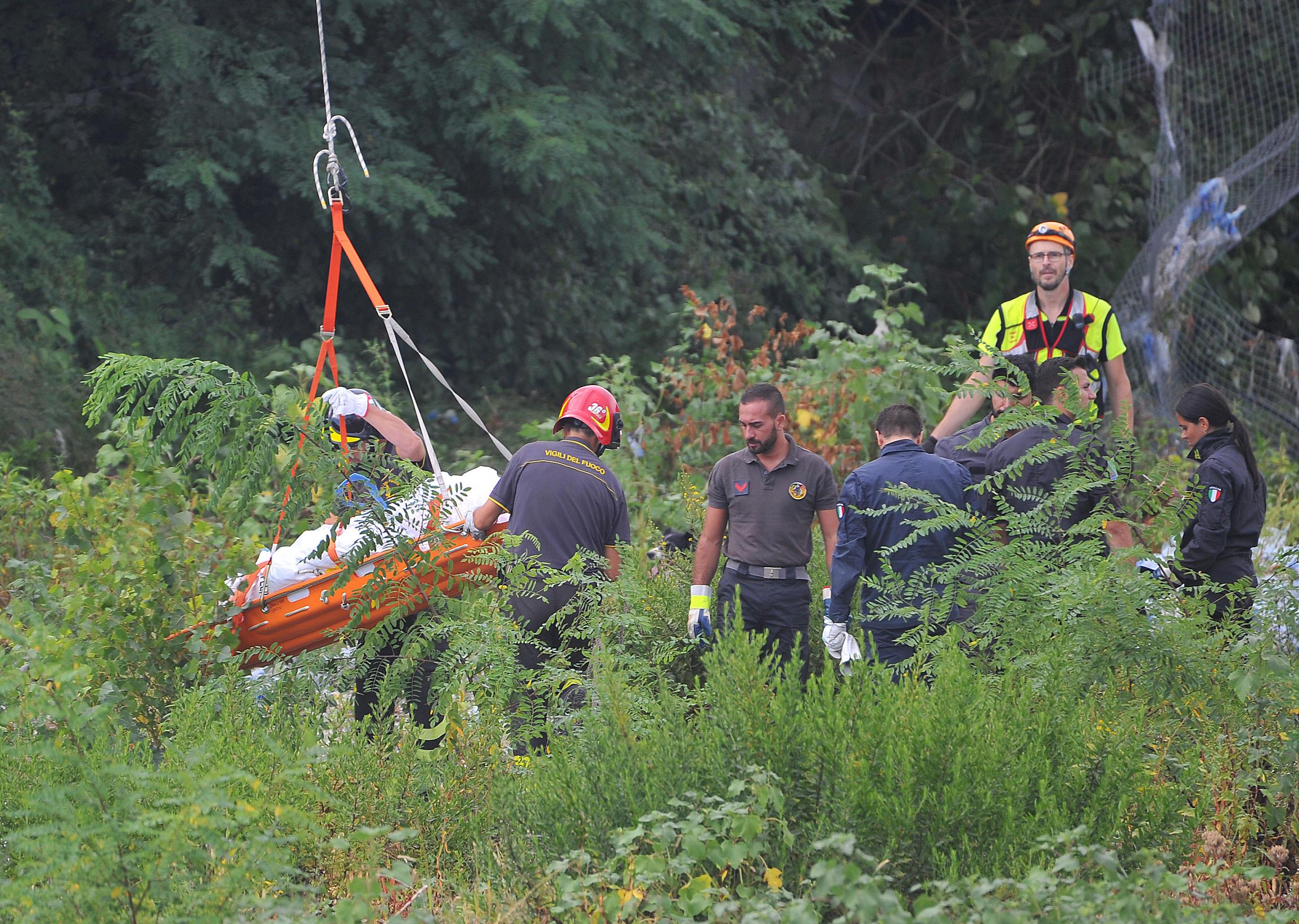 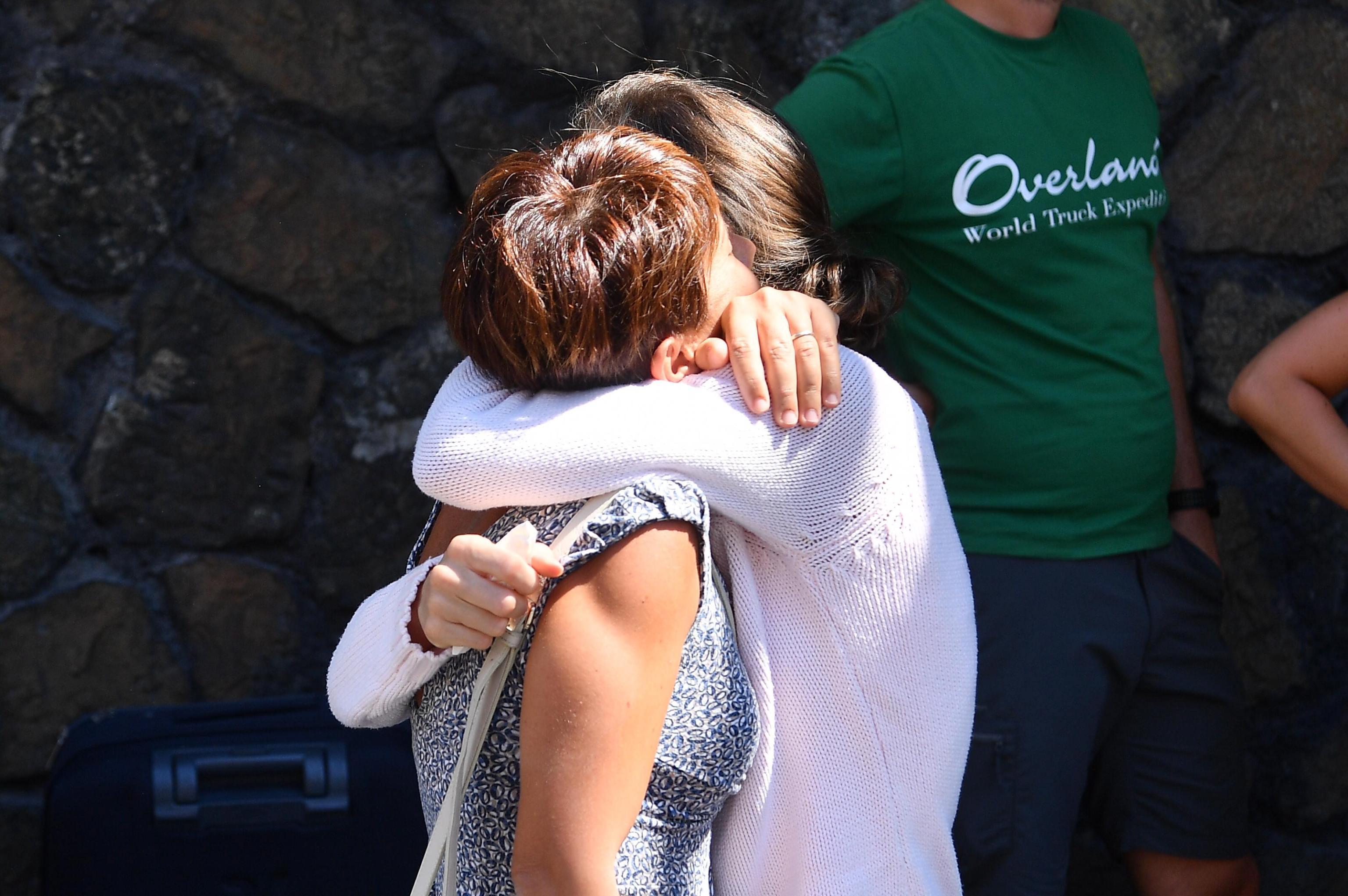 The government said it now wants to revoke the contract awarded to Autostrade while hitting the company with a 150m euro fine.

However, Autostrade -which operates nearly 2,000 miles of Italian motorways and is controlled by the Benetton group – hit back at claims it had not spent enough on maintenance.

"In the last five years the company's investment in the security, maintenance and strengthening of the network has been over one billion euros a year," it said.

a, Airport, And, at, Bridges, collapsing, Experts, from, hundreds, including, Italian, Major, More, of, risk, Rome, route, tourist, tunnels, warn
You may also like: