Selangor: Malaysia's deputy opposition leader, Wan Azizah, has predicted a hung parliament after the country's May 9 election, as messages about the alleged corruption of the current Prime Minister Najib Razak start to hit home.

In an exclusive interview with Fairfax Media, Azizah has suggested that Najib and his Barisan Nasional ruling coalition – which has effectively ruled the country continuously since 1957 – is in the fight of its political life.

"It is expected that he is going to cheat, and do a lot of things to steal the election," she warned. 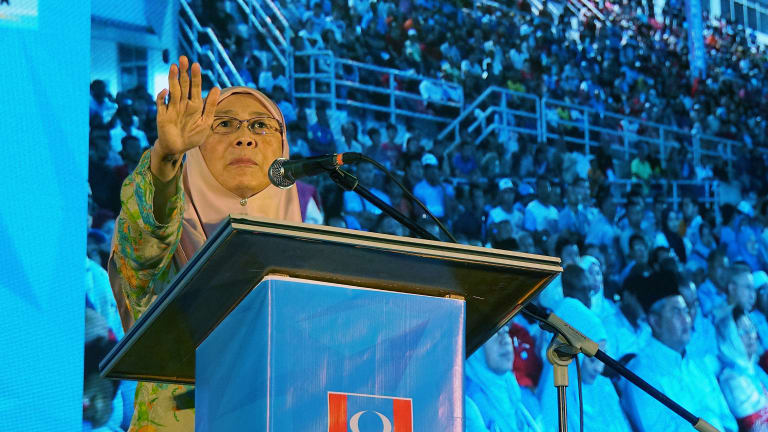 Close to 10,000 Malaysians turned out for a rally of the Pakatan Harapan (Pact of Hope) opposition parties at the stadium Kuala Selangor, about an hour and a half from Kuala Lumpur, on Monday evening.

Former prime minister Mahathir Mohamad, who ruled the country for 22 years until 2003 and who is now the opposition's candidate for prime minister, and half a dozen other opposition MPs spoke at the rally.

All hit the same key points, again and again, during the nearly-three hour event. They criticised Najib's government over the 1Malaysia Development Berhad (1MDB) scandal, outlined plans to reduce the cost of living for ordinary Malaysians through a cut to the goods and services tax, and promised to govern for all Malaysians – ethnic Malays, Chinese and Indians.

Najib has been dogged by allegations of corruption relating to the state-owned company 1MDB – which he helped establish and which is supposed to foster investment. The US Department of Justice has alleged he received $US681 million ($889 million) in stolen money from the fund, a claim the Prime Minister has denied.

Azizah said that it had been difficult for the opposition to explain the 1MDB scandal to ordinary voters, given the complexity of the allegations, but the message was beginning to cut through.

"It is kind of difficult for the ordinary Malaysian on the street. But when you say because of it we have to pay off a national debt, then, OK, they make the link and that’s what we are banking on," she said, speaking after the rally.

"The cost of living, the GST, has made [people’s] lives poorer and more difficult. That’s the main cause for concern and why people will vote for the opposition.

"At the moment, he [Najib] is fighting for his life. It is expected that he is going to cheat, and do a lot of things to steal the election, but I think it will be a hung parliament." 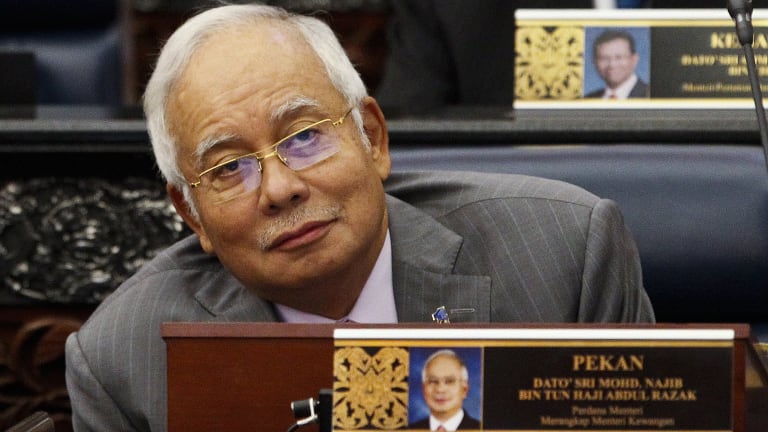 In the lead up to the election being called, the government passed a "fake news" law that critics argue is designed to shut down criticism over the 1MDB scandal. A re-drawing of electoral boundaries has also led to allegations of a gerrymander that favours the government.

Earlier on Monday evening, the 92-year-old Mahathir told the crowd that Najib – the man who was once his political protege – was "not a prime minister like his father was" and that "he thinks with money he can do as he wants".

"But people are not interested in just money. They want the country to be ruled well," he said.

The Malaysia editor of the Australian National University's New Mandala website, Kean Wong, told Fairfax Media the opposition was pursuing a strategy of winning up to 100 seats on Peninsula Malaysia, where about 80 per cent of the country's 31 million people live. 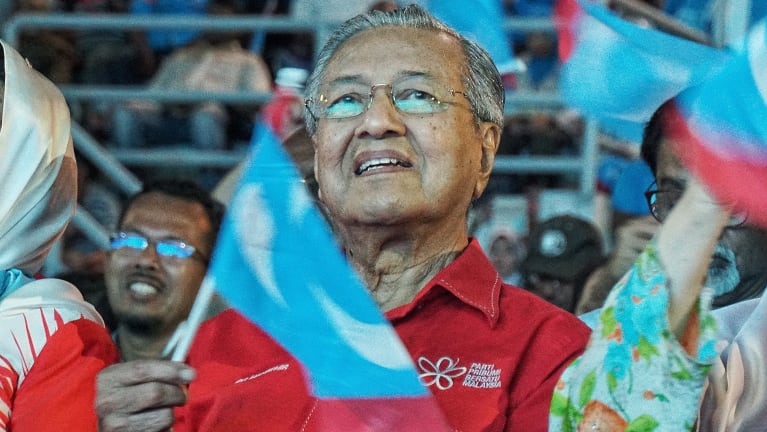 If the opposition can secure close to that 100-seat figure then a hung parliament was plausible, Wong said, but victory for the government was still the most likely outcome.

Azizah said that, in the event of a hung parliament, the opposition would try to woo MPs from eastern Malaysia who are not part of the opposition coalition to reach the minimum 112 seat majority needed in the 222 member lower house to form government.

And according to Wong, "Things are tracking well for the opposition at this stage.

"The mid-week polling day [the election is on a Wednesday, which could suppress voter turn out] has caused a backlash which has surprised many people in the Barisan Nasional [ruling] coalition … It’s one of those mis-steps that may seem a bit banal, but it adds to the perception of a ruling coalition that is a bit disconnected from people’s reality.

"But I’m not sure they [the opposition] should be so confident about winning power. As everyone knows, a week is a long time in politics. People on the ground are telling me that things are not going well for Najib. But a lot can still happen."