Follow
Home » World News » Ian Warden: The peachiest word of them all

Ian Warden: The peachiest word of them all

Like bright daffodils appearing in a spring meadow after a long winter, suddenly the hope-bringing “i” word, impeachment, is blooming everywhere. It is decorating commentators’ discussions of Donald Trump.

So for example, just hours after Trump’s slavish scratching of Vladimir Putin’s back in Helsinki, the online American Prospect thundered “Trump's mission to Finland is a political catastrophe for him. 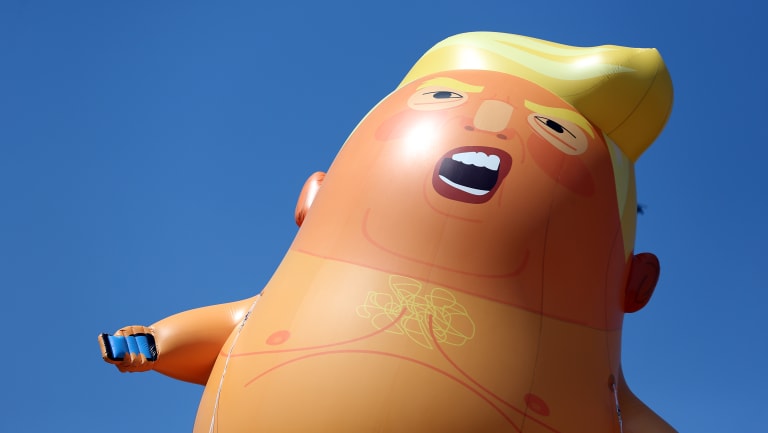 How irksome it has been, having to pay suspenseful attention to the goings on of a mediocre man.

“It caps his buffoonish performances at NATO and in Britain.

“There is no good explanation for any of it, except a psychiatric one. Impeachment just became inevitable.”

Quickly! While there is still time, in these few weeks left of his surreal presidency, let us each decide what it is that has been most loathsome about his reign.

What your columnist has loathed most has been the sheer unavoidability of daily news about what Trump has been saying and doing.

I call it unavoidable because, however easy it is to ignore so much of everyday news and current affairs and comment, this particular buffoon is somehow (unless it is just a nightmare we will wake from) the president of the United States. What he does may have consequences for all mankind.

But how irksome it has been, having to pay suspenseful attention to the goings on of a mediocre man. In almost everything else in life we filter out all that’s garbage.

I, for example, choose never to read the Daily Telegraph, to listen to radio shock jocks or to watch Sunrise. To have to pay breathless attention to everything about Donald Trump feels as tiresome as it would to have to follow, study and care about everything gibbered by, say, Alan Jones, Andrew Bolt, by a parrot, by the national president of the Young Liberals, by anyone of no consequence and no interest.

We, the discerning, expect those we pay attention to be at least quite good at something. But Trump, a scatterbrain and a flibbertigibbet isn’t competent at anything. Even his lying (and at his most recent rally the fact checkers of The Washington Post counted him making 98 statements of fact, 76 per cent of which were false, misleading or unsupported by evidence) lacks purpose and consistency and is just a dog’s breakfast of gibbered fibbing.

His presidential ignorance of how to do anything effectively presidential is as if someone unable to read music had been made conductor of the Canberra Symphony Orchestra.

Trump is a kind of Archbishop of Canterbury who has never read the Bible.

In Gilbert and Sullivan’s satirical masterpiece HMS Pinafore, a blue-blooded ponce, Sir Joseph Porter KCB, rises to become First Lord of the Admiralty even though (fearing seasickness) he has never set foot aboard a vessel of any kind. Those of us who are Savoyards (G&S devotees) see and hear Sir Joseph (albeit a vulgar and malevolent and not a bit amusing version of him) in all of Trump’s ignorant clodhoppings. Trump has somehow become US president without having a presidential instinct or any moral-intellectual presidential qualifications.

I am writing this late on Tuesday, after Trump’s Helsinki debacle. I’ve spent the day following intelligent journalists and other savvy commentators discussing and analysing in depth a man who is their intellectual inferior. They all have bigger and better vocabularies and brains than his. None of them, though condemned to analyse a man with so tiny a mind, would ever dream of hiring him to walk their dog. For he, incompetent Trump, would surely either lose Rex or inadvertently poison him by feeding him Trump’s favourite fast foods including Trump’s all-time favourite dessert, chocolate cream pie.

Here beside me in my study I have an RSPCA mongrel, bless him, more complex, more deserving of all this analysis than Donald Trump is. But, alas, it is Trump (not Voss, my dog) who until golden dawn of Impeachment Day is somehow the Leader of the Free World and so must have all attention paid to him. It feels so wrong.

Meanwhile, gossip-loving Canberrans, do you find yourself gossiping about Donald Trump behind his back?

If so, shame on you. For, however tempting it is to gather round the water cooler and join the speculation about the swine (for example that Putin has famous “pee-tape” footage of Trump doing unhygienic things with Moscow prostitutes and that that’s why Trump daren’t criticise Putin) we know that gossip is a virulent and shameful thing.

But wait! Is gossip so shameful, after all? There is a liberating little essay Gossiping Is Good: The surprising virtues of talking behind people’s backs in the online July/August edition of The Atlantic. Ben Healy begins with an overview of the usual indictments of gossip, such as an Ann Landers’ advice that gossip is “the faceless demon that breaks hearts and ruins careers”.

But then he gives a short, witty, footnote-rich overview of university research and scholarly thinking that gives gossip a glowing report.

For example, he finds that evolutionary psychologists fancy that idle chatter with and about others gave early humans a sense of shared identity.

Best of all, giving us all a feel-good licence to gossip about Trump, about the boss, about the Young Liberals, about anyone, Beal reports “Researchers at the University of Texas found that if two people share negative feelings about a third person, they are likely to feel closer to each other than they would if they both felt positively about him or her.”

All, Ian, of, peachiest, the, Them, Warden:, word
You may also like: