‘If you want me to die, pray harder’: Motorcycle-riding Duterte taunts critics

Singapore: After days of speculation that he was dead, Philippine President Rodrigo Duterte has emerged in public for the first time in a fortnight, taunting his detractors by declaring: “If you want me to die early, you must pray harder.”

As the nation of 108 million people battled crises on two fronts over the last two weeks – a steep rise in COVID-19 cases and a maritime dispute with China – the 76-year-old leader had not been sighted, taking a week off for Holy Week at the start of April and then cancelling a pair of public addresses he was due to give over the seven days that followed.

Duterte’s absence from public view gave rise to suggestions of fading health – a subject that has regularly been a point of discussion since he took office in 2016 – and that he had been flown by air ambulance to Singapore for emergency treatment. It was also rumoured that he was dead. 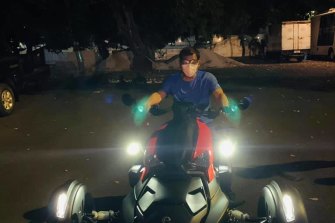 Rodrigo Duterte is shown riding a motorcycle late at night within the presidential compound in Manila on Sunday.

“I don’t see anything wrong with riding a motorcycle at 2am. I’m not taking the people’s time,” he said.

It is not the first time speculation has swirled in the Philippines about Duterte’s declining health. Last August he denied claims he had been flown to Singapore for medical treatment.

He admits suffering from a range of medical issues such daily migraines and Buerger’s Disease, which involves the swelling of blood vessels, ailments that have led critics to question his fitness to lead. They even prompted a lawyer to last year attempt to have the Supreme Court compel Duterte to disclose his health records, but it was dismissed.

His six-year term comes to an end next year and while he can not run for re-election as President under the constitution, he could stand as vice-president while his daughter Sarah, the mayor of Davao City, has been mentioned as a possible candidate to succeed him in the top job. 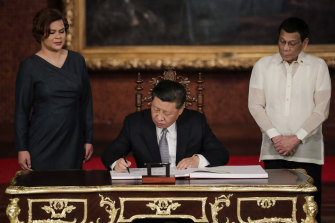 Daughter Sarah Duterte, seen here on right with Chinese President Xi Jinping and her father President Rodirgo Duterte at the Malacanang Palace in 2019, has been talked about as a possible successor.Credit:EPA/AP

For now, however, Duterte’s political future beyond 2022 is taking a back seat to the Philippines’ efforts to handle the second worst COVID-19 outbreak in south-east Asia behind Indonesia.

The country’s Department of Health said there had been 11,378 new cases of the virus on Monday, the fourth day in succession additional positives have exceeded 10,000, while the death toll rose to 15,149.

Despite the climbing numbers the Duterte government on Sunday eased some of the restrictions on metropolitan Manila and other districts surrounding the capital which are home to more than 25 million people.

The Philippines has not only been reeling from a sudden upswing in cases over the past month but like Indonesia faces delays in the rollout of vaccines due to supply problems.

The government, which hopes to inoculate up to 70 million people this year, has so far only received about three million of the 20 million doses of CoronaVac it has bought from Sinovac Biotech in China.

That forms the bulk of the vaccine resources available in the Philippines so far and health organisations are now urging Joe Biden’s United States administration to assist in fast-tracking the delivery of some of the 20 million doses of Moderna it has also purchased.

The vaccine shortfall comes amid outrage in recent weeks over the appearance of suspected Chinese maritime militia boats at a reef in the Spratly Islands that has been seen in Manila as a threat to Philippine sovereignty.

The country’s defence and foreign secretaries have been vocal in demanding the Chinese vessels leave but the president and his spokesman have been more restrained in their response and have been slammed by critics for cosying up to China while the superpower furthers its ambitions at sea.

As one opinion columnist noted before Duterte’s latest televised speech: “Filipinos need their leaders to be more than just alive.”