Illinois is poised to become the 11th state in the U.S. to legalize marijuana for recreational use, after lawmakers voted to legalize the drug on Friday afternoon.

The Illinois House passed HB 1438, 66-47, after it went through the Senate on Wednesday. The final hurdle will be sending the bill to Democratic Gov. J.B. Pritzker, who campaigned on the issue and is expected to sign off on it.

According to Bloomberg, HB 1438 would allow Illinois residents 21 and older to carry up to 30 grams of marijuana, and those who use the drug for medical reasons would be able to grow it in the privacy of their home. Recreational users would still be forbidden to grow the drug; nonresidents could possess up to 15 grams without prosecution.

DON'T BE FOOLED – MARIJUANA LEGALIZATION IS NOT ABOUT ADVANCING SOCIAL JUSTICE 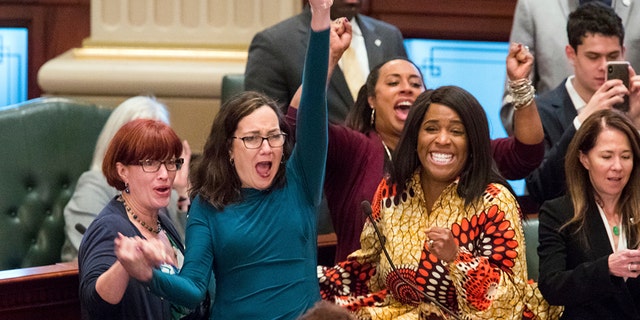 Illinois state Rep. Kelly Cassidy, D-Chicago, throws her fist in the air as she celebrates with Illinois state Senator Heather Steans, D-Chicago, left, and Rep. Jehan Gordon-Booth, D-Peoria, as they watch the final votes come in for their bill to legalize recreational marijuana use in the Illinois House chambers Friday, May 31, 2019. The 66-47 vote sends the bill to Gov. J.B. Pritzker who indicated he will sign it. (Ted Schurter/The State Journal-Register via AP)
(illinois marijuana AP)

"It is time to hit the 'reset' button on the War on Drugs," the proposal's sponsor, Chicago Democratic Rep. Kelly Cassidy, said. "We have an opportunity today to set the gold standard for a regulated market that centers on equity and repair."

The money from legalization will help the cash-strapped state, which according to Bloomberg is facing chronic budget shortfalls, $7 billion in unpaid bills and state pension funds that are short $134 billion.

Pritzker supported legalization during his campaign, suggesting the industry would produce up to $1 billion annually in state tax revenue. He also says the legislation would free police to enforce more serious crimes and give those convicted a second chance at life.

Opponents of the bill worry that legalizing marijuana would send the state in the wrong direction.

"No matter how you package this, whether it's revenue, or it's criminal justice reform, or it's just saying that people are smoking it anyway, so just give up, I can pretty much guarantee you where we're going to be in 10 years .. and it's not going to be good," Democratic Rep. Anthony DeLuca of Chicago Heights told Bloomberg.

illinois, legalize, poised, re, to
You may also like: