A unique cinematic challenge is found at the heart of I Feel Pretty: the audience is tasked with creating a version of the main character, played by Amy Schumer, which — in their minds — better conforms to society’s restrictive beauty standards.

It’s not an unprecedented concept; the 2001 comedy Shallow Hal centers on a man who falls in love with a 300-pound woman who, after he’s put under a spell, he sees as a skinny Gwyneth Paltrow. But I Feel Pretty never reveals the imaginary, more “beautiful” version of Schumer’s Renee Bennett. Instead, the actress provides clues as to what her character might be seeing in the mirror, after her wish to become “undeniably pretty” is suddenly granted when she falls on her head during a SoulCycle class.

As if having shed a coat, she pulls at her stomach, marveling at how it must have become tighter; she presses her thighs, arms, and face as if she’s examining dramatic weight loss. Through these actions, viewers determine what Schumer may look like if she were more similar to the typical lead actress in a major film: perhaps she’d be skinnier, or have fuller lips; instead of filling out her exercise gear, she’d have the envy of all thigh gaps; her skin would illuminate that Hollywood glow that only A-list celebrities somehow manage to obtain.

It’s a rarity in film and media not to be presented with the ideal version of beauty, but the practice of imagining what perfection might look like is a familiar undertaking for all. In one pivotal moment, Schumer stares at herself in the mirror with disdain, just as the vast majority of audiences have also done as they’ve struggled with internal contempt for their own appearance.

Everyone has thought about what they may look like if they could have hair that’s just a little bit softer, for example, or the perfect eyes that are shaped like almonds, or a face that would make any head turn. By performing this critical-thinking process on Schumer, we realize just how oppressive our expectations and demands are, especially for women. 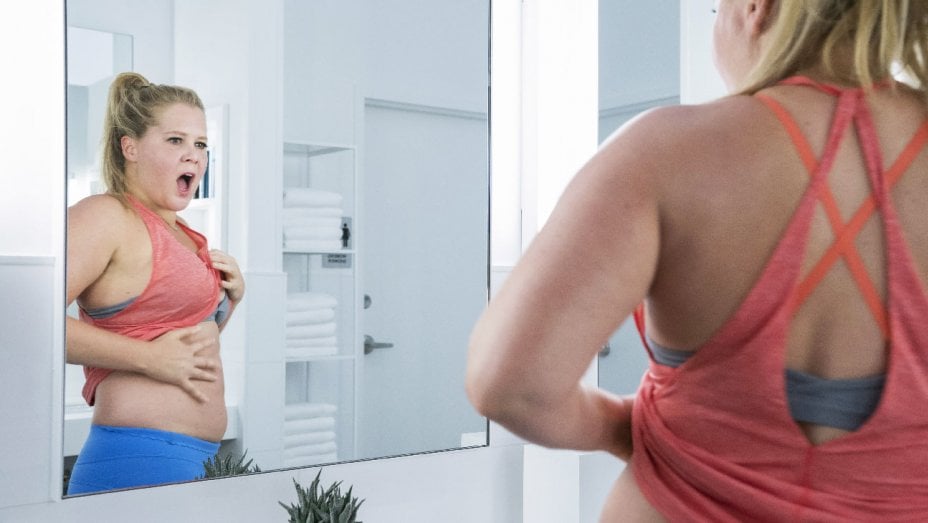 Upon its release, the new movie faced backlash over the comedian’s casting, with critics saying the main character should have been played by someone other than a white female. There’s certainly a larger point to be made about the total lack of representation in Hollywood — 73 percent of film actors are white, according to a 2014 study. But that criticism shouldn’t necessarily overshadow one of the most important points made in I Feel Pretty: the fact that someone like Schumer — a decorated Hollywood starlet and a conventionally attractive white cis-female — faces the same body dysmorphia as women and men of all colors and sizes, a fact that is in itself reflective of just how restrictive and exclusionary beauty ideals are.

Schumer’s character checks off nearly every box in society’s list of beauty expectations; despite working in a lonely Chinatown basement, she spends hours working on her hair and makeup each day. She shouldn’t feel anything less than beautiful, yet thinks she’s underwhelming compared to her female colleagues working at the headquarters of the high-end fashion brand she works for. The course of her entire life changes, however, when she begins to see an entirely different appearance when looking at herself in the mirror. She goes from working as an online service representative to serving in the coveted receptionist position, later climbing the corporate ladder to the role of vice president for a diffusion line marketed toward typical middle-class consumers.

Nobody else sees Bennett any differently than she appeared before the injury, though: it’s her confidence that propels her to unlimited opportunities in both her professional life as well as her love life, since she no longer has any of the inhibitions that come with self-doubt and body issues.

Bennett’s character is the culmination of years of self-deprecating comedy Schumer has employed in her career; her stand-up involves frequent acknowledgment that while she may be beautiful, she’s not the typical sunken-in face one might see on the cover of a magazine, or walking down South Beach. “In New York, I’m like a six — seven with all the padding,” Schumer has joked. “But in Miami I was like a negative three. People were like, ‘What the fuck is that?’ Throwing up on their motorized wheelchairs. Children were crying. I was like, ‘Beyoncé calls it jelly?’ They were like, ‘That’s cottage cheese, bitch. Do some lunges.'”

In one of her most memorable speeches, Schumer advocated for women accepting themselves exactly as they were, while receiving Glamour‘s Trailblazer award in 2015. “I’m probably, like, 160 pounds right now, and I can catch a dick whenever I want,” she said. “I’m not going to apologize for who I am, and I’m going to actually love the skin that I’m in. And I’m not going to be striving for some other version of myself.”

It’s that exact confidence Bennett displays in I Feel Pretty once she sees herself as absolutely flawless: she spontaneously joins a bikini contest (and doesn’t second-guess herself after losing), demands to be valued and respected in the workplace, and even has sex with the lights on so she can look at herself in the mirror — a move that greatly turns on her newfound love interest, played by Rory Scovel. In the end, she realizes there was no magical transformation in her appearance. Believing she was beautiful was enough for her to reach her full potential.

I Feel Pretty delivers a powerful message about kindness, both to oneself and others. Schumer’s candid journey of self-acceptance throughout her years in the spotlight makes her an obvious-yet-refreshing choice to star in the film. And at a time when most forms of media are telling us we’re all less than perfect, it’s nice to see a project in which the sole purpose is to remind us that everyone deserves to love themselves.