Washington: US President Donald Trump has defended his controversial proposal to accept the Republican Party's presidential nomination with a speech from the White House, saying it would save taxpayers' money.

Several Republicans have expressed concerns about the legality of the idea, while Democratic Speaker Nancy Pelosi said the prospect of staging such a party-political event at the White House should be "rejected right out of hand". 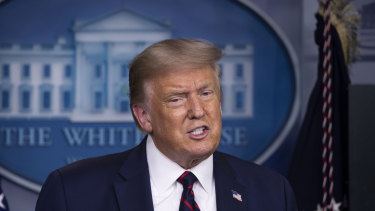 Donald Trump said he would “probably” give his acceptance speech at the White House. Credit:AP

Trump's advisers have been searching for a suitable location for the president to deliver his acceptance speech after the President scrapped plans to hold the Republican National Convention in Jacksonville, Florida, because of a coronavirus flare-up in that state.

The Republican and Democratic conventions represent the official start of election campaigning ahead of the November 3 election.

Democratic nominee Joe Biden on Wednesday (Thursday AEST) announced that he would not travel to Milwaukee, Wisconsin – where his party's nominating convention will be held in two weeks – because of coronavirus concerns.

Earlier in the day Trump said he would "probably" deliver his acceptance speech live from the White House on August 27, describing his official residence as a "beautiful alternative" to a packed arena. 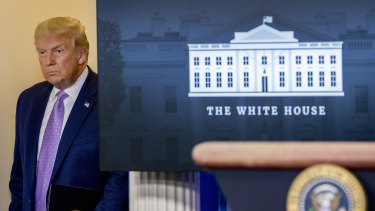 US President Donald Trump arrives for a briefing in the James Brady Press Briefing Room of the White House.Credit:AP

"It would be the easiest from the standpoint of security," Trump said on Fox News. "We’re thinking about doing it from the White House because there’s no movement and it’s easy."

Speaking later at a press briefing, Trump said a White House speech would be the most "cost-conscious" option for taxpayers as it would save "tremendous amounts" of money on travel.

House Speaker Nancy Pelosi said: "For the President of the United States to degrade once again the White House, as he has done over and over again, by saying he's going to completely politicise it, is something that should be rejected right out of hand.

She continued: "It's not serious thinking. 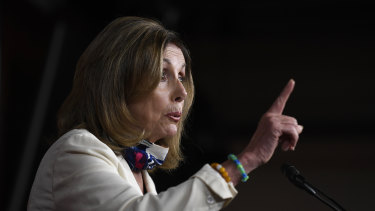 "It won't happen, whether it's legally wrong or ethically out of the question, it shouldn't have been something that was expressed."

Told about the idea, John Thune, the Republican Party's Senate whip, said: "Is that even legal?"

"I assume that’s not something that you could do. I assume there’s some Hatch Act issues or something," he said, referring to a federal law that prohibits federal employees from engaging in party-political activities in government buildings.

The Hatch Act does not apply to the president, but ethics experts have said holding the speech at the White House would force other employees to do so.

Trump has also reportedly considered giving his speech from other high-profile locations such as the Gettysburg battlefield, the Liberty Bell in Philadelphia or Mount Rushmore.

Instead of Milwaukee, Biden will instead deliver his speech from his home in Delaware as the Democratic National Committee cuts back on virtually all convention-related travel.

"We followed the science, listened to doctors and public health experts, and we continued making adjustments to our plans in order to protect lives," DNC Chairman Tom Perez said in a statement.

"That’s the kind of steady and responsible leadership America deserves. And that’s the leadership Joe Biden will bring to the White House."

assault, Fresh, in, norms, on, Tru
You may also like: