Increase in wages a first step towards economic reform in Cuba

Havana:  The Cuban government is raising state salaries as part of a broader package of economic reforms.

A salary increase has long been seen as one of the first steps in the unification of Cuba's unique dual-currency system, a process that could be a risky gambit in the face of an economic crisis exacerbated by tightened US sanctions. 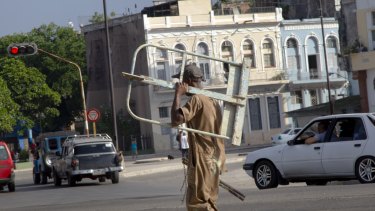 A worker carries scaffolding as he walks to a job in Havana. State employees are set to have a wage rise, part of upcoming economic reforms.Credit:AP

"A meeting of the Council of Ministers approved economic measures to overcome the current situation, and an increase in the state sector," Diaz-Canel wrote on Twitter on Thursday evening.

The collapse of Venezuela's economy has led to a cut in aid to Cuba, and sharp slowdown worsened by a series of Trump administration measures designed to cut off funding to the island's government. 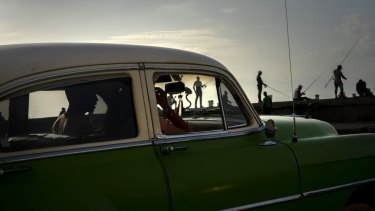 A couple in a classic American car drive along the Malecon seawall past fishermen at sunset in Havana, Cuba.Credit:AP

"A meeting of the Council of Ministers approved economic measures to overcome the current situation, and an increase in the state sector," Diaz-Canel wrote on Twitter on Thursday evening.

The announcement later read on state television said that the minimum salary would be nearly $US17 ($24) a month while the average salary would increase from $US32 to $US44 ($62).

When a state-run newspaper tweeted that a wide-ranging salary reform had been approved, the President quickly responded that, "this is an incremental salary increase. Next comes the reform."

The announcement later read on state television said that the minimum salary would be nearly $US17 ($24) a month while the average salary would increase from $US32 to $US44.

The announcement made repeated references to a variety of measures approved by the council, but said only that, "in coming days, our population will receive more detailed information about the extent of the reforms through various media."

For the last quarter-century, Cubans have used one peso worth about four US cents and another worth nearly a dollar. The stronger peso was introduced as a replacement for the dollars traded on the black market during the island's post- Soviet economic crisis in the 1990s. Over time, the two currencies have come to be used by the communist government to set extremely low prices for goods and services considered basic rights and extremely high prices for others considered luxuries, creating distortions that cripple economic growth.

The special rate also incentivises importing goods instead of producing them on the island, a major flaw in Cuba's stagnant economy and strained state budget.

Arturo Lopez-Levy, a visiting assistant professor of political science at Gustavus Adolphus College in Minnesota, US, called the announcement "a timid start to salary reform".

He said it could be part of an attempt to create more autonomy and incentives for increased production at state-run enterprises, whose operations have long been dictated by the central government.

Ending the dual-currency system is expected to lead to the eventual removal of subsidies and bankruptcy of dozens, even hundreds of state enterprises and the loss of many thousands of public sector jobs. With lower or no subsidies, state companies would be forced to raise prices. For that reason, a state salary increase has long been seen as a key precursor to monetary unification.

Meanwhile, New York City mayor and presidential candidate Bill de Blasio got into trouble when he shouted a Spanish slogan associated with Cuba's Communist revolution at a rally on Thursday.

The city is home to exiles who fled Fidel Castro's rule.

He later apologised on Twitter, saying he didn't understand the history and significance of the phrase "Hasta la Victoria, siempre!"

Fresh from his appearance in a Democratic debate in which candidates pointedly spoke Spanish to appeal to Hispanic voters, de Blasio went to Miami International Airport to join cargo workers in the heavily Hispanic city. They were striking over working conditions.

a, first, in, increase, step, wages
You may also like: