The death toll from freak storms that hit India climbed above 140 on Friday as people told how they had no time to escape the ferocious winds which tore down homes and toppled walls.

The overnight storms ravaged the territories of Uttar Pradesh and Rajasthan on Wednesday – leaving hordes of people homeless and many people trapped by debris.

More than 20 people were killed in a single village, Kheragarh, in the Agra district of Uttar Pradesh state, where a number of homes were knocked down by the storm.

Most of the victims were hit by falling walls and trees as powerful winds struck hundreds of towns and villages.

The dust clouds plunged swathes of north India into darkness as winds of more than 130 kilometres per hour.

Many people were sleeping as intense bursts of lightning destroyed their houses overnight as they became trapped inside.

Relief workers are battling to clear debris in affected areas and provide urgent medical care to those injured in the storms – amid warnings the storms are set to continue. A man stands near his demolished house on the outskirts of Agra, home to the Taj Mahal monument, on Friday morning 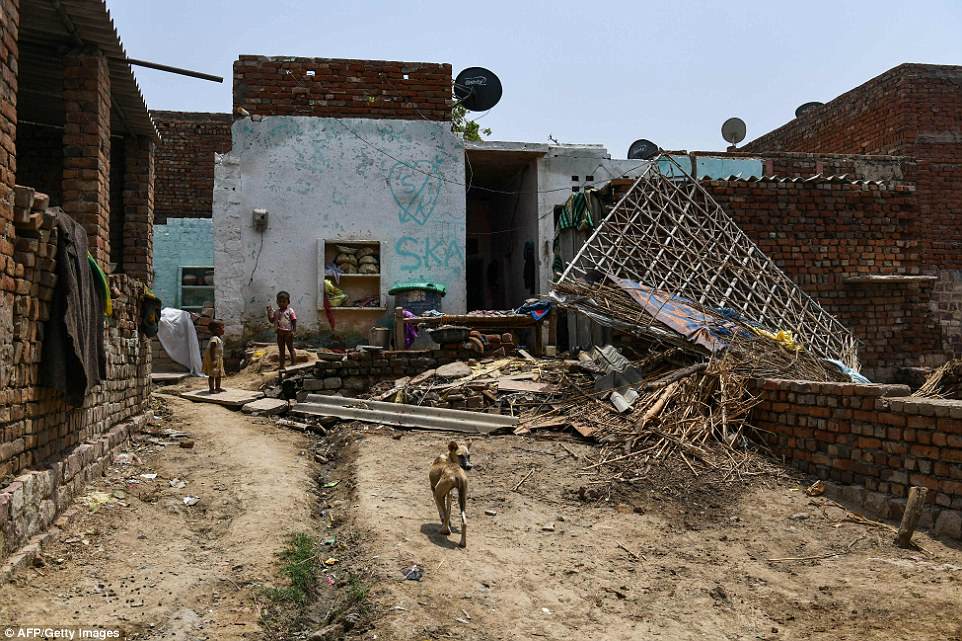 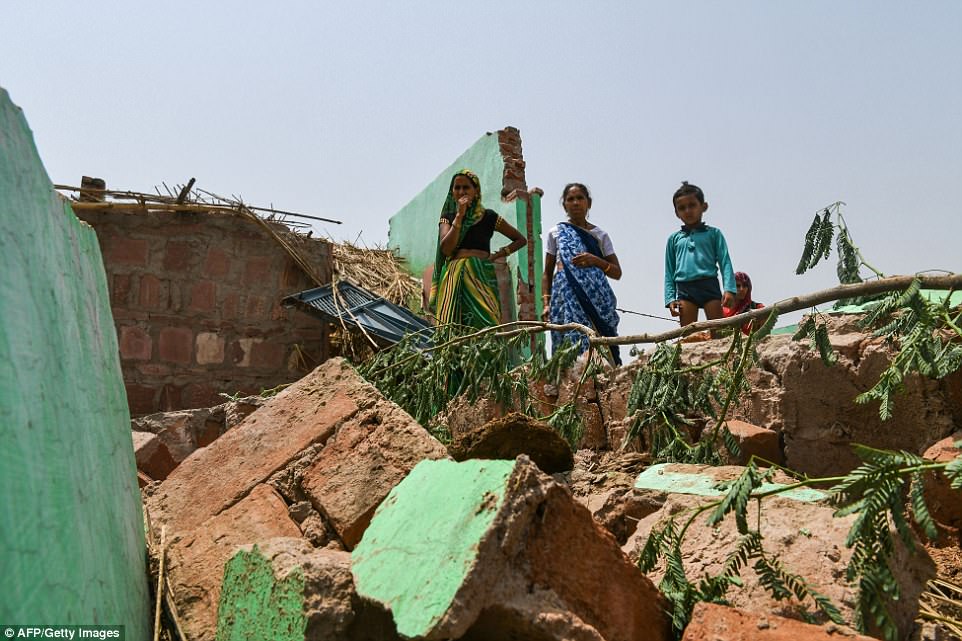 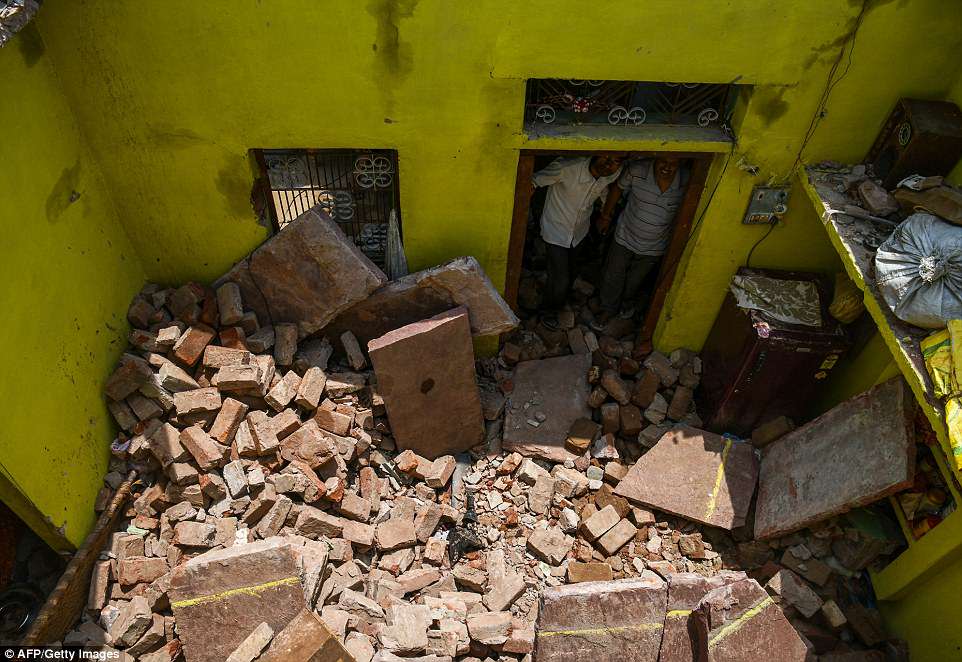 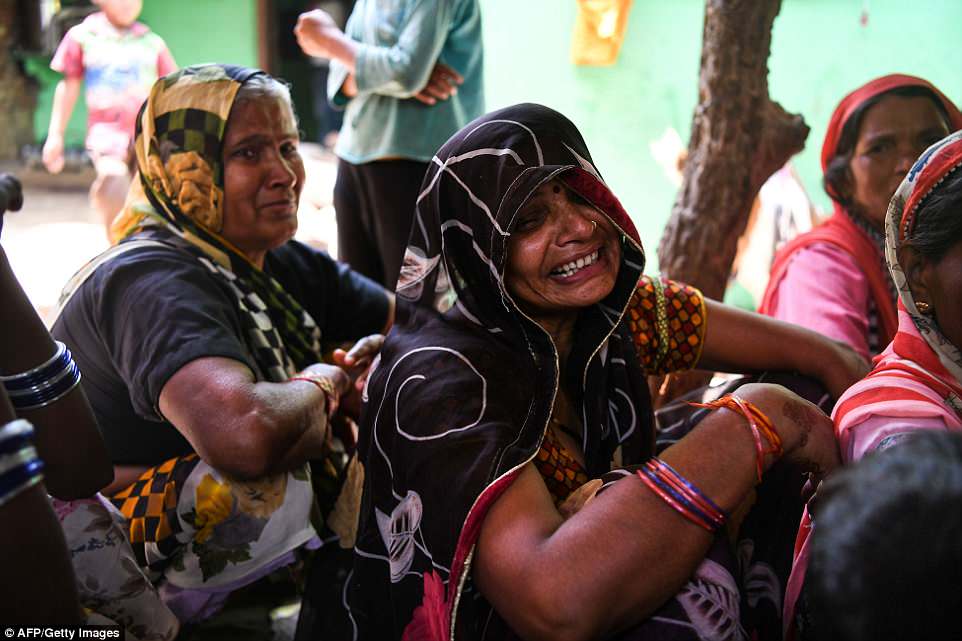 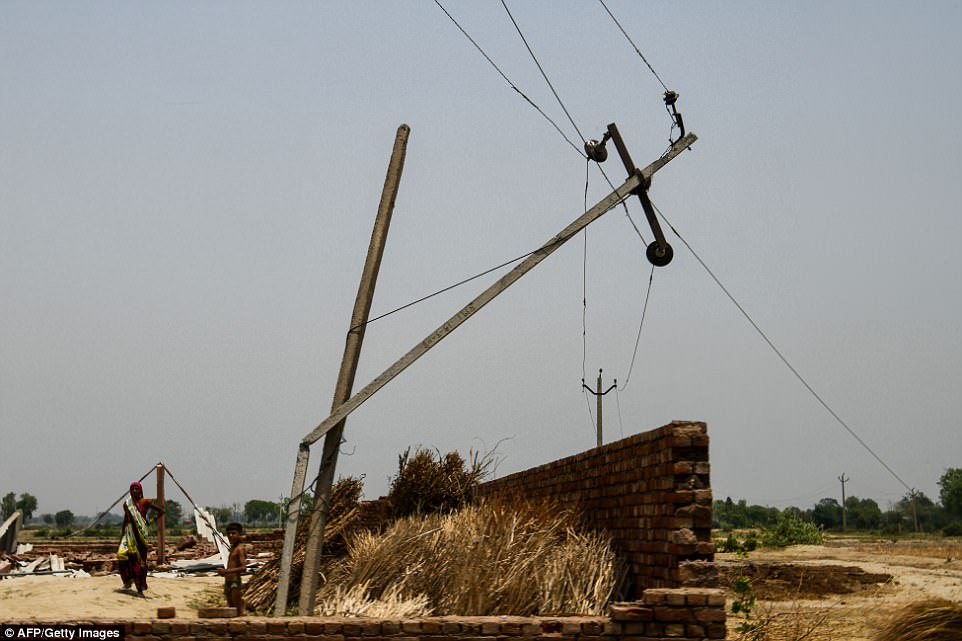 ‘We couldn’t sleep and were worried if the storm hits again. We took precautions and secured everything but nothing can stand up to nature’s fury,’ 40-year-old Agra resident Munna Lal Jha told AFP.

Ram Bhorosi told how his son and a nephew died when their house caved in as they welcomed people who had attended his daughter’s wedding.

‘We had guests at home and my son went inside the room to get a bed when the storm struck,’ he said.

‘A big stone crushed his head after the roof collapsed. His cousin was also caught under the crumbling roof. Half a dozen men helped us to clear the rubble to take out bodies. They didn’t get time to raise the alarm, it was so sudden.’

In nearby Burera village, Anil Kumar told of his narrow escape when their house fell.

‘We were sitting outside when the winds suddenly started raging. Four of us were crushed under the debris after the wall fell. My grandfather died but the others survived with injuries.’ 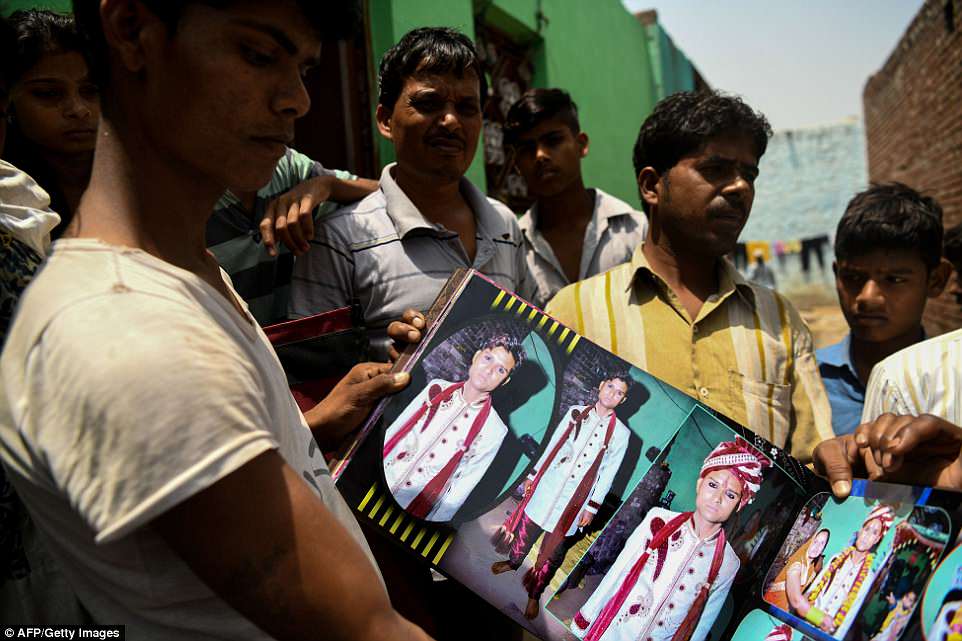 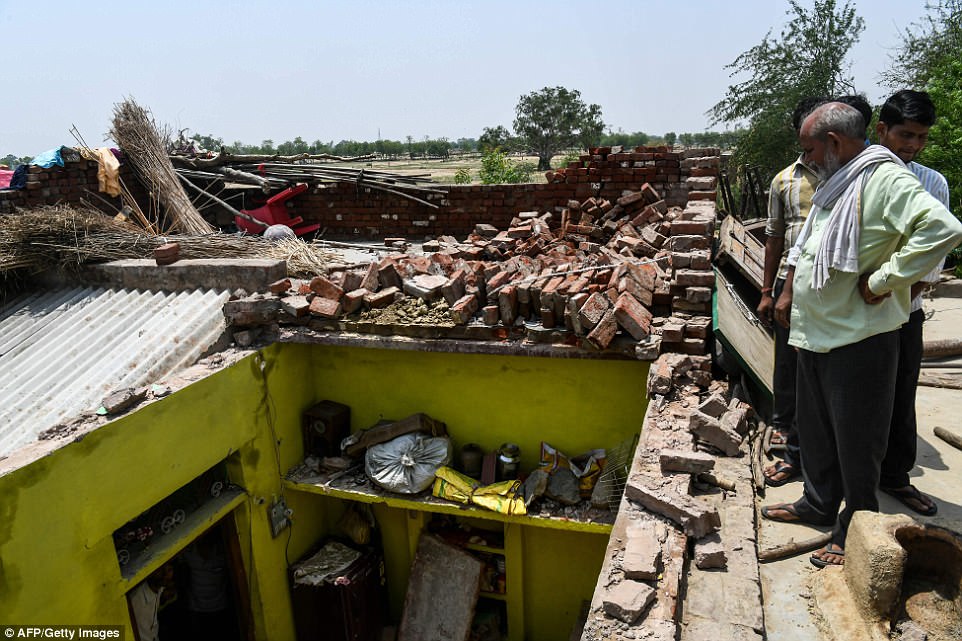 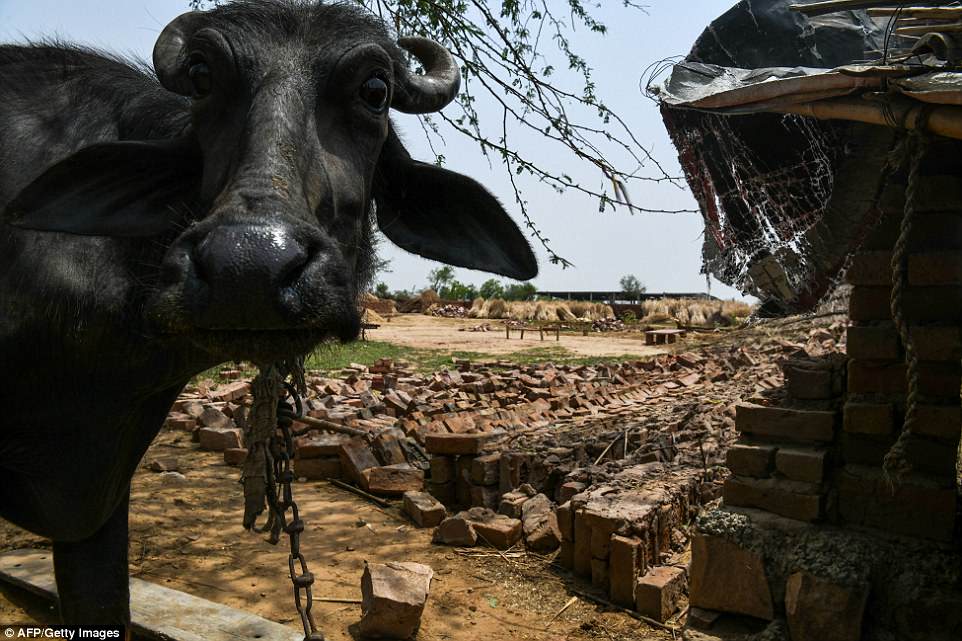 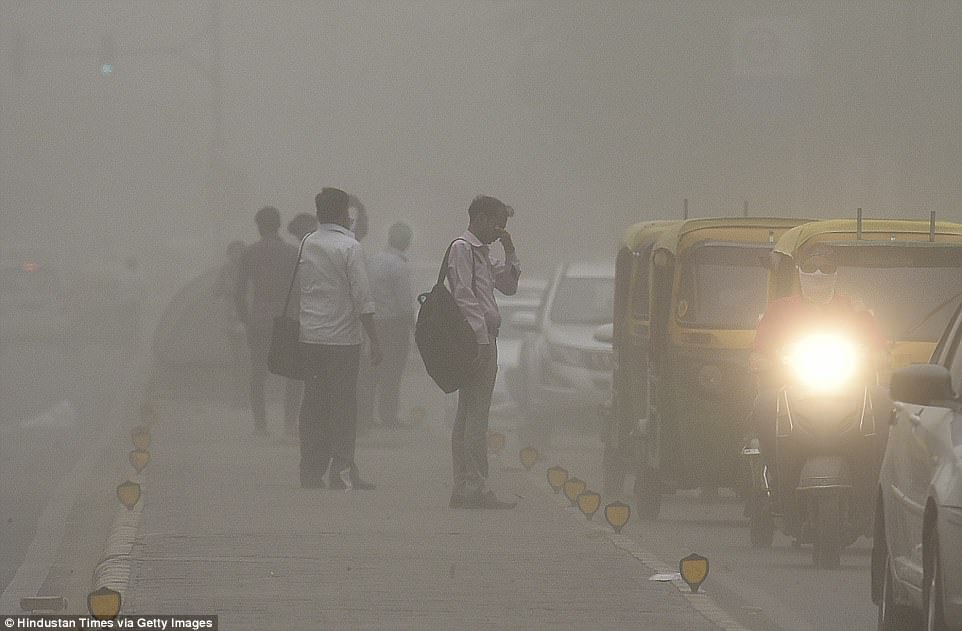 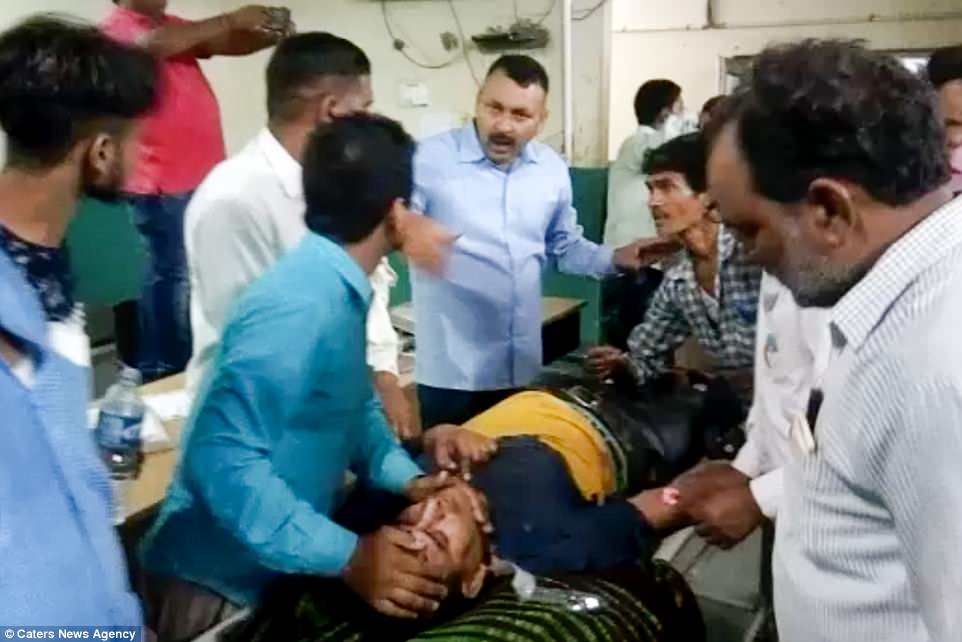 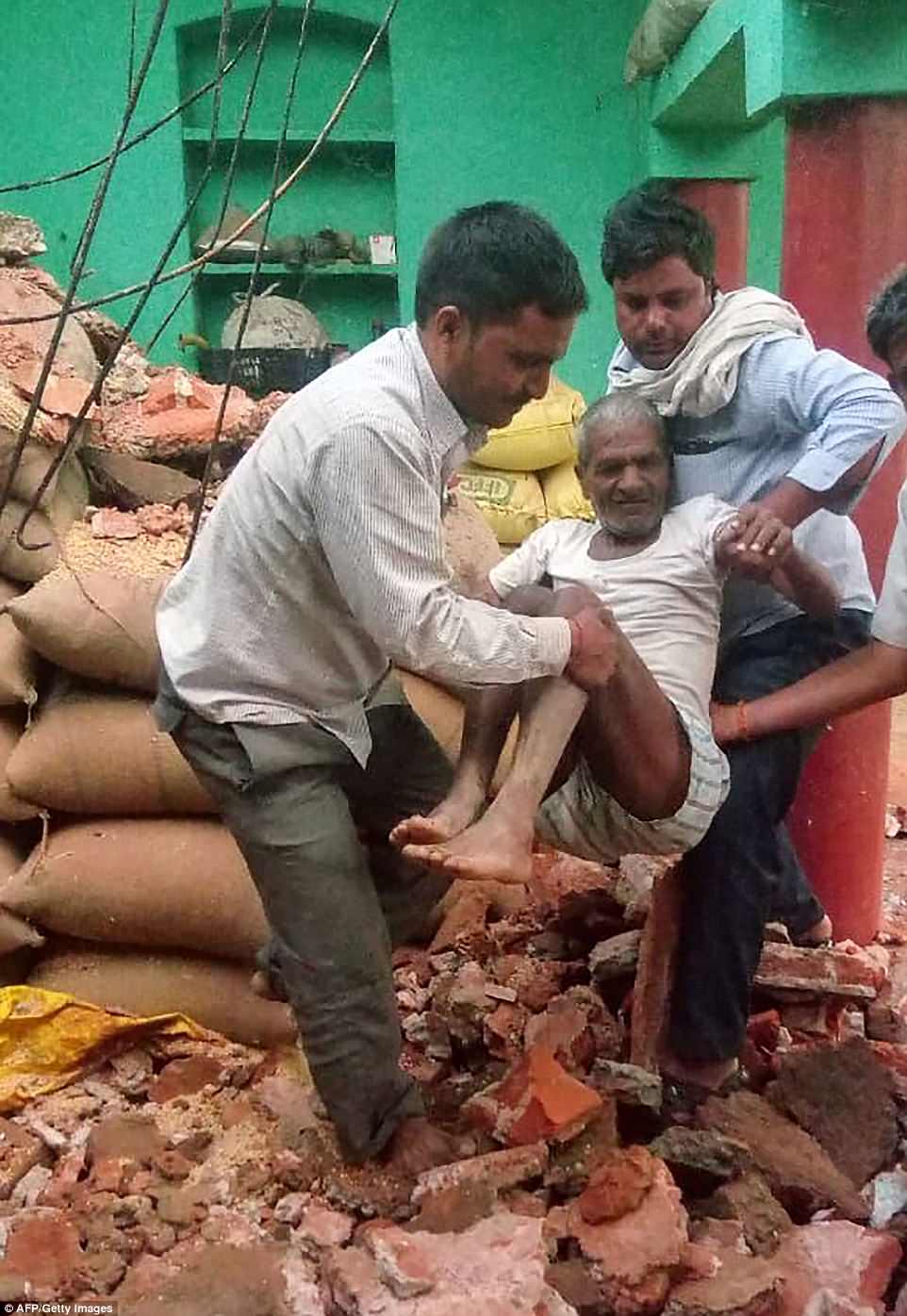 A an is lifted from the rubble of his own home after the storm destroyed the house in Agra, Uttar Pradesh on Wednesday night 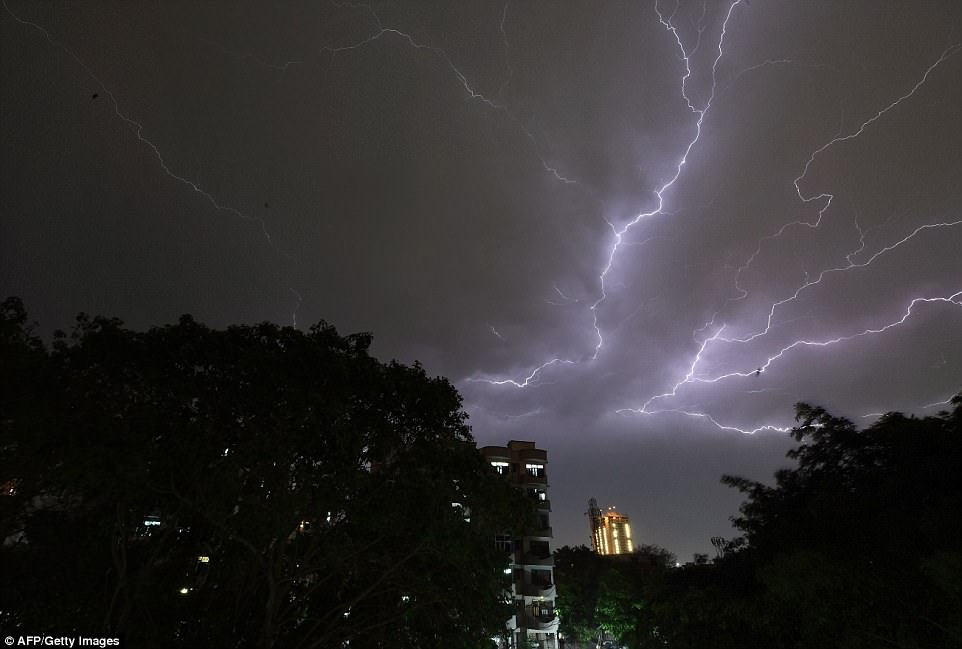 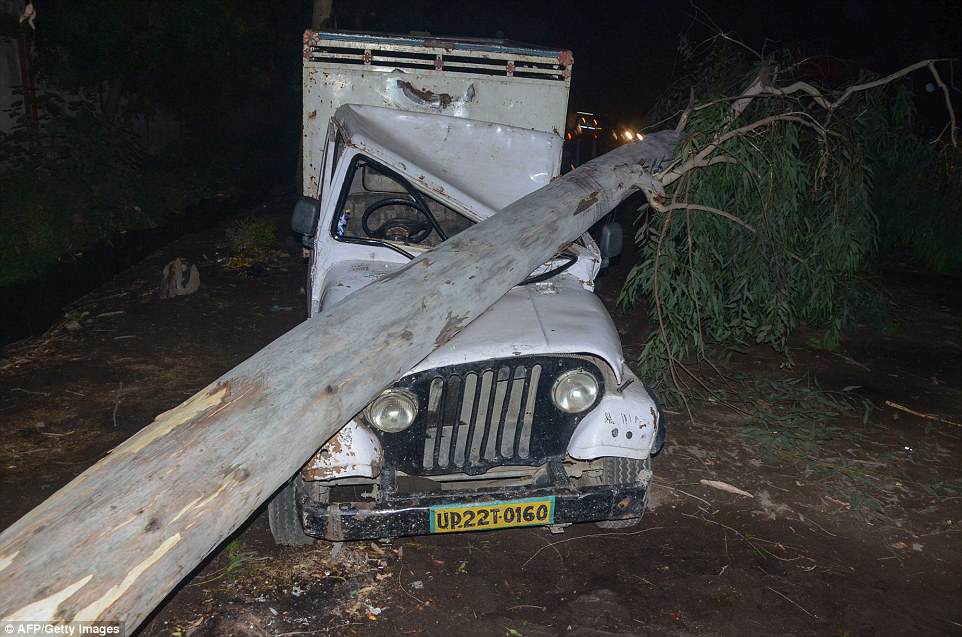 Hemant Gera, secretary for disaster management and relief in Rajasthan, told the BBC the storms were ‘the worst he’d seen for 20 years’.

‘We had a high intensity dust storm on 11 April – 19 people died then – but this time it struck during the night so many people sleeping and couldn’t get out of their houses when mud walls collapsed,’ Mr Gora said.

‘We can confirm at least 46 deaths, 41 injuries from around 40 of the state’s 75 districts,’ T.P. Gupta of the Uttar Pradesh relief commissioner’s office told AFP.

The Agra district of Uttar Pradesh, home to the Taj Mahal monument, was one of the worst hit, according to media reports.

There were 46 confirmed deaths in Uttar Pradesh in the north and 31 in Rajasthan to the west.

The local government in Uttar Pradesh government has reportedly sounded an alert for the next 48 hours. 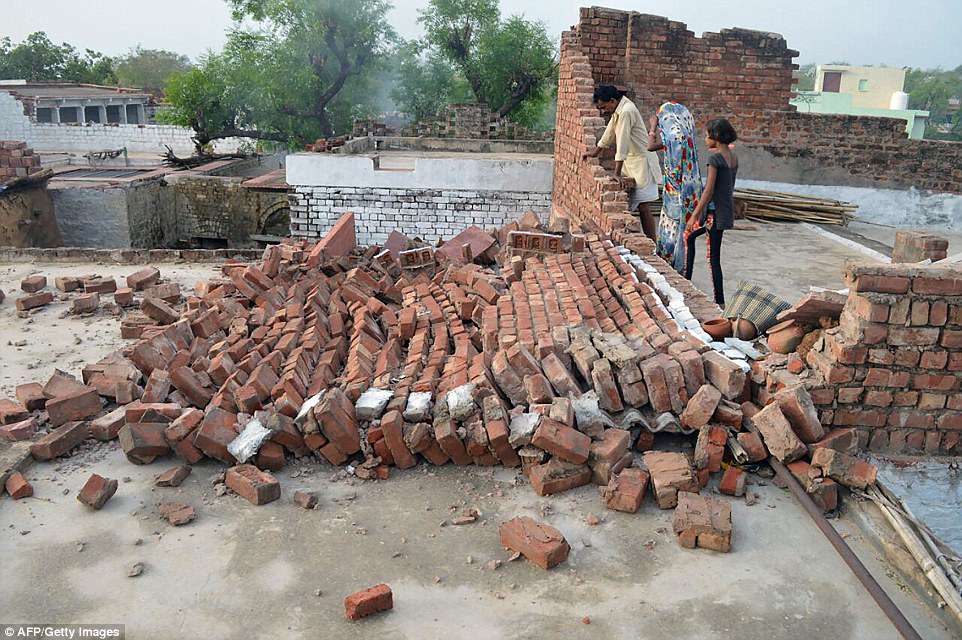 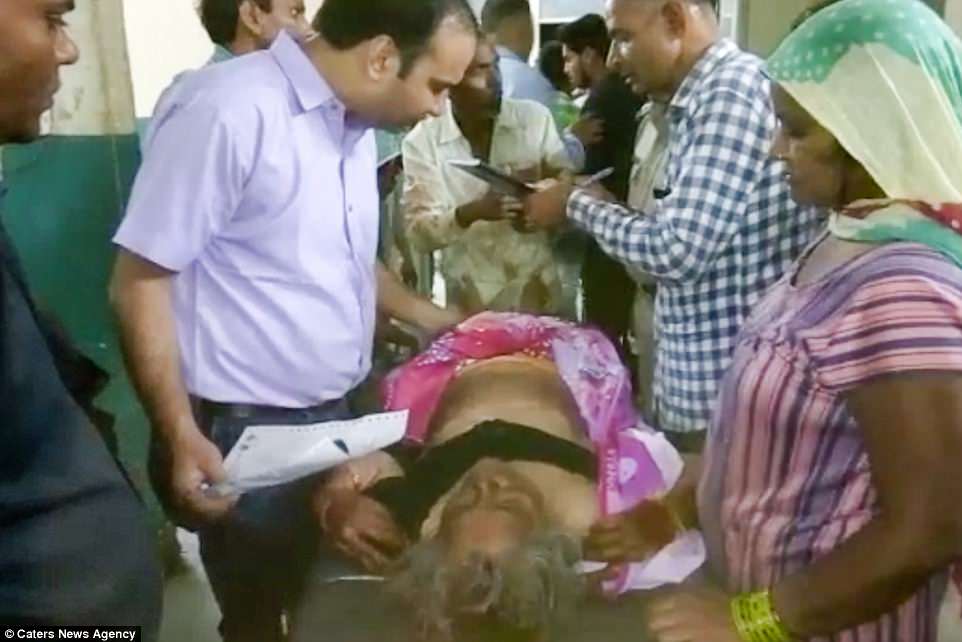 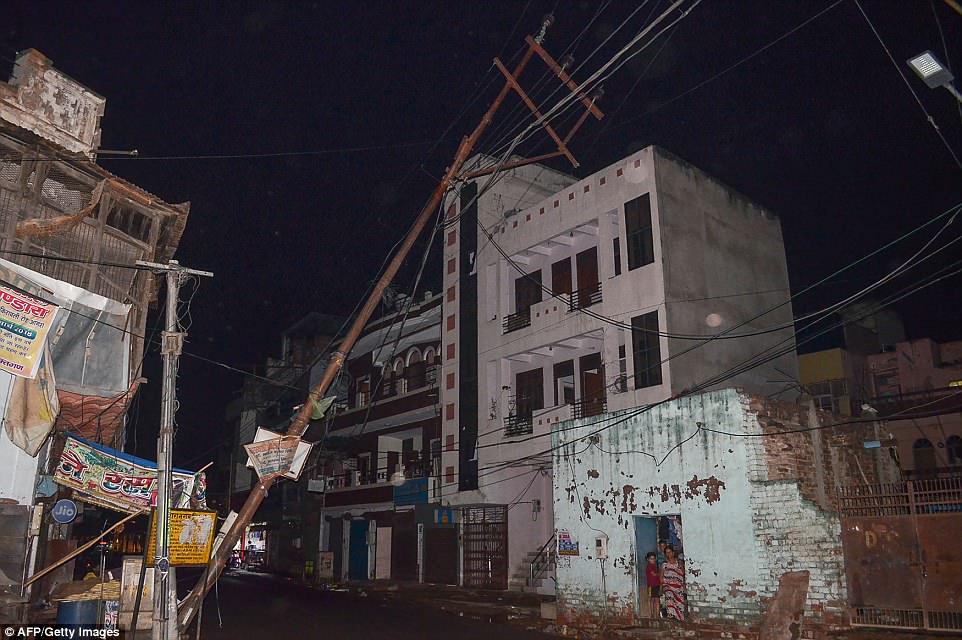 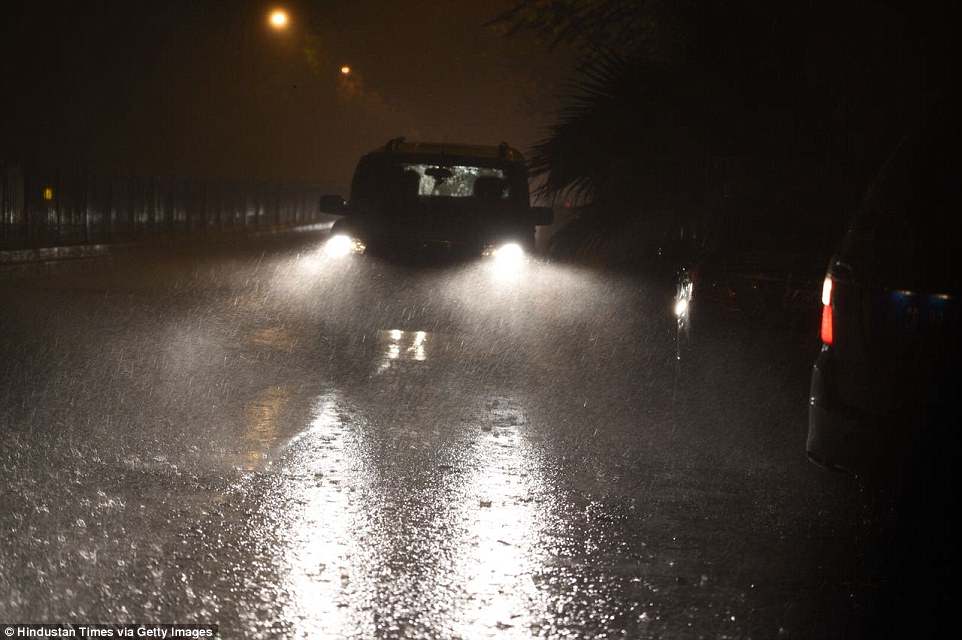 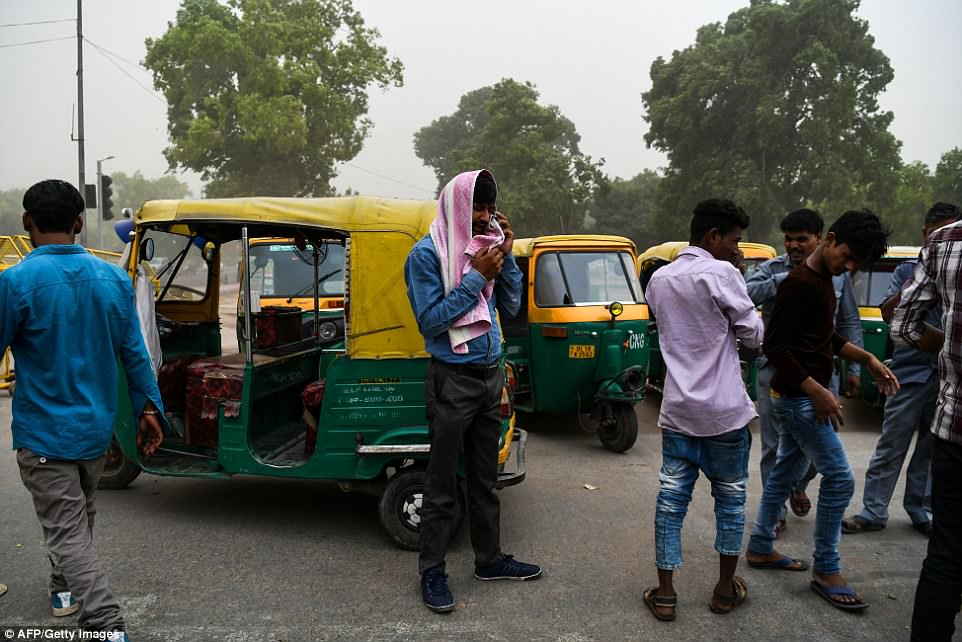 The storm also hit the capital Delhi, more than 100km (62 miles) away, along with heavy rains late on Wednesday evening.

A dramatic video, posted on Twitter, showed a thick layer of dust blanketing the Delhi skyline – hundreds of miles away from the centre of the storm.

‘Saddened by the loss of lives due to dust storms in various parts of India. Condolences to the bereaved families. May the injured recover soon,’ he tweeted.

‘Have asked officials to coordinate with the respective state governments and work towards assisting those who have been affected.’ 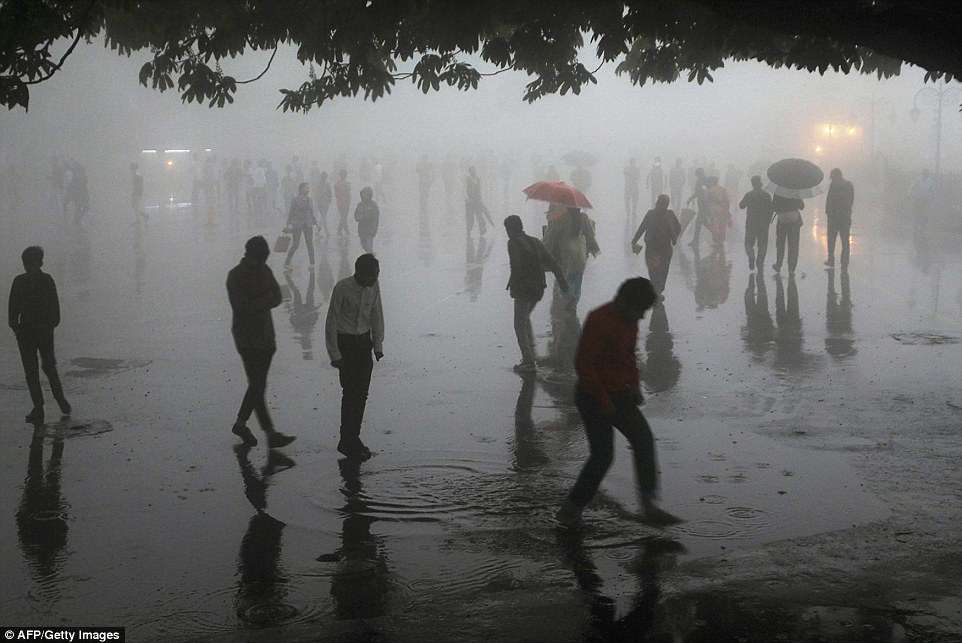 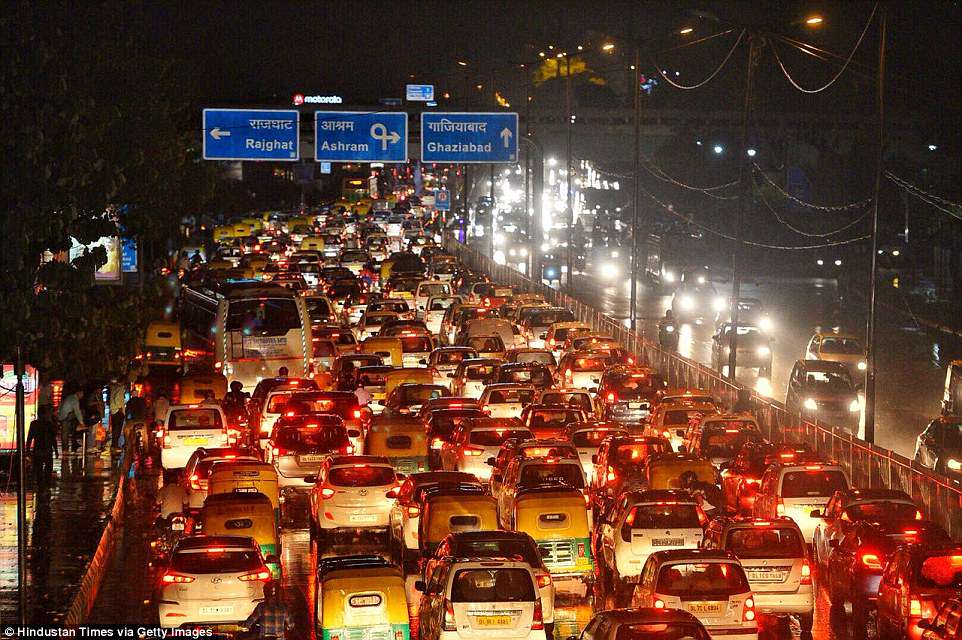 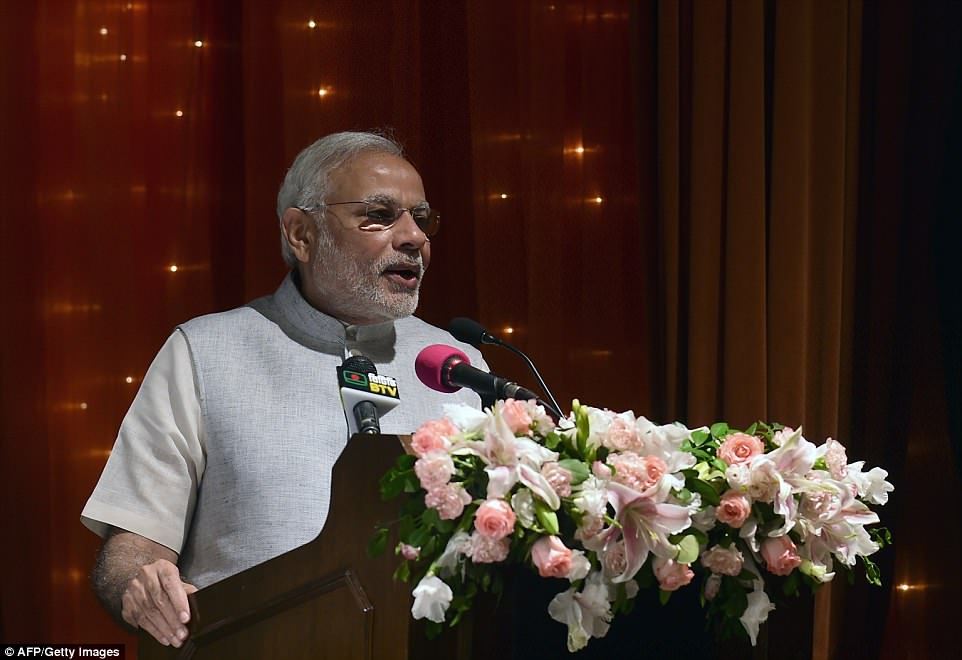 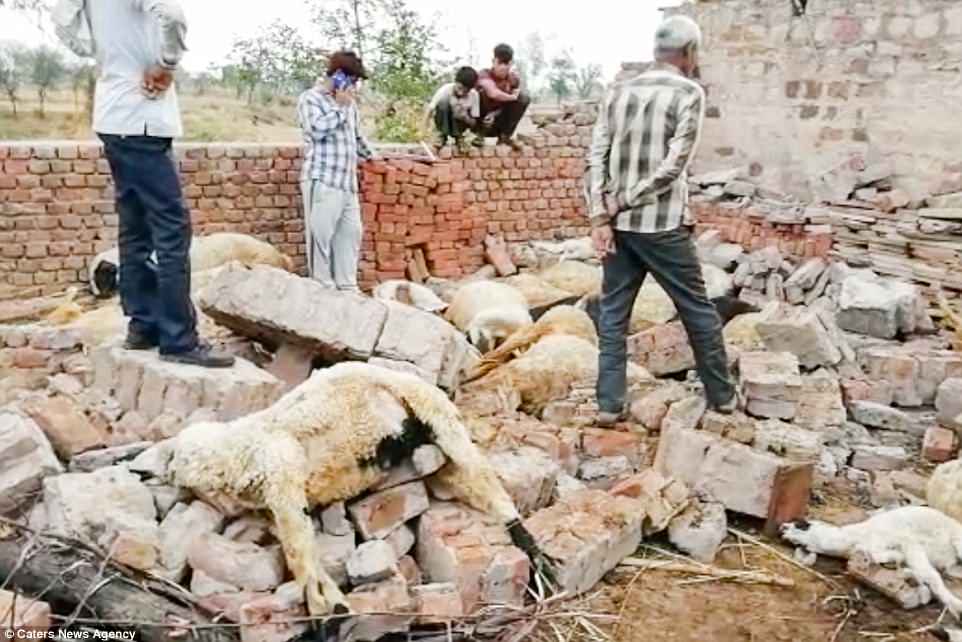 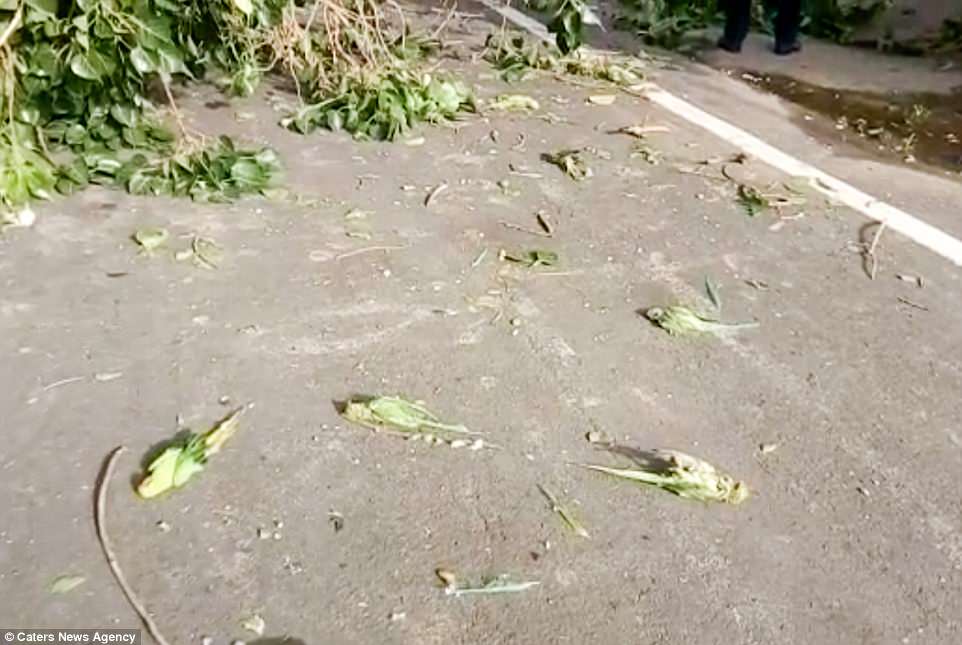 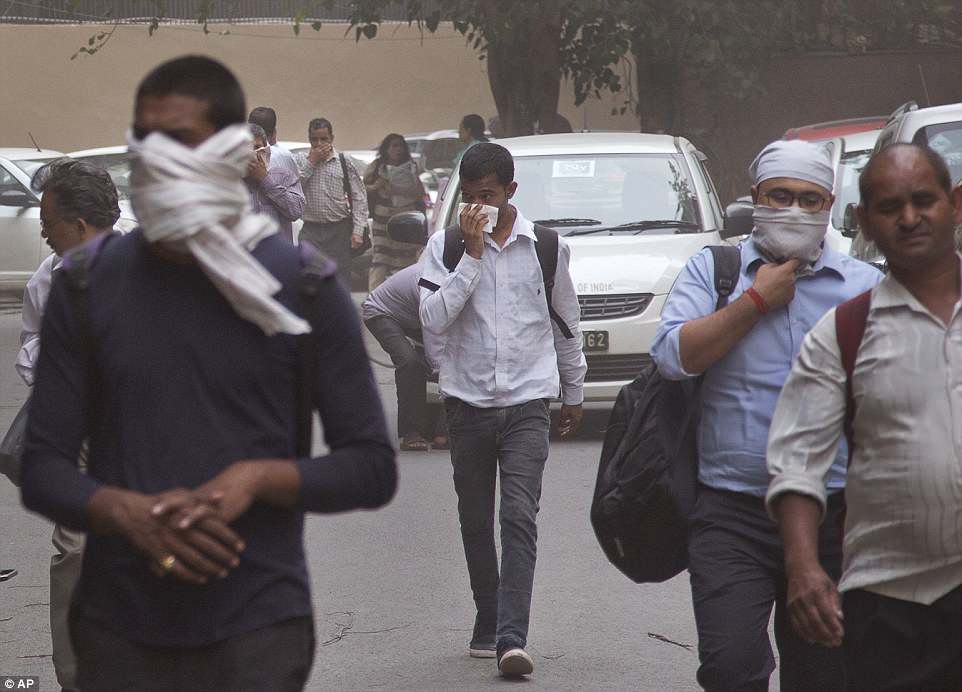 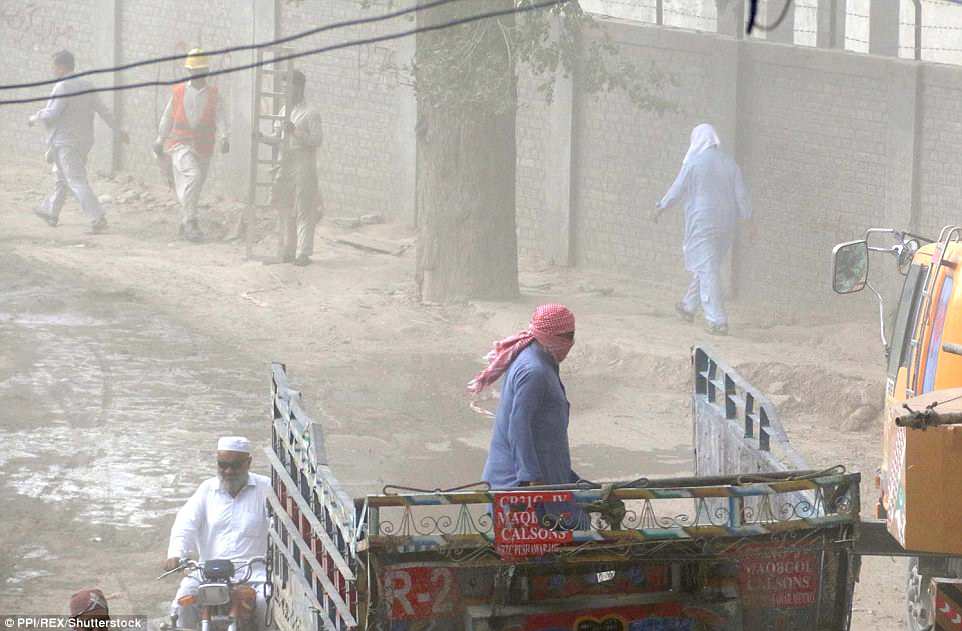